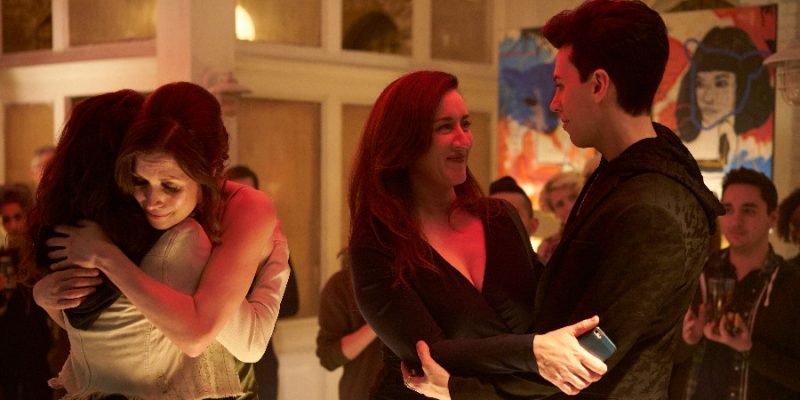 Powerful and difficult decisions have to be made as our Clone Club nears it’s final destination on this last journey, and “Guillotine’s Decide” brings us a story of love, family, and the ultimate sacrifice. We all knew that this last season would cause heart wrenching and nervous break down moments, but this episode really punches the viewers in the gut. With only two episodes left, this episode has to set the Sestra’s up for the big showdown that is inevitable. Though it’s a beautiful story of family and love, it’s also one of sacrifice. Filled with genuinely happy and satisfying moments for many characters, it also brings us the this season’s first major causality. Not taking away anything from MK, she was a beloved clone in this wonderful club. But tonight’s causality is one that will hit you right in the feels.

Immediately following the trauma of the last episode, Rachel is whisked away and emergency care is given for her badly damaged eye socket. She’s out of PT’s reach, for now anyway, and under the care of Ferdinand. No wonder she didn’t want to share that “secret informant” with Sarah, because damn Sarah would not have been able to handle that. Not that S wanted to work with such a horrible person either, but sometimes you have to step back and get things done. Delphine and S meet with Rachel and Ferdinand to plead their case against Neolution. They want to make the information public, expose Neolution for what they really are and watach them burn to the ground. Ferdinand is more interested in exploiting the board and gaining more money and power by using the information that they have. Though what Delphine, Felix and Adelle discovered is a gold mine of relevant information, they need Rachel to be the smoking gun that proves all their claims legitimate. 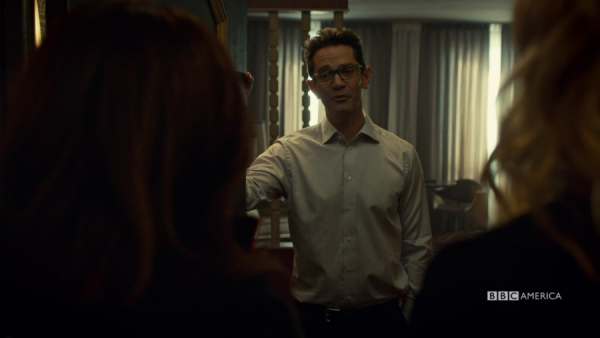 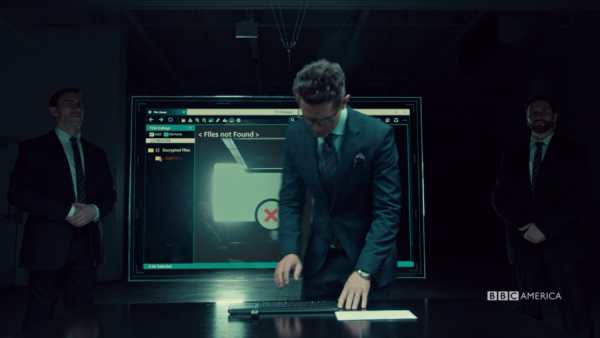 Though it’s unclear at first what Rachel feels about the matter, she eventually makes a decision, throwing Ferdinand under the bus. She gives S the file that has names, dates, payments, bribes, and payoffs to Neolution for their horrible deeds, but pretends to give it to Ferdinand. She just wants to live off her nest egg, disappear and enjoy the rest of her life free. She’s worked so hard all of her life to be treated as an equal, and she was still played by Neolution. Her happiness will lie in seeing them exposed for what they are and living her life how she wants to. She send Ferdinand to the board meeting thinking that he has the blackmail necessary to coarse the board into what he wants. Only to realize that the files just aren’t there. Unfortunately, he makes it out alive, which means bad things for the rest of the group. He attacks Rachel, but doesn’t kill her and Rachel then warns S that he made it out alive and she should be prepared. But come it, it’s S we’re talking about, she’s always prepared. 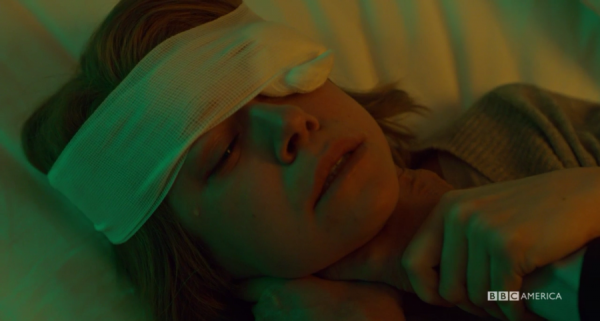 Helena is still in hiding, and though she doesn’t trust Gracie, she hasn’t yet sent Gracie away either. Her babies are the closest thing Gracie has left of a family and Helena has a special bond with her. Gracie covers for Helena, but still makes the mistake of calling Mark from a cell phone she’s got hidden away in her bag. Helena finds out and is about to go all Helena on her, but instead she tells her to pack a bag, because they have to go. Sadly, they weren’t quick enough though. Of course Coady and Mark traced the phone call that Gracie placed, and now Helena is in trouble. Gracie has proved herself un-loyal to Coady and Westmoreland, so she’s shot in the head before Helena is dragged away. 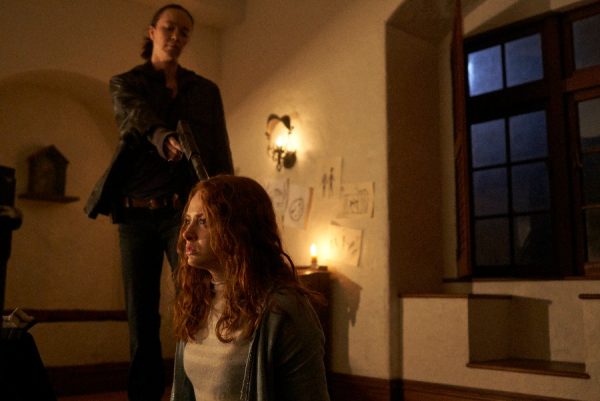 The main portion of “Guillotine’s Decide” revolves around Felix and his art opening. Sarah, being Sarah is paranoid about their escape with Kira from Dyad. But S insists that they take the day off and support Felix with his art show. She is fairly insistent that they deserve to take a break for a day, and they shouldn’t be that worried right now. Rachel is Neolution’s main target today, as she is the one with the most power to turn on them. S and Delphine are both acting secretive and oddly, but everyone else is prepping for Felix’s party so Sarah has no choice but to help.

The art show is a smashing hit, thanks to some help of the Clone Club and women in Felix’s life. He is nervous about impressing a particular gallery owner, but once the party gets going it’s quite successful. Each of the clones gets their turn being introduced to the crowd and mingling through. Making the art come alive on an entirely different level. People are purchasing, Delphine of course purchasing the Cosmia inspired piece, and at the end of the night Felix gives a touching speech about S and his hood-rat sister Sarah.

My sister and I are orphans, you see. And we could have ended up anywhere. We could’ve ended up in any family, and if we had, we would have been entirely different people. But my mum, Siobahn, this woman, she chose us as her own. We are who we are because she carried two little London urchins on her wings to Canada. Watching her raise my sister, watching my sister raise her own daughter, finding my biological sister, it’s quite mad. It’s taught me that we are all mysterious works of chance. Of choice. Of nature verse nurture. So to my galaxy of women, thank you for nurture.—Felix

And here is where things get a bit tricky. Ferdinand isn’t happy about being sold out, he knew that Rachel sent him in there to die. He also isn’t particularly happy that Rachel gave over the materials he needs to S and Delphine. Delphine has already made secure copies of everything and is uploading them to a secured sharing site, available for all of her journalist friends and media relations contacts. This is a huge step for them and their fight against Neolution. They’ve never been the biggest army, but this small and fierce team have just accomplished a huge task against a much larger corporation, and it’s a big step in all the clone’s freedom. 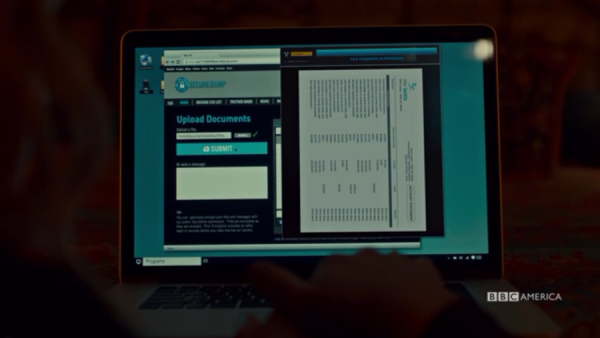 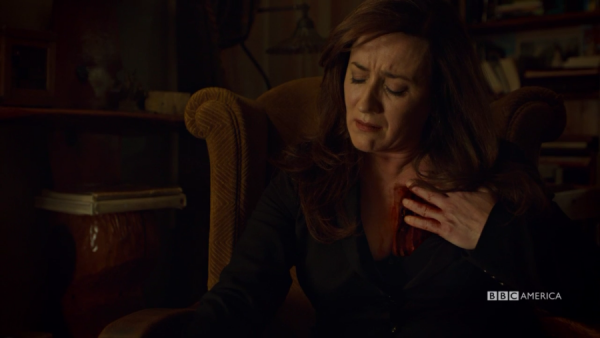 Ferdinad though, is a special kind of evil. Something that we all knew already, in this violent way he murdered MK. Mrs. S thought that she was prepared to handle him and leaves Felix’s show after the tip off from Rachel. He’s of course destroyed the downstairs, tearing the place apart looking for those files. I think that he would have shot her regardless, but he really is even more unhappy when she tells him that Delphine is already releasing them to the public. The clone club had no greater protector than Mrs. S, she was always there for her “chickens” and immediately adopted all of the clones into that same circle. She doesn’t go down without a fight though, and is able to bring Ferdinand down with her. But this is a loss that will weigh heavily on the rest of the team. Especially at a time when they will need to step up to the plate and put everything on the line to save another of their own.