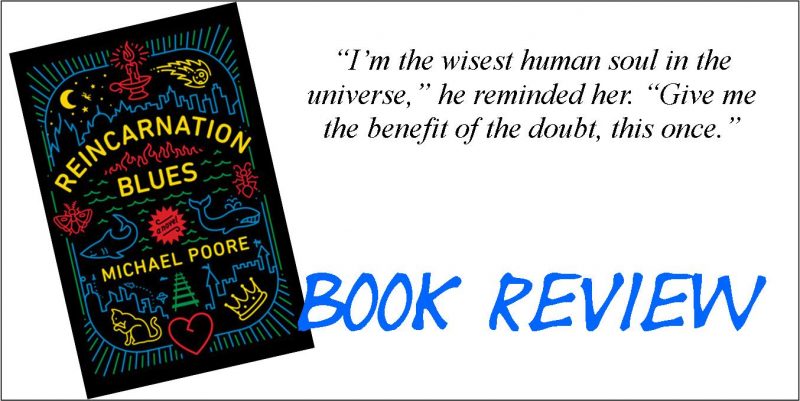 Envision your life. Think back on everything you’ve done. Here, I’ll give you a minute. (imagine the music from Final Jeopardy playing.)

Got it? OK, what have you done that was perfect? Self-sacrificing, completely unselfish, humanity-saving? 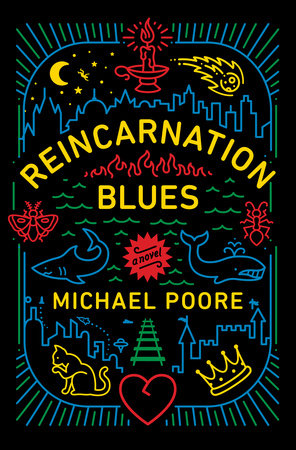 Reincarnation Blues, a brand new novel by Michael Poore, digs deep into this theme – what is a soul? How does a person move on from the mortal and earth-bound? What exactly is perfection? Can you achieve it purposefully? This is probably the best book I’ve read recently – and I really recommend that you pick it up too.

Milo is a soul, floating through thousands of years of Earth’s history, both past and future. He’s nearing the last of the 10,000 lives that the universe grants to any soul, in order to achieve perfection and move on, in a spiritual sense. Milo has been everything and everyone, from an oddly wise surfer and sometimes-fisherman, to a potential serial killer, to a follower of Buddha (the actual Buddha), to a character in more than one (what we would call) sci-fi story. Following his death in each life, he’s pulled from the river by his two soul guides, Mama and Nan. Oh, and he is in love with Death, who prefers to be called Suzie, and spends his days between one death and the next reincarnation with her, hiding from Mama and Nan in order to have a few stolen hours with his love.

Four times, Milo had been executed and had therefore known in advance the exact hour he would die. He had been burned at the stake in Spain, beheaded in China, hanged in the Sudan, and gassed in California. Knowing death was coming, you could usually manage to act brave. But it was just an act. Inside, it felt like someone was working on you with a plunger.

What is perfection? Why is it necessary? Can it be achieved consciously? Can you plan to create a perfect moment, or does the planning negate the selflessness portion of the requirement?

There were, he knew, many ways a soul could reach Perfection. After eight thousand years, he had tried them all. You could love, you could become some sort of savior, you could achieve a great peace or teach something new and powerful. But one of the most successful, if your soul was old and wise enough, was the hermit thing. You tortured your inner self with isolation until – pow! – one day it turned into some kind of sun or soul diamond, and – poof! – off into Perfection you dissolved. Trouble was, it was enormously unpleasant and hardly anyone could pull it off. Sooner or later, most souls crawled to the nearest village and starting wolfing down baloney and pinching college girls, and that was the end of that.

Who are you, exactly? Inside, the real you, is it this body and this personality you currently inhabit? Or is who you really are someone completely different, and findable, over and over? Can your soul launch itself into diametrically opposed beings in successive lives – a rich, powerful, despotic ruler once, and a kind, humble peasant another time? And will you only find yourself as a human? Milo has been bugs, sharks, and other creatures – long lives, short lives, self-aware, and not so much. But he always returns to who he really is, and once he returns, he quickly remembers that he and Suzie love each other, in a way that transcends cosmic forces and universal job descriptions.

Poore’s language is simple, frequently very funny. The book is a fairly quick read – I picked it up from the Random House booth at SDCC, after asking them what was upcoming, new and noteworthy, and read nearly all of it on my plane ride home. But, like Milo’s lives, the quick read is deceptive – mixing profound philosophy with beautifully drawn characters and several longer, novel-in-itself life stories. The questions the book raises have stayed with me, floating around, like Milo in the river of reincarnation, bubbling up at unexpected moments. Do I live my life for myself? Of course I do. But do I also see some outward-directed, other-focused behavior? Should I be working more toward soul perfection? Should we actually be working toward that, or does it come from lessons internalized over thousands of years?

Once in a while, Milo remembers some of his previous lives. Sometimes, he barely knows he has a name.

‘Love’ said Suzie, and ‘in love’ aren’t always the same thing. ‘In love’ is a human thing. Chemicals. ‘Love’ is cosmic. I love you, too.

She took his hand, and some love traveled up his arm and burst inside him like a galaxy. For a moment, he contained wonders and stars and time, and could speak Spanish, and existed in twenty dimensions. He also began to explode a little.

Many lives are quick sketches, a couple of paragraphs, as significant as that life is. Several lives are as long as a short novella, and could stand alone – the author is an award-winning short story writer. And one of Milo’s final lives is told in a story that you’ll be wishing was a sci fi novel in itself. Set far in the future, the world rivals that of one of my other favorite authors, Pierce Brown, in his Red Rising series. I don’t doubt that you’ll wish, like I do, that you could run and find a whole series based on this story (and if you do wish that, please go find Red Rising and read it). What happens between many of Milo’s lives are fascinating stories in themselves. Juggling is important – actual juggling, not the kind that us busy people do. Candlemaking is important, too. As are longing, loneliness, and hard-won wisdom.

You may believe in Heaven and Hell; you may believe that death is the end, the finality. Whether either is true, or whether there’s a completely different reality awaiting us, none of us really knows. Unless you’ve come back 10,000 times, and have some faint memories of what has happened. But the message of Reincarnation Blues, instead, is that we should consciously be attentive to what happens, what effect we have on the world around us, what effect the world around us has on you. Pay attention. Love. And read Reincarnation Blues.

A wildly imaginative novel about a man who is reincarnated over ten thousand lifetimes to be with his one true love: Death herself.

First we live. Then we die. And then . . . we get another try? Ten thousand tries, to be exact. Ten thousand lives to “get it right.” Answer all the Big Questions. Achieve Wisdom. And Become One with Everything.Milo has had 9,995 chances so far and has just five more lives to earn a place in the cosmic soul. If he doesn’t make the cut, oblivion awaits. But all Milo really wants is to fall forever into the arms of Death. Or Suzie, as he calls her.More than just Milo’s lover throughout his countless layovers in the Afterlife, Suzie is literally his reason for living—as he dives into one new existence after another, praying for the day he’ll never have to leave her side again.

But Reincarnation Blues is more than a great love story: Every journey from cradle to grave offers Milo more pieces of the great cosmic puzzle—if only he can piece them together in time to finally understand what it means to be part of something bigger than infinity. As darkly enchanting as the works of Neil Gaiman and as wisely hilarious as Kurt Vonnegut’s, Michael Poore’s Reincarnation Blues is the story of everything that makes life profound, beautiful, absurd, and heartbreaking.

Because it’s more than Milo and Suzie’s story. It’s your story, too.

Michael Poore’s short fiction has appeared in Glimmer Train, Southern Review, Agni, Fiction, and Asimov’s. His story “The Street of the House of the Sun” was selected for The Year’s Best Nonrequired Reading 2012. His first novel, Up Jumps the Devil, was hailed by The New York Review of Books as “an elegiac masterpiece.” Poore lives in Highland, Indiana, with his wife, poet and activist Janine Harrison, and their daughter, Jianna.