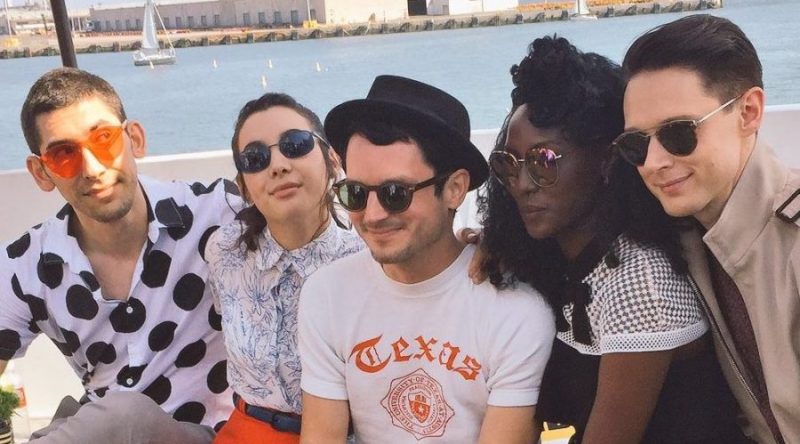 Welcome back to our continuing series of interviews with the cast of Dirk Gently’s Holistic Detective Agency from SDCC 2017!  In case you missed it, you can catch up on our interviews with Mpho Koaho and Fiona Dourif, and with Elijah Wood and Samuel Barnett after you finish reading this!

Today we look back at our talk with Hannah Marks (Amanda Brotzman) and Jade Eshete (Farah Black), who, along with Fiona (Bart Curlish) make up the trio of kickass women in Dirk Gently.  We didn’t get a lot of time with these two – or maybe their combined energy during the interview made time speed by – but their love for the show, their characters, and what they can’t tell us about season 2 is very evident.

This is quirkiest show!

It must have been a treasure getting those scripts. What was it like getting the Season 1 scripts?

Hannah: I had to read them probably three times every time we got a script, because I had to understand everything that was happening. Max is so complex and layered in his writing, and it’s an honor to get to do his material. But you definitely have to read it three times.

Jade: Yeah! I just finished reading the last episode of this season –

Hannah: No spoilers for you!

Jade: I won’t do it! But, what I will say about reading the scripts is there were times I literally had to stop myself. I would see things on the page, like I would see something on the next page, and go, no no no, wait, stop, slow down, you’re only on this page, don’t .. you always feel the need to jump ahead because it’s so exciting!

Hannah: Also, Max writes in this giant font, so it’s like, this is a bad example, but THE PERSON IS HUMAN SHISHKEBABBED. Or whatever.

Hannah: THIS big. So you have to scroll ahead. It’s really thrilling.

You can’t tease anything in the next season.

Jade: We can talk about certain things in the next season.

Can you talk about what was the most bizarre, quirky thing you found yourself doing in Season 2?

Hannah: I can’t… everything in my story line is a spoiler, but I’ll talk around it. I have a scene partner who also has an actress who plays her hands. And one of the actresses who plays one of her hands missed her flight, so I’ve been shooting with a character who has one hand. Just an example of the type of world we’ve been working in. Super unique and always with a new kind of creature or character.

Jade: Yeah, for me, I’ve got to talk around it, sorry. There was one scene where Sam kind of talked around this yesterday, where it’s a huge amount of people, the largest amount of people I think we’ve ever worked with, and the things that transpire within this group of people are pretty gnarly. I think that’s the only thing that I can. The things that happen there and the way it ends are kind of … I would never have thought that I would be doing. It makes no sense to you, I’m sorry.

Hannah: Things that have never been seen before on a television show, the fact that we go to this world called Wendimore. That’s the main thing that we CAN talk about. It’s basically Dirk Gently’s Narnia. Totally magical land with fantasy creatures, which is not something we had last year.

Hannah: So we change genres completely.

Dirk Gently is a hard show to explain, so quickly, for people who haven’t found Dirk Gently yet, what would you say since the second season is going to premiere, and why is now a good time to get into it?

Jade: I would say, um, what Dirk means for me. I thought about it this morning. If I wasn’t on this s how, would I watch this show? Is it a show that I would necessarily tune into? I thought about my friends who run the gamut, actors, non-actors, whatever, and now that it launched today on Hulu, my friends are all like, “I’m watching it on Hulu! It’s so awesome!” And they’re all from different walks of life, loving the show, they’re seeing what I saw from that first pilot episode. Dirk, I think, gives people permission to celebrate their weirdness, celebrate their oddities. These are things I think we try to hide and not really embrace, and so I think Dirk pretty much showcases these, and says Here are all these weirdos and they’re the leads of this show, and they’re amazing. It gives them this confidence and this … I don’t know, I feel like people are really empowered when they watch Dirk. So that’s what I would say to people who haven’t really seen it as yet. That’s what they will really connect with.

Hannah: Like Jade said. We just watched this fan video on Youtube that said, “all of the main characters on Dirk Gently are losers and I LOVE IT!” That’s really cool, we would normally be the outcasts or the side characters on any other show, but on this show, we get to save the day. And in very broad ways, everyone is very imperfect. But in many ways, this show has made me grow as a person, and discover new things about myself, so I hope anyone watching will also see that. Beyond that, I do think we are the weirdest show on television. ESPECIALLY second season, I can’t tell you how… I wish I could tell you. So if you want to watch something that’s different and original and subverting all the tropes that you would normally see, then this is the show.

Jade: And I think something about season 2 is that we’ve got so many new characters coming into the mix, and the same that I think you fell in love with the characters that were introduced in season one, their storylines and characters are so interesting that you immediately are immersed.

For today’s bonus content, here’s Hannah talking about how she prepares for Amanda’s fictional disease.

.@HannahMarks tells us how she prepared for portraying a fictitious disease and avoiding CERTAIN DEATH in the process. #DirkGentlyBBCA pic.twitter.com/QuT7bJAgXC

Make sure you subscribe to ThreeIfBySpace.net to keep up on all your Dirk Gently news and follow us on twitter @ThreeIfBySpace. Season two of Dirk Gently’s Holistic Detective Agency premieres this fall on BBC AMERICA.