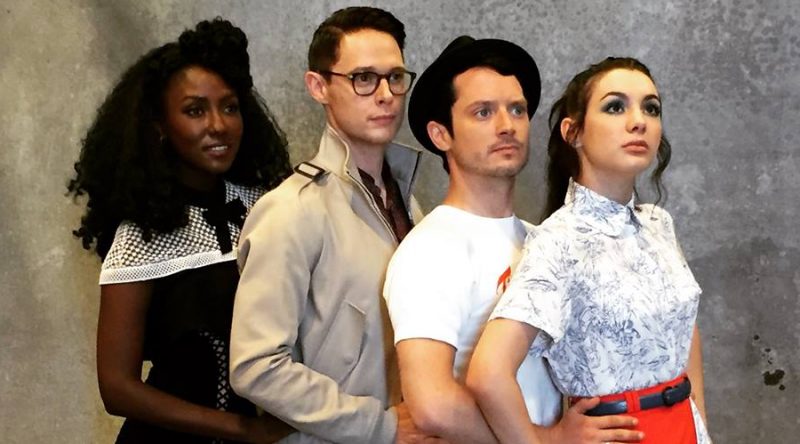 Last week we shared with you our interview with Mpho Koaho and Fiona Dourif from Dirk Gently’s Holistic Detective Agency while at San Diego ComicCon.  This week, we here at ThreeIfBySpace.net are giving you an exclusive look at the transcript from our interview with Elijah Wood (Todd Brotzman) and Samuel Barnett (Dirk Gently).

Q:  Were you blown away by the scripts for season 2?

Samuel: Actually more so even than season 1. In season 2, the characters are deeper and richer, the storylines are crazier, but easier to follow. It’s where we all go, who we all become, the journey we get to go on because it’s slightly longer with 10 episodes. It’s even deeper. It’s great.

Q: You’ve both worked with some geniuses in your career. How would you describe working with Max Landis, with the lines and situations he give you to do?

Elijah: And he’s brilliant. He’s really brilliant. I’ve never met anyone like him, I don’t know anyone who has a mind that works the way his works. And for us as actors, we could talk about this on so many levels, but simply on a character level, he’s written really rich characters with extraordinary dialogue. He makes it so easy for us. He does so much of our work in a way.

Samuel: It’s all on the page.

Elijah: It’s there. There’s a rhythm to the way that writes dialogue that I’ve never encountered that I find really challenging and fun. In fact, if you follow that rhythm, it feels like the voice of the character.

Samuel: He writes, this is going to sound weird, but he writes Dirk as a British man. It’s really distinctly different in the words he uses to the American characters. It really is. It’s like a British writer’s written it.

Elijah: Except for in this new season. But it feels like the show, Dirk Gently’s Holistic Detective Agency, is, and it felt like this in the first season, but even more so now that we get to go back and continue exploring the characters in new scenarios, it’s a big sandbox for him. It’s a creative sandbox. Where BBC America has given him license to explore his imagination. And we get to articulate that. That’s really what we’re doing. And it’s wonderful. It fills him with no end of enthusiasm, but everyone else working on the show. The art department to the costumes to us as actors getting to fulfill these things. We’re all working in this ridiculous, really fun sandbox that is of Max’s mind.

Q: This is a little deeper than maybe this show is…

Q: but both of these characters exist in emotional isolation.

Q: What is it in each other that your characters need? What is it that Dirk needs from Todd, and what does Todd need from Dirk?

Samuel: You need a friend.

Elijah: I need a friend.

Samuel: It’s interesting. But to say that Dirk needs friends, well, that could be anyone. But what leads Dirk to Todd originally is, the mystery in Season 1 is Dirk has met his future self, and the future self says you need to go and find Todd Brotzman. Why the universe has led him there, who knows. But I think they do need each other, like … it’s easy to see how Dirk has transformed Todd’s life and opened it up.

Samuel: But what Todd gives Dirk is emotional grounding, and reality, and friendship. Without that, Dirk has no sense of himself. He’s been used his entire life for this skill. And Todd’s the first person who’s actually seen a person behind that.

Elijah: Yeah, and a lot of what we establish in the first season in regards to Dirk’s methodology is the universe just pulling us in. This means something, I have no idea what, but it will turn out to mean something. And ultimately that leads to most of the answers, but there’s also problems there. Not everything is going to result in something positive. So what you start to see in Season 1, but definitely becomes a thing with Todd in Season 2 is trying to get Dirk to not always just accept what’s happening in front of him, but take a little bit more action and control of his life and his choices, being more conscious of those choices, rather than just kind of letting the universe be a slipstream that could lead to dangerous things. So that’s the help I think that Todd provides.  And Dirk has opened Todd’s life up, but also the emotional truth of Todd, which is, he’s kind of shunted down his entire life, which are these choices, these horrendous choices he’s made as a young person, that has put him in a terrible relationship with his sister, and has put him in the worst possible place of his life. And he’s trying to atone for his own choices and be a better person. And he has given him the opportunity for that, and to a certain degree, he’s the first person that has seen him as, seen Todd as a vulnerable human, and that’s definitely there.

Samuel: They really see each other. And they both feel heard and seen by each other for who they are. And in Season 2, it’s great, because they have a kind of role reversal where Todd is utterly onboard with Dirk’s way of thinking, and Dirk is having a total crisis about the way his life works, because everyone keeps getting hurt. And he’s like, “well this totally doesn’t work, so I’m not doing it anymore.” And so they have to find their way through that. And ultimately, their friendship has cemented and deepened.

Q: Dirk Gently is a hard show to describe…

Elijah: Yeah, it is!

Q: It’s available on Hulu now, the first season, and the second season is premiering in the fall. What would you say to people who haven’t found Dirk Gently yet? Why should they watch the show?

Samuel: I’m using a fan of the show to answer that, who put a thing on line titled, “Every Character on Dirk Gently’s Holistic Detective Agency is a Loser,” and it’s awesome. Because I watched that, and it’s an 8 minute video, and he goes through, forensically, the emotional life of every character. And you do come away going, that’s what Max has written. He’s written people who really struggle emotionally with themselves and are quite dysfunctional, and have shame and guilt, and a back story, and yet every day they’re struggling to get up and atone and make things better for themselves, and other people. And if that’s not a reflection of what people do in their lives quietly, and normally, really being human, then I don’t know that is. And you’ve got kind of a really brilliantly and purposefully written crazy story line involving time travel and body swapping. What’s not to watch?! And then Season 2 goes into this high fantasy genre with magical worlds and magic and knights and magical creatures and whatnot. And again, what anchors it is the emotional lives of these characters and the struggles that they have. I just love that now we’re allowed to write characters and be able to show that on TV. You know, diversity is about everything. It’s also about emotional diversity, about people recognizing themselves in characters on TV, going, “Ah! They’re not perfect, and I’m not perfect. Oh great, it’s ok to be me.

Elijah: Yeah, even the one who’s letting the universe magically guide him is imperfect.

Samuel: And the show basically says, listen and trust your gut.

Elijah: It’s so true. And in the midst of that, it’s really fucking fun.

Q: You both come from fraternities, you (Samuel) with the History Boys, and (Elijah) with Lord of the Rings. As you pursue other roles, talk about those friendships, and how important they are and how they sustain you.

Elijah: Well, look, I can only speak to my experience. Lord of the Rings was almost like going to university…

Elijah: It really was, so …

Samuel: It was formative, something you don’t get not going to uni,

Elijah: And it was a formative life experience, as a result of that. I was 18, when I went to New Zealand for the first time, I was 22 or 23 when we finished. So it really was this very profound life experience, living away in another country with all of these people who became family. And a foundation of my adulthood. Rather than the kind of film career aspect of what followed, it was a profound growth life experience as a human that kind of propelled me forward, that I learned from those experiences and grew from those friendships, and grew as a person in ways that I don’t know that I could have even if I had gone to university, so that’s what I took from that.

Samuel: It gave me a sense if grounding, and safety within this industry that I needed the rest of my life. And I knew that I had this sort of family who weren’t like blood family, who I life, but this industry family who have become my friends and my brothers. I mean, it sounds kind of weird to say, but this was a band of brothers. I saw Dominic Cooper two days ago, staying at the same hotel I’m at, and it was like, it’s so funny, you have a physical and emotional memory of these people, and you have a hug, and you don’t even say anything, and it’s like, I haven’t seen you for a year because you’re working and I’m working, and hi how are you, I’m good, and it’s like that heart thing. You just go, awww, it’s amazing to have it. And you’ve got these people actually adopted in their lives and their careers around the world doing their thing. I’m so lucky to have had it, this industry is quite nebulous, quite crazy, and I have this group of people, this network.

Q: Which animal would it scare you to death to be transported into?

Elijah: Scare you to death to be transported into?

Elijah: Like a fly or something, because you’d die very quickly. I’d love to be a spider. Think about that.

Samuel: You should go be a maggot, so that you’d have a longer life span because you would develop into a fly.

Elijah: That’s true. But like a fly or a mosquito, that would be awful, because you’re a pest.

Elijah: You’d look in the mirror and be like “AHH!”

Samuel: Just these legs, there would be legs all around me, and I’d hate it.

Make sure you subscribe to ThreeIfBySpace.net to keep up on all your Dirk Gently news and follow us on twitter @ThreeIfBySpace. Season two of Dirk Gently’s Holistic Detective Agency premieres this fall on BBC AMERICA.  Until then, here’s a sneak peek of what’s to come this fall.