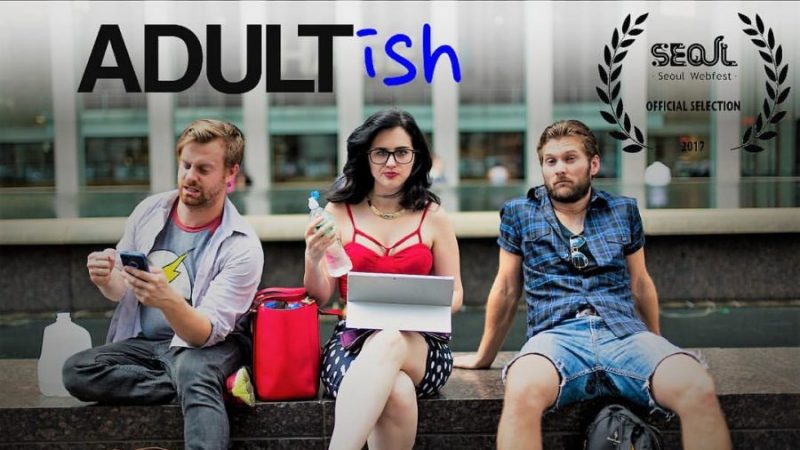 (Press Release) Atlanta, Georgia (September 14, 2017) – Orphans Productions’s web series “ADULTish” has been honored with the “Best Webseries in All Genre” and “Best Actress” awards in the 2017 Seoul Webfest.

“ADULTish” is a product of that ‘90s nostalgia, and the subconscious comfort we take in remembering what it was like to just be a kid. In this show, we explore this and the serious struggles faced by maturing millennials living in New York City. We see all this unfold through three different perspectives: a woman (Bevin) who is attempting to balance work as a blogger and dating, a man (Eric) making a living running a bar in Williamsburg but lacking in personal relationships, and a man child (Michael) who can’t seem to grasp anything…not even school paperwork. 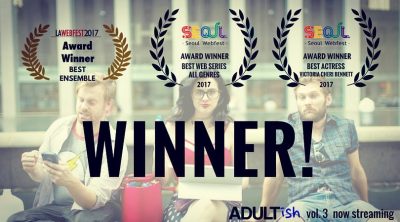 “Seoul Webfest was a surreal experience. I spent most of the time just questioning if I was even there. The people were incredibly friendly, the city was very clean, the food was incredibly tasty. There was a little town that contained a tiny, cute comic book shop were we filmed our interviews; It was amazing. The awards we won were unbelievable. They definitely weren’t the ones I was expecting to get, but they will be something I’ll treasure for the rest of my life.” – Victoria Cheri Bennett, star and creator of “ADULTish” and co-founder of Orphans Productions (which produced Seasons 1-3).

“I never thought when I started producing projects that they would take me as far as Seoul! But after we started working with ADULTish, I still can’t believe we went! It was a life changing experience and we were able to document it all. We ate actual Korean BBQ, performed Karaoke in Seoul, and even got to be on a panel with other international creatives like ourselves. I can’t wait to go back and make even more memories with the ADULTish crew.” – Jordan Elizabeth Gelber, head of marketing and distribution for “ADULTish” and as well as the co-creator of a separate docuseries featuring the cast and crew of “ADULTish” and their adventure in Seoul.

Season 3 can be seen on Footprint.TV now. Check out the trailer for season 3.

Award Winning Web Series – ADULTish is a comedy that explores serious struggles faced by maturing millennials living in New York City. The show, which has a strong geek/pop culture backdrop for the series, explores these themes through three different perspectives: a woman who is attempting to balance work and dating, a man making a living but lacking in personal relationships, and a man child who can’t seem to grasp anything.

Orphans Productions is an Ensemble of Professionally Energized Creatives and Misfit Filmmakers Intent on Reflecting this World through a Cracked Mirror of Unique and Questioning Stories.

STARBABY ENTERPRISES is a New York City based Marketing and Production firm, that creates and curates award winning original films, series, and commercials for individuals in the Entertainment and Lifestyle industries. The firm has a team dedicated to overseeing the development of original projects, like “ADULTISH” from storyboard to syndication. Their unique specialties in video production, investments, and network distribution, allows them to stay true to the artistic vision while providing a direct path to the desired viewer. Starbaby Enterprises is the production team behind the upcoming “ADULTish” docuseries which captures the cast and crew’s experience attending the Seoul WebFest.

FOOTPRINT is the premier multichannel network dedicated to OTT distribution and commercialization. Our network and platform is redefining video content distribution and consumption for creators in the new era of digital media & entertainment. We market and deliver the FOOTPRINT lifestyle and entertainment experience to online viewers on all the popular web, mobile and connected TV platforms. We also partner with new OTT networks, platforms and service providers, who represent instant distribution and are seeking content partnerships to differentiate and augment their OTT services being delivered to their consumers.