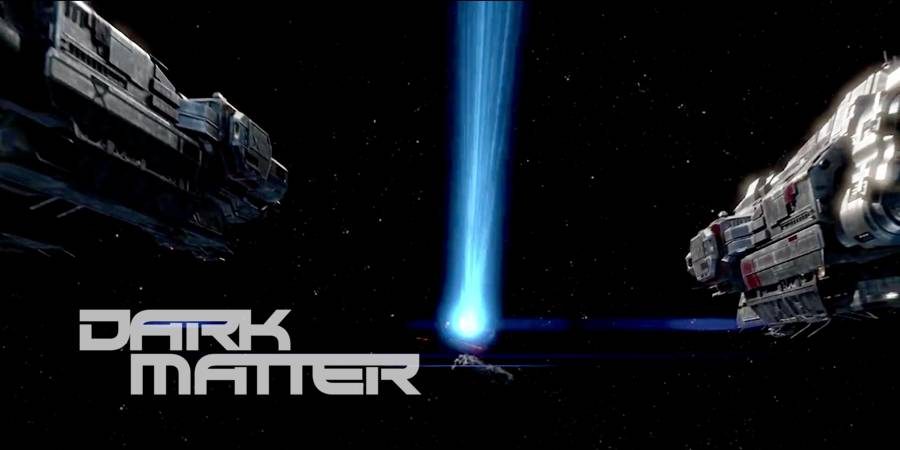 If you’re even a casual viewer of Dark Matter and spend any time on social media, you know fans are working hard to get another network to pick up the show. We’re not happy about Syfy’s boneheaded decision to cancel one of their highest rated shows. Showrunner Joseph Mallozzi explained the network’s reasoning behind the decision in a recent blog entry. It’s an interesting, if not frustrating read. In short, Syfy didn’t own the show which meant it was cheap for them to buy, but also less profitable for them under such an arrangement. So that tells me that no matter how many viewers Dark Matter had, if it were less profitable for Syfy than network-owned shows it would still have gotten cancelled. Don’t buy into the #ItsAFanThing because the sad reality is #ItsACashThing.

But enough looking back at bad decisions by a network that continues to make the same old mistakes. This post is primarily to organize fans to push for another outlet, like Netflix, Amazon Video, or Hulu, to consider the show. The following suggestions are just that – suggestions. If you have anything to add (preferably based on experience with other successful campaigns) please comment or hit me up on Twitter at @Thogar. This document will also be occasionally updated if and when new or better information comes to light.

We want to hit Twitter and Netflix, and hit them hard. We also want some “FTL Drives” where we tweet a hashtag at scheduled times, and only those times, to get us trending. For viewers in North America, we suggest Fridays at 9pm ET which was the east coast broadcast time for Dark Matter. We will tweet for an hour just like we live-tweeted when the show was broadcast. A unique hashtag is also important for measuring how we trend during that hour. Until then, we’re suggesting #TeamRaza as it’s unique tag we can use long-term it and evokes both a sense of family and a united purpose. For an idea of how this has actually worked in the past, check out this excellent write-up by Matt Carter who knows a lot more about the TV industry than I ever will.

As mentioned, there will be new hashtags unique to each weekly tweeting event. We’ll tweet out the hashtag inside an image in advance and ask that no one use it until the scheduled time. Then, when that time comes, we tweet the hell out of that unique tag! The 2 key points are to NOT use the hashtag before the appointed date/time and to ONLY use the unique hashtag in tweets for the hour. That’s just ONE HASHTAG in your tweet (don’t even hashtag Dark Matter). If we can do this and get the tags trending, it’ll get noticed by people like Netflix who actually gauge social media response and take it seriously. Once the hour is done, we can go back to using #TeamRaza or really whatever you like that supports the show. Keep up with us here and on Twitter for updates.

•Keep reading for “UPDATE 09/04” with more details about FTL Drives straight from The Dark Committee.

The Twitter accounts for some of the networks are: @netflix, @AmazonVideo, @AMC_TV, @hulu, @tntdrama. If you think of more, please let me know. And remember, only use one hashtag in your tweets, and during the FTL Drives only use the designated hashtag so it trends. Always be positive and polite. Please, no bashing of other shows and fandoms, this is a friendly effort. We won’t build ourselves up by tearing others down.

Did you know tweets with images get a lot more reaction than tweets without? Well, I have you covered! I’ve got a collection of nearly 300 animated GIFs from Dark Matter that you are free to download and use as you please. Yeah, just click on that boatload of hyperlinked text to access them and use them in your tweets, Facebook posts, wherever you like. Go nuts! 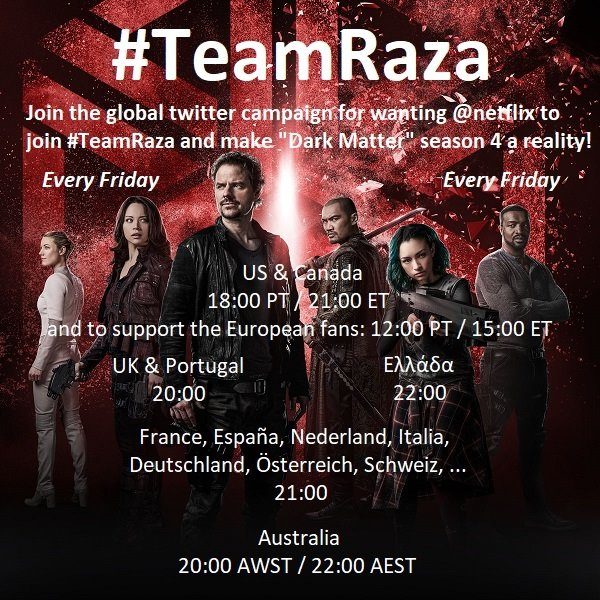 UPDATE: Direct from the Dark Committee – Your assignments, should you decide to accept them, to get Dark Matter a season 4: 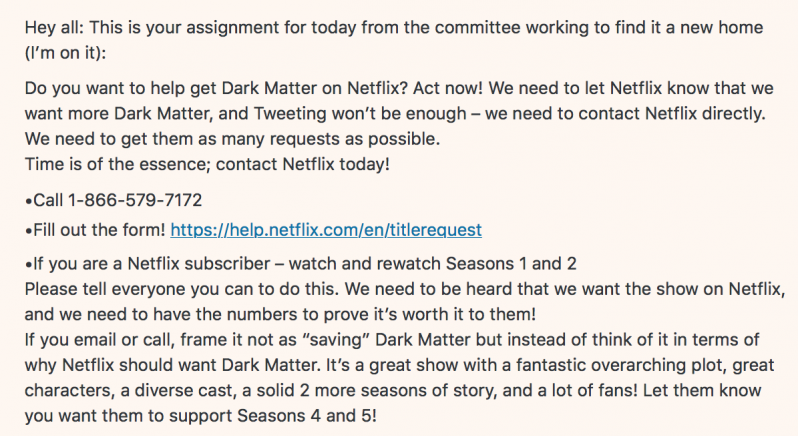 UPDATE (09/04): Here’s our Twitter Plan of Action. PLEASE follow these rules so we can get trending. Again, more details will be forthcoming (specific hashtag for the event, et cetera):

Hey everyone, I think we are all on the same page when we say we ALL want to see Dark Matter thrive on another channel or syndication (like Netflix).

So we kick off the Dark Matter FTL Drives. How? I’m glad you asked!

To accomplish this, we have some VERY IMPORTANT GUIDELINES we need to follow to make it happen.

For example:  We want to see @netflix pick up Dark Matter! #TheRazaCrew

You tag the syndication, you use the hashtag, and you do NOT hashtag Dark Matter, nor do you add any other hashtags in the tweet.  Twitter Analytics picks it up and displays the trend on the sidebar.  That’s the simple version, and you become a geek god for your efforts!

IMPORTANT:  Make sure when you tweet with the hashtag it’s public so the world can see it! Private and filtered tweets won’t be picked up in the analytics.

As a side note, you can do an “open” post (as opposed to a friends-locked post) with the same info on Facebook for their analytics. Hitting social media wherever we can won’t hurt!

We can do this – let’s make our voices be heard across the galaxy- and we can if we follow the instructions above closely and work together, WE WILL BE HEARD!

So whaddya say? Let’s go save a show today!

HUGE thanks to Kelli and Lance Zielinski (@KelliZielinski, @MetalAria), Hilda Clark Bowen (@PBMom), Epiome (@the_epiome), and Lo (@starbuck125) for their tireless efforts! Click on their Twitter handles and follow them, please.

This information will change and be updated regularly. It will also be shared by Mr. Joseph Mallozzi on his blog.

So there’s our current Twitter plan of attack. Check back regularly for updates, additions, corrections, and reference. Below are a few more things you can do to help out the show.

Dark Matter will return if enough of us work together. Go #TeamRaza!