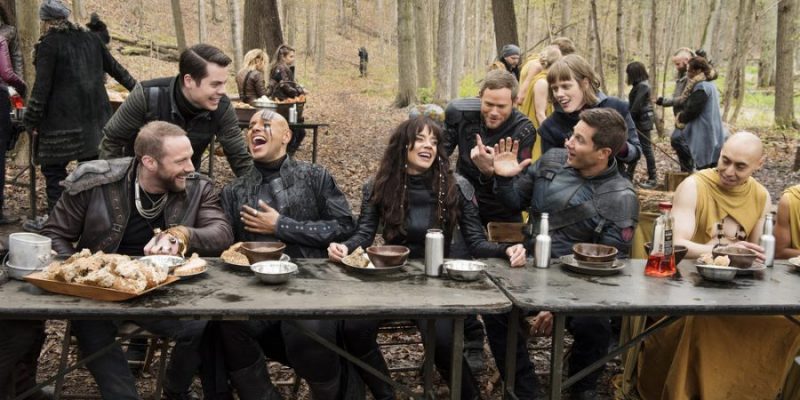 With the announcement that Killjoys will get two more seasons (20 episodes) to bring its unique story to fruition, the season 3 finale takes on added meaning and excitement. After all that anticipation and preparation, the battle royale we’d all been waiting for at last unfolded. Hullen ships descending, our little band of revolutionaries resisting, and enough twists and turns to fill up a pretzel bag came at us from all sides in “Wargasm.” We got all that we wanted, and more in EP 310.

When the battle between Aneela and Dutch was finally joined, the prevailing wisdom was that there was going to be a winner and a loser. Blows were struck, snide comments were delivered and blood did flow. But in the kind of twist we’ve come to expect from Killjoys, the enemies would became allies, ultimately united in a common cause. Yeah, that’s what you call a “big twister.”

“Wargasm,” indeed. It certainly had to leave viewers not only well-satisfied, but hungry for more. It’s okay if you admit to feeling an afterglow — it was that kind of night. Aneela and Dutch found common ground (thanks to Zeph’s ingenuity, resourcefulness and memory-packed syringe) and turned their attention to a co-operative working relationship. When they descended together into the green, met Khlyen and finally strode down that sandy beach in search of “The Lady” at show’s end, you had to wonder if this was all Khlyen’s doing? 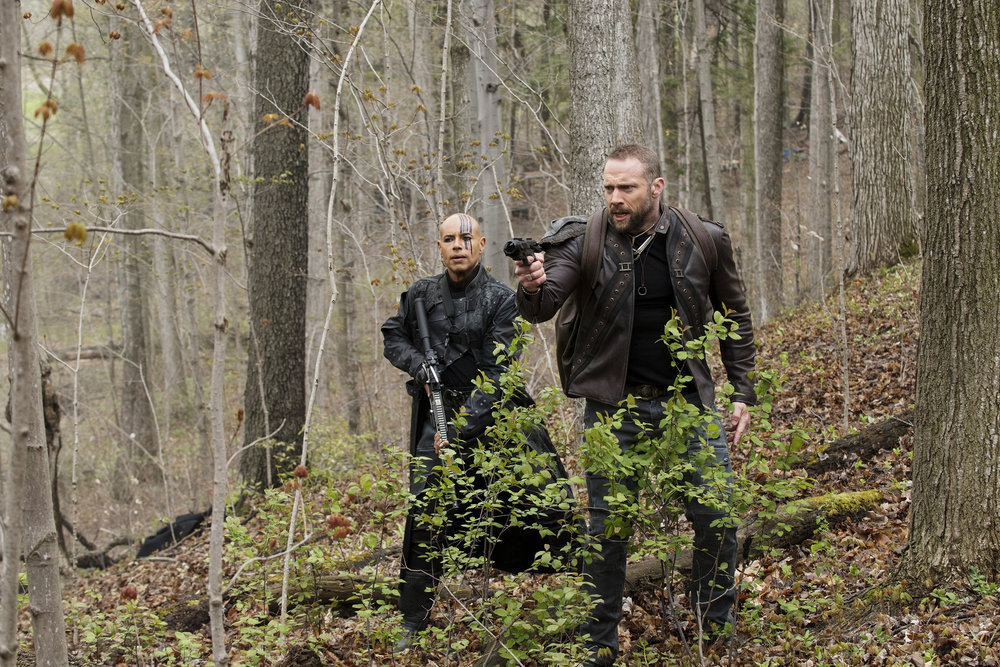 Remember what Dutch has said several times, “Khlyen always has a plan.” When he met his “daughters” on the ocean’s shore in the green, he didn’t seem surprised or confused by the development. His countenance was one of confidence and assurance as he produced a pair of long blades for the ladies to carry into whatever battle The Lady has in store. By the end of “Wargasm,” were we witnessing the fulfillment of Khlyen’s plan to dispatch the Hullen influence once and for all? That was my sense, though I could be way off base.

I felt that EP 310 was a testament to a host of special moments that left you wondering what the Quad will feel like when it’s all over. For my money, there were a lot of messages emanating from the scenes we witnessed throughout the hour. It was a finale that brought us not only the bangs and flashes we enjoy in our season-enders, but the subtler, gentler moments that create a rich and textured show. Killjoys delivers layers in its sci-fi soul and that’s what I think makes it special.

The big question that leads us into a season 4 is who or what is The Lady and what are Aneela and Dutch, now on the same side, going to do about it? And the reappearance of Khlyen in the green, what’s his deal? The devil has returned to the Quad and our pair of sisters — who aren’t sisters, but they are — have set off to deal with it. 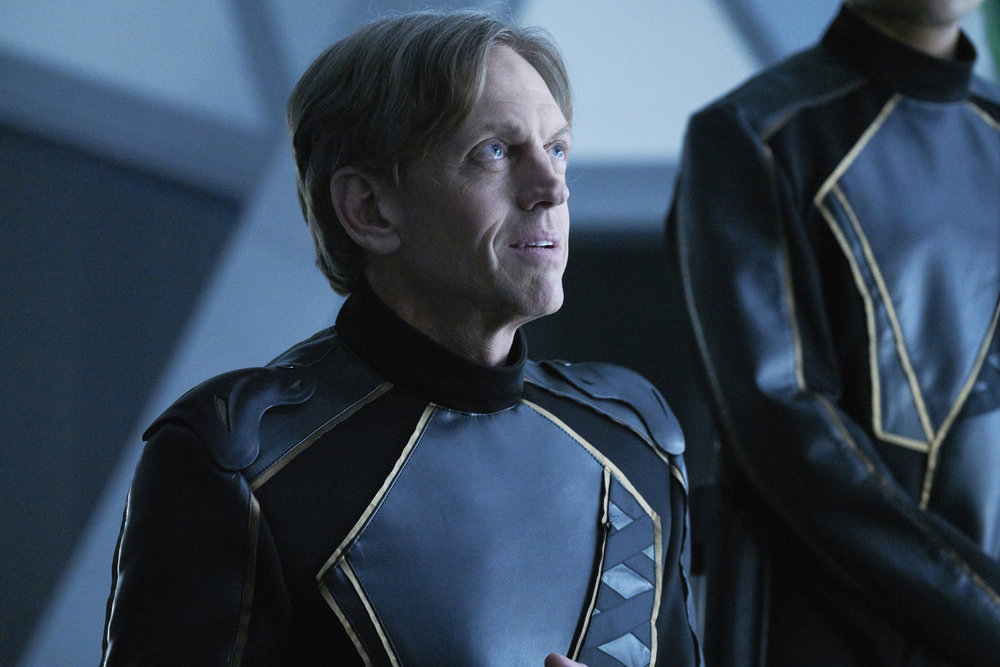 One of the episode’s most striking visuals to me was the meal scene that had imprinted a “Last Supper” theme on the show’s coming events. Was that seminal scene a comment on the sacrifice that Dutch was about to make, a Christ-like sacrifice of herself to “save” not only those she cared about, but the Quad as a whole?

I was struck by the symbolism and power of the scene and how casting Dutch in the role of a Christ-like character in the middle of a sci-fi epic was not only gutsy, but very well done. It was respectful while also delivering the message of what was about to come. Michelle Lovretta and her crew, as well as the actors, really left us with a scene that spoke volumes about what was about to unfurl – even if there was a twist tossed in. To Michelle Lovretta I ask this — what was the thinking behind creating that scene? Am I close? Am I way off? Am I in need of a margarita?

In the preamble to what everyone felt was the definitive battle, a battle that would be hard to win, there were some very important smaller moments. Pree and Gared apparently making a firmer commitment to each other in the scene where they were tied together by a third party at the table. On the surface, you wonder how these two ever connected on any level. Pree’s personality is big, flamboyant and filled with a passion for life, while Gared is more subdued, quieter, and on a simpler plain emotionally and mentally. Yet, the pair have found a place where they fit together comfortably and a small act of commitment in the episode makes you wonder where they are headed. And, quite frankly, it was a message of hope. I liked that touch.

Thom Allison and Gavin Fox have a wonderful chemistry together as seemingly polar opposites that have come together and forged something unique and engaging. That’s quality acting, right there. I find both characters compelling individually and dynamite collectively. 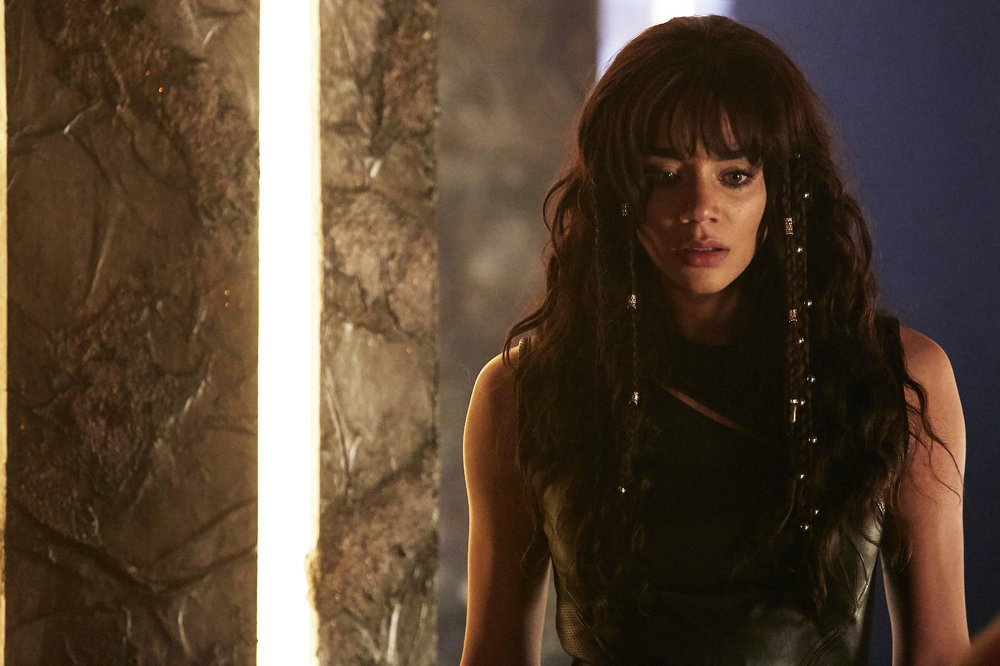 I’m glad they survived the battle that followed. I want to see how this relationship plays out in season 4.

For my money, another interesting arc was watching Fancy Lee again demonstrate a capacity for honor, integrity and forgiveness as he seems to keep giving Turin opportunities to do right. Once again, a minority group (The Cleansed) rise to the challenge of not only warfare, but honor, and teach those who marginalized and betrayed them a lesson in forgiveness. Thankfully, Turin takes this second chance to prove Fancy’s trust is not misplaced and shows us a little honor of his own. Fancy Lee proves to be something of a moral compass in this episode and I liked that.

Sometimes, in the midst of chaos and death, relationships are healed by small gestures and looks that tell longer stories. The character of Fancy Lee is a valuable one moving forward and I look forward to seeing more of his backstory. In a twitter post recently I hypothesized to the wonderful Sean Baek that perhaps Fancy used to be a smuggler by day, a member of a flute band by night. Perhaps the sax?

Anyway, in this episode (and even in the previous episode) I was struck by Fancy’s willingness to demonstrate forgiveness. He certainly didn’t have to, but in the end he proved to be not only a brave warrior, but an honorable man. 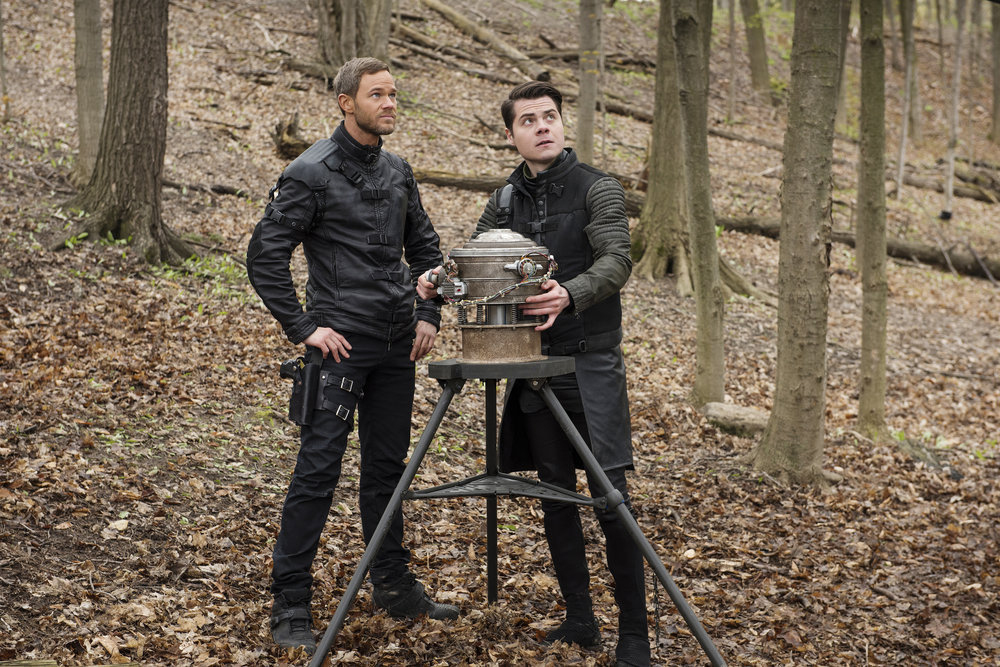 What else did we see?
Well, I took particular pleasure in seeing Pip and Zeph dive into a serous lip-lock towards the end. While the two share nerd traits, they are pretty much on the opposite end of the Nerd spectrum, yet I recall seeing a little “look” between the two the previous week, so wondered where that would lead.

Having talked with Kelly McCormack about the character of Zeph, she hinted that her character was looking for a little action, but the nerd mating skills were suspect. While she has a sisterly crush on Dutch and D’Avin, it would be Pip that opened the floodgates of some “action” for our beloved Zeph. Kelly McCormack is delightful, her character  Zeph is delightful, and the “in the midst of battle” smooch with Pippen was delightful. Where will this lead? The potential is a bit mind-boggling, to be honest.

Hasn’t it been interesting to see the emergence of D’Avin this season. From Killjoys muscle to the leader of the resistance army, the trail for this character has been interesting to watch develop. His turn as the commander of the army was enhanced in the finale by he and Johnny getting trapped in the elevator with Delle Seyah. In all the seriousness that was swirling around them as they were first trapped, then set adrift in the compartment, his teasing of Delle Seyah about baby names was a chuckle-inducer every time. 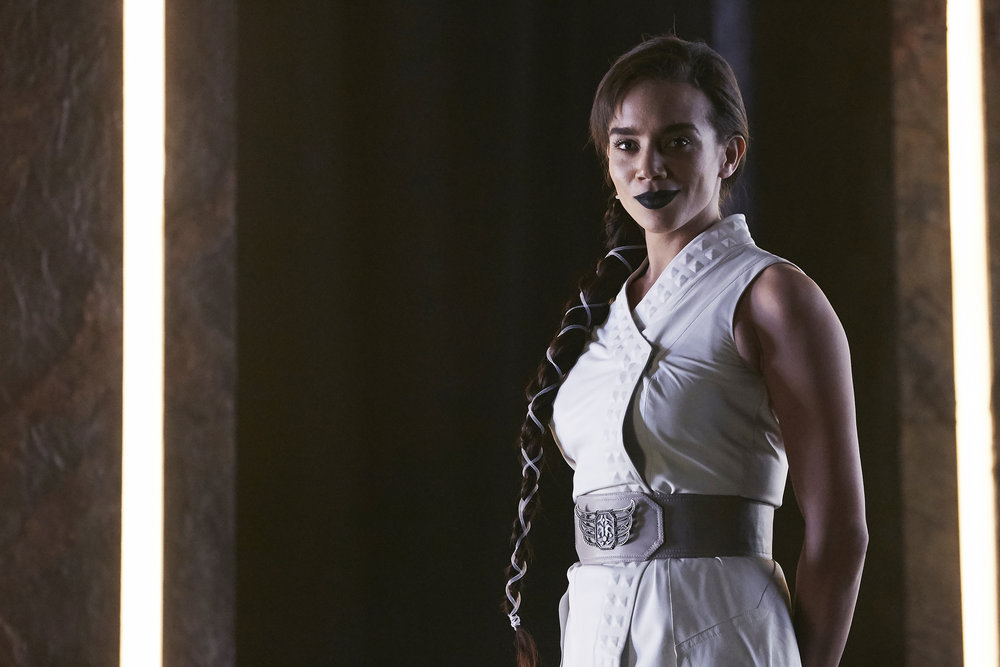 There’s an art to humor delivered through fear, and in our finale Luke Mcfarlane’s character found that even keel. Amid the uncertainty of the battle and Dutch’s disappearance with Aneela, the calm tossing of baby names to a terrified Delle Seyah was very funny. Delle Seyah probably didn’t think it cut the tension, but it made me laugh. And I thought Delle Seyah was an interesting study in this one as, despite her seemingly unquenchable lust for power and conquest, when push came to shove, she called off her Hullen and cast her lot with our two men in the elevator. Yes, the emergence of The Lady’s spidery things helped in that decision, but you could see her wavering a bit even last episode.

Who will Delle Seyah be when, and if, our drifting trio are rescued? I sense that her experiences and the “child” she’s carrying have opened up her eyes a bit to the menace the Hullen certainly are. Is Johnny capable of forgiveness for the death of Pawter? Will D’Avin rise to the fatherhood challenge? Does he even want to? Does Delle Seyah want him to? Plenty to ponder as they drift aimlessly in space awaiting their respective fates. But I think I see a softening in Delle Seyah that’s sneaking out beneath that hard-edged exterior she likes to put on. Though, the zingers that fly between her and boys is always a special moment in the Killjoys realm.

I thought the season finale was on-point. Hope was rekindled on many fronts and a mist of optimism hung in the air afterwards. Aneela and Dutch, for so long on opposite sides of the argument, now take their unique abilities and talents on a mutual quest. That’s something I didn’t see coming and the writers played it beautifully, engaging us all in the fight while all the while setting the stage for the real battle to come — within the green against The Lady. It was well-played, folks. Now, with a fourth and fifth season green-lighted, Lovretta and her merry band of mischief-making writers can really carve out storyline, complete with side arcs, that can close the Killjoys tale in a complete and impressive way.

Bravo to the network for taking the leap and ensuring that this show can do what so many quality shows haven’t been given the opportunity to do — close out the story properly.