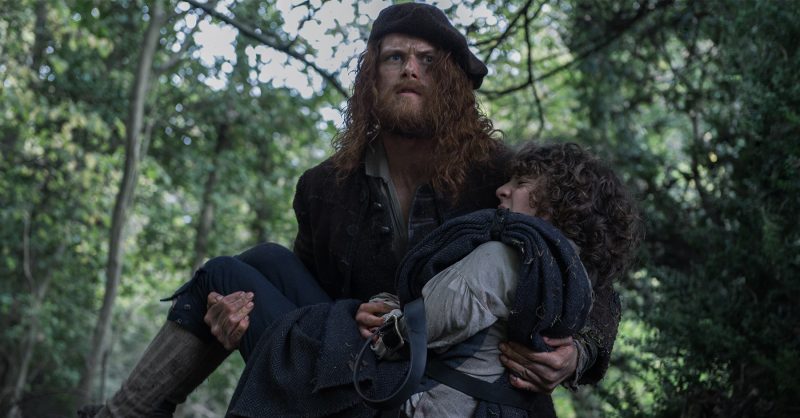 It’s often in moments of crisis that we realize who we truly are. Or rediscover our true selves. Jamie and Claire are both lost at this point, and in this episode, both began to make their journeys back to the world.

Wouldn’t you just give anything right now to make Jamie smile? Not like the fake “Jenny I’m home!” smile at the end of the episode. Or Claire’s “dream Jamie.” But his despair, his complete and utter loss of his true self was totally heartbreaking in this episode! Haunted eyes, no words – and nothing can be done to make anything better. Sam Heughan is doing a killer job of truly showing us how lost Jamie is. Even six years after Culloden, he doesn’t seem to be able to come back to life. Of course, living in a cave, practically in solitary confinement, doesn’t help at all.

Star of the night? Romann Berrux. Really, more than Sam? Partly because I suspect we won’t see much more of young Fergus, and partly because he was terrific. Now about 16, he’s on that cusp – still really a child, but soon to cross whatever invisible line there is between childhood and manhood. He brags about his experience in the war – “I’ve been to war. I was at Prestonpans. I killed the filthy Redcoat officer.” I caught an echo of Murtagh in Fergus’s description – “It’s much braver to kill a man with a knife. Nothing but flesh and metal between you.” He taunts the Redcoats, counting on his youth to excuse him. He’ll learn soon that that’s not enough to get him out of difficult situations. 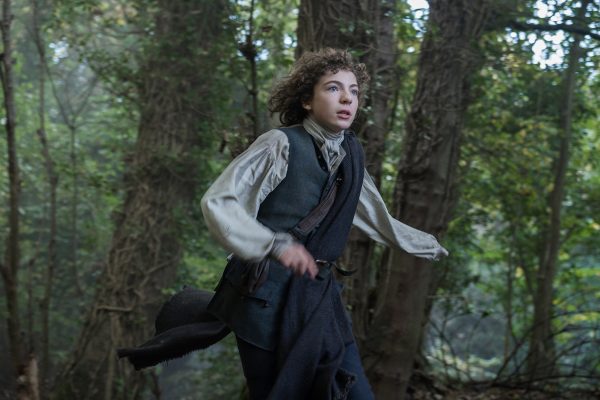 And when he throws his frustration in Jamie’s face, calling his beloved Milord a coward – you could see how much he’s lost. He never had a father or a mother, the only mother figure he’s known has been gone for years, and in reality, so has his father figure. What else does it look like to him? He can’t understand that Jamie is doing his best to protect his family from what will come if he does anything else.

But it’s Fergus who brings Jamie back. Unfortunately, it’s a huge tragedy that does it, but the loss of Fergus’ hand was finally what brings Jamie out of his self-imposed mental cave, and his literal one as well. He can’t hide any more. He has to step up. The mere fact of his existence has caused Ian to be arrested multiple times, caused his family to live on edge at every moment, and has now cost the future of someone dear to him. And Fergus sees it –  the life coming back to Jamie’s eyes. “You remind me – I have something to fight for,” Jamie tells Fergus.” “There you are, Milord,” Fergus answers. He may not be all the way back, but Fergus can see that the man he has looked up to for so long is still inside. 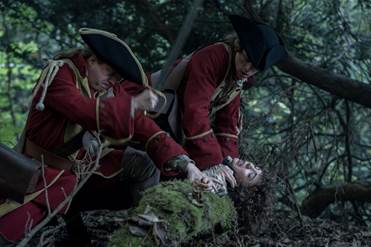 Oh, OK, yes, Sam gets a huge AYE. OMG, completely heartbreaking! He’s even more lost in the show than Diana wrote him in the books, and while I’m not sure I’m alright with that (because, after all, how much can one fan take???), Sam does a fabulous job of portraying this completely broken man. He doesn’t know, any longer, how to actually talk to people. He has nothing to say. He craves other people – he needed to hold Jenny’s brand new baby, and he has to have something in the real world to hold on to – but he has no idea how to interact. When he falls to his knees after what happens to Fergus – how many of you burst into tears with him?

Ian understands – Ian is the most level-headed person at Lallybroch these days. Talking with Jamie after Fergus’s tragedy, he tells Jamie that his missing leg still hurts him sometimes, and Fergus will go through the same thing, but “that’s only a hand. Claire was your heart.” Jamie’s heart is gone, but it’s still causing terrible pain.

Mary NcNab is a practical woman, isn’t she! And quick! She saves the whole family from the wrath of the Redcoats, putting herself at risk. And she brings to Jamie the only thing she has. “What I want is to share something different, something less, mayhap, but something we both need. Something to keep us whole as we move forward in this life.” She understands that she can’t replace Claire, can’t even touch that in Jamie, but on the eve of him disappearing, perhaps forever, into a British prison, she can give him the memory of gentleness, of caring, of touch. But Jamie is hesitant, and kisses her with his eyes closed – who does he see?

I liked the change that was made to how Jamie is turned into the Redcoats. In the book, they have a trusted man appear to be the turncoat. But there’s no reason to bring in another character here – Jenny’s been protesting for years that they haven’t heard from her traitor brother, she owes him no loyalty, and has every reason to want to end the British threat to her own family.

And Laura Donnelly is wonderful here, carrying out her role, but heartbroken and angry that she has to be the one to do it. Jamie wants to make sure that his family will benefit from the “blood money” the British are offering. It’s the final thing he can do, he thinks, to take care of them. And she’s very worried that he’ll be “hangit,” even though Ian assures her that they don’t do that to Jacobite prisoners anymore, that they “only” imprison them. “Only!?!? Have you not seen the inside of enough prisons for a lifetime?” she asks Jamie. “Little difference to the prison I’m living in now,” he answers.

Claire, in Boston for about a year now, is about to have her own surrender – giving in to the life she has to accept now. And even as Jamie haunts her dreams, she has a real man next to her, one who wants her, one she once wanted – can he be a “body double”? Can she pour out all of her repressed emotion and her need into Frank? Well, she can… until he realizes that’s what she’s doing. Things seem to be going along well for them – I’m sure Frank is thinking she’s letting go of her traumatic past three years and coming back to her senses. The little sexy glances, the amusement at Milly and Jerry, the shared excitement of raising that adorable baby – this is all Frank wants. He wants to have back the woman he never stopped loving. But Claire hasn’t really come back, as much as she might be fooling both of them. She, too, keeps her eyes closed while they make love – and Frank finally realizes that it’s not him she sees.  I liked how writer Anne Kenney showed the final break in a very literal way – in early bedroom scenes, Claire and Frank share a bed, hesitantly, tentatively – but in their final bedroom scene, they’re in twin beds and seem at peace with it.

Caitriona is very good at showing that tightrope walk – her heart has been ripped out too, but she has the pressures of daily life, the constant pull of people who need her to bring her back. And now, very quickly, she’s in med school! So that will fill up a good corner of what’s missing in her soul, something that Jamie doesn’t have available to him.

So Jamie and Claire have both surrendered to the needs of the outside world, and in doing so, have begun to find their way back to themselves. Of course, they’ll never get all the way back without the other, they know that, but they can finally act like complete people.

It’s understandable – there are only so many minutes available to the production – but everything seems to be moving at warp speed in this episode. I’m not sure there’s a remedy for it – there’s so much to tell, Voyager is such a dense and complex book. On the one hand, you’ve got fans clamoring for J&C to be back together, and on the other hand, you’ve got lots of fascinating and necessary story to tell before you get to that point. So what do you do? You compress what could be an entire season all by itself into just a handful of episodes. But the timeline has to be shoved into a schedule to do that. Claire’s become a med student quite a bit earlier than she did in the book, and Frank’s reluctant agreement to her plan is completely gone. We see nothing of his feelings about his wife’s unusual (for the time) desire. Which is too bad, because his acceptance, and subsequent support in caring for Bree at his teaching office after her school day, was one of the few times that we saw him in a good light (through Claire’s eyes) in the later part of their years together.

And while I’m nitpicking, what was the point of Jamie’s shampoo-commercial-worthy hair with that little hat perched on top? If the purpose of the tam, as stated multiple times, was for the “bonnet” to cover the “dun” color of his hair, it couldn’t have failed more. The beard, ok, if you don’t have regular razor access, shaving occasionally and always growing out a beard isn’t the most fun thing, I understand (having hairy sons). But there was no attempt at all to cover up that head of glorious hair underneath that hat. Pretty, but not practical. 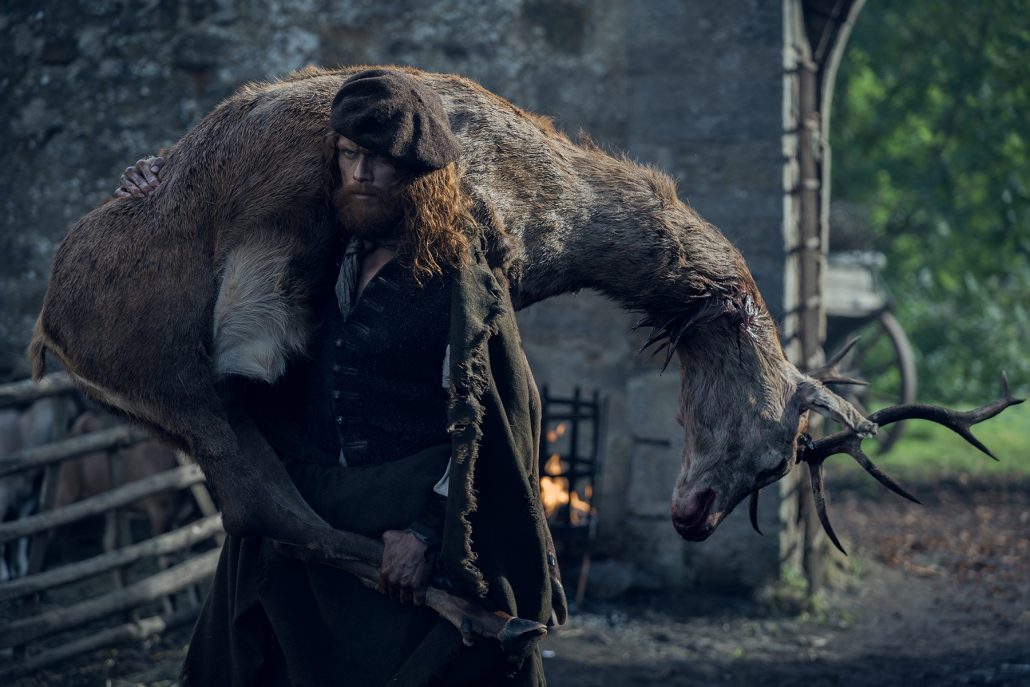 I’m looking forward to getting to know Joe Abernathy, but introducing him here, in this episode, really just reinforced the stereotype that in the ’50s, all men were misogynistic and racist. Let us get through Claire’s trials with med school before we deal with another one of society’s issues.

And I know I’ll take flack for this, but I’ll say it anyway. Is Tobias phoning it in? He’s had 4 lines in each of the last two episodes, and for the most part (ashtray throwing scene last week excepted), they’ve been wooden, with the same dull lack of emphasis. He’s a phenomenal actor, he’s proven it time and again, but it’s almost as though when BJR died, so did Frank’s spark.

The next episode, though, should bring us another long-awaited character – it has to be Ardsmuir, and Lord John Grey! I’m quite excited to finally see David Berry on screen – how about you?