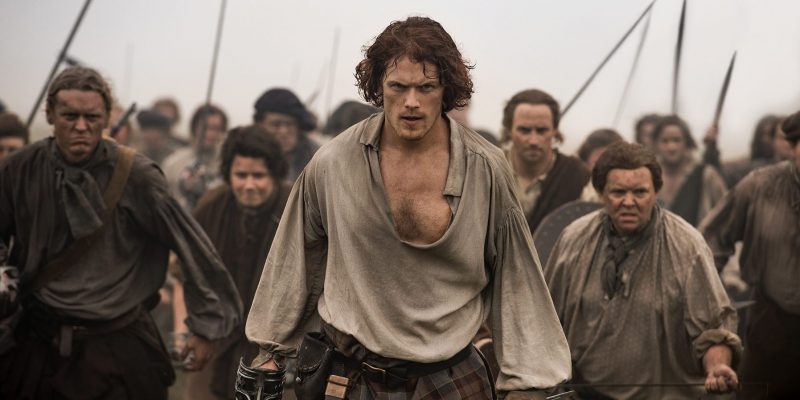 Outlander Season 3! The Battle Joined – On Both Sides of Time, Review

We’ve been anticipating this first episode of season three for what, 14 months? Clips, speculation, photos, discussion – and it’s here! I saw it first at ComicCon in July, but like many of you, once is not enough. This was a fitting ending to our Droughtlander, and a stunning beginning to what promises to be a great new season.

The Battle Joined applies to both sides of Jamie and Claire’s divide. While Jamie is in a literal battle, Claire’s war is no less real. And both of them would rather not be fighting to survive. Jamie has the soul-numbing battle of Culloden to rush off to, and the promise, he thinks, of death at the end, so that he can quickly end the pain of sending Claire back to the future. Claire has no such promise waiting for her – she knows that her return means trying to figure out how to live, not only for herself, but for for their child. Neither one is ready, but that doesn’t matter.

We’ll take the two halves of the divide separately. I LOVED the Jamie side. Disjointed, difficult, and painful, everything Jamie saw, heard and felt came through Sam Heughan’s subtly expressive face. No grimaces or grunts, but his extreme loss, his sorrow, and his soul-deep desire to die shone in his face. I’ve seen mentioned in interviews that Ron Moore originally wanted to show the entire battle, but this, as snippets and flashes of memory, was so much better, and I’m very glad that after thinking about it – and I’m sure it wasn’t an easy decision – he decided to do it this way. Jamie, seriously injured, isn’t thinking clearly. He wouldn’t have remembered the battle as  whole – and in the book, he barely remembers anything about it. 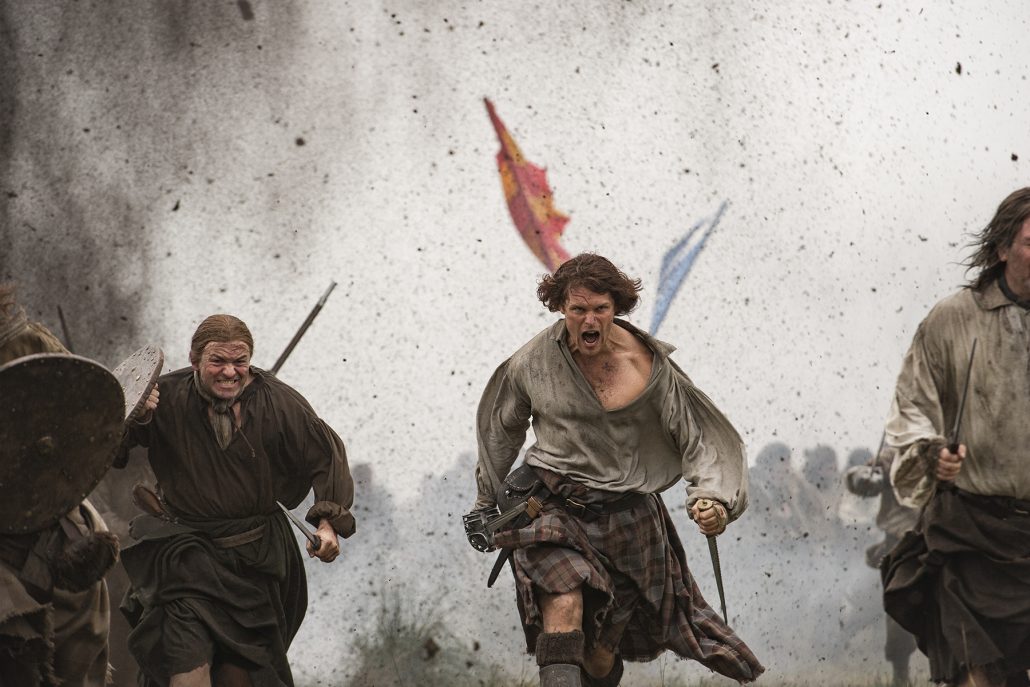 One other excellent decision was to do it without music – the first 7½ minutes have only the sounds of battle, the bang of swords, guns firing, cries of the Highlanders, the little bit of dialogue from Prince Charles. Only when Jamie and Black Jack Randall see each other does the music come in. Then the fighting becomes personal – neither will look to anything else until the other is dead. No words, just a few brief moments of desperate combat, and Jack is dead, dying on top of Jamie in a gruesome mockery of Jack’s torture. 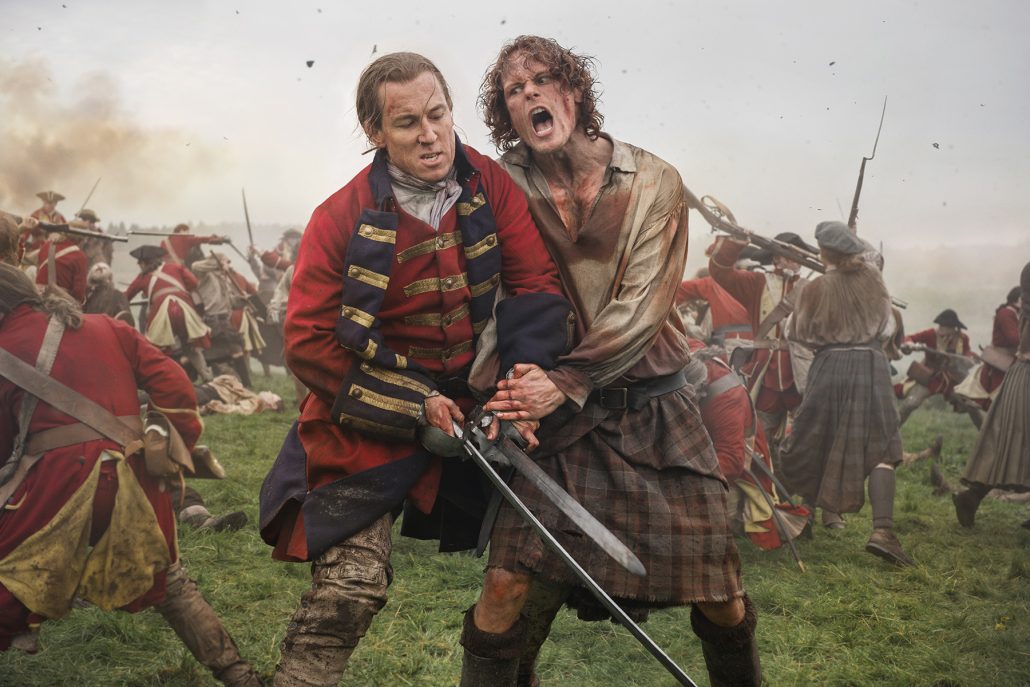 Something in Jamie is struggling to live – when he sees his fellow Highlander gasping, he keeps his eyes glued to the other man’s, to give him something to hold on to as he dies, bayoneted by a Redcoat. But then he goes with his instinct to play dead and not bring attention to himself. The scenes of the Redcoats going through the piled up bodies of the Highlanders, as far as the eye can see, looting and removing weapons, was chilling. There is no glory in war, only blood. The overwhelming force that the British brought to the battle was abundantly clear on screen – on horseback, with rifles and bayonets, there was no way the Scots could have prevailed. This must have been a massive job to film – hundreds of extras on both sides, hundreds of costumes, hours and hours of preparation – there’s no way it could have been done more easily and have the truly excellent result we saw in the episode.

One glimpse of Murtagh, that’s all we got! But it was definitely wonderful to see him! “Where have you been? Having a wee whisky?” Jamie smiles and asks after Murtagh has fallen next to him, and they realize that this isn’t an enemy, but the one they’ve worried about the most. And Murtagh watches out for Jamie, even in the thick of things – perfect moment. Have we really seen the end of that dour countenance and most faithful protector? Even now (I’m adding this to the review on Monday morning, having realized I forgot to put it in), I’m tearing up thinking about it!

Throughout the books, Jamie tells Claire that he’s seen her when he’s most needed her – when he was badly injured, when he was in prison – and I loved how they incorporated this into this scene. Out of his mind with pain, fatigue, thirst, loss, he sees a vision of his beautiful Claire walking through the lightly falling snow. “Are you alive, Jamie?” he hears her ask. But of course, it’s not Claire. And we know he wants the answer to be no, he’s not alive, because he believes he really will see her once he dies, but of course, he is. 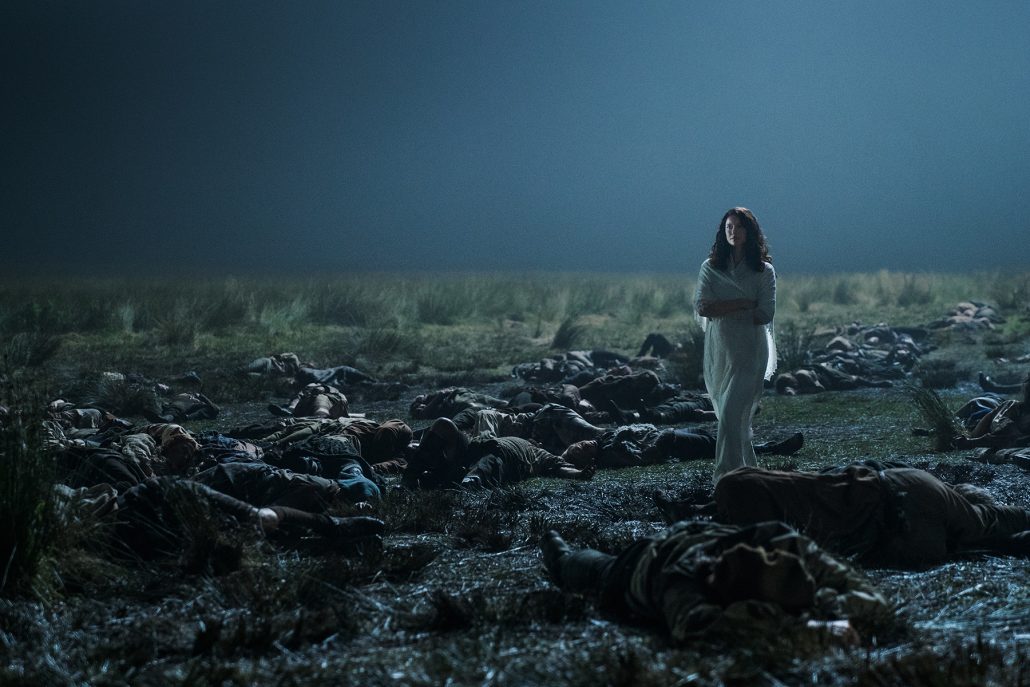 Do you remember the S2 scene where Claire goes to the Culloden visitor’s center and sees the piece of amber that Hugh Munro had given her as a wedding gift, the piece that she pushes into Jamie’s hand before she goes through the stones? I love that they tied this little piece of the story together – as Rupert helps him up – “I willna have you dying in the mud” – Jamie drops the amber, where it will later be found and added to the museum’s collection of items found on the battlegrounds.

I appreciated the realism of the scenes inside the barn, as the men prepared to die. They were hushed, with little bits conversation almost heard. Jamie asks about Murtagh, and Rupert finds out from Gordon Killock that nobody has seen him since the battle. “I hope to God he’s already dead,” Killock adds. (OK, speculators, what do you make of that?) And when Lord Melton steps in the room and pronounces their fate, Rupert steps up, to lead the men bravely to their final steps. “I have been ordered to execute any man found to have engaged in the recent treasonous rebellion,” Lord Melton announces. “Is there any man here who claims innocence of treason?” “No, milord,” Rupert answers mildly. “Traitors all. Shall we be hanged then?”

I’ve loved Rupert since Episode 1 – he’s a decent man, loyal, respectful and brave. Rather than get hysterical when he sees Jamie standing over the dying Dougal (at the end of Season 2), he honors Jamie’s request for a little bit of time to get Claire to safety. And now, as his own time grows brutally short, he makes peace with Jamie. “I’ll not say I forgive you for Dougal, but I’ll not go my grave hating ye for it either,” he says. “The Lord will judge us both, and I need to trust in His mercy. Farewell, Jamie.”

And it’s Rupert’s farewell, but not Jamie’s. This was a well-done scene – it’s revealed that this not only the notorious Jacobite Red Jamie (and some day, let’s have a discussion, from the book, about what Jamie did to actually earn this kind of notoriety), but the man who didn’t kill Lord Melton’s younger brother,  John (William) Grey, thereby incurring a “bloody great debt of honor” that can only be repaid by not shooting the traitor. “Perhaps we can still shoot him, under an alias,” Melton’s clerk suggests –  the look Melton gives him is priceless! And Jamie is transported, out of his mind with pain, back home to Jenny’s care. Not his choice – “just get on wi’it, Shoot me, or go away,” he tells Melton, but he’s alive, none the less.

And On The Other Side…

Where the Jamie side of the divide is deceptively quiet, the Claire side is unexpectedly loud. Sounds of life are all around – the tiny bird Claire sees hopping outside her window, the teakettle whistling, the crash of the ashtray she throws at Frank. It was an interesting juxtaposition.

Whatever you think of Frank, and whatever you will think of him as the season progresses, he’s trying. He loves Claire. He knows she loved him at one time, and he desperately wants to bring that back, or at least some semblance of it. He finds a lovely old home for her – “you always wanted a home of your own,” he tells her. He sticks up for her, as much as he really can in front of his timespan-appropriately-sexist boss, and doesn’t, as many a husband would in that time, disparage her intellect and attempts to participate in the political conversation. But nothing he can do can make much difference. Tobias Menzies really shines here, frustrated, tolerant, careful, tiptoeing around his wife. But even the most patient man has his breaking point. “I didn’t force this bargain on you, Claire. I didn’t force you to come to Boston. And I’m not forcing you to stay,” he tells her after she starts to throw things at him. “Go, or stay. But please do it because it’s what you what you really want to do.” 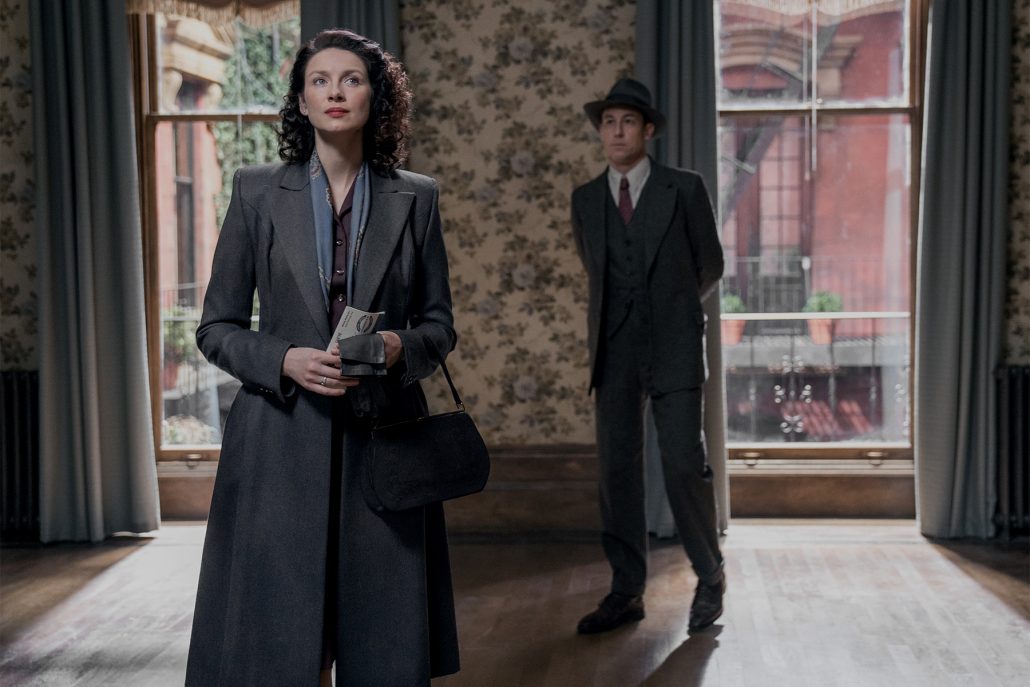 Claire is trying, in her own way, as much as she can. She’s going through the motions of living. She’s being a dutiful housewife, attending that horrid departmental coffee, cooking (how many of you would be at Sears the next day buying a new stove???). The first time I saw the episode, I didn’t really like the introduction of Milly, the neighbor (Milly and husband Jerry come up again in the series, just keep them in the back of your mind), but on rewatch, it’s good to have a peer to measure Claire’s behavior against. And Milly can say things that Claire can’t. “You’re going to spring it on him?” Milly asks when Claire is cooking in the fireplace. “He likes surprises, does he?” And Claire, probably thinking of the big surprise she had given Frank a couple of months ago, says, a little guiltily, “Not really.”

There were some interesting choices made in this part of the story, and for the most part, they worked incredibly well. Caitriona Balfe is undeniably a beautiful woman, and some productions might choose to not downplay that beauty. But an unhappy woman who doesn’t care where she is or what she’s doing isn’t going to work to make herself beautiful at every moment. Without makeup, in period-realistic hairstyles, you didn’t have to guess at all to see that this woman is haunted by what she went through, mourning what she’s lost, and having no success in coming back to her old life. 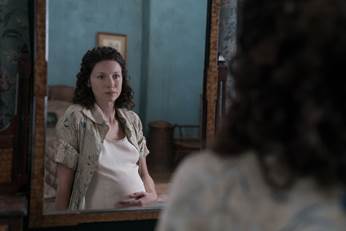 Babies bring hope, but I think both Frank and Claire are deluding themselves that the birth of baby Brianna will heal the rift in their relationship. “I’ve been horrible to you,” Claire tries to tell Frank. “None of that matters now, ” he replies. They both mean it, at the moment, and you can see the hope in Frank’s eyes. Will this be the  new beginning he wants? Will Claire be able to start a new chapter of her life without Jamie, and recall the love she had for Frank? Remember those desperate attempts to get back to the stones, Claire???

The hospital scene was great – the doctor’s condescension, Claire’s struggle to do this the way she wants (and how many of us still struggle with that these days!), and Frank’s recognition that she won’t stand for this. “Promise me one thing,” he tells her. “Try not to throw an ashtray at that doctor.” (Did you catch Claire’s quiet, angry “Bastard” as she’s going under?) You know Frank has fallen in love the minute they put that baby in his arms, and he wants nothing more than to have a happy family. We’ll see… 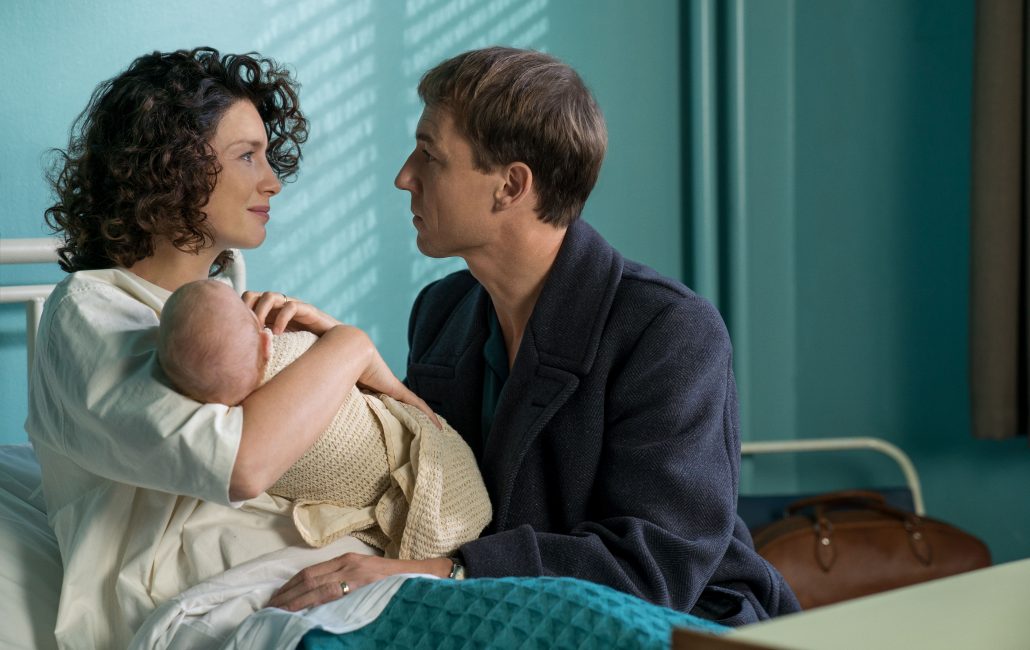 As with Season 2, the opening credits have changed slightly to accommodate new storylines. The Skye Boat song is once again all English, but there are some new scenes in the opener – did you catch them? Can you, if you’ve read Voyager, pick out what they may mean? Leg and wrist irons, a 1940s car, a bit of tartan, a man standing on the moor – interesting hints of what may be to come!