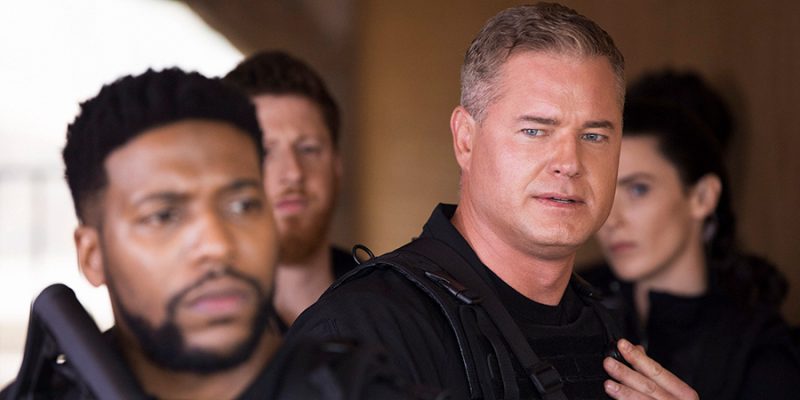 This week’s episode, The Last Ship 407 – Feast, revealed a lot about what Vellek’s plans and offered up a pretty sweet action scene to boot.

After getting yelled at and demeaned by his father, Giorgio (Jackson Rathbone) goes home and tells his men to round up the most attractive women they can find for a party. This felt like a potential missed opportunity for some added tension. Since the village Tom (Eric Dane) hid out in is within Giorgio’s normal stomping grounds, I thought for sure Cali (Tom’s Greek girlfriend and child-minder) would have gotten dragged to the party. If she had been there, all sorts of red flags would have gone up for Tom. (Who’s watching the kids? How do I save Cali?) Alas, the writers went another way and stocked the party with nameless hotties and kept the tension focused solely on the welfare of Vulture Team.

Their welfare steps into a more uncertain realm when Omar shows up out of nowhere. I thought Giorgio’s villa would be the sort of place one might see bad guys coming. Apparently not. Lots of action ensues and for a while it looked like we might get Giorgio to flip sides on his verbally abusive father. One data upload and an explosion later, we still don’t possess the seeds, but we now have a much better idea where to look.

All in all, this episode delivered the action we come to this show for, plus it both moved the story along and provided some sources of speculation about what’s to come. 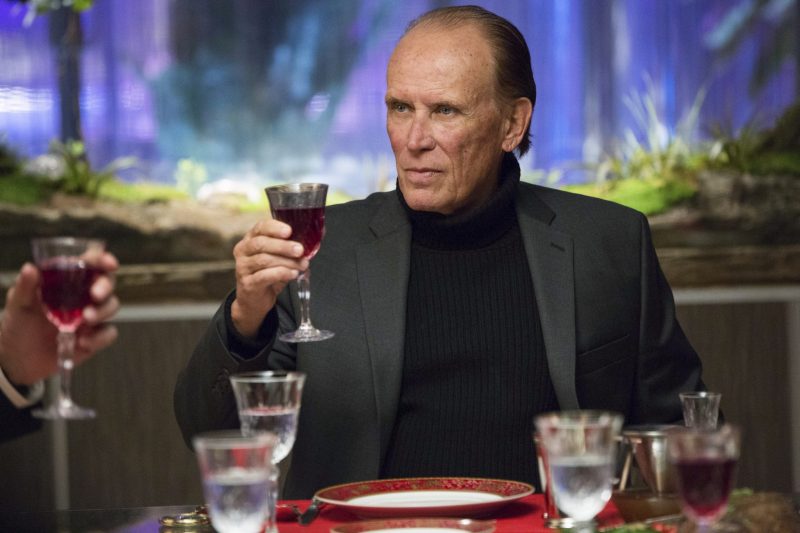 Tom may have rejoined the crew, but a few holdouts remain among the contingent of sailors that hold his time away against him. Sasha (Bridget Regan) leads the “I’m indifferent to Tom chandler” party and tosses nasty, unprofessional jibes at him throughout the episode. Chandler, besides trying to help save the world again, also wants to win Sasha over. He gives her a couple unwelcome pep talks and then in a shocker (or maybe not shocking at all), he offers confusing comfort to Sasha by holding her hand. Sasha and I had the same look. “What is he doing?” Was that whole Cali thing back in Greece just a fling? Is he trying to win Sasha over or win her back? He gave her an intense look throughout that scene meant to melt that icy heart of hers. I think he wants her back, even in this fresh-off-the-Fletcher-mess state she’s in.

In other news, some unfavorable factoids concerning Tom’s post-naval life came to light this week. Tom never denied anything, but he also offered no elaboration. During the sequence when Vellek (Peter Weller) displays the fight between Ares and Tom, he only showed the parts where Tom received a beating. If I were Tom, I’d have been like, “I won that fight, btw.”

Definitely dead now. I doubt we hear any more from his contingent, at least not this season.

Sasha took Fletcher’s (Jonathan Howard) betrayal very personally. Although she projects a confident persona, capable of coping with any eventuality, she is as vulnerable to matters of the heart as anyone. The more time she has to think about the depth of Fletcher’s actions, the deeper the chasm will come between them. When that chasm gets wide enough, she will be able to shoot him without a second thought. The hand-holding advances of Captain Chandler probably accelerate the metaphorical chasm widening. 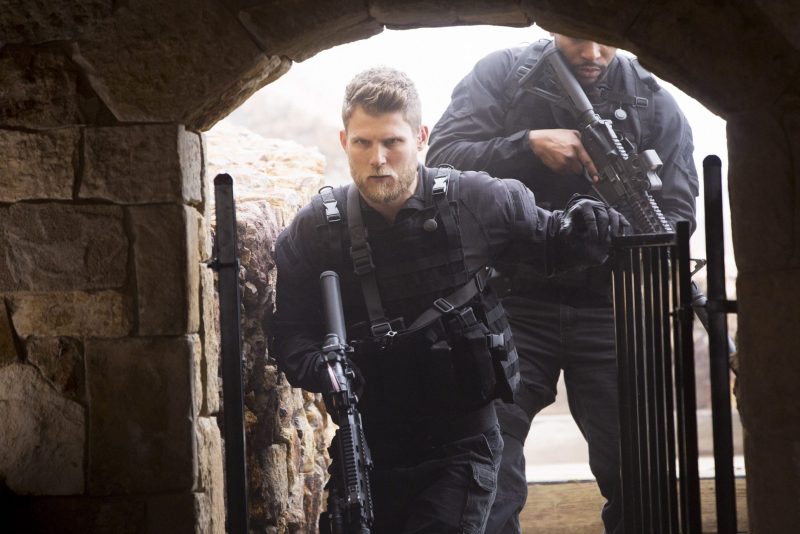 Everyone, we are all officially on Chief-watch. We know he acquired some kind of internal injury during the storm, but he continues to play the tough guy. He plays the tough guy too well. When nobody knows of his injury though, he puts himself in a position where he’s endangering other sailors. I don’t want to see it, but I bet Chief (Charles Parnell) goes down at a most inopportune time in the near future. A guy can only hang on so long with broken rib, or whatever his problem may be.

This week, Fletcher played his duplicitous game with Vellek himself. In one scene, he offers advice on the necessity of taking Chandler seriously. Then in another, we get to see him looking pensive and perhaps regretful (although it’s hard to tell what he’s feeling exactly). He now finds himself in league with the Greeks and a mad man. In the dinner scene, he identifies but doesn’t appreciate the irony of calling out the Greek admiral for turning their backs on the UK, an ally. Pot, this is kettle. You’re black. Anyone else feel like Fletcher may try to flip sides again before the season ends? 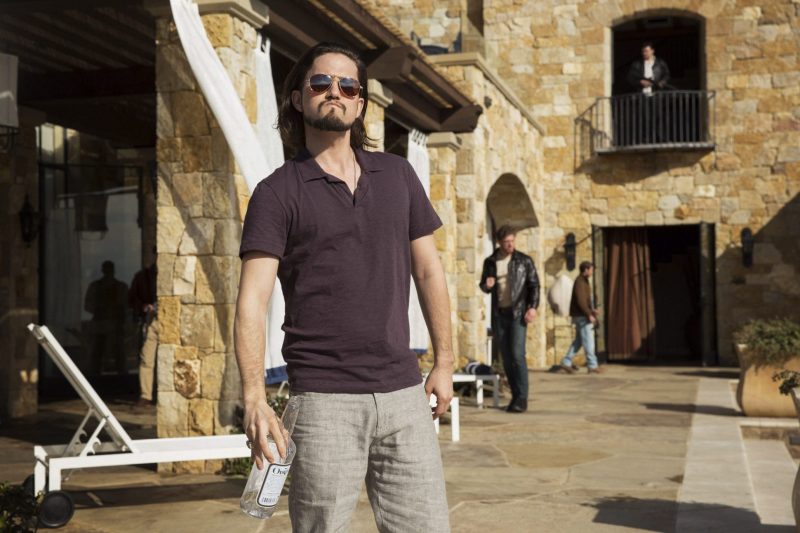 The Last Ship 407 – Feast – Giorgio (Jackson Rathbone) is sick of his dad yelling at him, so he throws a party. Image by TNT copyright 2017.

Chandler would act as utility super-officer, both on land and at sea – As predicted, Chandler advised at sea last week and took part in the raid this week. Since he fits into no specific place on the James, he then has to fit in everywhere on the James. As usual, he excelled in everything.

More action – This should probably remain a current prediction for the rest of the season. With only three episodes left in the season, the Nathan James has a lot of work to accomplish to get back on mission. Now that they know Vellek’s lab resides aboard a ship, they will set out to find it. I expect that process to take an episode, but you never know. They could start next episode with, “We found it, captain.” Since they can’t engage the ship, they will need to board it. Vellek, his minions and the Greeks will expect just about anything the James can try. Since Chandler’s back in the mix though, I expect an unconventional twist. Would it be irony if in the course of the mission, they come across Giorgio or Christos, take them hostage and then use them to bargain with Vellek (since the same thing happened to Chandler last season)?

The crew will uncover another layer to Vellek’s plan and it will be crazier yet – The combination of the medical ledgers from Giorgio’s office and the videos shot by Vellek himself partially answer a season-long mystery. The pit-fighting supplied Vellek with a pool of the most aggressive men he could find. These men would act as guinea pigs for his tests with a Nostos-infused treatment. With it, he claims he can sap a person’s aggressive tendencies at the source, making them docile and compliant. Chandler suggests Vellek has the intention to make distributing Nostos drugs to people his primary focus before he fixes the food shortage issue. Once everyone figures out the Vellek has set himself up as king atop a the only pile of edible food in the world, they will be too docile to want to re-balance the scales.

I take Chandler’s prediction further based on the premise of poisoned pita bread. I think he’s going to infuse his “safe” food with the Nostos. No need to deal with drug distribution if the drug is built in to the food itself. I suggest that people will eat their own undoing if Vellek gets his way. What do you think? 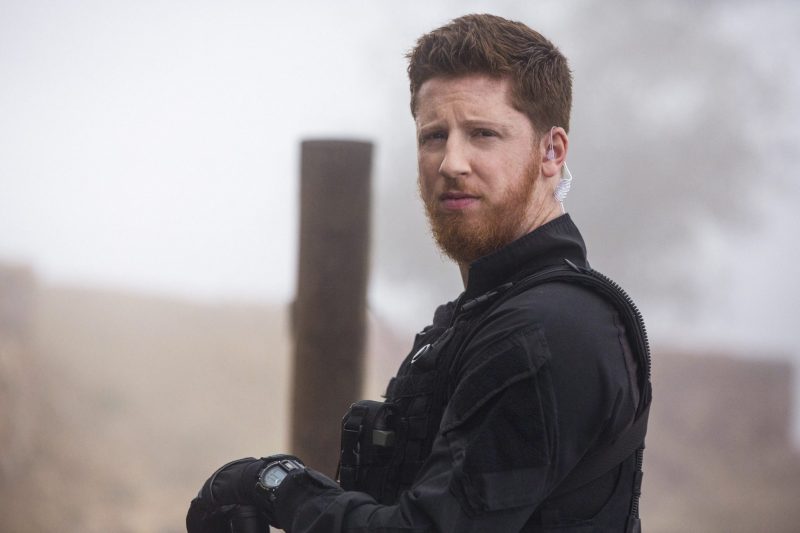 The Caligula head statue – a little history: Caligula was emperor of Rome from AD 37-41. During his short reign, he earned a reputation as a sadistic, sexually perverted tyrant on a mad quest to increase his territory and imperial powers. His time as emperor came to an end when his guards and the senate conspired to assassinate him. And Giorgio wants to keep a statue of this guy in his office?

How did Azima know to wear a sexy bikini under her combat gear? Is that a normal thing? Could any one of them have volunteered because they were all wearing sexy bathing suits?

So, Kathleen and Diaz. That’s cute.