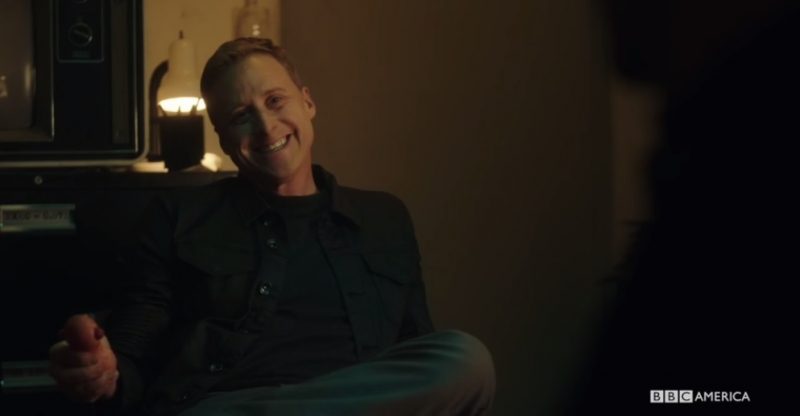 Last time on Dirk Gently we were left with a lot of questions.  A LOT of questions, really.  This is Dirk Gently, after all.  The biggest thing I was left lacking from the premiere was Dirk and Todd being reunited after Dirk’s kidnapping at the end of season 1.

Last night fixed that, and in the most adorable way.

“Fans of Wet Circles” didn’t have a lot of action in it, which for Dirk Gently is okay because it allows us to know the characters better – especially the new ones.  Since that was where we got all our development in, we’re going to focus on them in this week’s review, and feel free to comment about your own theories after!

First up, let’s start in Wendimoor where we have Silas who not only is a prince and in love with Panto Trost, but he is probably the worst liar in all of Wendimoor.  We’re only seeing him in pieces, but this week we learned that he is the only thing standing between his queen mother destroying the Trost family.  He believes in the prophecy of “Dirk Gently” though: whether it’s because of Panto’s firm belief that makes him believe, or something he believed in independently of Panto is still yet to be seen.  Either way, his mother doesn’t share the same belief and believes that he’s a “loser”.

We also learn that Wygar’s loyalty to Silas will only go so far, though it is hard to say whether he felt the truth was better than the lie Silas was badly spinning to the queen.  An argument can strongly be made that he took the fall for Silas letting Panto go so that the Queen wouldn’t kill her eldest son.  Or it could be simply that he didn’t want to lie to his Queen, especially for a son who is snogging the son of the enemy.  Wygar is going to need a lot more screen time to show us more about him – and maybe the meaning of all those buttons in his beard.

Back to “reality” where we first have Sheriff Sherlock Hobbs.  I like Hobbs, and I feel like he is taking the place of Estevez this season as the law enforcement agent pulled into Dirk’s crazy world (as opposed to Tina who is more like Zimmerfield).  His good-natured heart makes him want to understand and help with everything that is going on – especially since OMG there is something weird happening in Bergsberg!  Because yes, finding a dead body in a car in a tree fifty years after going missing qualifies as weird.  I also feel like Hobbs is almost a representation of the fans in which he’s being told the story of season 1 and how he gets it, and wants to be a part of the mystery and help the team out.  Let’s be real, how many of us have little notebooks we write in trying to keep track of all the clues in the show?

Dirk’s theory of how everything is connected links directly to Hobbs.  Being in Bergsberg has put them in a position to start on their new case, but also helping Hobbs and Tina on their case.  The real clue of his connection to this comes when Hobbs pulls out a medication bottle.  Hobbs just happens to have the medication that Todd needs at the exact time that Todd has run out of it.

Tina comes off more of the drunk, goofy sidekick.  She and Hobbs both want to get involved with the strange case that has come to them, but her focus shifts to learning of Todd’s connection to his band Mexican Funeral.  Knowing how even the smallest things are connected in Dirk Gently, you have to wonder how much the old band is going to keep coming back as a way of connecting people to Todd.  Or hanging off him like a groupie, because Tina pretty much declares that Todd Brotzman is a god.

Oh Tina, wait until you meet Amanda.  Who, by the way, has another vision.  Thankfully I got a gif of the vision this time for you all to analyze (good luck):

Then we have the Mage, who beyond the problems he’s creating in Wendimoor, you have him staying at the creepy house of the Cardenas (the dead woman in the car).  We learn that the house had a weird power surge in 1967 that did a lot of damage to the house and farmlands and that the Cardenas went missing right beforehand.  There is a husband and wife, and possibly a child?  Which of course leads one to believing that perhaps this missing child is the boy they are looking for.

My theory is that the house is where the portal to Wendimoor exists – and I’m going to place my bet on the Mage is actually Mr. Hector Cardenas (as opposed to the hand in the tree) and his magic is responsible for the electrical pulse that basically destroyed Bergsberg. So does that mean that the boy Dirk is looking for is the Mage’s son?  And could Panto Trost actually be that son?  Otherwise, if the hand in the tree

Next is our first appearance of Mr. Priest (Alan Tudyk), who is very creepy and probably the advice giver that Friedkin needs, and should stay the hell away from at the exact same time.  He’s the one who is responsible for bringing in 38 of the 42 subjects from the old project, and is more than willing to go back out and find the rest because it was fun for him.  He’s not a very ethical person and admits he’s a scary monster, but he also tells Friedkin how those above him will see his current situation and how he can fix them.  All he needs is for Friedkin to “pull the trigger” – which we know our cinnamon boy will because he is an idiot.  I fear for our team because once his sights are set on recovering Dirk, it’s going to get messy.  I don’t see Mr. Priest as taking anything lightly, or sympathetic at all.  He is all business, enjoys the hunt, and I’m pretty sure he won’t worry about a little torture to get more information if needed.  Vogel and Amanda better be careful when they get to Montana, because she saw him in her vision there, and he didn’t look happy.

And finally, Suzie.  Suzie with the wand is pretty much all of us when we find a magical way to fix all our problems.  Spell to take off a few pounds, get rid of all those zits and wrinkles, bye bye aching body, and yes, let’s roll in a pile of money after having cleaned the house.  But then we have the final scene of the episode with the dog, and that brings me back to a conversation I had while livetweeting about how absolute power corrupt absolutely.  Bob is a jerk, yes, but she uses a spell to take away his willpower and turns him into a puppet, and then telling him to silent the dog.

Bob has hinted at this accident and how her being nice is a “kick” after what happened, and how that self-improvement persona isn’t her.  We start to get hints of that when she snaps at Scott while in the bathroom, and then after Bob gets rid of the dog.  These moments reveal to us that Suzie isn’t the sweet, lovable person that we were shown last week, and I’m curious now on just who Suzie was before, what this accident was, and how the corruption of the magical power is going to feed into that old self as part of the season.  Plus, all magic does come with a cost – so the final thought tonight is all of this magic Suzie has used: what is it going to cost her in the end?

Remember to comment below with your theories on the newest cast members to Dirk Gently and let’s discuss where we think the season is going to go.

Make sure you join me Saturday at 9pm EST / 8pm CST on twitter at @ThreeIfBySpace when I live-tweet along with the East Coast airing of Dirk Gently’s Holistic Detective Agency on BBC America. Don’t forget to subscribe to our site to keep up on all the latest on Dirk Gently as well as your other favorite sci-fi and fantasy tv shows this season. See you next week!