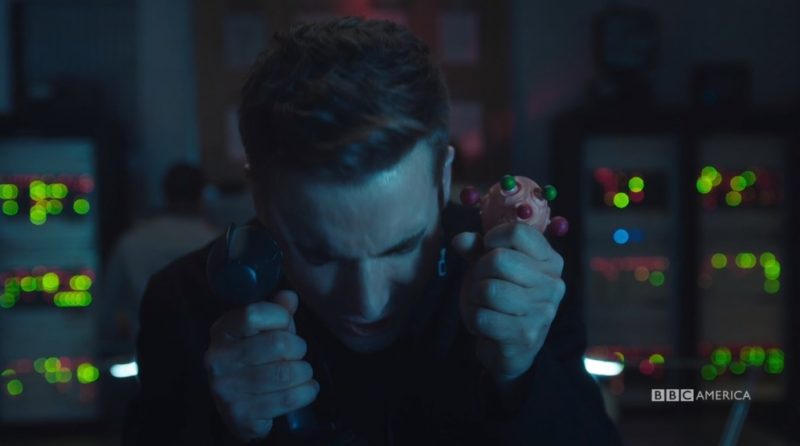 So last week on Dirk Gently, we got a great insight into our new characters, and this week we start to see the origins and building of the conflicts for this season.

Since we always start in Wendimoor, why break tradition?  This week we get to see Panto’s pink haired sister Litzibitz (Anja Savcic) and elderly father Jeppum Trost (David Allan Pearson) discussing the aftermath of the farming village being burnt to the ground – most likely by Queen Dengdamor since she threatened it last week.  But Panto’s father believes that the Dengdamor killed Panto, and that anger is fueling his rage, and so he’s turning to the Mage for help seeking revenge.

Because yes, giving semi-automatic rifles to an angry mob really gives a bridge to a peaceful resolution.

Litzibitz has a point though, and it becomes the link between the problems of Wendimoor and Dirk’s mission from Mona – “Find the Boy”.

In Bergsberg, Dirk seems to have an issue with dealing with Todd, Farah, Hobbs, and Tina carving out Hector Cardenas (who so far is a separate person from the Mage) from the tree, and then dealing with Bart and later Panto.  Todd points out that Dirk is being weird about the case, and he tries to change the subject to Todd’s pararibulitious and why he has it.  Turns out Dirk had been hoping when he got out of Blackwing that he would have a calmer, better life to come back to but instead everything is the same.  “Fate and Chance don’t cancel each other out,” Todd tells him, and reminds Dirk that he’s not a pawn and doesn’t need to let the universe push him around.  If he wants answers, he needs to take control of his life.  This is going to become important, I think, as Dirk starts to try and take control of the crazy around him, and not just try and connect it all.

Panto tells the story of the prophecy to Dirk & co. at the Sheriff’s station – in particular about how when the great, dark wizard found his apprentice, no one would be able to stop him and that the only thing that would be able to save Wendimoor is if the fiercest of foes were united, the great weapon is retrieved, and she who sees all opened a door into a dream, allowing a man through who would bring with him a boy – the boy who would save his world.  Suffice to say, Panto doesn’t know what any of those things or people are – not going to make this easy for you Dirk – but he does know that the man who can bring the boy and save Panto’s world is named “Dirk Gently”. 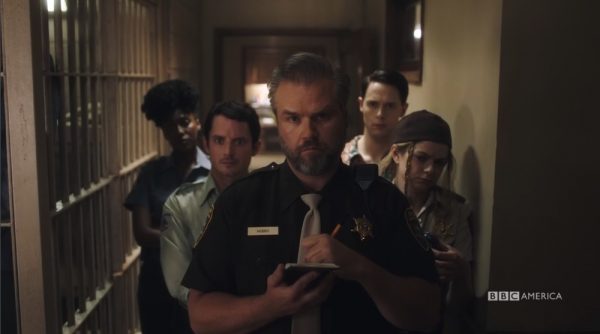 We can make some assumptions on who certain people are:  we know who the great, dark wizard is (the Mage), and we can assume Suzie is gearing up to be his apprentice.  In this episode, Suzie is off at a book club that she hasn’t been to in a while.  We see through her “friends” what the person Suzie used to be before the accident – driving the school carpool high on zantax.  They point out to her that she is “the bad guy”, and seeing that the other women aren’t fooled by her changes Suzie uses her wand to – well do something to them that we should hopefully find out next week.  I highly doubt it’s going to be good.  If that wasn’t enough, she then ends up in a tug of war with the Mage over the wand and is lucky enough to flee – for now.

Now, the “she who sees all” I’m going to go with that being Amanda due to her visions.  And speaking of Amanda, meanwhile, on the Blackwing side of the season, Vogel and Amanda find their way to Bergsberg and to the Inn – Room 18 for those following Amanda’s visions – and discovers that it’s the room Todd and Farah were staying. The Rowdy 3 van appears, and thinking that it’s the rest of the crew, the door opens to show Mr. Priest.  Mr. Priest points out that the Rowdy 3 went crazy only after adding in the fourth member, and he tries to convince Friedkin that it would be better to just kill Vogel and Amanda.  There is a confrontation at the Inn that gets Vogel injured, and Amanda knows there is someone else who is supposed to step in and help them.  She pleads for them to arrive – and Vogel and Amanda disappear before the bullets fly.

Friedkin is in over his head and he knows it.  Maybe his teaming up with Ken to decrypt the floppy discs will give the sweet cinnamon boy a path to getting out of the mess he has made.  I’m not sure where the Blackwing side of the season is going to go, but from Mr. Priest’s reaction to Amanda and Vogel disappearing – it will probably get a lot worse before it gets better.

Panto’s story gives us a firm path on what needs to happen in the story arc in the remaining episodes of this season – at least on Drik’s side of the story.  We still need to know who the foes are that need to unite (is it the Trosts and Dengdamors, or is it an element of Blackwing working with Dirk?), what the great weapon is (I’m thinking the air gun they were playing with last week), and just who the boy is – someone I’m sure we won’t see until later this season but I’m betting the hand coloring on the wall belongs to the boy.

And here is my obligatory scissor sword reference for the review @DirkGentlyBBCA (hopefully the boy is coloring me a map on how to get to Wendimoor): 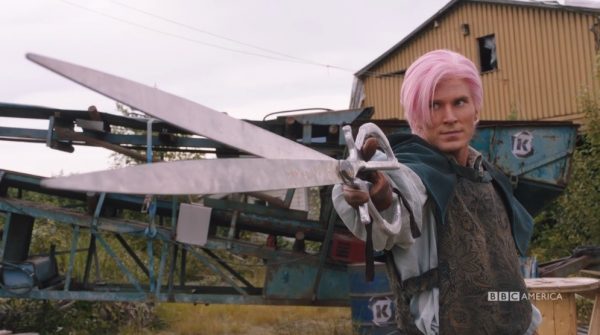 It cuts, it stabs… but does it make julienne fries? Credit: BBC America

Make sure you join me Saturday at 9pm EST / 8pm CST on twitter at @ThreeIfBySpace when I live-tweet along with the East Coast airing of Dirk Gently’s Holistic Detective Agency on BBC America. Don’t forget to subscribe to our site to keep up on all the latest on Dirk Gently as well as your other favorite sci-fi and fantasy tv shows this season. See you next week!