Four days until Dirk Gently’s Holistic Detective Agency returns to BBC America.  Four days before the madness starts once more, and the two men we talked to at SDCC are the ones to blame (or love eternally). Max Landis is the creator of and head writer of Dirk Gently, having adapted it for screen from the Douglas Adams’ novel of the same name.  Robert Cooper serves as the executive producer (aka makes sure everything is done on time and within budget, among other things).  Together, they serve as the powerhouse that brings together the story and production of Dirk Gently that keeps us, the fans, begging for more. Which begs us to ask…

How are you going to top season 1?

MAX: Easily. We are going so much stranger in the subject matter, sillier and weirder and wilder in the plot, bigger in the action, and the character arcs this season just pick up right where you left off and take you in a completely different direction than you see these people going. I mean, like, it’s a whole new show. But it almost feels like a sequel more than a second season, right?

ROBERT: Right. And producing it was like that too. We had to start from scratch.

Tell us about your working relationship. What is the biggest creative disagreement you’ve had?

ROBERT: Do you watch MMA? Have you seen Thunderdome?

MAX: I don’t know that Rob and I have had a creative disagreement that lasted. We have had a lot of intense disagreements in the moment, usually having to deal with the few places Rob and I butt up against each other are really weird and they’re not creative. Which is… Rob’s worked in television a lot longer, and he’s usually right. But I have a to b to c things, which are like, that can’t happen because this can’t happen because this affects this. And Rob will go, no let’s just change it and change it back. Or he’ll go, let’s just change it and no one will notice. I would say, on record, 7 out of 10 times he’s right. But the nice thing is, the remaining three times, he lets me have my way. So the  times when I’m right, I get vindicated.

How would you score that out of 10, Robert?

MAX: (Laughs) Flatly, I couldn’t do the show without Rob. I’m a speedball of ideas, and I just have this giant family, here’s a million things, and Rob comes in with all his stuff, and it’s just … it’s a matter of the fact that Rob is, I’m not going to say an adult, because he’s not, he looks less colorful than I am, but he’s equally as eccentric and bizarre, it’s just that he’s done this for so long, and he’s so smart about it, and so smart about handling people, and talking to people.

ROBERT: Yeah, sometimes it feels like Max is down right on the chess board, running around, fighting with all the various pieces, and I’m able to take a little more top down view…

ROBERT: and say, here’s a strategy of how we need to go about achieving this the best way we can, because at the end of the day, television is really… unfortunately, dominated by the restrictions of time and money. And so Max’s imagination has been somewhat unfettered in the feature world.

MAX: Has it been unfettered?

ROBERT: In it’s original conception. Creatively, very fettered, but the fact is that there’s only so much we can do. That’s not only scope or budget, but it’s just time and what we’re able to handle in a schedule. You can see it in the show – the show is very vibrant. We have tons of different storylines, tons of different characters, there’s a lot going on. There’s never a scene where there’s just two people talking in a room. There’s always some gag or prop or something important that’s connected to our…

MAX: I always have 5 or 6 things happening in a scene. 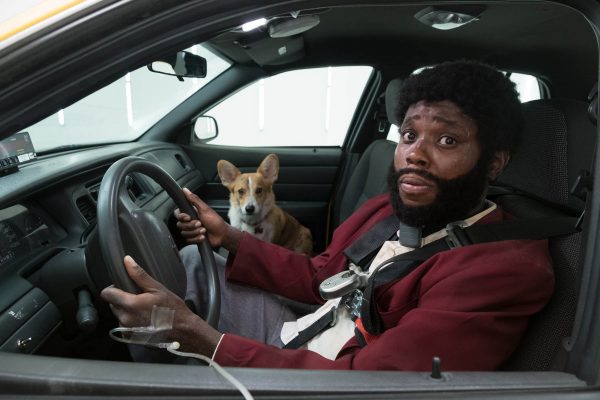 ROBERT: The show has a bit of ADD. But it works, you know? It’s a matter of being able to contain all that into something that’s manageable.

MAX: You say that, but occasionally, Rob goes, just do it, it’ll be fine.

ROBERT: But you have to. The fact is, with television, there’s a weird force that pushes everything back towards the middle. If you don’t push it, if you don’t say let’s do it, let’s try and do the impossible, you never do anything special. It always ends up mediocre. You have to push the envelope, you have to take chances. Sometimes you end up failing, but more often that not, it’s the only way to get anything good.

Can you talk a little about your first moments with Dirk Gently? Did you read the book, did it explode in your head?

MAX: You never told me there was a book! No, I was at summer camp, and the summer camp had a library. And the library had a book called Long Dark Teatime of the Soul. I was 14, I think. And I read Long Dark Teatime, not knowing it was the sequel to Dirk Gently’s Holistic Detective Agency, and I absolutely loved it. It was unlike any book I’d ever read. And I couldn’t believe how great it was. And I stole it from the library at the summer camp. And when I came home, I went to a Barnes & Noble, because the internet didn’t really exist yet, and I said, “Do you have any other books by this author (Douglas Adams)?” And they said, “well, that’s a sequel to Dirk Gently. But do you really  not know what Hitchhiker’s Guide to the Galaxy is?” And I was like, no, so they didn’t have the book, so I bought the audiobook narrated by Douglas Adams. I immediately read all of those that were available at the time, and then I read the first Dirk Gently, and in a lot of ways, they informed how I read science fiction from then on. And that’s my first encounter with the character. How about you? Was it through me? Was it my pilot?

ROBERT: I read his pilot, and I was like, huh!

MAX: No, that’s huge! For Rob, that’s like screaming. I gasped when he did that.

Miss our other SDCC interviews? Catch up here: Elijah Wood/Samuel Barnett; Hannah Marks/Jade Eshete; Mpho Koaho/Fiona Dourif; and Alan Tudyk/Tyler Labine.  Make sure you subscribe to ThreeIfBySpace.net to keep up on all your Dirk Gently news and follow us on twitter @ThreeIfBySpace for livetweeting of the season premiere. Season two of Dirk Gently’s Holistic Detective Agency premieres THIS Saturday, October 14th at  9pm EST / 8pm CST on BBC AMERICA.