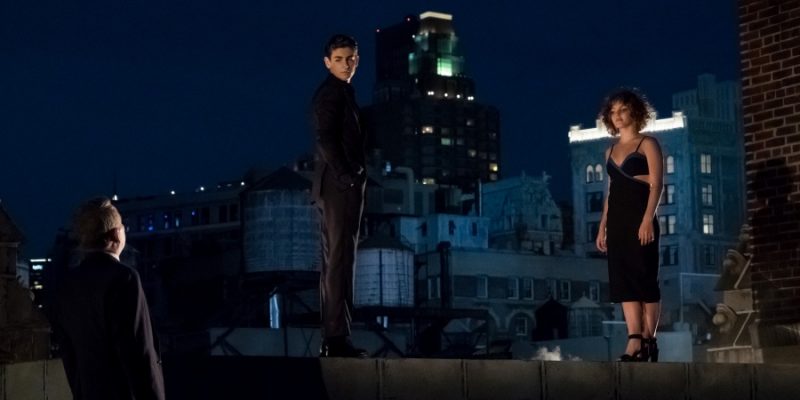 Gotham season four is here and change is coming.  This is my recap and opinion of what has happened so far in season 4. To see our SDCC interviews with the cast click here!

The end of season three was a mess; a lot happened and essentially Gotham has turned into a different city.  Penguin has created a new era of crime.  Everyone who wants to commit a non-violent crime must obtain a license.  There are rules to these new crimes therefore breaking the rules brings Zsaz on the scene.  You do not want to mess with Victor Zsaz.  He is a mean killing machine.  I wonder how much Penguin is paying him?  It has to be a lot considering all of the errands Penguin is making him run. 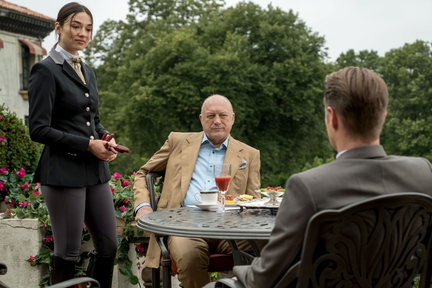 Fall of the GCPD

A license to crime is an interesting concept, this new world seems to work well for Gotham.  Of course, this makes the GCPD obsolete.  In Jim fashion he has a hard time accepting this.  For answers he turns to a surprising source: Falcone.  Falcone was the true king of Gotham and when he was in power everything was in its proper place.  Jim had hoped to call upon him to get the Families back together to stand against Penguin.  Falcone puts Jim on the spot.  He calls him out asking whether Jim is trying to regain control for Gotham’s well-being, or for his own.  Jim, of course, doesn’t admit that this is about him, but it really is.  He hates the loss of power and he hates how the GCPD is not longer behind him, but he won’t admit that to Falcone, or anyone for that matter.

To his dismay Falcone denies his request, because he is dying, and Jim is left helpless, or so he thinks.  He finds an unlikely ally in Sofia, Falcone’s only daughter.  She forgives Jim for what he did to her brother.  She even said that she knew about the virus, which is weird.  How does she know?  I absolutely love her!  So far she is  one of the most interesting characters recently introduced.  I love that she can outwit Jim and I really am looking forward to seeing what they’re going to do together.  Check out our discussion with Ben McKenzie on his thoughts about Jim this season here 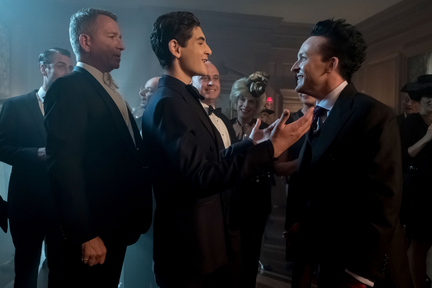 I really like the way the show is handling the early form of Batman.  Bruce as a young vigilante is actually really endearing.  When Bruce disappeared on Jim it made me giddy because it is the first time of many the Bat will do that to him.  He gets into a bit of trouble at the end of episode one and luckily Jim is there to help him out.  I love what they’re doing with Bruce this season.  The transformation from naive youngin’ to clumsy vigilante and bratty billionaire is incredible.  Bruce and Alfred make a great team and it’s a lot of fun to watch them grow and learn the crime of Gotham together.  When Lucius gets involved it gets even better and when Bruce puts that mask on it is FREAKING ICONIC!  I was so giddy.  See Sean Pertwee chat with us here! 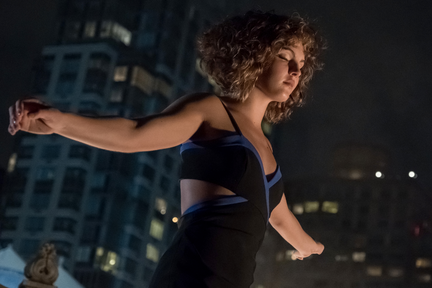 The gap they’re putting between Bruce and Selina is compelling.  It’s really starting to feel like their relationship is coming to terms with itself.  They still care about each other, but Selina is living a life of crime and Bruce is trying to prevent it.  I love the iconic game of Cat and Bat, it’s perfect.  I hope Selina gets out of this rut.  She deserves more than to be an errand girl for Barbara.  Check out our interview with Camren Bicondova here.

Poor Penguin has his whole opening night ruined by the Fear Juice and ends up looking like a fool in Jim’s arms.  The Scarecrow is awesome!  He is the stuff of nightmares; from his mask to his fear juice, it’s all so creepy.  I wonder where he went after his showdown with Jim.  Penguin’s power trip this season is so much fun!  I loved when he confronted Jim in front of the GCPD and called him out on not finding Scarecrow.  Penguin and Zsaz really do make a good team, even though the dynamics are bound to switch soon, it’s fun to see them play off of each other.  For Robin Lord Taylor’s take on Penguin watch the interview here! 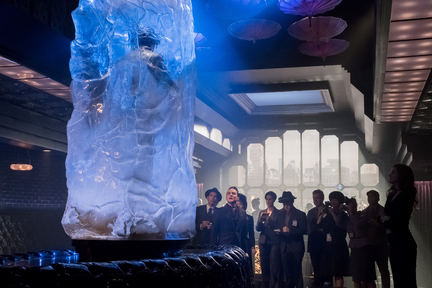 Poor Nygma!  He was a block of ice then turned paralyzed captive!  I was so confused who that girl was that unfroze him, but she turned out to be his worst nightmare!  She was absolutely crazy, however if it weren’t for her Nygma may never have discovered his flaw.  He now has the challenge of getting his brain back to how it used to be.  Cory Michael Smith chats about what that process is like in our interview here.  I really don’t like this Ed though.  I want him to be back to normal and firing on all cylinders.

Do I Hear Sirens?

I love the rumblings of Gotham City Sirens- even though we have no ideas who Barbara is going to be, if she is anyone from Batman lore that is.  I’m digging the idea that she is a new character in the Universe, it gives her a lot of leeway to be and do whatever she wants.  Her partnership with Ra’s Al Ghul is an interesting twist I didn’t see coming.  She has turned into a lean mean fighting machine and I’m thrilled to see her use those powers in the future.  Watch Erin Richards talk about training and more here.   I like how much she’s controlling the underbelly of Gotham and how Penguin doesn’t realize it!

Tabitha has forgiven Barbara, for now, and I think they’re going to be really strong moving forward.  I loved how much she took Selina under her wing, they had a really strong sistership!  Watch Jessica Lucas talk more about it here.  I do hope she gives Ivy a chance though.  I’m looking forward to seeing what the potions did to Ivy.  I hope they make her stronger and less ditsy because that was getting a bit annoying!

I am so excited about this season.  They are pushing forward at such a strong pace.  They actors are giving it their all and every character is starting to shine and become who they truly are.  I am looking forward to seeing where they go from here.  How does Ra’s Al Ghul fit into Gotham and who will defeat him?