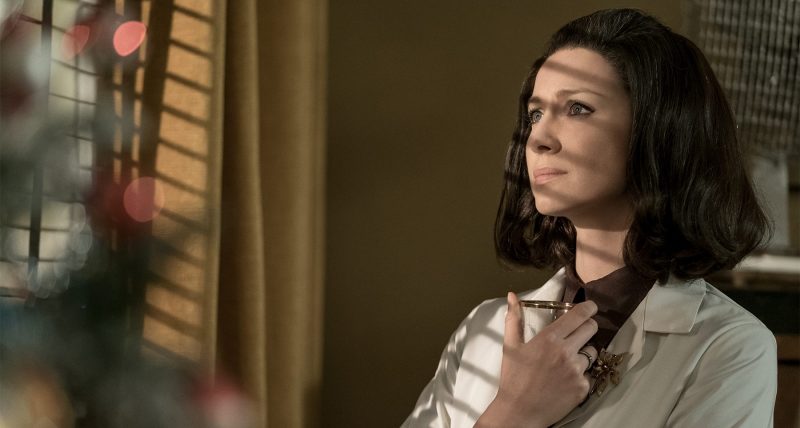 Most important decisions aren’t made in a snap – they take careful thought, a lot of worry, some doubling back… And Claire’s huge decision – to go or not to go – is no exception. Tonight’s episode didn’t have the big, far-reaching moments we’ve seen in other episodes, but instead is filled with lot of smaller moments that all lead to a major life change. So let’s look at some of those smaller moments!

Moment #1 – Yelling Can Be Our New Tradition

Welcome to the US, Roger! Yes, he says he came to make new traditions. He says a lot of things. But he really came… to see Bree.

I loved the use of the Joe Tex song, “Show Me,” as Roger gets out of the cab – much better than the expected Christmas music! Hearing raised voices at the door,  he wonders, did I make a mistake? Claire and Bree screaming at each other? The look on Bree’s face when she answers the door, though – no, no mistake, Roger, this is where you belong.

Unlike the season’s previous episodes, this one covers a short span of time – really only a few days – and it’s all spurred by Roger’s arrival. This is where Clalre’s mask really starts to slip – she’s been wearing one for so long that she doesn’t even realize it’s there any more. When she was in Scotland with Roger, looking for Jamie through the prison rolls, the mask developed a few cracks – Caitriona did this so well! She was a woman who couldn’t possibly get close to anyone – not her husband, her daughter, her colleagues – because getting close implies telling people about yourself, and how could she? But the truth shall set your mask free. Just being able to say Jamie’s name, and tell someone about her ordeal gave her a bit of relief. But only there, and only with these two people – and once she returned to Boston, and had to go out into the non-believing world, she had to pull herself together.

“I’m a historian. That’s what I do, I pursue,” Roger begins. And you can see the terror on her face – again, Caitriona does this beautifully. “I’m like a dog with a bone. I found him.”  The mask shatters, as it sinks in – her world will never be the same, no matter what she decides. 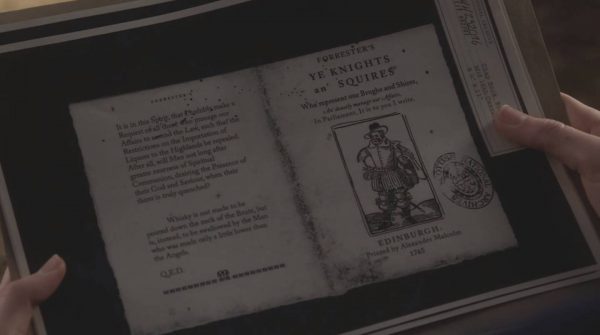 Every time there’s a scene pulled directly from the book, I think we all cheer. I would have liked it to extend a bit from the text – I was looking forward to hearing Joe quietly hum “Dem Bones, Dem Bones, dem… dry bones,” but I can live without it. What about that skull spoke to Claire, a “150-year-old murder victim”? And were you screaming along with me – “YOU DID IT!” Or will, or have…. Reconciling time travel events makes my head hurt. In the book, Joe tells the person who brings the bones in that Claire is the “best diagnostician” he’s ever seen – this goes a bit beyond diagnosis, and more into “white witch” territory. I just hope that as seasons go on, Ron & Co. pick up those other little instances of Claire’s bit of clairvoyance (uh huh, I went there). Otherwise, this scene won’t make any sense in the bigger picture. But it was a fun moment. 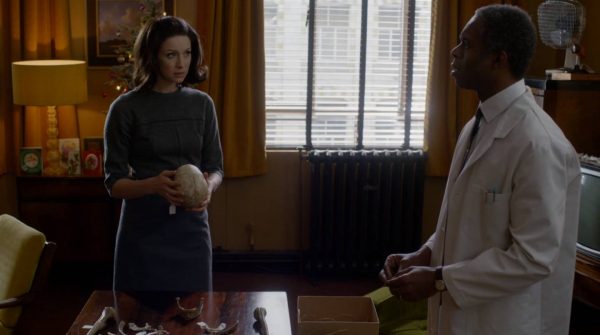 But this does segue into the friendship that Joe and Claire have, and his ability to read her a bit – he knows there’s been something that’s disturbed her sangfroid. And now that her mask is slipping, she has to tell him something – it’s getting harder and harder to keep it in. I was surprised that Toni Graphia had Claire admit that Frank wasn’t Bree’s real father! She was admitting to either infidelity or pre-marital sex, depending on whether Joe knew when they got married – and neither would have been accepted well in 1968. Without the rest of the story, she opened herself up for trouble, except that Joe is a good and true friend. Without  his encouragement, I think it would have been harder for Claire to make her final decision. And I loved his assessment when she asked if she was “attractive. Sexually.” “You’re a skinny white broad with too much hair and a great ass.”

Why was this here? What purpose did this serve, having Sandy confront Claire at the Harvard department function? We had our moment of Frank adoration at the beginning of the episode, as Bree, understandably, misses her father, picks up his pipe, strokes his chair. Why, then, did we have to have a moment of seeing Frank as an adulterer and liar, and seeing Claire tortured like this? No, she wasn’t in love with him, but why did his mistress have to reappear? It’s obvious that, in the series version, Frank lied to Sandy and told her that Claire wouldn’t let him go (but she’s probably right that a little bit of him was always in love with Claire), rather than the truth, at least as we were shown, that he refused to accept Claire’s offer of divorce. 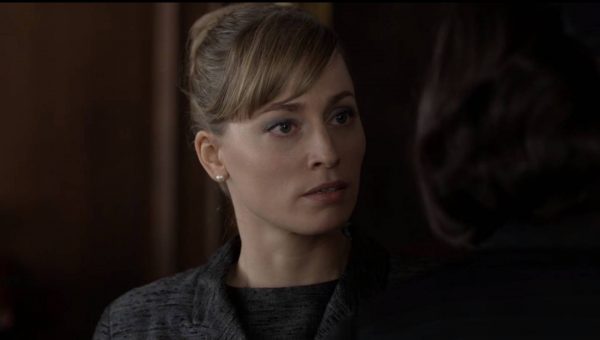 The only real purpose this had was to lead to the “honesty” discussion that Claire and Bree have immediately afterwards (and what happened to Roger? Did they just leave him there?). So Bree now knows that the father she adored was a liar and a cheater. And why? Frankly, none of this made any sense to me. 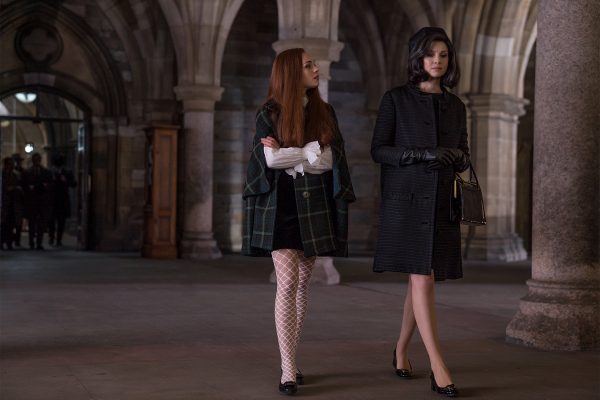 I haven’t been sold on Sophie Skelton as Bree. She’s been too young and unconvincing in this role, which really calls for a strong personality that she just doesn’t have. She and Rik Rankin haven’t had a lot of chemistry – the budding romance just didn’t look plausible – until this episode. I’m still not completely convinced, but she had a much better range here than before. Of course, Bree’s emotions are all over in this one – anger, fear, sadness, beginnings of falling in love, courage for her own future and support for her mother. Bree’s story going forward is not an easy one, and I hope Sophie is up to the task. Otherwise, her performance could put a wet blanket on several seasons to come. 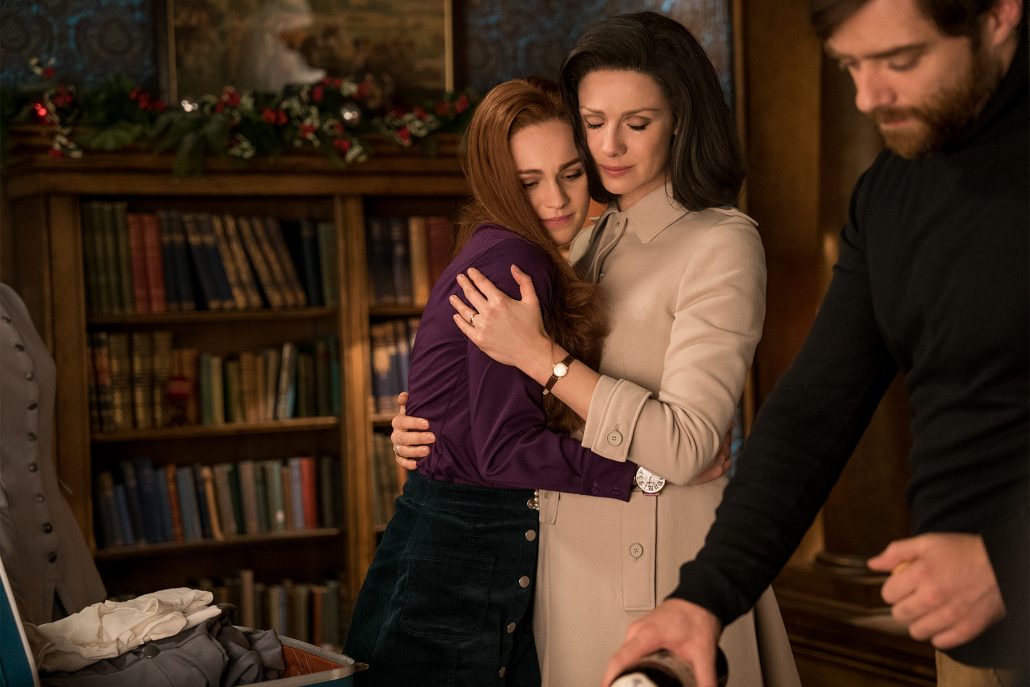 Moment #4 – Houston, We Have a Broadcast

This is one of those moments that, on its face, was just fine. Except that in the book – and I don’t care if you say “give up the book, this is an ADAPTATION” – the astronaut moment comes later, after Claire leaves, and it’s with Bree and Roger and Apollo 11, not Apollo 8.

This is one of those scenes, as I said, that makes me afraid that important moments won’t be used in this ADAPTATION. The whole thing with Roger coming to Boston now, and this scene happening NOW, makes me wonder if they’re planning to drop an entire aspect of Roger’s character. And that would have repurcussions throughout the series. Rik Rankin has even said that the producers haven’t yet asked him to sing, even though he’s very talented in that area, and one would think that was a part of the reason he was cast – Roger the singer is one of my absolute favorite things. His singing talents are vital to who he is, and how some storylines progress. So I hope I’m projecting, but I’ll have this worry as we go forward.

This scene did, though, lead to a very nice use of voiceover, expressing Claire’s fears. “How do you take a leap like that,” Joe asks, about the astronauts orbiting the Earth, “and come back to life as you know it?” Claire has had her own journey. “I had been, in many ways, further than the moon, on an even more impossible journey. And the answer was yes, you can come back to your life. But it’s never the same. But maybe it was enough to have gone once. How many people can ever say they’ve had that?” And that’s the decision she has to make – was it enough? Or is the hole in her life without Jamie bigger and more compelling than the hole she’ll create by leaving Bree? 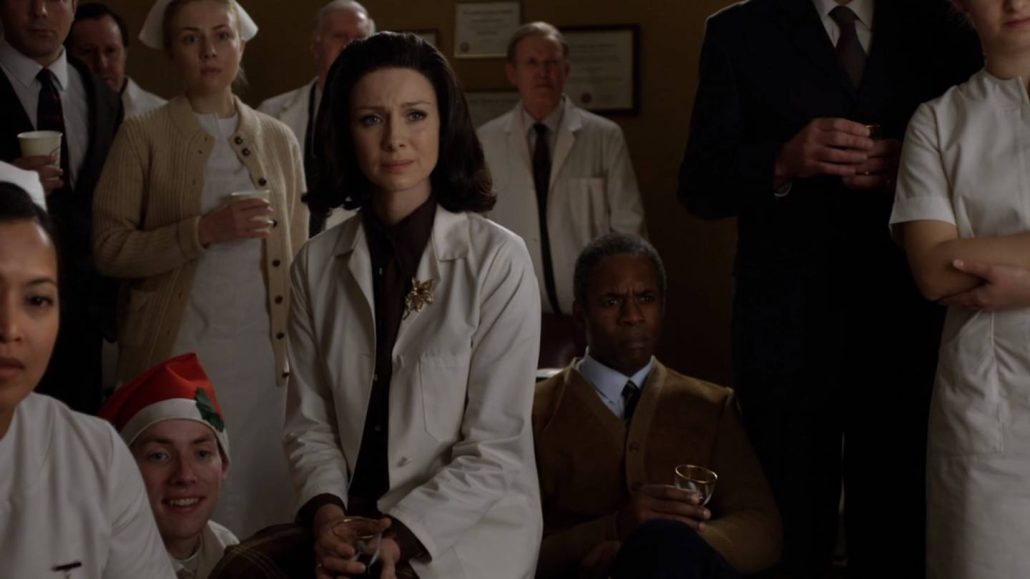 Decision made. Bree is ready. This year’s gifts – a History of Scotland, antique coins, a topaz necklace (and the clearing up of the very first episode’s big mystery, where did her watch go) – all designed to help. But there’s one big thing here that bugs me – nananana, no no no no! Sure, Roger’s turned into a TV junkie, and jokes that Claire is making her own utility belt, but did we need the Caped Crusader’s music? And outside of Project Runway, would anyone ever tackle that big of a sewing job in ONE DAY??? Yes, it was – she’s wearing the same striped top throughout the sequence. (I’m not going to argue this point… On Twitter tonight, Terry Dresbach said “of course she doesn’t, it would have taken weeks” and I’d agree, except – she wears the same shirt, and it’s still Christmas….) 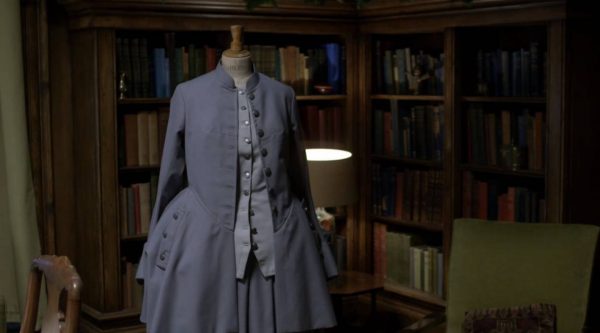 And we’re all ready, too. To those people who claim that the season has been flying by, that they’ve crammed so much into each episode, that non-readers aren’t going to get it because there’s too much left out – do you really want an entire season of Jamie and Claire apart? Even if there’s SO MUCH more of Jamie’s story that we would have loved to see? No, the heart of the story is Jamie and Claire, together. That’s where we need to be now.

However, I just want to add that even from the first episode, the way the trip through the stones is being handled – glossed over, barely mentioned, and in this instance, completely skipped – bothers me. It’s made to look easy, not the horrific passage Diana wrote. If it was that easy, what’s the problem with Claire jumping back and forth – to see Bree get married, hold that first grandchild, as she said? It’s not just the prospect of seeing Jamie that terrifies Claire – it’s the actual passage through the stones. And that’s just gone.

When I was small, I never wanted to step in puddles. I couldn’t bring myself to believe that the perfect, smooth expanse was no more than a thin film of water over solid earth. I believed it was an opening into some fathomless space. And if I stepped in, I would drop at once and keep on falling. Even now, when I see a puddle in my path, my mind half halts, when my feet do not. And I hurry on, with only the echo of the thought left behind.

This was a wonderful call-back to the transition in episode 201, of Frank’s hand reaching for Claire as they left the airplane in Boston, switching to Jamie’s hand reaching for her off the ship in France. Carrying through these little bits is a love note, and the puddle quote, which opens Voyager the book, fits perfectly here. Will these two people, removed by 20 – and 200 – years – be able to reconnect? As Claire reaches out to touch the print shop sign, you can see so clearly that this is not the same woman who lived for an eternity behind a mask – she’s ready to face her love with an open, if terrfied, heart.