With an episode titled “Magic to Make the Sanest Man Go Mad,” it’s reasonable to assume that the mad-hatter himself, Harry Mudd would return to play his part in what ensued. And indeed, that blessing was realized as Rainn Wilson’s reincarnated Mudd character returned to torment Captain Lorca and the crew of the Discovery. I, for one, was thrilled to see Mudd “muddy” up the waters for the crew. What a treat wrapped in a stale and moldy piece of bread. And yet, we enjoyed eating it, didn’t we?

We also got that most enjoyable of sci-fi tropes – the time loop. I give the writers full marks for creativity in putting us through our time loop paces, but the magic of this episode belonged to Mudd at every turn. As Captain Lorca, Michael Burnham, Lt. Stamets and Ash Tyler slowly came to realize what was going on, we were treated to a multitude of scenes of Mudd waxing poetic about what he was doing and why he took a particular joy in not only killing Lorca repeatedly, but the Discovery as a whole. 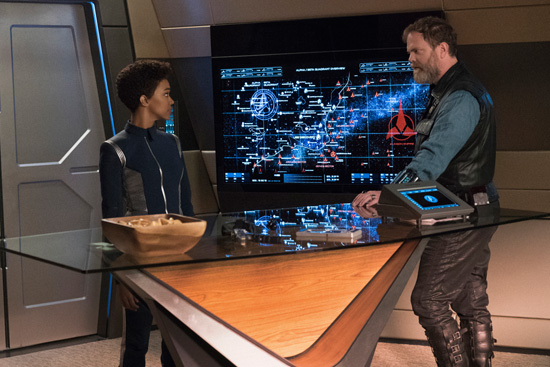 It was all part of a plan to slowly wrest the secret of the spore propulsion science from the hands of the Federation and sell it to the Klingons, thereby negating the Federation’s tactical advantage with Discovery, and reaping a nice dose of revenge (and reward) against Lorca and all who have stepped over, on or around Mudd throughout his life.

And Wilson brought the flippantly seething intelligence of Mudd to delightful life as we worked our way through loop after loop. From his first appearance strolling out of the insides of the “space whale” to his eventual defeat and reunion with wife Stella, Mudd mixed shrewdness with a selfish disregard for anything or anyone but himself – mixed with a concentrated hatred for Lorca, who you’ll remember left Mudd in the cell of that Klingon prison barge a few episodes back.

Yeah, this episode was a fun little romp for Harry Mudd and I enjoyed it thoroughly and give the writers a full “high five” for the many verbal nuggets that he tossed at Lorca and the crew with each new loop he created. “The solar winds are my mistress and I follow her wherever she beckons.” Sweet stuff, Harry. Sweet stuff.

I don’t know if this was the best episode of Star Trek: Discovery thus far, but I may have enjoyed it the most. For all the talk about a darker Star Trek, this episode delivered plenty of sly and subtle humor even as Mudd came closer to ultimate victory. He was defeated, of course, because Lt. Stamets’ exposure (and apparent continued comfort) to the spore drive left him immune to Mudd’s machinations. As with every time loop trope, there’s always that one unanticipated event, person or direction that resonates with someone, allowing the slow trickle of the truth of emerge and break the loop. In this episode, Stamets was the wild card. 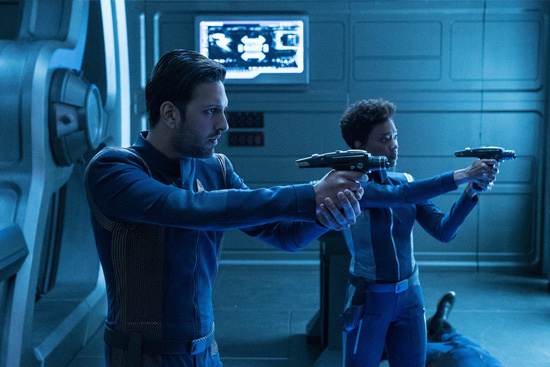 And hasn’t it been a ball to see how Stamets’ exposure to the Tardigrade spore system has altered his personality. Talk about turning into Mr. Sunshine singing a little “kumbaya” at the campfire. He’s come a long way from the tight, tense, arrogant lieutenant we first met in this series.

And he was central to this story as he worked out a fairly cunning plan to not only alert Michael to what was going on, but offer some ideas on how to defeat Mudd. While we’ve seen Burnham begin to change, Stamets has certainly undergone the most drastic transformation in our time together. When he used the word “groovy” last episode, I just about choked. So out of character from what we were used to, but more than a little fun.

For my money, Mudd and Stamets were the MVPs of this episode, but we got a little bit of interesting movement on some other characters, including a kiss between Burnham and Tyler. It was caught in the time loop, so while both acknowledged it, how best to proceed is yet to be determined. I don’t know how I feel about anything romantic developing between the two, but I’ll admit I was taken by surprise about the smooch. Where these two end up taking this burgeoning relationship, or if they take it anywhere, will be interesting to follow. 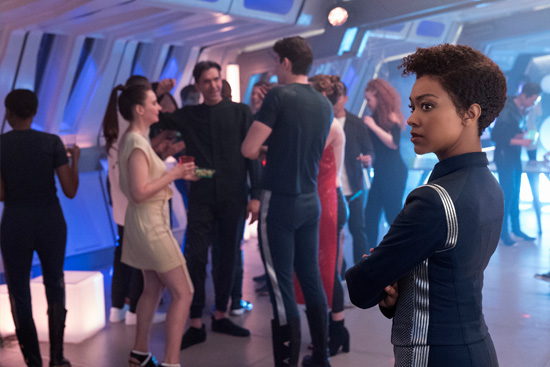 Michael Burnham tries to make sense of a party.

Of course, if you’re like me you’ve been reading a lot about this show, including a fan theory that Tyler is really the Klingon Voq, surgically altered to pass as a human, then planted in the Klingon prison barge awaiting an opportunity.

There are clues, of course, including his Klingon honey was in charge of the prison barge and they were lovers. There’s also the battle training session with Lorca where the captain said he fought like a Klingon. And, we have his quick and not-too-subtle flirtations with Burnham almost from the start. As we found out in this episode, the Klingons would love to get their hands on Burnham for her murder of T’Kuvma. So, we’ll see if Ash Tyler is who (or what) he (or it) appears to be. But for now, he’s clearly taken a shine to Burnham and she to him. Oh, and we also learned that Tilly likes to party. She’s on my next guest list.

There’s a certain rhythm to a time loop story that’s easy to fall into and I thought this episode did a good job of coming at the problem from a lot of different angles, building and building toward the solution, though it wasn’t clear what that solution was until the end. I thought that was a real positive. And then to stick Mudd with the wife he was running from was a nice touch. I have no doubt, with a second season on the horizon, there will be more Mudd encounters. And who wouldn’t like that?

For my money, Star Trek: Discovery has gotten its legs under it and even though we’ve seen many a tiime loop in sci-fi quarters, the gang did a nice job of adding some twists, turns and solutions to the mix. Well done.