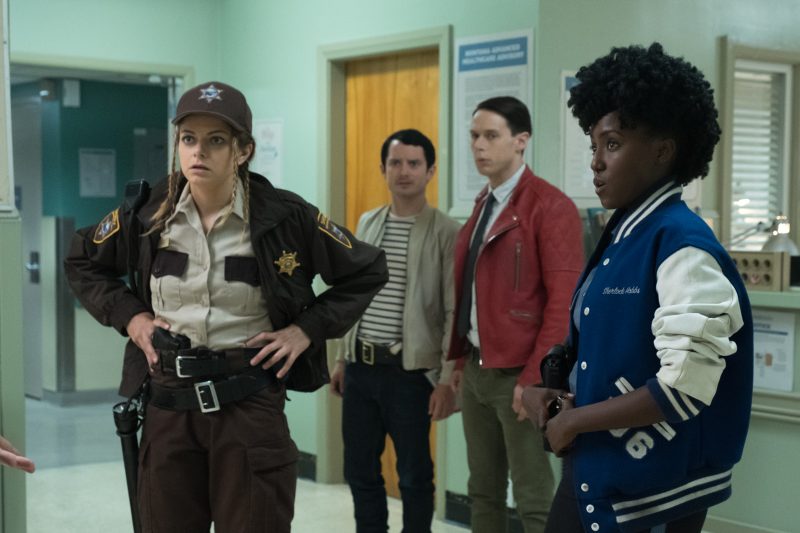 You know, I'm very tempted to just make my weekly review this gif and 300 characters of OMG YAY WTF NO over and over again. It would be the most accurate review. #DirkGentlyBBCA pic.twitter.com/QWvubFDnJI

I still maintain that this tweet is the best representation of 2×05 “Shapes and Colors”.  Now, as we head into 2×06, a lot of the storylines that had the collective Dirk Gently fanbase screaming at their televisions were answered and leading into the final four episodes of season two that Max Landis described as one big movie script.

Where do we even begin?  Well, since this episode is called “Girl Power”, how about we take a quick look at where the character arcs of the ladies of Dirk Gently stand at this point?

Let’s start with Amanda and Vogel being reunited with the Rowdy 3 in Wendimoor.  Two things of note in this part of the storyline: the first being Martin and Amanda have a nice moment where lets Amanda know that the boys are going to follow her now.  We already saw it earlier in the season where Vogel defaulted to Amanda calling the shots while they were running from Blackwing.  Now, free from the facility, Martin and the others are grateful to her powers to save them that they are in debt to her.  But there’s more to this than gratitude: Amanda cares about her boys in a way that they probably have not been cared for by anyone before.  That familiar feel makes the Rowdy 3 a family more than just a gang of friends, and Amanda and Martin are the Mom and Dad of the other three. 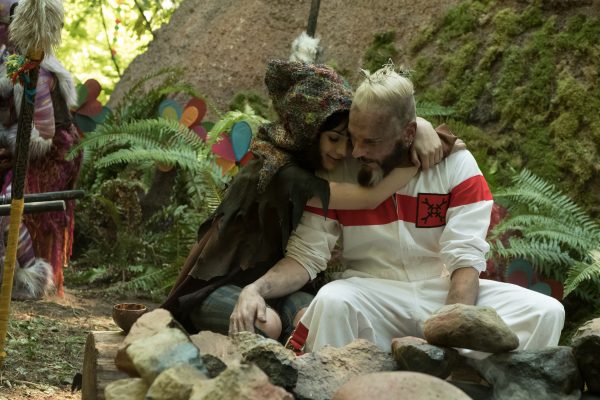 The second, and more prominent – is in Amanda’s continuing struggle with her abilities.  I personally love the strength that Amanda has developed with the Rowdy 3.  Her story arc of being theoretically the weakest character (in strength, not development) and having her interactions with the Rowdy 3 – as well as through ripple effects from Dirk, Todd, Farah and company last season – made her have strength in herself in season 1.  Now, with her getting control of her powers, vision, and disease – which she did so in a major way last night – continues to show just how strong and amazing Amanda Brotzman is.  She isn’t perfect and doesn’t pretend to be, but as she continues to gain faith in herself and see others believing in her to boot, she continues to find control over the parts of her life that made her weak, and turn them into strengths.

I don’t see Amanda ever returning to the person she was at the beginning of the series, but I’m hoping that all this growth will lead her back to forgiving her brother and finding a way to reconnect with Todd.  Maybe she will be able to teach Todd how to control his disease too, though I hope Amanda always stays the stronger of them.  This is her story arc, and I would hate for Todd’s story to overtake all this amazing characterization we’ve seen with her.

With Hobbs missing in action, Tina turns to Farah for help in dealing with this case.  The beginning of the season we dealt with a lot of Farah’s self-doubts about her abilities and legitimacy in her job.  Hobbs and Tina have given her the latter in allowing her to become a deputy and all but take lead in this case. We also got a taste of Farah’s feeling about how her father and brother’s disappointment in her has shaped her desire to prove herself, but as we saw in “Shapes and Colors” she is finding the strength from her time with Dirk and Todd to not care about their opinions, and believe in herself.

There is a part of me that worries that Farah will stay in Bergsberg at the end of the season, which could break up the Dirk Gently Detective Agency before it once again has a chance to start. On the other hand, the town could be a great place to set up home base, but depending on how the season resolves with Blackwing, staying in one place may be dangerous.  Plus, Tina seeing Farah as a second mentor and partner fills me with such joy.

Now I love Tina, don’t get me wrong.  I’m very happy to see a bisexual character on my tv screen and also being a character with authority in her world.  She is very slowly leaving from being a secondary comic relief character to having her own development arc (especially now that she is what, six-ish days sober?).  I’m torn between wanting to see her grow up and wanting to keep her the zany deputy we have come to love this season.  I still fear for her and Hobbs following in Estevez’s fate of dying at the end of the season and while it would open up a full-time job for Farah in Bergsberg, I wouldn’t wish it on either of them.

The story arc of Bart trying to “be better” about killing people and finding her own path in the universe is both interesting and worrisome at times.  While she has her own mind and being a ruthless killer, Bart has an innocent nativity to her that makes her precious and must be protected at all costs.  Her point of view, stemming from season 1, is that she is just doing what the universe wants her to do.  Ken was in the partnership to provide her a bit of a conscious – a little Jiminy Cricket on her shoulder.

And looking at where Ken is heading with Friedkin back at Blackwing – I’m not sure I want to see their reunion anytime soon.

However, Panto is giving Bart the guidance that she needs this season.  Bart, in order to move further away from a subject and more into her own person, needs to start making her own choices and not just letting the universe dictate what she should do.  Her interactions with Panto have shown that Bart has a compassionate, reasonable, and unique personality that has started to develop and he fosters her to continue to grow in her own way.

Now I’m not sure if Wendimoor is ready for Bart Curlish, but if she’s on #TeamPanto, the Trosts will take care of her, and maybe she will even flourish far from the grips of Blackwing and whatever Ken and Friedkin may be planning.

There is a black evil villain outfit waiting for Suzie in Bergsberg because whoa, girl, you have leaped off the deep end. 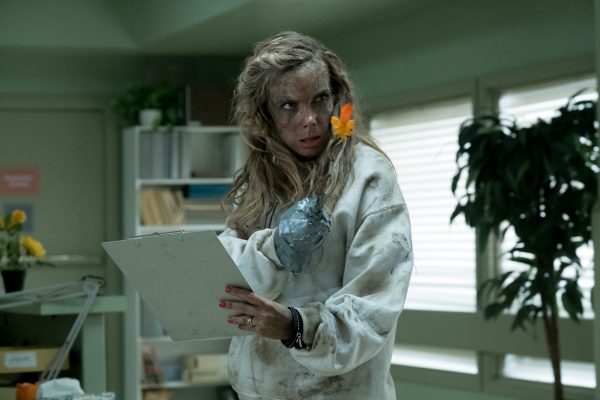 We have watched Suzie fall from grace hard and fast in the temptation of the power from the wand.  It wasn’t hard since she was a corruptible soul from her ego before the accident.  Her selfishness, topped only with her level of self importance, has made her into the perfect scary lady with a wand.

Amanda Walsh plays crazy in the most fantastic way.  The crazy eyes, her stance as Suzie returns to The Mage wanting to be sent to Wendimoor – over the last three episodes you’ve seen the progression of how her body language and voice have adjusted as she gained her powers.  Now, with the powers overtaking her sense of reason (I mean she killed a good number of innocent people in the hospital) she is morphing into something that barely resembles the woman from the first episode.

Is this murderous, power obsessed Suzie the true self coming through with no restraints?

Looking back at the first episode, we were introduced to Suzie and Bart meeting as Bart easily killed people around her in her way, and Suzie watched on in horror while being spared.  Now, in episode six, Bart is becoming less murdery while Suzie is letting the power guide her murderous rage with no one spared.  The position shift is noticeable, and with Suzie even able to survive being shot – the bets are on as to how Bart and Suzie will handle their eventual rematch.

Where will our amazing five ladies go in the last four episodes of Dirk Gently season 2?  Your guess is as good as mine, so stick around and come join me on Twitter at @ThreeIfBySpace next Saturday at 9pm EST / 8pm CST to livetweet the East Coast airing of Dirk Gently’s Holistic Detective Agency.  See you then!