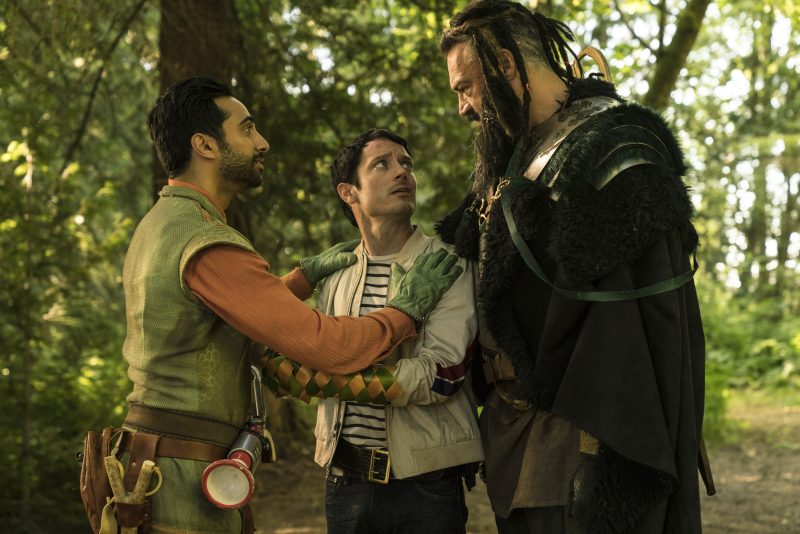 Dirk Gently 2×07 Review: This is Not Miami

Last Week on Dirk Gently’s Holistic Detective Agency, we were left with the fears that the Boy was dead, chaos was upon us, and would the optimistic Todd and soul-crushed Dirk actually arrive in Wendimoor?  What would become of our heroes?

There is a lot to process in this episode of Dirk Gently.  First, you have Dirk who, understandably, is dealing with a lot of emotional baggage.  No one has really talked to him about what he went through in Blackwing, and then he jumps into this case and trying to find himself again where he seems to keep failing, and then to watch the boy get killed – as well as a bunch of other innocent people – in front of him?  Yeah, it’s no surprise that Dirk is refusing to move forward.  I miss Dirk’s room lighting smile when he and Todd connect on something in the case, and to see him down like this makes me want to hug him tightly and promise to destroy anything that tries to hurt him.

But now with a “gurfre” to take care of “Bibbit”, which in a way seems to be exactly what he needed.  The Beast just lets Dirk talk himself through everything that is bothering him, prompting him along as needed and helping when he needs it.  She also takes the place of all of us who want to hug and pet Dirk’s hair and tell him he’s pretty and everything will be okay.

In the end, Dirk works through all his clues again and finds the missing piece he needed in Wendimoor to solve his case: the knowledge that Arnold wasn’t the only Cardenas son. A few connections further, and Dirk realizes he knows exactly who the boy really is.

For the record (and personal bragging rights): I called it back in 2×04.  After all, what would have been the point of introducing Project Moloch in the premiere if he wasn’t going to be integral to the plot?  Now how Dirk is going to get back into Blackwing to get Moloch out, and then get Moloch to Wendimoor.  Plus, if Moloch wakes up, what happens to the people from the main reality who are in Wendimoor still at the time?

The second big thing to process is the in-person reunion of the Brotzman siblings.  What starts off as a happy reunion between Amanda and Todd soon take a turn when they discuss what to do after the massacre at the bridge, then at Wakti’s village.  Todd wants to get out of Wendimoor and get his sister to safety. Amanda plans to stay and fight to stop the Mage and help find peace.  With their ideas on what to do next being so different, Amanda calls Todd out on being selfish and only thinking about what’s best for what he wants, and not what should be done.  Amanda, for those counting, is now 2-0 in Brotzman ethical standards.

Which leads to our last big thing happening in Wendimoor: Suzie Boreton is in Wendimoor and has taken control of the Mage’s forces.

Bow to the Evil Queen with Great Fashion Sense!

Upon arrival, Suzie goes right for Wakti Wapnasi and her little band of steampunk treasure trolls.  The book has told Suzie that Wakti is the only other magical being in Wendimoor, and because of that, she has to die.  Wakti, unafraid, points out that while Suzie feels powerful now, she will soon feel small again (something we learned in 2×06 that Suzie refuses to return to).  Obviously, the book doesn’t know about Amanda so it seems we may be heading into a showdown between Amanda and Suzie before the end of the season.

After killing Wakti, Suzie finds Lord Badevil not long after he triggered the bloody conflict between the Dengdamor and the Trosts (RIP Farson and Litzibitz, we barely knew thee). Suzie appears with the apprentice wand and earns their loyalty, giving her an army to take over Wendimoor and become Queen.  Lord knows where this is going next. Pretty sure Silas’ mom is going to object to all of this (and Queen Dengdamor is kinda scary lets be real here).

Meanwhile, this episode was very lacking of the Rowdy 3, as well as everyone else left behind in the real world.  Based on the next week promo video, though, we will be seeing what’s going on in both worlds.  Here’s the look at next week, which Max Landis has proclaimed his favorite episode this season:

Now that you’ve seen what’s to come, make sure you join me on Twitter at @ThreeIfBySpace next Saturday at 9pm EST / 8pm CST to livetweet the East Coast airing of Dirk Gently’s Holistic Detective Agency.  See you then!