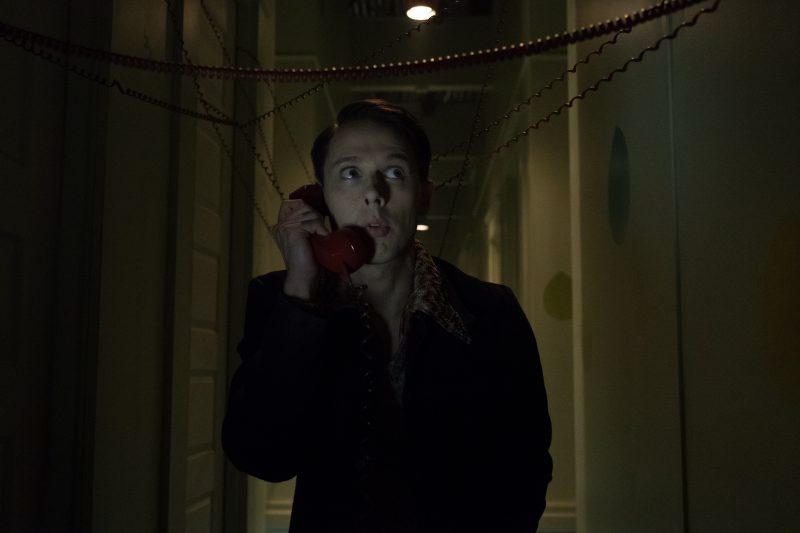 Dirk Gently: The House Within a House – Review

Last week on Dirk Gently, we were left wondering what happened to Amanda and Vogel, and just how Dirk was going to find she-who-sees-all to open a door into a dream as to bring the boy through it and save all of Wendimoor from the dark wizard who is seeking his apprentice.

Now to summarize “The House Within a House” – well, let’s just say that Dirk Gently fell down a hole and landed in a Hell that looks like neon Christmas threw up all over it.

This episode was pretty much the zaniest one so far of this season.  Between the witchakookoos, the longest phone cord in 70’s history, and the [bleeping] unicorn, Dirk Gently has found everything in a ten year old’s fantasy world and brought it to life on screen.

And let’s not forget the One Eyed, One Horned, Flying Purple People Eater.

So at the end of the episode, the wallpaper at the Cardenas home is pulled back to reveal the crayon drawings of Panto and his world – so it’s clear that the Wendimoor side of the plot was all designed on purpose that way – I mean really Lord Triangle Badevil (thanks Prince Silas for the clarification). This boy, whoever he is revealed to be, either came from Wendimoor into our world, or he is the one who created everything in Wendimoor.

Speaking of Wendimoor: Amanda and Vogel have arrived in Wendimoor which confirms to me that Amanda is “she-who-sees-all”. Her power is evolving, creating visible blue lightning that she can control and use as a weapon.  Amanda also has the ability to see through the break in the worlds to share a vision with her brother, letting Todd communicate with her before Vogel stops feeding and ends the vision for them both.  I’m so waiting to see how this sibling psychic link develops, and hopefully it’s not just a power she can only manifest in Wendimoor.

Now last week, I was reminded of how all the little details are clues that we don’t think about right away. For instance, I had a fun twitter conversation with another fan about what I thought was a continuity error with the color of the squeeze toy’s eyes changing from blue to green and back to blue again.  We were debating on how, if the color of the eyes signifies when Mona is shifted into the toy, how she would be able to get in and out while Friedkin was still holding onto the toy, which led into remembering there are other Blackwing subjects who we haven’t met yet and maybe they are involved.

Max Landis chimed in with this:

Worth saying: all of the Black Wing subjects have very hard to describe powers, a la Dirk and Bart.

So of course this week, my brain is hyper focused on two areas to look for more clues.

First off, the scenes with Friedkin and Ken.  Poor, poor Friedkin.  I’m waiting for the moment where he’s cuddling Rapunzel and letting the corgi lick his face so that he feels better.  Anyway, they are delving deeper into the archives and Ken has already found four subjects that have a power linked to making people disappear.

There are more subjects out there, and with Max saying that their powers aren’t as cut and dry as presented to us, you can guarantee meeting more new subjects either this season, or going into a season 3 (please BBC America, don’t leave us hanging and announce a third season already! Heck, give us two and I may even stop bugging you each week about getting a scissor sword…

Side note – I’m not sure I like how Ken was talking about teaming up with Friedkin to use the subjects.  Ken believes he knows how to get the Blackwing subjects to do what Friedkin wants.  He does at least believe that the subjects need to not be locked in rooms and that they are looking for meaning, but at the same time he slips and called the subjects “these things” and that gave me creeps.  It’s a slope of seeing the Blackwing subjects as being less than human, and I’m hoping that it doesn’t go in that direction and instead it’s Ken manipulating Friedkin until he can get himself free from Blackwing.

The other area I was hyper focused on were the background decorations in the neon colored Christmas Hell.  The area that I felt was the least focused on, but held a lot of clues was the polka-dotted hallway.  As Dirk was walking down it, there were five paintings on the wall.

The first two are of a boy – one wearing a cowboy hat with his arms up, and another is the boy holding out the air gun (that has yet to be checked into evidence by Sheriff Hobbs).  The third painting is of the Cardenas Motor Inn back in its heyday, the fourth is of the tree that they found the car in with someone standing under it, and the fifth is of the boat The Infant Male Pollock Francis on the sea.

The first two are pretty obvious clues as to who the boy is.  The other three – I guess we will see how it is all connected later soon.  I hope.

So speaking of the boy, the last thing we have to look at is the current cast and who the boy could be.  There are a few contenders we could look at – some are crazy theories of mine, and some there are legit clues that could link us to them.

First: It’s someone we haven’t met yet.  Just getting that out there that maybe there is a 10 year old boy still hiding in that neon Christmas nightmare.  There is a part of Amanda’s original vision that we haven’t see yet – the small clown standing at the end of the hallway.  Could this be the boy?

Second: Farson Dengdomor (Silas’ brother).  After all, his kidnapping is what started the current escalation of war in Wendimoor.  Could it be that Dirk needs to find him and bring him home to bring peace between the two families?  Amanda and Vogel are now fleeing from the mage’s knights with him, so there is that connection being made. 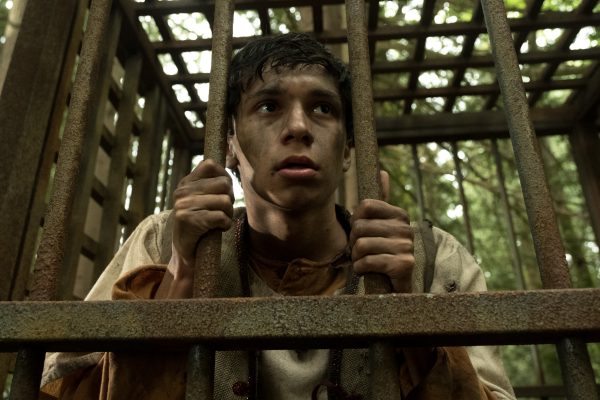 Is this the Boy we’re looking for?
Farson Dengdamor (Ajay Friese)

Third: Scott Boreton.  He’s not old enough, true, but his hair color – what is that red is all natural?  Least likely candidate, but that hair, man.

Fourth: Project Moloch.  Here’s my running theory on this I came up with last night: He used to spend time with Dirk Gently when Dirk was a child, never talked but always listened, and is currently in a coma so who’s to say he isn’t dreaming and everything in Wendimoor is part of the dream he’s having, and the dream is starting to merge with reality due to how long he’s been like this.

I’ve got a fifth theory about it being Sheriff Hobbs, but I’m not sure I can believe it myself without a big dose of memory loss in his past so we’ll just put a pin on that one for now.

Rumor has it that next week’s episode has some BIG THINGS coming, like Suzie’s fall to the Dark Side, and will hopefully start to explain what we know so far. Don’t make any plans but to park your butts in front of the tv next week to see what is revealed!  You know I’ll be there.

Come join me Saturdays at 9pm EST / 8pm CST on twitter at @ThreeIfBySpace when I live-tweet along with the East Coast airing of Dirk Gently’s Holistic Detective Agency on BBC America. Make sure you also subscribe to our site to keep up on all the latest on Dirk Gently as well as your other favorite sci-fi and fantasy tv shows this season. See you next week!