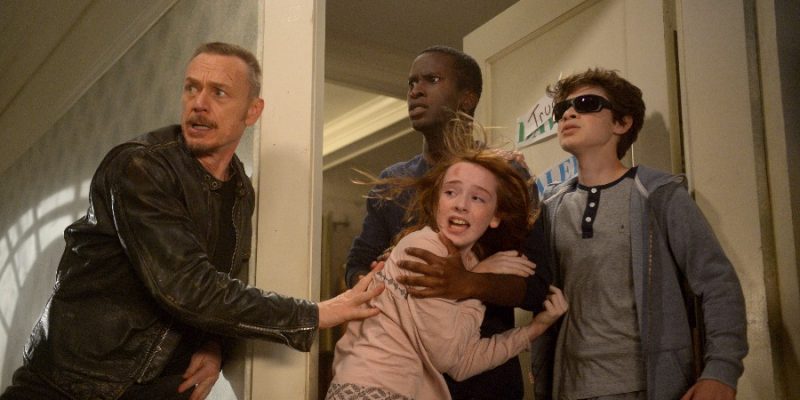 Every week I say it and every week it’s true, The Exorcist is pulling out all the stops with it’s second season, and Darling Nikki, is another episode worthy of the big screen. Just past the midway point of this season, Darling Nikki continues to lure fans in to discover the layers of madness that have been lurking within.After realizing Grace wasn’t strong enough to hold Andy’s mind any longer, the demon takes a new terrifying form this week, putting the entire island at risk. From the beautiful camera work, to the amazing script and the fantastic performances from all on screen, The Exorcist is not only brilliantly done but each hour feels like it’s own little cinematic masterpiece. Ben Daniels deserves an Emmy nomination for his performance as Marcus and the entirety of the cast, kids included, match Ben’s brilliant performances instead of falling into the shadows of them. You won’t find a more talented and diverse cast out there on any other television show. Friends don’t let friends miss out on great TV, so make sure you invite family and friends to watch with you on Friday nights. 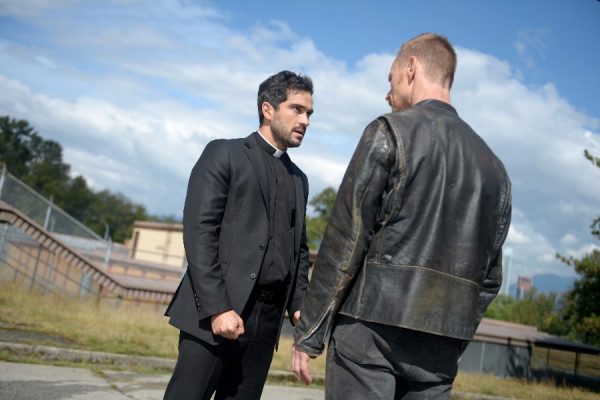 After realizing that the persona of Grace was no longer deep enough to keep Andy’s mind, the demon decides to switch things up a bit and instead appears as Andy’s late wife, Nicole. Though not quite as terrifying as Grace, Demon-Nikki is way more dangerous to the family than Grace was. Andy deep down knows that this isn’t real, he even questions is, but his grief is too strong and the demon is wedging itself into that empty spot in Andy’s soul. With the demon’s history and blood lust for destroying families, I think we all know just how bad this can get. Nothing is off the table now, and I think it’ll get a hell of a lot worse before it gets better.

Marcus meets up with Father Tomas again and they share both information and concern for the safety of that household. But they can’t just act without the necessary proof of possession, and the household is in a delicate state to begin with. Tomas is still having visions, by allowing any demon to enter his head just once was a risky thing to do. Though the visions seem to be helpful in this moment, it’s hard to know what Tomas should or shouldn’t trust.

Truck has been moved to a secured facility for a psychological assessment, which is absolutely heartbreaking. He wants to come home and for Andy to tell Verity that he didn’t want to hurt her. He mentions that the voice in his head made him do it, and as sad as it is to see Truck stuck there, he’s safer there. Andy has clearly given up on him, and slowly but surely the demon is tearing his family apart. 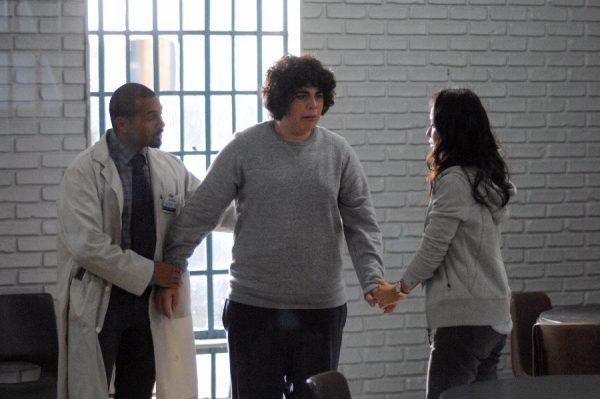 Mouse and Father Bennett come to Chicago and find a cancer-ridden fully integrated Maria Walters. She unfortunately is not much help to their cause and instead tries to get between Bennett and Mouse. Mouse is evidently hiding secrets from Bennett and she knows Marcus somehow. The demons are also having Marcus and Tomas followed by someone, Peter maybe? And Maria makes a comment about how nicely Tomas is coming along… SEE he should have listened to Marcus about letting the demons into his head! It wasn’t the smartest decision and now we might have to deal with a possessed Andy AND a possessed Tomas! I’m not sure that Marcus will be able to handle that, even with Bennett and Mouse’s help. The entity on the island alone is clearly a very powerful demon that’s been lurking and causing mayhem for centuries, our demon fighting duo has enough on their plates with that alone. Before we find out Mouse’s secret, she unfortunately shoots Maria in the head and the demon disperses. So I guess we’ll just have to be in the dark about that particular secret for a little bit longer. 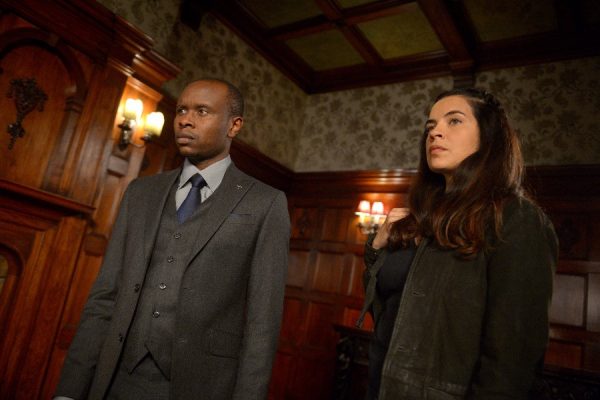 But only Andy has any clues what’s actually going on in his head, and he’s not talking — to anyone other than Nicole. Who creepily has reminded him many times that she isn’t going anywhere. Great, stuck with the demon for life now. He asks Demon-Nicole if she made Truck hurt Verity, and of course she denies it. But he keeps opening up to her, talking about how he let everyone down after she died, allowing that terrible dark grief spot in his soul be filled with Demon-Nicole even further. Marcus and Tomas show up at house and tell Rose that they believe the demon coerces parents into killing their own children, and that it’s set its sights on Andy. They want her to help them in keeping an eye on him, but Demon-Nicole knows what’s up and as soon as they encounter Andy, she tells him that Rose is now working against him.

Which puts us as the world’s most awkward family dinner. Rose invites Tomas and Marcus to stay for one last meal before leaving, but Harper spills the beans and reveals that the two are actually exorcists and not just regular priests. This puts Demon-Nicole and Andy even more on edge, with her continually prompting him that they cannot be trusted. He begins attacking their line of work and pulls Verity’s history into the conversation. Though he uses the excuse of just being over-protective, we all can see the change in Andy’s overall demeanor. What follows is the best scene in all of season 2, Marcus and Tomas trying to provoke the demon over after-dinner tea. From this point forward the episode just snowballs into one big epic ending, but this one scene building it all up is amazingly done. It begins with some relatively inane questioning as to how Andy and Nicole decided to become foster parents, and then Marcus asks him about Truck, grief counseling after Nicole’s death, and just continues to push his buttons. Marcus is very clearly trying to get a rise out of him here and that’s what Ben Daniels is a master at. 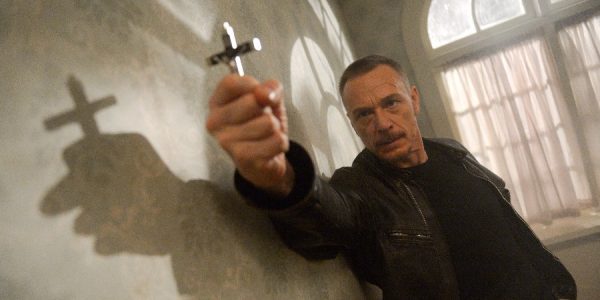 Rose tries to apologize to Andy for allowing the priests to have a look at him, but all it does is reiterates her belief that his behavior is not normal. He tells her it’s because of all the problems in the family, but admits that he didn’t deal with his grief after Nicole died. He thought he could push the pain aside, but we now know all that did was leave a big gaping wound for pure evil to bury itself in. So that’s exactly what evil did. In a rather quick turn of events Rose and Andy are now making out, but Andy is torn between her and Nicole. The demon decides to have a bit of fun with him and it’s unfortunately at the worst time that Harper’s crazy mom shows up to try and steal her from the house. Luckily, Tomas and Marcus were still keeping an eye on the house from afar (after being kicked out by Andy) and so are there to help stop Harper’s abduction. For Rose, well at least she finally gets the hint that Andy is seeing Nicole and that her intuition was right, something is wrong.  Demon-Nicole wants Andrew to strangle Rose, but his attention is diverted by everyone else screaming about Harper’s crazy mom. In a blink and you’ll miss it moment Andy’s got the knife Harper’s mom was wielding, and we all have to watch as he stabs her to death before the demon officially moves into his body. Are you seeing this Rose, Tomas and Marcus?!?! Y’all need to get this exorcism started, and quickly. 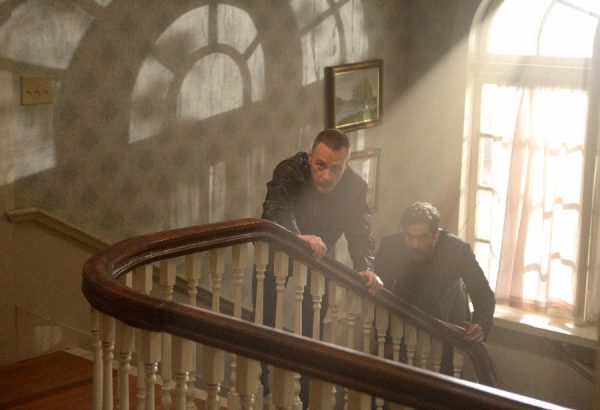 One of my favorite things that The Exorcist has always done, is make the show so character-driven. It’s not just about jump-scares, find the demon, battle the demon, and end the season. There are real characters, real stories and devastating reasons that all contribute to each possession. We care about Andy and the Kim Kids,  we’ve had the first half of the season to learn his story, see his life and experience, and find him to be a guy with a big heart who’s just trying to help others even though he’s in over his head. And because of that history and background and pain, we can also see just how evil is able to sink it’s claws into him and the why behind that is also heartbreaking. The Exorcist: The Next Chapter is more about the story of what’s going on in the head of Andrew Kim. And just like in the first season, the demon is the biggest problem but it’s not the only problem.

This season has been nothing short of brilliant, the pacing, the atmosphere both outside and found in the sets, the scripts, the camera work, the makeup and effects department and the powerful performances. Each and every little thing has so much care and detail put into it that the overall production each week really and truly feels like it should be shown on a big screen in a darkened theater and appreciated as the classic original once was. Well done to everyone involved on this show because it’s easily one of the best shows on television and just watching a single episode makes that clear. With the demon finally being pushed to a breaking point, the season will begin building towards it’s final epic conflict. Buckle up kids, these last 4 episodes are going to be one hell of a ride.

The Exorcist airs Friday nights at 9/8 c on Fox.

Join in on the conversation! Be sure to watch live each week and use the hashtag #TheExorcist on social media.