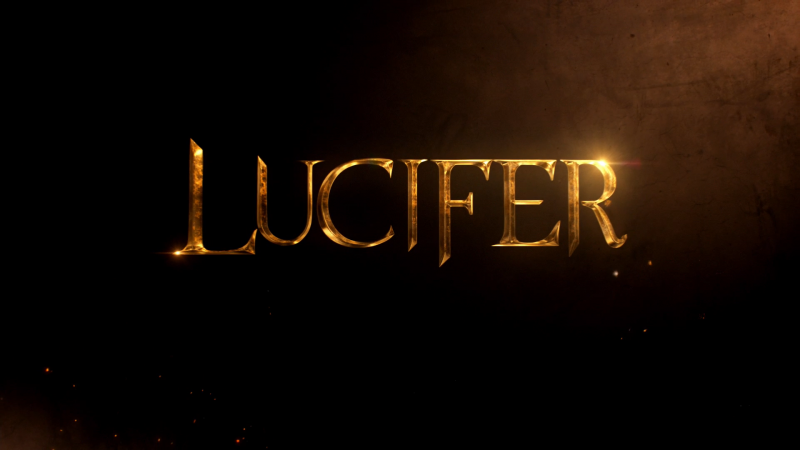 This episode is about Lucifer’s relationship with Chloe, his ex-wife Candy, and Ella. Ella and Lucifer are in Las Vegas searching for Candy who has been reported missing. It’s Chloe’s birthday and she is feeling neglected because Lucifer is gone and not celebrating with her. Lucifer and Chloe sure seem to be pining for each other.

Its Chloe’s birthday and Lucifer bailed on the party. Last time he went AWOL he ended up in Vegas and married right when it seemed that there was something starting between them. Looks like Chloe never quite got over that. Chloe goes to talk to Linda to find out if she has seen Lucifer, they decide to go and have their own party right there in Lucifer’s penthouse wearing his clothes and drinking his booze.

Linda finds a copy of Hamlet there, signed by Shakespeare himself! “Thanks for the punch-up. Love, Will” Lucky it was Linda who saw it and not Chloe who would have a hard time understanding why and how he would have a book signed to him by Shakespeare. 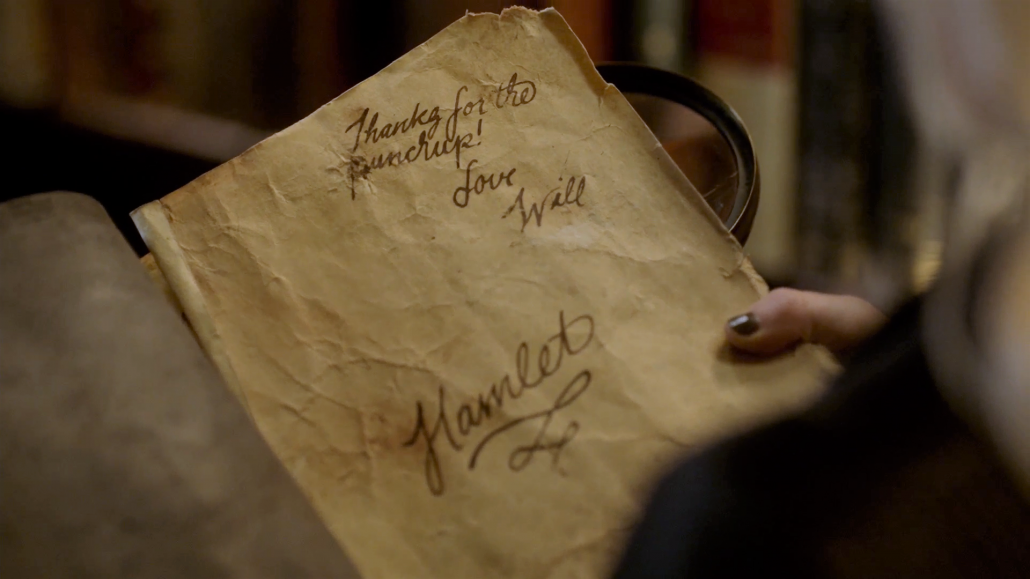 Throughout the entire time, Chloe cannot stop talking about Lucifer. He calls Linda to cancel his appointment and while he is talking to her, he sees Ella coming towards him all dressed up and he tells her she looks ravishing. Chloe hears this and begins obsessing about it. Linda tries to convince her that he said radish. (Thus the title.) He is with someone ravishing on her birthday. She’s talking about her feelings and says she no longer has romantic feelings towards him, but it’s not convincing since this is all she can talk about. 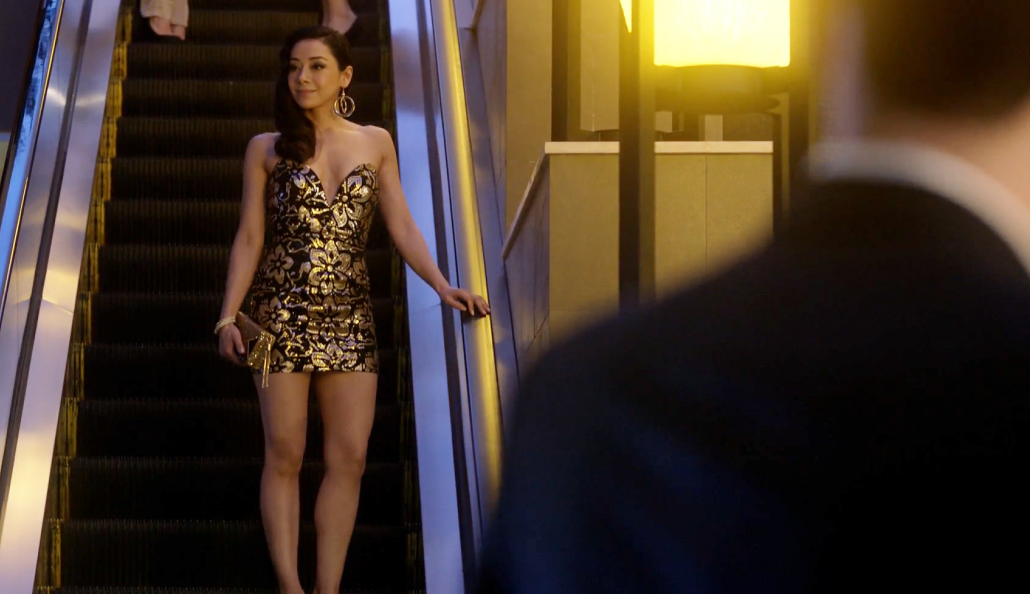 Chloe is not over Lucifer. The question we must ask is whether her feelings are real or manufactured by the way her parents were brought together. I think they could be real.

During this episode, we learn about how Lucifer met and married Candy. It was when he went to Vegas to avoid the building relationship with Chloe. He was convinced that she had been manipulated by his father to be interested in him, and he didn’t want to take advantage of that. Candy had stolen Lucifer’s wallet so he went to find her. He was waiting in her apartment and they bonded over their lies. They sat together and drank wine while eating ice-cream snuggled under a pink snuggie. She tells him that she can tell that he really cares about Chloe and his response is that he cares for her a lot. Lucifer learns that Candy was conning people to get her club out of debt. This is when he came up with the idea that she should marry him so he can avoid Chloe, and in return he will pay off her debt to get rid of the loan shark who is after her. 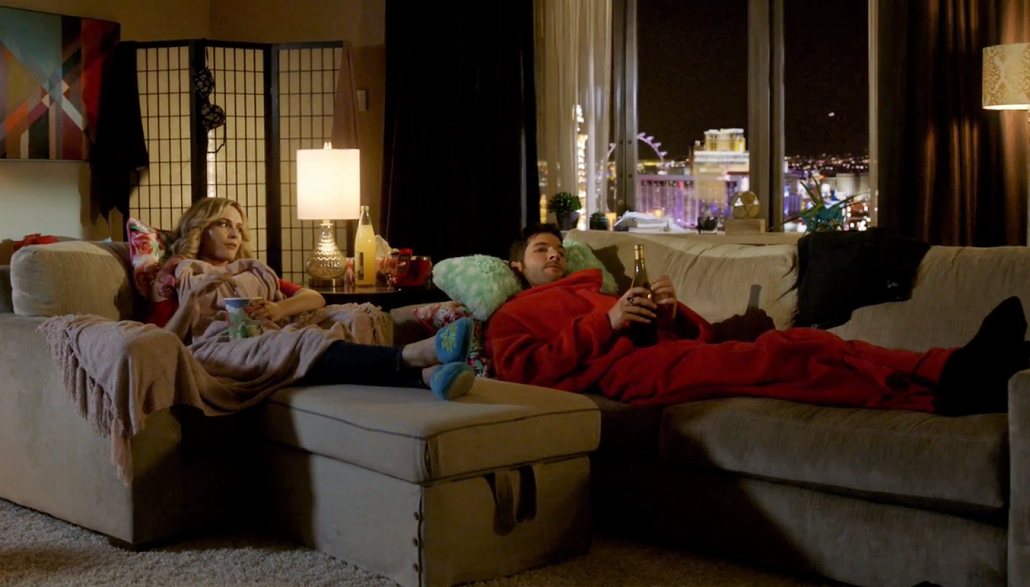 Candy’s problems have not gone away, and there is someone trying to kill her. Lucifer arrives in Vegas with Ella who clearly has some history in Vegas. Her comment as they get out of the car is classic Ella, “smell that, pleather, cigars, and vomit”. Meanwhile, he is avoiding Chloe’s calls and texts.

They find out that a woman was killed who looked like Candy, but wasn’t Candy. They decide to look for the person who would be most likely to want her dead. The loan shark, Louis Pagliani, is also dead. They begin looking for clues and because it’s Ella she immediately does her CSI thing. My question is, where did her purple gloves and other stuff come from? She didn’t have a purse or anything. It’s a minor issue, but it’s hard not to wonder.

They see a hideous portrait of Pagliani and his wife with his crotch shot out, sending quite the message. They think that maybe she thought that Candy was having an affair with him so she shot them both. When they realize this, they use Louis’s phone to call her (Roxy), Ella hears the sound of a Guido’s Rainbow Slot Machine in the background of the call. (Bada-bing! Bada-bing! Bada-bing!) She’s all excited because it’s a vintage machine and only one casino in Vegas has it, the Moonbeam. The stuff Ella knows!

They head to the casino. They see Roxy and she is the pit boss on the Black Jack floor, Lucifer wants to go right up to her to talk. Ella says that they can’t do it that way; they have to catch her attention by winning a lot. She convinces him to go sit at the Black Jack table and she stands next to him advising him. She is getting pretty agitated and finally pushes him out of the way and takes his place. A couple of goons take them into a back room, where Ella’s picture is matched up with an online photo of her. Apparently she is an infamous card counter. I’m not surprised; she clearly has an incredible brain. 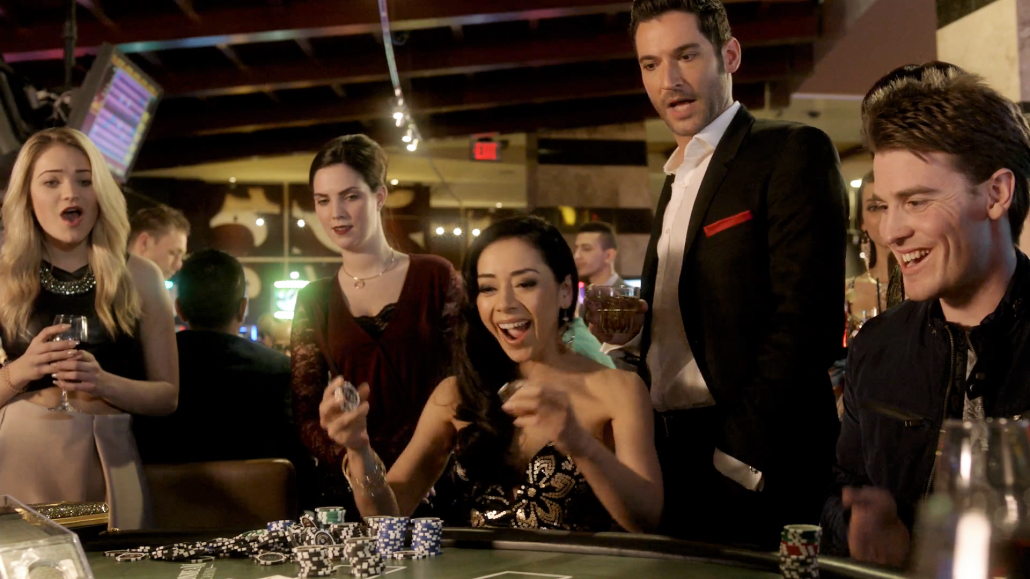 Roxy comes in and they confront her about murdering her husband and the fake Candy. It seems that she did not do it and they are escorted out. When Lucifer says something to her about her card counting, she says, “We all have our coping mechanisms, mine just happens to be counting cards”. When asked what it’s for, she tells him it’s to help quiet the voices. Voices? I think there might be more than meets the eye with her. Is she somehow a divine being without anyone knowing it?

A cocktail waitress approaches them and it turns out to be Candy. They decide to flush out the killer by having Lucifer take over the nightclub. Since he and Candy are still legally married, if she were dead, the club would automatically go to him as her husband. So they go in and prepare for Lucifer to sing at the club. Hilariously, Ella dresses up in a feather headdress and pretends to be one of the show girls on stage with him. Tom Ellis has many fans of his singing and this episode provides all his fans the opportunity to hear him sing an entire song on the stage. He sure puts on a good show! 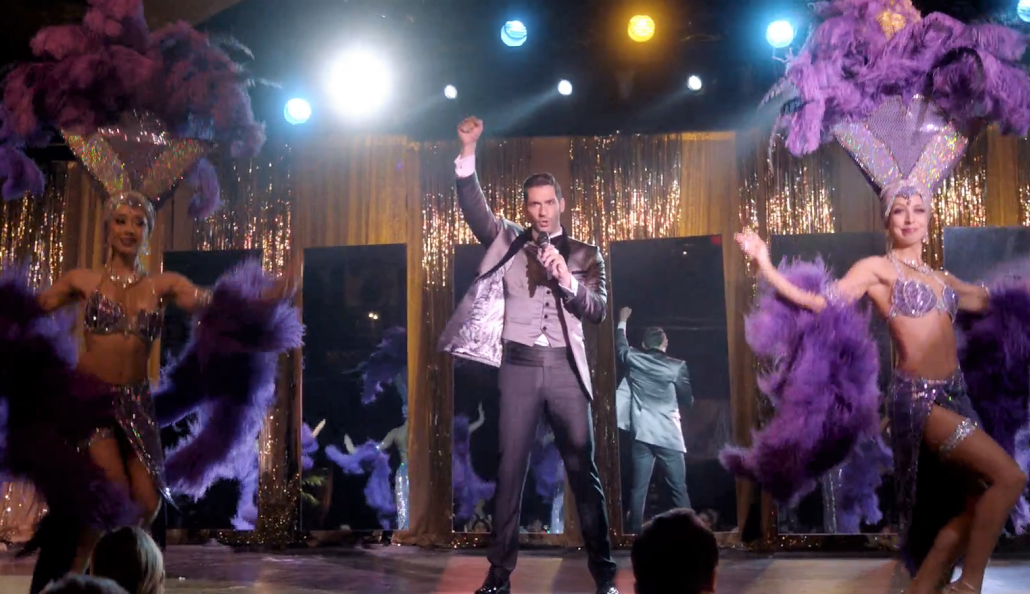 It takes a while, but at the end of the evening, they learn who the killer is, and he is arrested. When Candy asks him if he’s messed it up yet with Chloe, he tells her he fears he is about to. They have a straightforward friendship and I think it’s nice for Lucifer to have that. Ella is a friend on a whole different level, she is someone he can depend upon, but her intelligence and quirkiness add dimension.

He gets home to see Linda passed out on the couch and Chloe passed out on his bed. When he sees this he goes to Chloe and talks to her sleeping form and confesses that he didn’t want to upset her about going to Vegas again. 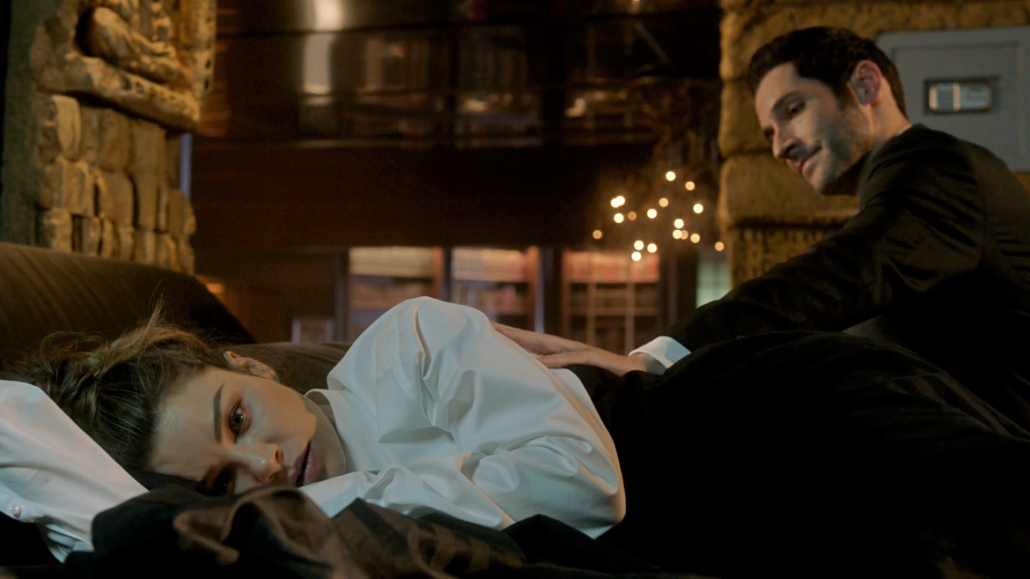 He doesn’t want to lie, especially to her. He has a gift for her birthday. She wakes up and he gives her a box with a necklace in it, the pendant is the bullet that she shot him with during the first season of the show. He tells her, “I thought, since I’d likely never penetrate you, I’d commemorate the one time you penetrated me.” Even though he makes such a silly comment, it ends up being a sweet moment between them with a very nice hug. 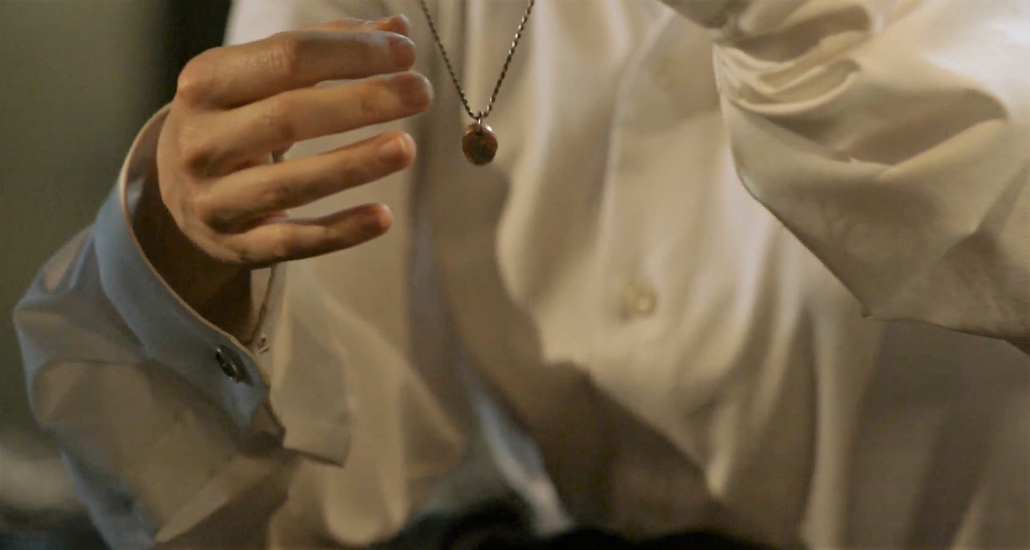 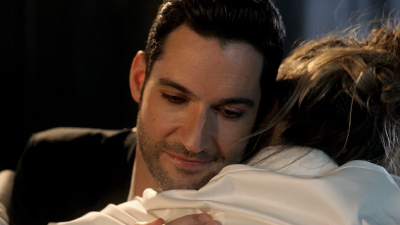 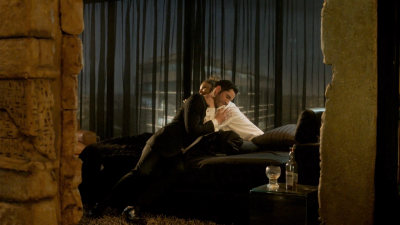 As far as I can see, they are both still hung up on each other and it seems like Lucifer has decided to pursue her. We haven’t seen Pierce in a few episodes, and Chloe was getting pretty close with him, it will be fun to see how this plays out.