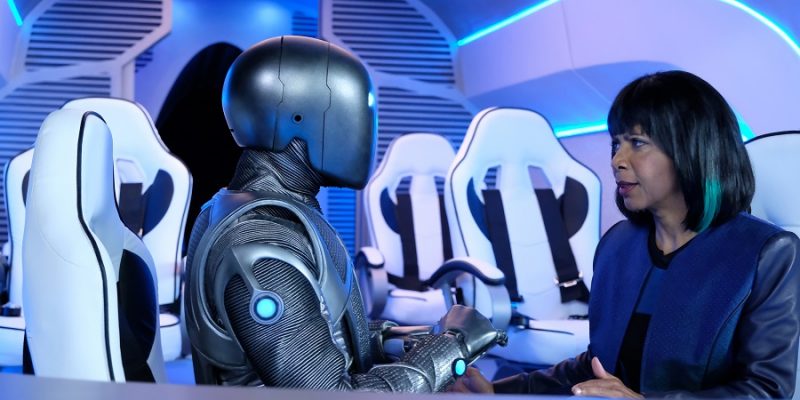 The Orville — Into The Fold — Review

The Orville continues to impress this week, right on the heels of an announcement for a season two renewal. Just proving even more so why that early renewal is so well deserved and wanted by fans. “Into The Fold” is another episode focusing on just a few individual crew members, this time Dr. Claire Finn. This first season has really taken the time to set up these character specific episodes, letting the viewers connect with the crew on a more personal level. As this season builds towards what I’m sure will be a high stakes and epic confrontation, it helps if the viewers know and love the crew that we are all rooting for. Plus, The Orville has this special magic trick, where each week is progressively better than the last.

“Into The Fold” has Dr. Finn taking the spotlight and boy does she shine brightly. Penny Johnson Jerald is a stunningly talented and versatile actor. For me, her performance in “Into the Fold” catapults her to be a stand-out among the rest of the cast.  I love the entire cast and crew, and Dr. Finn isn’t my favorite character, but Penny Johnson Jerald stole the show last night and I think that a lot more fans are going to take notice of her now. We also get to spend more time with Isaac, who experiences some meaningful growth of his own. Though I think the bigger role he plays here is being the comedic relief in such a terrible situation.

Claire is taking her kids, Marcus and Ty, on a mini vacation to an amusement park planet. Hell yes, where can I sign up? This is the future I’ve been waiting for. Her younger son, Ty is very excited to go but Marcus is “too cool” for that with his pre-teen I know everything attitude. Quite frankly, he’s a little bit of a shit. He disrespects his mom, antagonizes his little brother and is the instigator of many arguments. All he cares about is being too cool and playing his video game. They’re already arguing as Claire tries to get them on the shuttle and is slightly disheartened when she learns that Isaac will be accompanying on the journey as pilot.

Not all heroes wear capes though, and in my opinion, Isaac is easily the hero of “Into The Fold.” While Claire might not appreciate his unintentionally patronizing comments about her parenting skills, she’s still a fierce Mama Bear and goes into “Mom Mode” pretty quickly. I can see now why so many of The Orville crew follow her instructions pretty immediately. We learn that she’s never been married and her kids aren’t from a partnership, she wanted kids but never found the right person to share that experience with, and so Dr. Finn took the single mom route. Isaac does touch on some valid points though when it comes to their initial behavior. They’re running around the shuttle, not strapped in, and fighting when the ship begins getting pulled off course. Then, Ty throws Marcus’s video game at the dashboard while Isaac is trying to get them out of there, making things much worse. They get pulled into a tear in space and end up flung out the other side, in a damaged shuttle and WAY off course. They’re able to crash land on a nearby moon but the crash is pretty rough. It’s actually a very tense scene with how it is shot and the camera angles, effects used. I think it’s the most raw scene we’ve gotten out of The Orville thus far. The shuttle breaks in half separating Claire from Isaac and her boys. We see her unconscious body being drug away by a local, but things aren’t looking good for her, Isaac, or the boys right about now. 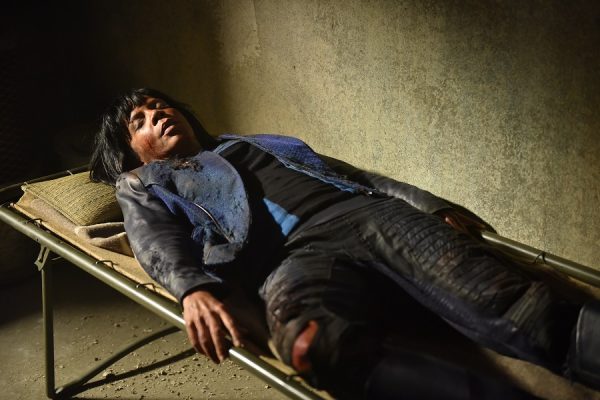 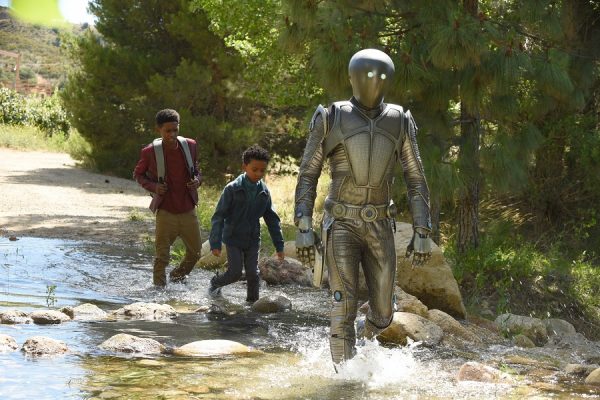 So Uncle Isaac get stuck with the kids, which is completely adorable and a learning experience for all. “Into The Fold” does a fantastic job with the naturalistic flow of the script. Coming off last week, which was more jagged and slap-stick with the humor, things unfold and emotion progresses with a realistic feel in this episode. Isaac can be unintentionally a bit cruel to the kids, without meaning to be, which makes it both a little sad and quite funny.

Their first night away from mom and with Uncle Isaac proves to be quite eventful. They take a hike, run into crazy locals that want to eat them, and get the worst bedtime story ever. How I can get Issac to come read me bedtime stories? Because I would pay good money for that. Before going super creepy robot on us and reading the Tale of Peter Rabbit in Claire’s voice, Issac gives them a bedtime story that acts more like a recap of the days adventure. In this time away from Claire, and after Isaac points out how poorly they listen and sometimes behave, the boys get a lesson in respect and family from the narcissistic robot. He takes a firm hand with them and whips them back into little gentleman in almost no time at all.

The two children were left in the care of a superior life-form while their mother was either missing or dead. – Isaac 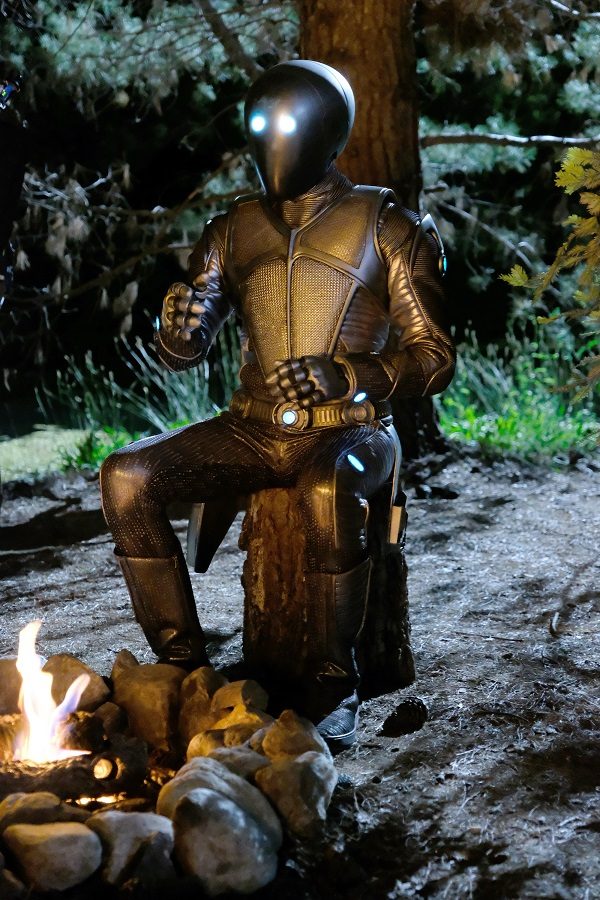 Claire wakes up and find herself prisoner to a local inhabitant of the moon who is also quite the survivalist. He informs her that the entire population have all been affected by a terminal disease, and resorted to eating each other. Yup, you heard me right, Moon Zombies. She’s lucky in being found by someone who doesn’t just want to outright eat her. But he’s also alone on this moon, not affected by the virus that took everyone else he knows, and he’s lonely. So she’s really not in that much better shape than Issac and the boys. 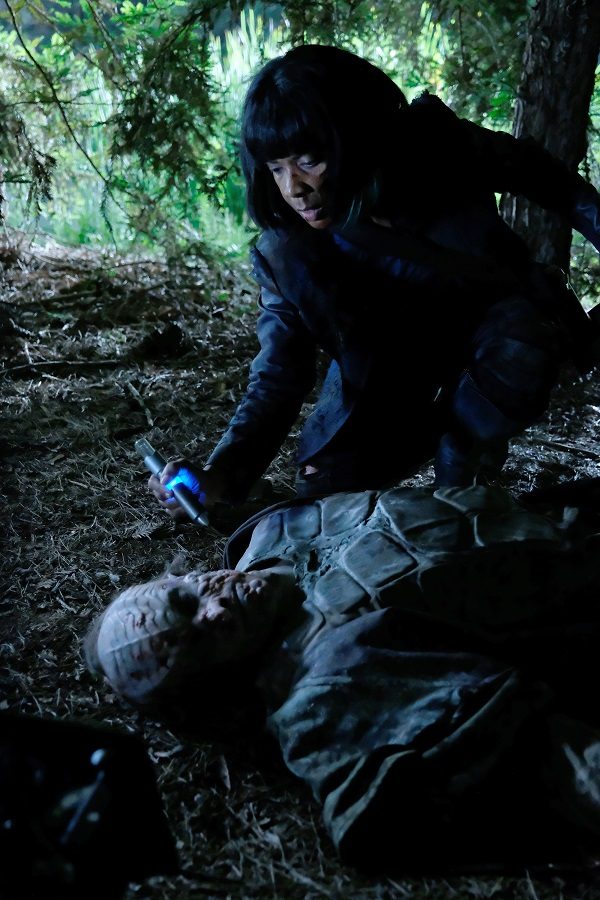 In another super tense scene, Claire comes up with a way to escape. It includes cutting herself with a very questionably infected piece of metal, and shanking the guy holding her captive. Mama Bear, she will do anything to get back to her kids. After finding the communication device homeboy took off of her, Claire is able to connect with Isaac and her kids. They make a plan to meet back at the shuttle. Isaac has horrible news, Ty has become ill with the disease after falling into a stream the day before. Cue all the tears and emotion to come bursting forth, and where Penny Jerald Johnson gets even better, if that is possible. She meets a couple of hungry locals on her way back to the others but is smart enough to stop for a blood sample, good ol medical mind.

After a short and fairly depressing family reunion, Claire makes everyone watching want to hug their own mothers. She’s trying not to flip out at this hopeless situation. Nobody knows where they are, her son is sick and there isn’t anything she can do. The shuttle is damaged beyond repair. But she is fiercely loyal and protective and will not back down when it comes to her family. In a touching moment, while she is trying her damnest not to break down, Isaac silently reaches out and takes her hand into his, something that he learned from Ty the day before. And cue the water works. Seriously, every week this show is better and better and I am completely fascinated about where we’re heading for the rest of season one and the horizon of possibility that season two will have in store.

Of course, there isn’t much time for collective “awwws” when there is a Moon Zombie cannibal horde coming after you. Marcus gets to finally test his gaming skills in real life, because Claire trusts him with a blaster to assist Issac on saving their butts. She gives him the best mom advice ever, “Wide stance and keep it on stun. They may not value human life, but we do.”

The Orville arrives just in the nick of time. After learning that their shuttle never arrives, Ed leaves no crew member behind and begins a rescue mission. They don’t have a whole lot to go off of, but with the amazing crew it doesn’t surprise me that things work out in the end. Because Clare had taken blood from one of the diseased inhabitants she is able to work out a cure for Ty. If the Union gives approval she might even be able to restore the lives of the unfortunate souls on the moon below. The episode ends with Claire thanking Issac, who continues on with his unintentional smart Alec comments. He admits to growing fond of her boys, just as they grew fond of him.

Outside of the basics, “Into The Fold” is one hell of a script, and features some fantastic camera work. The overly tense crash scene with Claire ripped apart from her boys is paired so perfectly with the soundtrack that accompanies the episode. And can we take a moment to appreciate the opening credits sequence and soundtrack please? Because I still get chills every week when it starts up and not enough of us are talking about how epic that opening is! You can tell that this is a labor of love for everyone involved. The care that this team puts into the smallest details is part of why the fan base is so huge. Every episode deals with completely un-relatable topics sprinkled with overly relatable topics. The acting has never been sub-par, and each character has really been given a chance to develop into a lovable crew mate.  It’s not at all surprising that The Orville has already been renewed for a second season and is currently Fox’s most watched original premiere. The Orville has found it’s niche, and fans from all around are watching because it’s the type of show that we all wanted but was missing from the lineup.

Want to be part of the crew? Then join in on the conversation! Be sure to watch live each week and use the hashtag #TheOrville on social media.