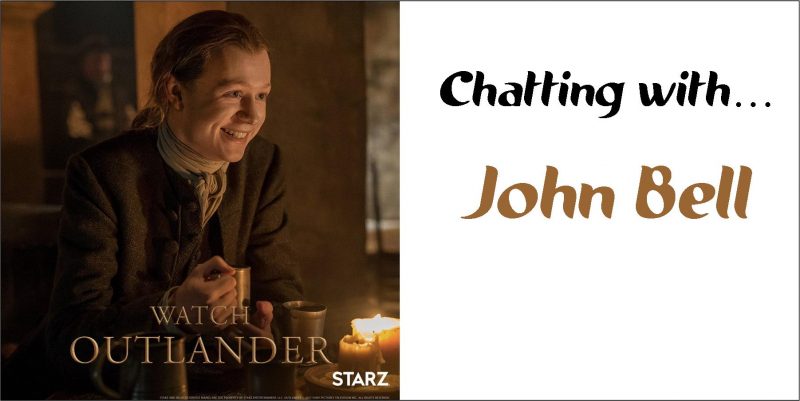 I had a great opportunity to speak with John Bell, the terrific young actor who joined the cast as Young Ian in Outlander recently. We chatted about stunts, dogs, and meeting the fans. John made his acting debut at age 8, after winning a contest for a part in an episode of Doctor Who. Since then, John has appeared in The Hobbit trilogy, Wrath of the Titans, and now, Outlander.

TIBS: Welcome to the clan and  happy birthday a couple of days late!

I’ve been watching some of the older interviews, and it’s exciting that you were in two of my favorite series, The Hobbit and Doctor Who, and now in Outlander. Looks like you’re a Harry Potter fan as well!

I am a Harry Potter fan! I was thinking the other day that I need a part in a new Harry Potter film! But if I’ve got Doctor Who, The Hobbit, Outlander and Harry Potter, I’m stocked up for ComicCon for life!

Have you done a ComicCon?

Yeah, I’ve done Hobbit Con in Germany, and a few in the UK. So I’ve been interacting with fans for quite a while. Like Outlander, Hobbit fans are very passionate about their film. So it’s all been great training for the craziness that comes with Outlander seasons 3 and 4.

I’m glad you’ve had an intro and can jump right into our people, because we’re nuts,

And that’s a good thing!

Well, maybe. Did you have a chance to meet Graham McTavish, who’s one of our other Outlander alumni?

Yes, absolutely. The first dwarf my character meets is Graham. He sticks his head through a toilet. 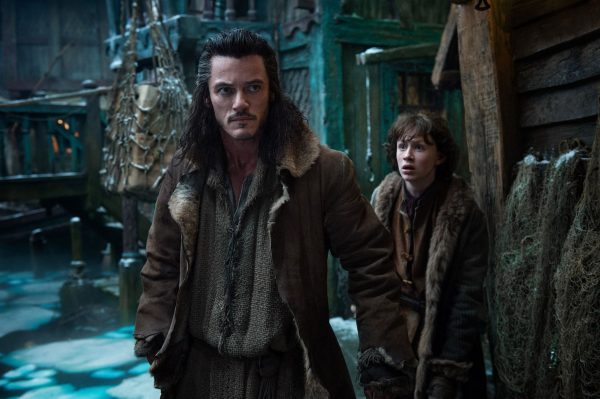 I remember that, that was funny. You won’t be acting with him, though, too bad. He does pop around sometimes though. Young Ian is an interesting character. He’s one of our fan favorites, not that we have any who aren’t, but he’s definitely a favorite. Do you have any handle on what happens to him after season 4? Have you read ahead in the books or heard rumors?

I’m reading the books by season. But my grandmother, she has read all the books, the minute she found out I got the part. So she’s been letting me know little tidbits of information. And what I’ve heard is absolutely amazing. I’m kind of in awe of what I’m going to get to do. Especially when it comes to his moving on to America, and everything that happens to him there, and how much he changes. I mean, he goes from this this young, naive, kind of cheeky chappie to a real warrior and hunter. So I just can’t wait to do that whole arc and story in development. It’s going to be amazing. I can’t wait.

You had said a while ago that you were interested in doing more stunts. Do you think you’ll have that opportunity? Are you looking forward to that in Outlander?

Funnily enough, today was all about stunts, so yes! I’m just off the set from doing a creepy night sequence. There will be plenty of that coming up. I’ll be bruised by the end of it, hopefully not too severely.

Ian is also a very adventurous character. Jamie describes him as a person that things just happen to. Do you have anything in common with that?

Oh, yeah, I think we can both be a magnet for trouble. Especially when I’m out in Glasgow, that’s for sure. Me and Ian, there are a lot of similarities, I think.  Ian has kind of a wide-eyed view of the world, which I pride myself in doing too. I never like to let anybody down, and I don’t think Ian does that either.

You  had some interesting scenes in our first introduction to you.

<Laughs> – yeah, that episode was chock a block with Young Ian mishaps and highs and lows. The scene that I was most nervous for was the scene with the barmaid, and his first time and all of that. But I can let you in on a wee secret – neither me or Zoe Barker, who played Brighid, had ever done anything like that before. So we had taken some whisky with us on to set, and just before they called action, we went “slurp, slurp” and that just made it all so much easier. We were all loosey goosey together, and it was funny, because having to do that scene, I kinda understood how close Sam and Cait are on set. Because when you do that with people, you get to know them really well in a short space of time. So me and Zoe, by the end of it, were close pals, having done that together, having been “TV virgins.” 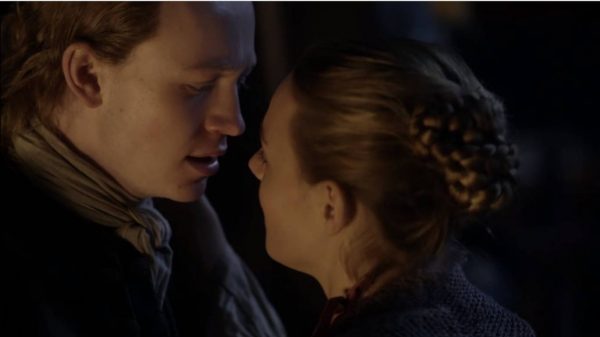 It was a very interesting scene, not one I was expecting, because that’s not the way it’s written in the book, so it looked like you were having fun up until the point where the bad things happened.

Yeah, it was a shock all the things that happen after it, and it doesn’t go too well for Young Ian.

With the fire and everything, Sam has mentioned that there was live flame on set. Did you have to deal with that?

Everything you see in that sequence was me. There wasn’t a stuntperson doing that, I was the one getting thrown about, I was the one throwing acid, I was the one stamping on the fire, as the whole thing came down around me. That was so much fun to do, because I love my stunt work, I love doing stuff like that. And the team here in Scotland are fantastic, and very safe. And as close as the flames come to you, we were all very safe, don’t worry. Dinna fash, as the Outlanders say. 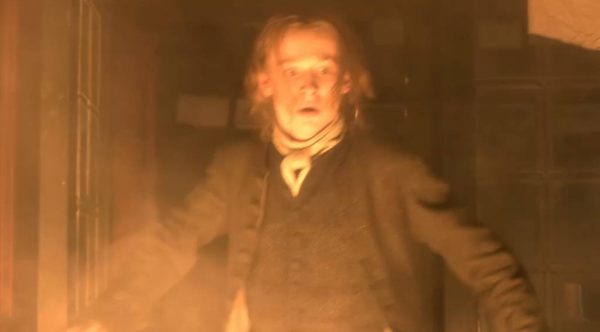 That was very exciting! And then in 308, you have to go back to Lallybroch and take your punishment. But 308 is also the next turning point for the series, where Ian gets captured. We don’t know anything about – I mean we know you were filming in South Africa for the rest of it, but your story line gets very dramatic. What was it like filming in South Africa? What did you have to go through?

It’s hard to talk about it, because I don’t want to give too much away, but I can let you know, I guess, that somebody has plans for me. And not just being captured because of bad luck on his part. Somebody has some pretty brutal plans ahead, it ain’t looking pretty for Young Ian, it really isn’t. But I think what’s really going to happen is that he’s going to have to learn how to survive on his own. Before, with all the trouble that’s happened, Jamie’s come in and saved him. He’s always had Jamie there. He’s now been wrenched away from everything he knows, and it’s down to himself to survive and make sure he sees his family again. So I think you’re going to see a whole new side of Ian when it comes to him taking charge, and being a bit more fiery. Because he’s like, “fuck it, I’ve got nothing else to lose.” 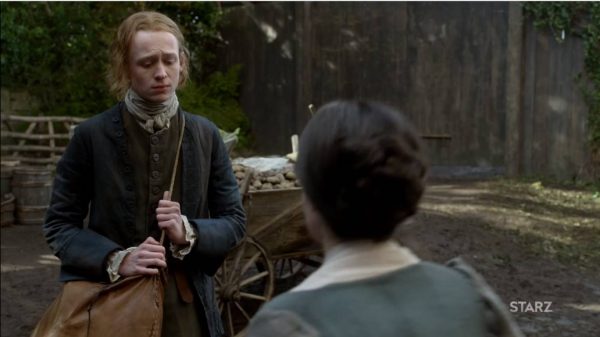 I’m looking forward to seeing all of that! Now you’re filming S4, and you’re in America. Rollo is your pet. How are you enjoying working with the dog? Are you a dog lover?

I love dogs. That was never the issue. But he’s a bit of a diva. I’ll give you that. Some days you’ll be doing the best take and he’ll just walk off. And  you’re like, alright, OK, good to know. But I did a lot of training with him. So we went to puppy training together,  we have a very good strong bond, and we look out for each other on set. Me and the dog who plays Rollo. Yeah, it’s been great. 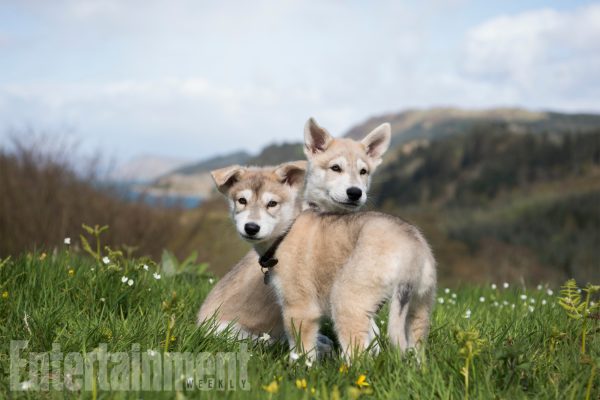 You came into a cast with a lot of new cast members. Cesar Domboy is new, Lesley and Hayes are new, Mr Willoughby is new, but Sam and Cait have been together. Has it been kind of the new guys against the old guys, or do you think everybody is meshing well?

Oh no, we’re a family, we’re a team now when we’re working together. When I first came on set, it was me, Cesar and Lauren (Lyle, who plays Marsali), it was us three, we were the sort of newbies, the new young team, and immediately, we were welcomed with open arms. I immediately got on with Sam and Cait, so we were never made to feel like, “oh we got to try and prove ourselves,” because they wanted us there as much as we wanted to be there.  And Sam and Cait have been absolute joys to work with. Caitriona is one of the nicest people I’ve ever met, and Sam is just, I’ve said it before, but I’ll use this, like a lovable puppy on stage, keeps everybody going. So I’ve really had a lucky time being there, and I’m happy to be a part of this television show. 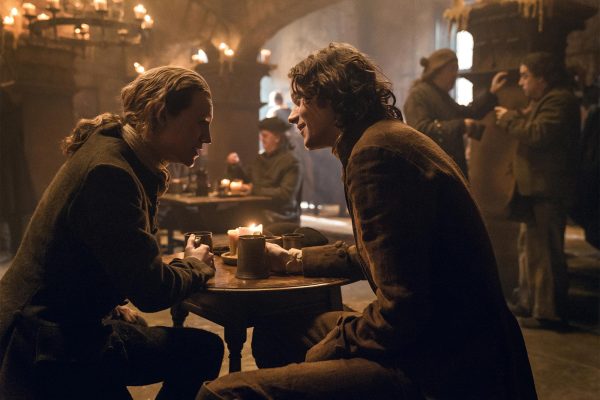 I really enjoyed seeing you, and I’m forward to the rest of the season, but in seasons going forward, it covers a large span of years. Right now, you’re just a couple of years older than your character, but right now you’re filming season 4, and the books right now would be through season 8, but Ian ages along with that quite a bit. Are you up for what they’ll have to do to make you quite a bit older?

If they still want me, I’m up for anything. I’ll shave my head, I’ll do whatever. <laughs> Anything, as long as it’s not permanent.

What other kinds of roles would you like to do? You had mentioned in one interview that you’d like to direct.

Right  now, it’s hard to think, because Outlander has become my whole life, you know? Because I’m working every day on set for season 4. But in the future, I just love getting scripts handed to me for auditions and stuff, and seeing myself in these roles. I never think too far ahead as such, because you can never expect what’s coming, you’ve just got to go with the flow. But if I could choose any roles to do, if I were that lucky, I’d quite love to play some mean and nasty characters. Because I have so much fun playing Young Ian, and he has such a good heart, but I’d like to find somebody who has more of an evil streak in them.

The evil characters tend to be very complex, which would be fun.

So now we need to campaign to get you in a Fantastic Beasts movie or another Harry Potter movie?

Yeah, definitely, talk me up.

We will do that. Do you have any plans to do any fan conventions? Is there somewhere we’ll be able to see you?

If I’m not filming, I know there’s a couple coming up. MagicCon is coming up in Germany, there are some others (we’ll bring you news when we have it!).