Outlander Writers Give Us a Guide to Uncharted: Twitter Q&A

Q There were a lot more comedic moments in this episode than usual. Was this the intention when writing the script or are the actors responsible for this?
A It was our intention to find moments of levity throughout the story. It’s nice to have some humor to balance out the heavier/more dramatic moments.

Q Why does Father Fogden keep the jar of beetles? It seemed to me that the father was making some kind of sacrifice ritual, using those beetles from the Abandawe sacred cave to devour Arabella. I also couldn’t understand what those beetles represent for the father.
A Father Fogden gives the beetle treatment to all of his beloved goats who perish. The goat skulls above Claire’s head where she bathed are where we saw the skulls of Father Fogden’s goats. 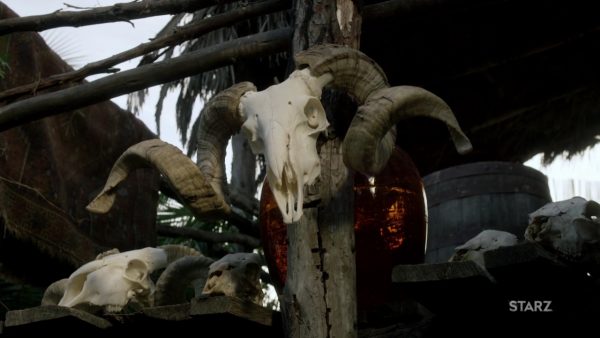 Q Who thought up the line between Hayes and Lesley about MacDubh’s wife turning up in the most unusual places? Cracked me up!
A Karen. Thanks for being amused. Made her laugh as well. It was in an earlier draft and added the couplet back the day we were shooting the scene.

Q How  many takes did it take Scar to shoot his scene?
A Scar was a stone-cold pro. Shot him out in one take. (Scar is the snake.) 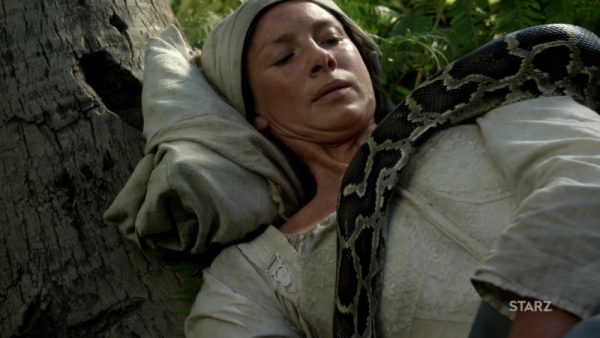 Q Wow the wave that tipped and drowned Claire. How did you shoot that scene?
A With our Frog Squad – great group of underwater camera operators and Malin – our fearless “Claire” stunt double.

Q Why didn’t Jamie want to stick Claire with the needle?
A It’s one thing to stab bad dudes. It isn’t as easy to stab the love of your life with a sharp needle, even if she did stab you first.

Q Writers talk about moving the story forward and the need to compress details of the story because there is so much to cover.Why did you choose to show Claire wandering around the jungle for 15-16 minutes? I got the message in 5.
A One of the joys of adapting this book is having the freedom and opportunity to expand on certain sections. We loved the idea of spending time with Claire as she had to put her survival skills to good use. 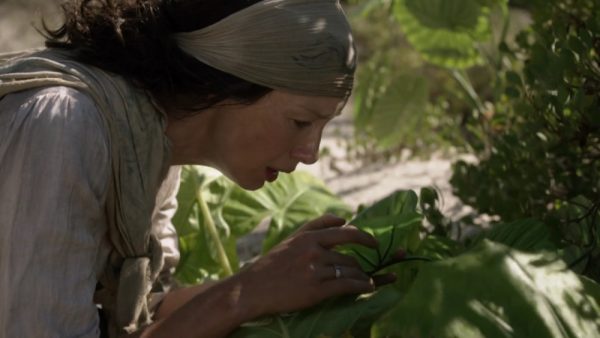 Q Who wrote what scenes, Karen and Shannon? May I guess Karen, first half, Shannon, second half?
A In outline, Shannon wrote the first half, while Karen wrote the second half. Then they switched it in writing of the script. But ultimately, we swapped the script back and forth so many times, it becomes a blend of both our voices.

Q Before you start filming a season, are all of the episodes already broken down into which storylines/events you are wanting to include for that season, or do the designated writers of an episode decide what to include/exclude?
A We usually have about half the episodes broken before we start filming – with the other half loosely mapped out as far as what sections of the book they are to cover. It’s a team sport, so we work together to break each episode before a writer is sent off to write.

Q Why did Jamie give Fergus the name Claudel? Does it have any special significance?
A Claudel was Fergus’s given name at the brothel in France when Jamie first met him. (note: watch episode 203.) 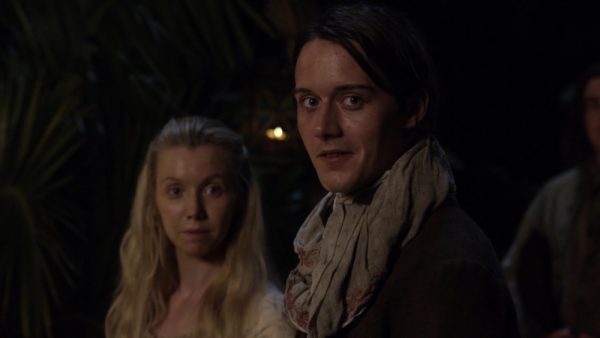 Q The ants! Were they real?
A Real ants cast as fire ants.

Q Did someone come up with Mr. Coco’s “hairstyle”? #buzzcut
A Coco was “cast” from a box of 10 coconuts … and chosen for his magnificent natural flat-top! 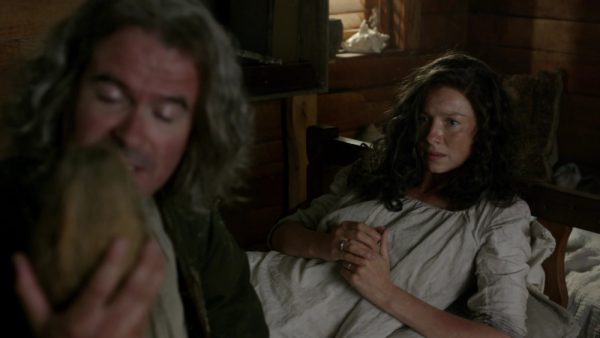 Q Is it easier or more difficult to write episodes following the books?
A In some ways it is easier as there are tentpoles to grasp on to, but in other ways it’s more challenging because you want to fit it all in, but just can’t.

Q This is not a question, but a comment: THANK YOU for Ep. 311 – that was amazing, mamacita! (We say that sometimes in Spanish to emphasize good stuff.) You’re killing it with S3.
A Muchas gracias, estamos muy contentos que te gusto! Viva tortugas!

Q How did Jamie end up on that beach… what happened to the Artemis?
A The ship ran into uncharted shoals in the ocean. These are submerged ridges which jarred the ship and cracked the foremast. 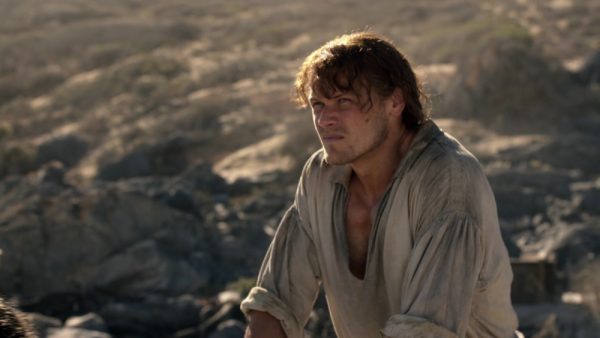 Q Did Caitriona actually start the fire with her flint?
A The quartz was rigged with a real flint, so Cait made actual sparks, and bum roll filling was naturally flammable.

Q If a fan were to visit a set, what would they most likely be surprised by?
A The number of dedicated people working hard to make this show great.

Q Just curious why you chose Claire’s injury via a branch rather than a pirate’s sword? Time/story constraints? It still worked either way for the antibiotic shot and turtle soup to be served.
A We would have loved to shoot a Claire vs. pirate showdown, but your supposition is correct, we had time/story constraints.

Q Looooved the super emotional reunion on the beach! Where in South Africa was this filmed? And how  many takes were there to get Claire and Jamie’s hug/kiss just right?
A We shot that scene on Silverstroom Beach in Cape Town. I believe the take we ultimately used in the cut was 4. Great work by our camera department and cast! 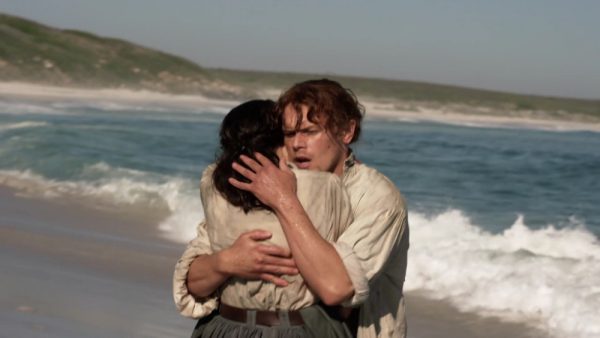 Q How was the snake chosen?
A We had two amazing choices – one gorgeous albino boa python and Scar. Since Scar had a maore natural/jungle vibe, we went with him.

Q Toni, your writing style always produced some of my most memorable episodes. Have you put away your writers’ quill?
A Never! 🙂 Wrote the S3 finale with the amazing Matt Roberts, and am writing one for S4 as we speak! Better get back to it! 😉

Q How did Captain Raines and some of the crew die? Did I miss the scene?
A When the ship hit the uncharted shoals. RIP.

Q I don’t think any fans question the passion, dedication and hard work everyone, cast, crew and production, puts forth for this show. Maybe some decisions but not how hard you all work! It is appreciated!
A Thank you very much! We appreciate you all as well!! 🙂

Coco says it’s time to get back to work! We’ve enjoyed your questions, thank you so much. Until next week… Join us for episode 312, The Bakra, written by Luke Schelhaas!

This week’s Inside Outlander:

Scar the snake > @SamHeughan? Get a closer look into the making of this week’s #Outlander. pic.twitter.com/7oixJ8i8WT

Thank you to Outlander-Online.com for allowing me to use their screencaps!

My review of Episode 311, Uncharted