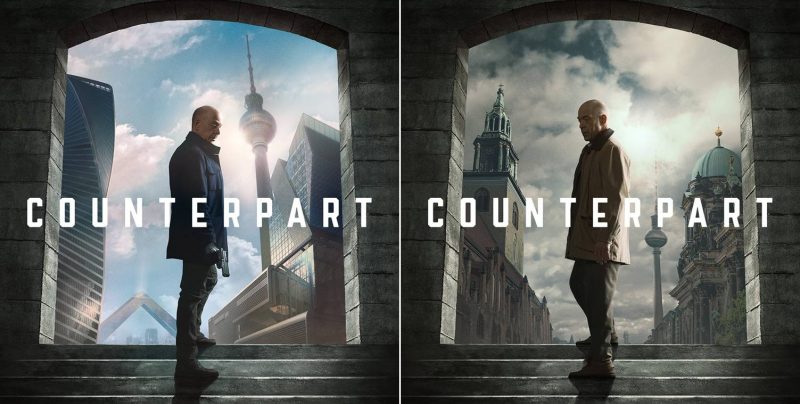 Counterpart to Debut on Starz – Think Your Job is Weird?

Are you in between weird and quirky shows? Looking for something to fill the Stranger Things void? Starz has a new show for you – Counterpart, starting this Sunday, January 21. Part Continuum, part Berlin Station, the JK Simmons-led sci fi mystery thriller will have you scratching your head, and glad there’s more to your job – and less to your company – than there is to Howard Silk’s.

All employees have a low level security clearance. They are not read in as to the nature of the Crossing. #Counterpart pic.twitter.com/aSrMWXr22S

Howard (Simmons) is a “lowly cog in the bureaucratic machinery of a Berlin-based United Nations spy agency.” He’s a nice guy, plays Go in the park with a younger man, has a wife, Emily (Olivia Williams) in a coma from a hit and run accident. Lowly doesn’t even begin to cover it, though – Howard has no idea what he does, why he does it, or what his agency accomplishes. Every morning, he enters a highly guarded facility, the Office of Interchange, heads to the Interface department, changes into the same gray business suit that the other men in his department wear, puts aside his personal phone, his watch, his briefcase, and picks up a sealed case from a guard. Then he enters a small booth, waits for someone to sit down at the desk across from him, separated by glass, and they recite a “conversation” that makes absolutely no sense. And then they leave.

Until the day he attempts to apply for a job in Strategy. Little does he know, he’s needed for something more important – he’s pulled into learning just enough about the Bureau of Interchange to learn that, whatever he thought he didn’t know about what he did, there’s way more there than he could have imagined. A killer has “crossed over,” and the only person who can stop the danger is Howard’s counterpart – Howard, but from the other dimension, same but very, very different.  “When Howard discovers that his organization safeguards the secret of a crossing into a parallel dimension, he is thrust into a shadow world of intrigue, danger, and double cross… where the only man he can trust is his near-identical counterpart from this parallel world. The show explores themes of identity, fate and lost love, posing the eternal question, ‘what if our lives could have been different?’ ”

From the first episode (available to watch early on starz.com), you’ll be able to tell that this is a freaky little show – not American Horror Story-style freaky, more like Inception-freaky. What don’t we know? Are we happy not knowing that there are things we don’t know? Should we know? What if you found out, whether you wanted to know or not? The show has a bleak palette – grays, blacks and whites dominate, with the only splashes of color coming from the flowers Howard brings to his comatose wife every night. The opening is cool and stylish, and one that you’ll probably watch for a few episodes rather than fast-forwarding through it.

Creator and executive producer Justin Marks explains the concept of the ‘counterpart,’ “A counterpart is another version of yourself, someone who has lived a very different life, for a long period of time. Maybe you began as the same person, you were both born on the same day and you both had the same genetic material, but slowly over time you began to peel off from each other, because every day experiences and events begin to nurture you in different directions. So, over the course of several years and then decades, your counterpart will evolve into an entirely different person. You may have the same memories, but you have interpreted those memories in different ways and you’ve used those memories to shape yourself in a different direction. So a counterpart is an alternate shadow of yourself.”

However, the writers “worked very hard throughout ‘Counterpart’ to ground the narrative in the espionage genre, to make sure that at all times what we were really telling is the story of the spy thriller, we’re just charging that spy thriller with more metaphysical aspects that layer on top of it, so that if you had a double agent or someone who’s living another version of a life, it’s a double-agent who has stolen the life of their counterpart. So it’s a spy turn but done our way, taking a traditional trope or a cliché of a genre and turning it inside out by injecting it with another genre – in this case, the existential metaphysical character thriller,” says Marks. The classic espionage thriller concept of a double agent is given additional depth with the
Jungian idea of the shadow self, and the wall between worlds which was physically experienced in Berlin during the Cold War is metaphysically represented in “Counterpart” by the crossing between “our side” and the “other,” but the story remains anchored in tradition.

The show has put out a suitably baffling digital “game” of sorts. This is your “application” to the Office of Interchange – and you’re going to be frustrated and baffled. Just go with it – keep trying, and maybe you’ll figure it out. Try it here!  See if you’re suited for a job here – let me know what you think!