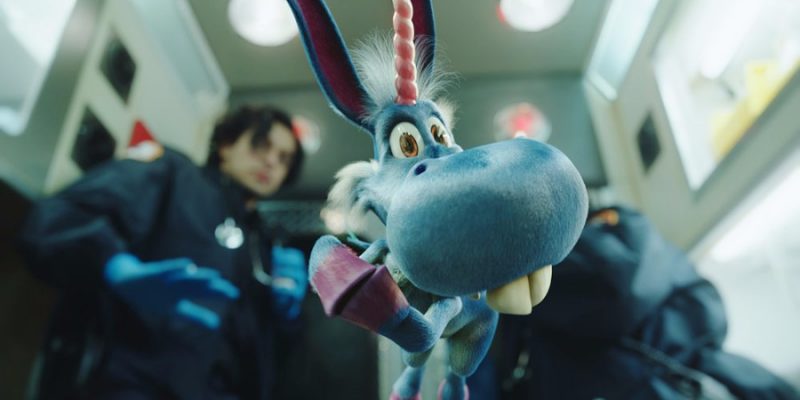 With the Season 1 Finale airing this week, fans of Syfy’s hit new show Happy! do not have to worry about its future any longer. With greater pleasure, I am so excited to announce that Happy! will continue to bring us chaotic joy for another season! Below is the press release from Syfy sharing the great news!

SYFY RENEWS CHRISTOPHER MELONI AND PATTON OSWALT
STARRER ‘HAPPY!’ FOR SEASON 2
From Universal Cable Productions, the Season 1 Finale
Airs This Wednesday, January 31
NEW YORK, NY – January 29, 2018 – SYFY announced today a second season pickup of the network’s original seriesHAPPY!, starring Christopher Meloni and featuring the voice of Patton Oswalt. From Universal Cable Productions, this twisted graphic novel adaptation has been hailed as “one of the craziest, most utterly off-the-wall TV series ever produced” by The New York Times Syndicate and launched as the network’s best series premiere since January 2016 across all key demos. The shocking Season 1 finale is set to air this Wednesday, January 31 at 10/9c on SYFY.
“HAPPY! struck a chord with our SYFY audience and disrupted the TV landscape with its unique storytelling and outrageous performances led by Christopher Meloni,” said Chris McCumber, President, Entertainment Networks, NBCUniversal Cable Entertainment. “If people thought this season was crazy – I can’t wait for fans to see what Grant Morrison, Brian Taylor and the entire cast and crew have in store for Sax and Happy!”
Based on the New York Times best-selling author Grant Morrison and Darick Robertson’s graphic novel of the same name, HAPPY! follows Nick Sax (Meloni) – an intoxicated, corrupt ex-cop turned hit man – who is adrift in a world of casual murder, soulless sex and betrayal. After a hit gone wrong, his inebriated life is forever changed by a tiny, relentlessly positive, imaginary blue winged horse named Happy (Oswalt). In the must-see finale, Sax and Happy are locked in a climatic confrontation to rescue Hailey (Bryce Lorenzo) from Very Bad Santa’s (Joseph Reitman) lair, as Merry (Lili Mirojnick) sets out to save Amanda (Medina Senghore) from a far more powerful foe. The series also stars Ritchie Coster (Blue) and Patrick Fischler (Smoothie).
HAPPY! is produced by Universal Cable Productions. Executive producers Grant Morrison (“Batman,” “The Invisibles”) and Brian Taylor (“Crank,” “Gamer”) co-wrote the pilot teleplay. Neal Moritz, Pavun Shetty and Toby Jaffe of Original Film (“The Fast and the Furious” franchise), Meloni and showrunner Patrick Macmanus also executive produce.