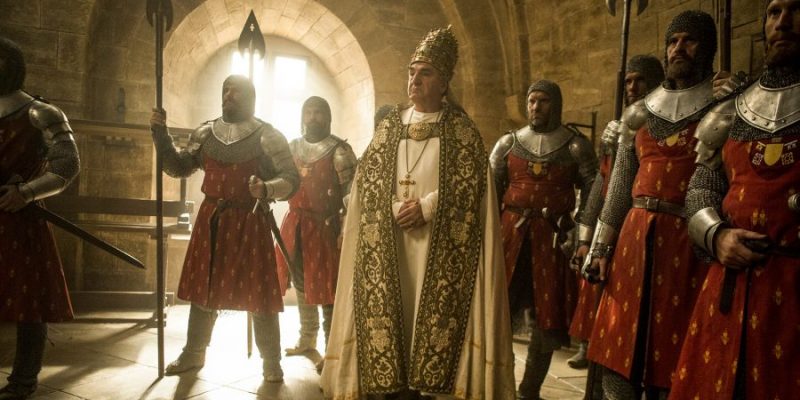 Knightfall: Battles For The Grail Begin As ‘IV’ Is Revealed – Review

At long last the Grail is found and headed to the Paris Templar temple, but there’s a series of storms brewing that will make the Grail the focal point of conflict and discovery even as William De Nogaret rises from the ashes to reveal a devastating secret.

We’re at the penultimate point of season 1 of Knightfall and this week’s episode, “IV,” provided clarity about who has been behind the machinations of the late Roland, the traitorous Pierre, and those attempts to find the Grail outside of the efforts of the Templars. Yes, we finally found out what “IV” meant and why, as Pope Boniface made his presence felt in a definitive and bloody way in this episode.

I haven’t trusted the guy from the outset and the work of Jim Carter in the role of the pope has been subtly menacing at times as he “seemed” content to have Landry and Templars do his work for him. We should have known that he had contingency plans in place and that securing the Grail for himself, no matter the cost, was always his goal.

In this episode we find out just how large a price he would pay to have the Grail in his hands, essentially dispatching papal forces to destroy the remaining Templars in the Paris temple. Remember, the majority of Templars were sent out in search of Parsifal (dead) and Roland (dead dead). 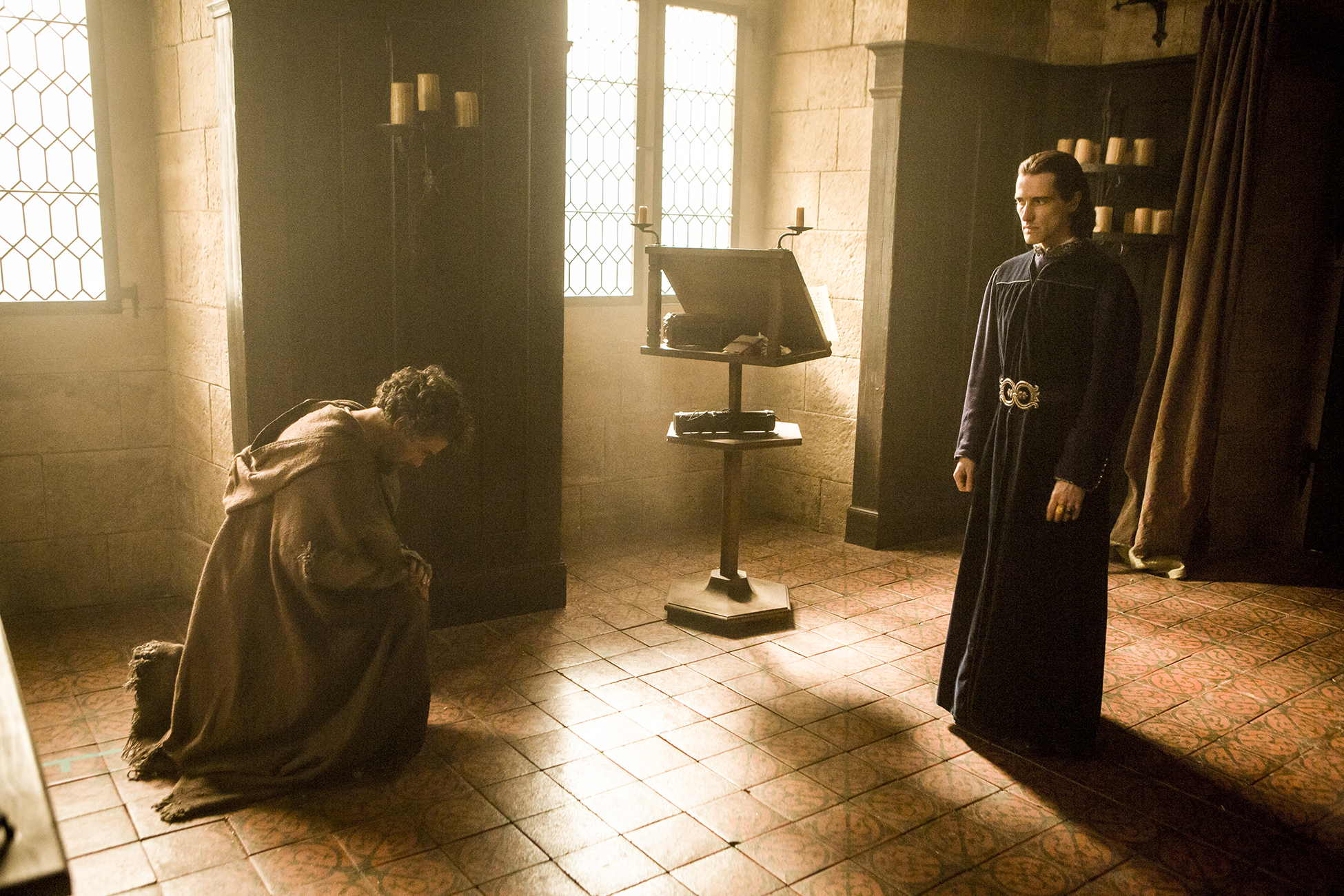 I thought the way “IV” was revealed was well done. The tags on the back of the Pope’s guards with the roman numerals were the clue that Landry finally put together. It was subtle, yet effective as the light goes off in Landry’s mind about who the mysterious presence that has dogged his steps in pursuit of the Grail has been — and who killed Godfrey.

And what ensued was plenty of exciting and bloody action as the rag-tag group of Templars, along with Rashid and Landry’s mom, Anna, (what a tough and badass momma she’s turned out to be – wow!) sought to simply survive the onslaught of the Pope’s guards. It’s a tough moment to swallow for Landry who had sought the Grail for the good of the church and the Pope, only to find out he’d been betrayed and lied to every step of the way by the Pope — who now seeks to wipe him out for the effort. Pope Boniface is nothing if not focused and merciless in pursuit of his prize.

Landry’s mother is a fearless lady, deadly with both sword and crossbow. She’s been an interesting and somewhat mysterious addition to the goings-on, hasn’t she? What else will she bring as we move forward? While she survived, I was devastated to see Rashid’s run on the show end in blood and death.

Rashid was a character that I enjoyed seeing. Akin Gazi should be congratulated on creating a character that while possessing a menacing surface, really had several interesting layers to him. His was a true desire to protect the Grail and keep it safe. Rashid and Anna seemed to sense that putting the Grail in the Pope’s hands was not the course that needed following. And even when Landry didn’t heed their advice, they stayed true to the cause. I shall miss Rashid. He was noble in life and death. And isn’t it interesting to see all the people and contingency plans Godfrey had put in place over the past 15 years? Wow, a lot of work by that Templar. 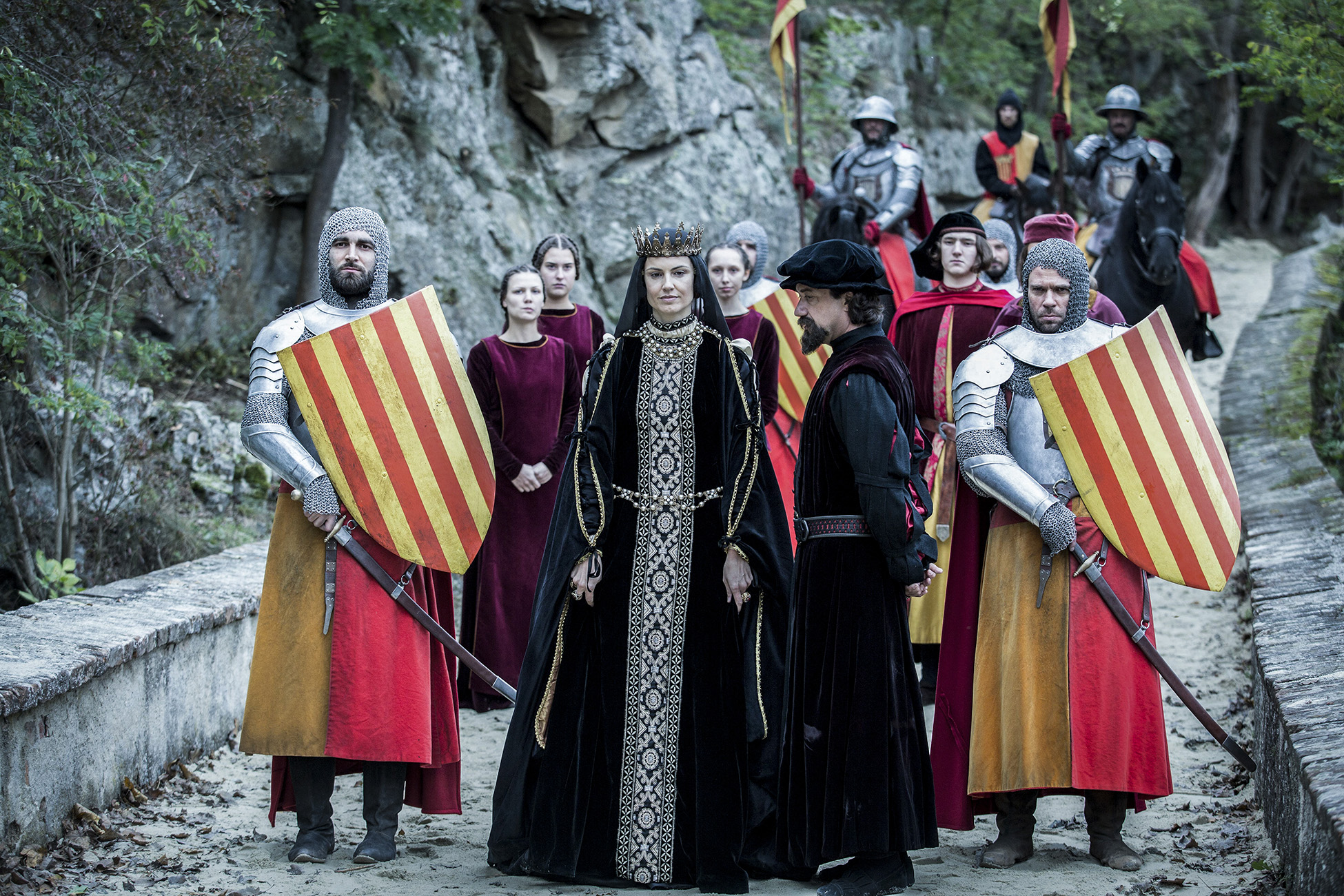 As the battle at the Temple came to a close, we not only bid Rashid a fond farewell, but were rewarded with the surprise return of Tancrede, who is a member of the Brotherhood of Light, it turns out. Clearly, the Brotherhood has its tentacles in many places and people, but this was a bit of a shocker. I was delighted  to see Tancrede leap from the roof and reveal himself to Landry and, in pondering the season, I can see little clues to this fortuitous riddle.

Let’s hope Landry, who must be emotionally spent by now with all the betrayals and unseen forces fighting him, does a better job of heeding the advice of people like Tancrede and Anna — who have proven their only goal is the keep the Grail safe. On a positive Landry note, I was elated to see him gut Pierre as the battle came to a close. Parsifal wasn’t one of my favorite characters, but I resented the way Pierre weaseled his way into the picture at the Pope’s behest. Slimy little underling, I’m glad he is no more.

I called it last week and here we go. De Nogaret, having pieced the Landry-Queen Joan puzzle together, manipulates his way into the presence of King Philip (at knifepoint, no less) and spills the beans about Joan’s pregnancy and who is involved. You can see the plan De Nogaret is massaging here — he can get rid of two people who have opposed him (Landry and Joan), while also destroying the Templar army and lessening Pope Boniface’s power in France (and Europe?). The pregnancy and the Grail’s arrival have given him the means to that end if he can just convince the king it’s all true.

I’ve waxed eloquent about my admiration for De Nogaret’s skillful manipulation of people and events, but I’ve come to appreciate that he’s got another motive — loyalty. I’m convinced that while feathering his own nest is of paramount importance to our former counselor to the king, another motivator is that he truly does love France and wants to help Philip (whom he deems less fit to rule than others) raise the country to heights he envisions.

Nevermind that others may see different paths, De Nogaret’s passion for his country drives him on as the only one who can see the “right” path the country must take. It’s an interesting character that Julian Ovenden has given us to examine. Once again, the surface of De Nogaret is only a small part of the man and his mission. Peeling back the layers reveals a deeper desire not just for himself, but France. 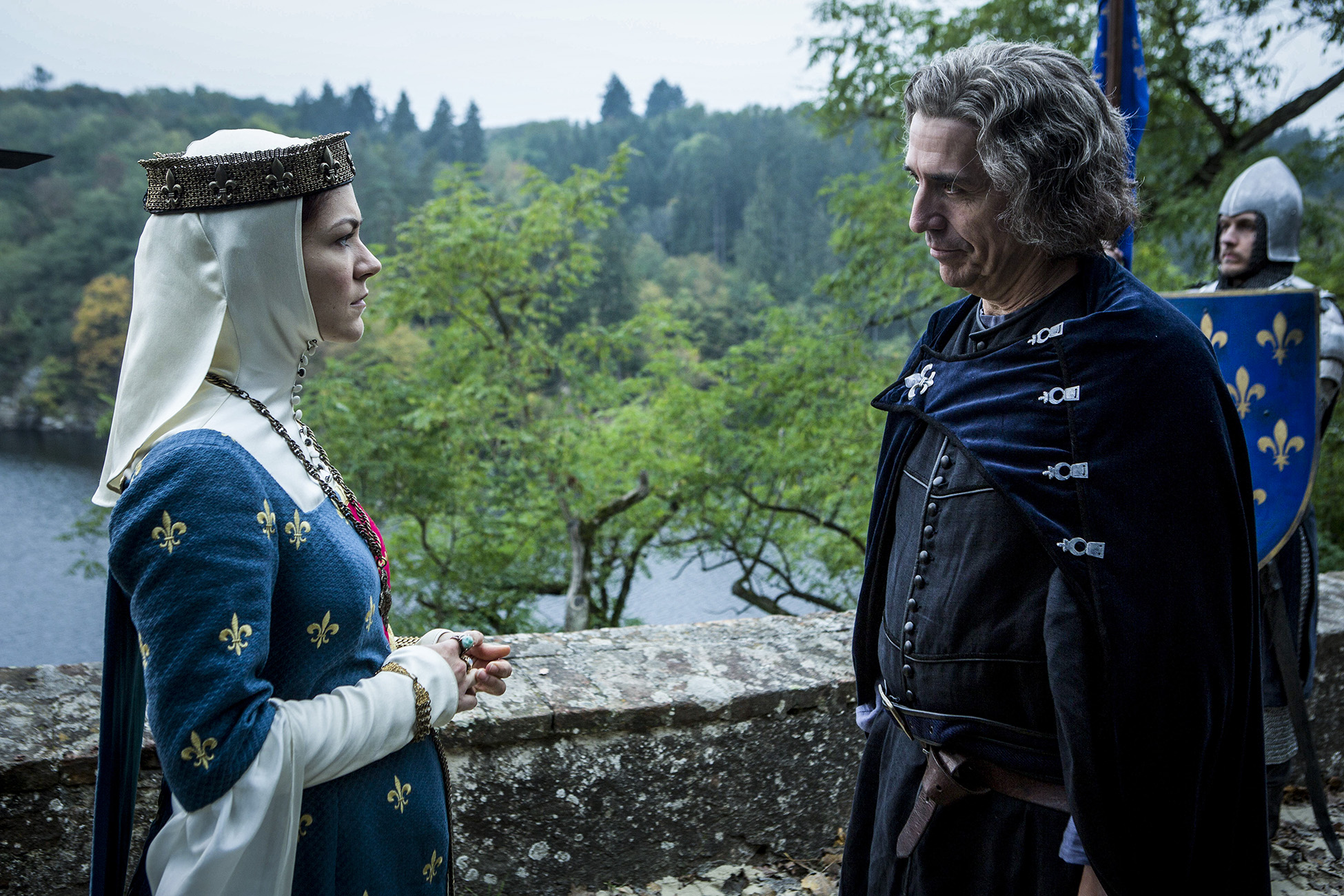 Now, fortified with a chest filled with money, you can see the clash between the Red Army of mercenaries and the Templars is imminent. War of a different kind is coming to France. I keep wondering how Landry will have the strength to fight that kind of battle given all he’s endured mentally and physically. But, my guess is we’re going to find out. If De Nogaret is successful in convincing the king of naughtiness, Landry’s list of enemies will expand greatly and he and Joan will be in very real danger.

Speaking of Queen Joan, forgive me if I congratulate her on finally doing what needed to be done and gutting Elena, queen of Catalonia. Elena was a very dynamic character in her brief appearances on the show — regal, domineering, vicious and with a malicious streak running right through her physical beauty. She demonstrated all this on her visit to France previously, then again in this episode as she attempted to engulf Navarre. Claudia Bassols was a delight as Elena, creating a character that you almost immediately loathed while also being fascinated by what could be motivating her. Well done.

What was motivating her in Navarre was grief at the fiery death of her son in France. She had convinced herself that while Navarre was a nice prize, what she really wanted was “retribution” for her loss. Asking Joan to sacrifice either the child growing in her belly or Isabella seemed a little over the top, but a grieving mother seeks solace in unknown places. Given that, I was glad to see Queen Joan, in a moment of weakness by Elena, gut her on the palace floor. As she said, a mother does what a mother needs to do. And she did….in a bloody fashion. while fascinated with the character of Elena, I gave Joan a little “fist pump” when she went prison rec yard on the Catalonian queen. 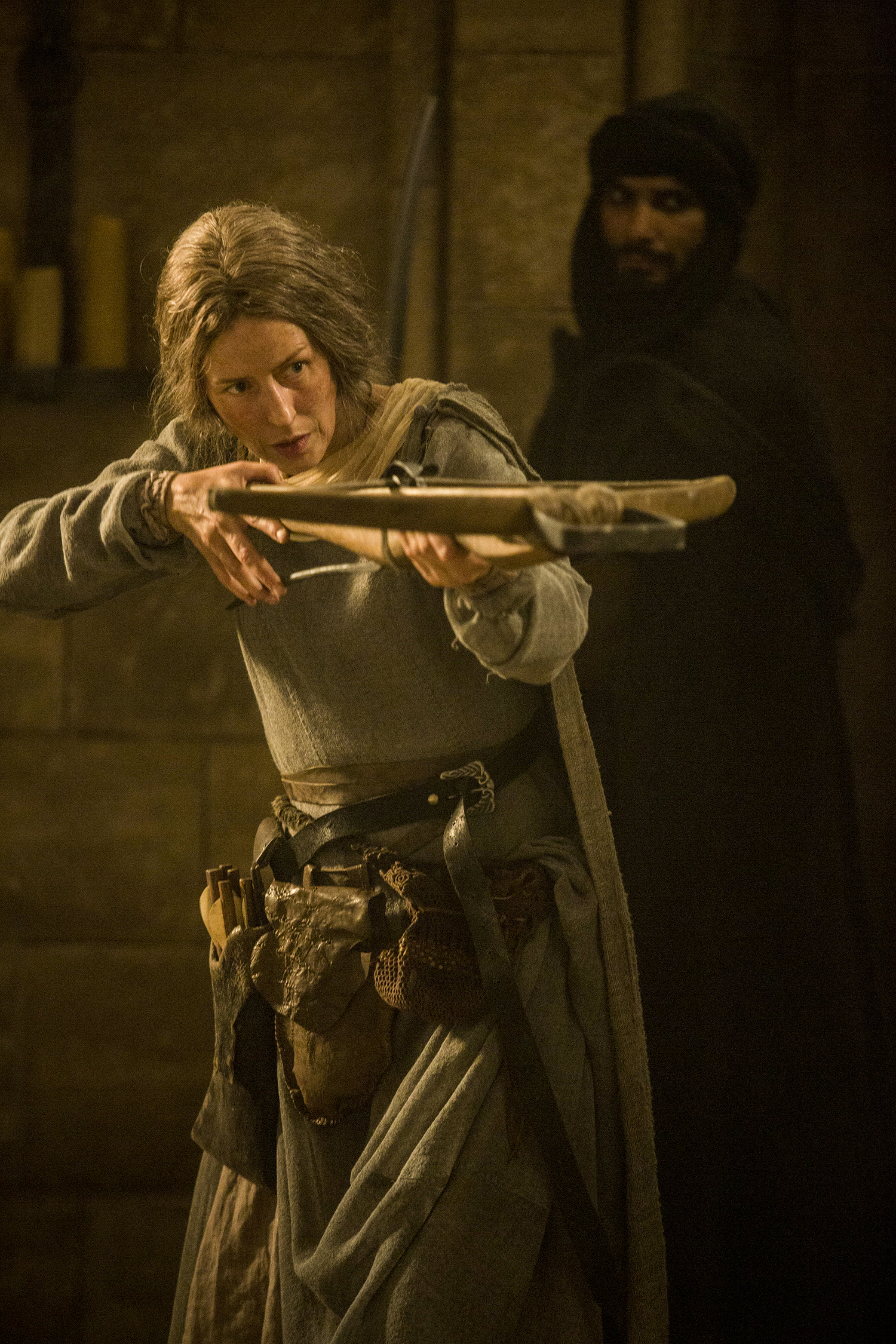 Now, she must return to France where her husband is not only angry at her for running off, but suspicious of her and the baby’s origins. It would seem that Philip and Joan are about to butt heads once again, with De Nogaret pulling some of the strings.

Yes, the Grail has been found and now the Pope has it. Funny, but my instincts tell me that the Grail will change hands a time or two more before we see the conclusion of Knightfall’s season 1. As Landry noted when battling with Gawain after finding the grail, it’s an item that has driven men “mad.” And what of Gawain? Again, the logical plot course would be that he comes into the employ of De Nogaret and the Red Army he is forming to battle the Templars. We’ll see if that comes to pass.

I think Knightfall has really found its stride the second half of the season and now that the Grail is in the open, and so much conflict seems likely to emerge for so many characters, it feels like the homestretch is going to be powerful and loaded with still more twists and turns. Hang onto your swords, folks, there’s more blood to be spilled.