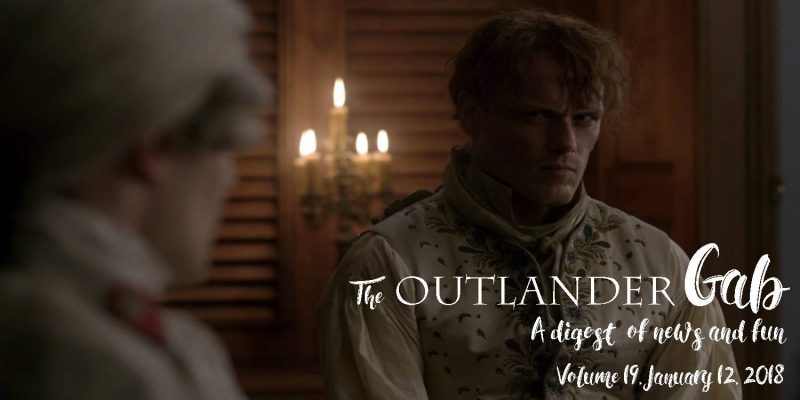 Outlander Gab – Catching up on the Outlanderverse

Happy New Year! I apologize for the long break between  issues – until Season 4 really starts to ramp up, The Gab will come out every other week instead of weekly. So let’s catch up!

Speaking of Chris Albrecht (whom I met when I covered the red carpet at the S1 Part 2 premiere – here’s a photo of him with showing off the event button I made and gave to him that night), Crain’s Chicago Business reported this week that his wife has been purchasing units in a Lake Geneva, WI mansion-turned-condo building, and turning it back into a mansion. This lovely little town is 45 minutes from my home, and we’re up there several times each summer – wonder if we could talk them into hosting a season premiere there! 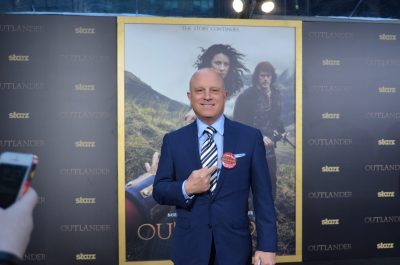 Sam and Caitriona talk with EW about shooting the underwater scene.

An oldie, but very interesting – The National Trust for Scotland Foundation writes about transforming historic sites for the show. Here, they detail the process of creating that famous “mill” scene.

Celtic Life Magazine features Bear McCreary, talking about how he works (ALL the time, it sounds like!).

I forgot to post this picture after episode 311 aired. This is where the “audition” for Coco happened. We picked the perfect Coco from this box of contenders 😂 #Coco #FatherFogden @Outlander_STARZ pic.twitter.com/4OB7yenS2m

You know Caitriona was up for a Golden Globe award this past weekend, for Best Actress in a Drama Series (sadly, she lost to Elizabeth Moss in The Handmaid’s Tale). But you may not know that Outlander SoCal Edition, a fantastic group active in the Los Angeles area, cheered on our lovely Cait from the street outside the theater – something they’ve done before!

Look at these legends!!! Made themselves the talk of the party!!! Thank you all so much !!! You absolutely made my night. And everyone in the bleachers!!!! 😘😘 pic.twitter.com/oqOTUpEx4Z

Of course, Caitiona looked stunning, and was, as always, graceful and lovely.

Thank you so much @goldenglobes for the most beautiful empowering night. Just shows that positive messages are moments to celebrate too. Thank you @CHANEL for my exquisite gown @marywilesmakeup @HarryJoshHair and @TaraSwennen for glam 😘 pic.twitter.com/WujuYPMTwD

The biggest “Get This” right now, if you can get to Chicago in August, is a ticket to meet Sam and Caitriona at Wizard World, an annual sci fi convention! They will be featured in a panel (no details available, and probably not until the beginning of the summer at least), and will sign autographs and take pictures. None of this is cheap – a Dual Gold VIP pass, where you get a photo with the two of them and you, and individual autographs, plus a host of other perks, runs over $500. There are also individual VIP passes, with a photo with one of the stars and an autograph from that same star, and lots of perks – that’s over $300. Of course, you can buy regular admission and individual photos and autographs to suit your budget. There will be stars from many other shows attending, panels, autos, photos, a large sales floor for your inner nerd, and much more. Go to the Wizard World Chicago website for more info.

Then, in my Facebook group, Outlandishly Three If By Space, find our “Sam and Caitriona” event and join that – we’ll have all the latest news about fan get-togethers, tips for newbies, sightseeing, transportation and roommate info, and more. Yes, I’m going! I live just outside of Chicago – you think I’d miss this???

Another favorite author’s latest book comes out this month – Pierce Brown’s fourth book in the Red Rising series, Iron Gold, is out next Tuesday! Close friend Sam Kraupner and I will be attending a book signing on the 23rd, and hope to convince Mr. Brown to come out for a drink. If you haven’t read Red Rising and the others in the series, Golden Son and Morning Star, WHY NOT? They’re definitely what I call “hard” sci fi, but absolutely fascinating, and beautifully written. Pierce is terrific with his fans, as well! I’ll be reviewing the book as soon as I finish it! Check out his website.

Season 3 of The Magicians has started! Check out Michelle Harvey’s review.

Netflix has a new sci fi series coming out on February 2 – Altered Carbon – and it looks like something I’m going to like. Tom Gardiner says the show is “a detective story about people who can change bodies like we change pants (if you wear pants) and death is only a temporary setback.” Read Tom’s preview and see a trailer for the show here!

Have you been watching Knightfall on The History Channel? What do you think so far? Here’s John Baker’s review of the fifth episode.

Would you like to write TV, book or movie reviews? Love sci fi, fantasy, anime or manga? Three If By Space is always looking for great writers who want to share their opinions with the world! PM me on Facebook (Erin Adams Conrad), DM on Twitter (@ErinConrad2) or EM (OK, email) at erin.conrad@threeifbyspace.net!