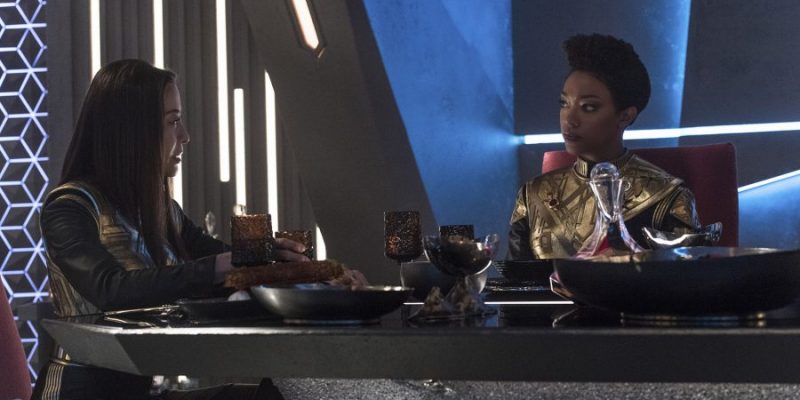 As it turned out, all Captain Lorca’s are not created equal — or even from the same universe. That’s right, the big twist in Episode 12 of Star Trek: Discovery, “Vaulting Ambition,” was that some how, some way, the Lorca from the evil mirror universe had inserted himself into the Federation’s universe with one purpose — to get back to the mirror universe using the Discovery and Burnham to attempt another coup against the Terran emperor. Got all that? Me too.

Now, originally I’d been under the assumption that this episode was going to solidify my space crush on Michelle Yeoh’s Giorgiou character as the cruel overlord emperor. And while my heartstrings were certainly strumming at the joyful wickedness of Emperor Georgiou (her badassery is intoxicating), there’s no denying that this episode turned into a “what the heck” series of events. Star Trek: Discovery just keeps finding a nice sweet spot week to week.

Burnham’s decision to fess up the the emperor moments before being put to death put a lot of interesting things in motion, the most mind-blowing of course was that Lorca wasn’t Lorca — at least not Burnham’s Discovery Lorca. I’m hoping we get a little backstory on how Terran Empire Lorca was able to slither his way into the captain’s chair in the Federation universe. And does that mean that original Discovery Lorca is, shall we say, retired….permanently?

It was a great bit of storytelling to have the emperor discuss everyone’s relationship and what kind of man her Lorca was while having Burnham flash back to the things he’d told her when she first came aboard — and suddenly the puzzle started to come together. Well done, writers. It was quick, crisp and easy to follow. 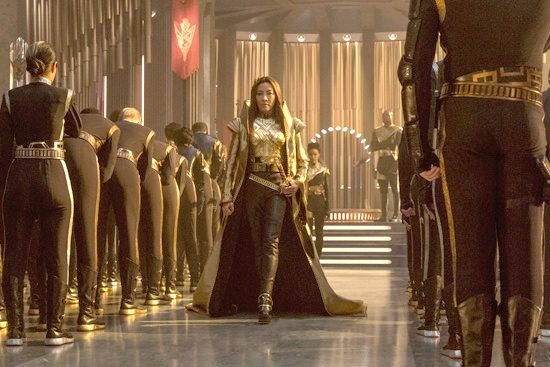 Emperor Georgiou strides through her subjects after welcoming Captain Burnham back to the fold.

I suspect there’s some vital information Lorca gleaned from the records of the USS Defiant years before. I’ve been talking with social media folks about what might be in the offing and I posited the theory that someone from the Discovery crew was going to end up staying behind in the mirror universe as part of the rebellion.

Perhaps, though, it’s “wrong” Lorca that ultimately stays in the mirror universe to continue the fight against the emperor. Or perhaps he succeeds in overthrowing her and seizes power for himself. That should be a fascinating story moving forward. Those redacted files on the Defiant could hold some clues that might prove useful? Or not.

Now back aboard the emperor’s ship I.S.S. Charon, what are Lorca’s plans? Will he free some of his people to help with the coup. If you caught the teaser for next week’s episode, it seems that may be in the offing. Kind of has a “Kahn-like” vibe in the air, doesn’t it? It would seem there’s a fight brewing, but on whose side should Burnham land? Can she trust anyone in a universe that prizes manipulation and opportunism?

There’s always something reassuring about discovering that a dynamic despot is also intuitive and intelligent (as well as manipulative, cruel and merciless). And Emperor Georgiou is all those things, isn’t she? In the end, Burnham really had no recourse but to be throw down her guise and tell the emperor the truth — and learn the truth about Lorca in the process. 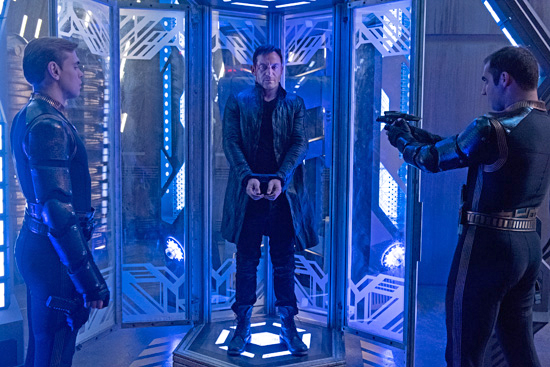 So we’ve kind of got that “enemy of my enemy is my ally” going on, it would seem. It will be very interesting to see how this all plays out over the next episode or two. I do not envy Burnham and the decisions she’s going to have to likely make moving forward. It just seems that pain and disappointment are her lot in life right now. And can we really trust this mirror universe emperor to act with the honor and integrity she said she shares with Burnham’s former captain? It’s safe to surmise that the plot twists aren’t quite done with this strange love/hate triangle of Georgiou, Burnham and Lorca.

While this was all unfolding, and granted it’s a vitally important component of what’s to come, there were two other interesting little twists rolling along aboard the U.S.S. Discovery. First, Lt. Stamets was taking some sort of Mycellial trip without even leaving the farm. Using the spores as a healing agent was a smart idea by our own Captain Tilly (for now, anyway) and we saw the effects of the treatment from inside Stamets’ mind.

He met his mirror universe self (didn’t trust that guy from the start), wandered the halls of an empty Discovery and got to have a final conversation with his partner, Dr. Hugh Culber. It was a touching reunion that, we hope, has delivered some closure to what surely carries a lot of pain and emotion for him.

Culber and Stamets enjoyed a moment of shared closeness that was not only touching, but helped send Stamets back to the reality of the Discovery (“Just open your eyes,” Culber implored him.). Wilson Cruz (Culber) and Anthony Rapp (Stamets) delivered a wonderful little story that was heartfelt and touching in the midst of all that is going wrong in the mirror universe. It was well done and moving by both. Spot on, lads. 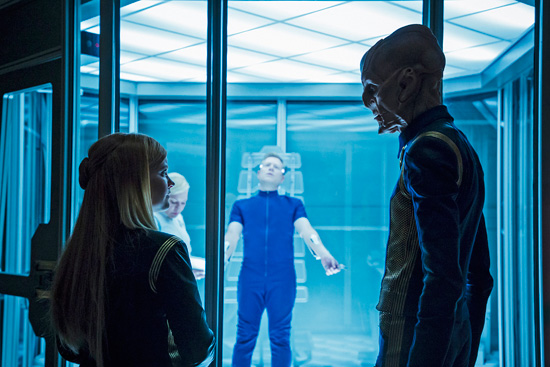 Sylvia Tilly and Saru discuss the treatment of Lt. Stamets.

So now the question is — what does Stamets know and how can they use it? He seemed very focused and confident in what needed to be done as he and Tilly raced out of the research lab. Yes, the jungle habitat would seem to be damaged beyond repair, but my guess here is that his intimacy with the spores will allow him to do something special. It feels like Stamets sees a path home, but will need to mend some things aboard Discovery before that.

First, though, the Georgiou, Lorca and Burnham are going to have to hash out there difficulties.

In all honesty, one of my favorite story lines running through Star Trek: Discovery is the Ash Tyler as Voq mystery — and how L’Rell is kind of holding so many threads of it. I was a bit mistaken in thinking that Voq was Tyler when it looks as though Voq and Tyler are sharing not only the body, but the consciousness of Tyler. Talk about a man being torn apart inside, I can’t fathom the battle the two are waging within that human form.

Saru demonstrated a nice bit of empathy for the torment that Tyler is undergoing and implored L’Rell for her help not once, but twice. For as much of a warrior as L’Rell is and her devotion to her people and the ways of the late T’Kuvma, there’s a healthy dose of compassion and feeling for Tyler/Voq. So, she’s attempting a medical procedure that she said will fix the situation, but there’s got to be more to it than simply wiring up the fingers and putting the brain through its electronic paces (and letting out a nice Klingon battle cry). Were I Saru, I think I’d have a few more security people with phasers at the ready rather than the single red shirt I noted as things progressed. 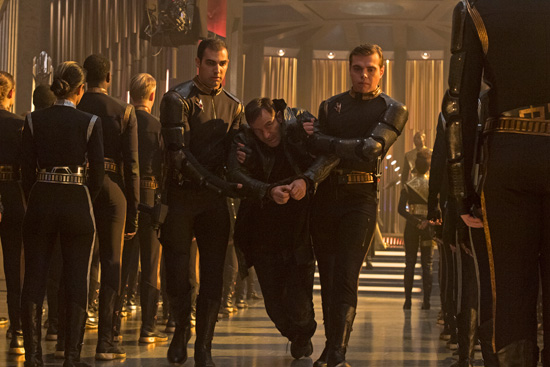 Captain Lorca being led away aboard the emperor’s ship.

Is she drawing Voq out of Tyler? Is she completing the process so that Voq is in total control of the Tyler form? Or is there something else entirely at play here? And when the Klingon dust finally settles, where will everyone stand? I find L’Rell to be a fascinating character and enjoy the alternating tones actor Mary Chieffo brings to the roll. From defiant to tender, from warrior to nurturer, L’Rell is a complex and fairly mysterious character, which I take great pleasure in watching, even in limited screen time.

As stated earlier, Star Trek: Discovery just keeps getting better and better. This week’s episode was extremely well done and interesting with plenty going on that leaves you anxious for the next installment. I’ve got to also mention that the props and sets for this series are first rate and far elaborate than most of what we’ve seen in the Star Trek realm. I’m encouraged by how good the show looks week to week and that the financial investment being made in the show is truly paying off.

Yes, it’s not your father’s Star Trek, but it shouldn’t be. It should be something entirely its own while adhering to the core values of Star Trek as a whole. And I think this show does that very well at this point. It won’t always be perfect and certainly not to everyone’s liking, but that isn’t required. That was enjoy the journey is. And that’s happening week by week.