While it may seem like forever since Star Trek: Discovery went on break after “Into the Forest I Go” on Nov. 12, fans won’t have to wait long for its return. The final six episodes to finish off the first season will begin on Sunday, Jan. 7, on CBS All Access.

As you recall, Starfleet officer Michael Burnham has had quite a wild ride – betraying her captain, seeing her captain killed by a Klingon, essentially igniting a war with the Klingons, being court-martialed and sentenced to prison, getting “borrowed” by Captain Lorca for spot duty aboard the U.S.S. Discovery, finding a sliver of hope and purpose aboard the Discovery, and much much more. 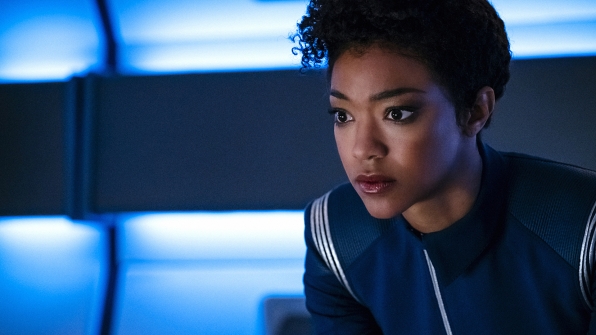 Star Trek: Discovery returns for the second half of season one on Jan. 7.

When we left Burnham, Lorca and the Discovery crew, they had made one last jump with Lt. Stamets that left them in a place that seemed familiar, but also wasn’t. Did they jump back in time? Forward? To a parallel dimension?

The final episode of season one’s “first chapter” left us with hope for the future before delivering us to what is obviously a strange place. What’s left will be developed over the final six episodes of “chapter two,” with the conclusion of the season on Feb. 11. Look for the next episode, “Despite Yourself,” to start to shed light on how the Discovery will get back home.

The summary of the Jan. 7 episode states, “While in unfamiliar territory, the USS Discovery crew is forced to get creative in their next efforts to survive opposing and unprecedented forces and return home.”