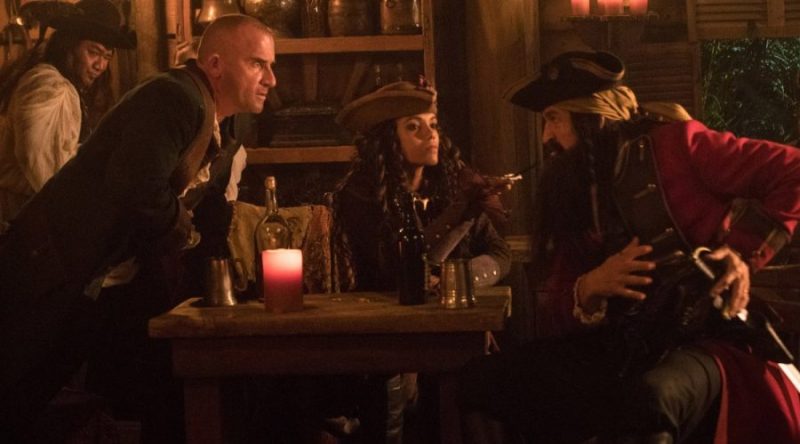 DC’s Legends of Tomorrow: The Curse of the Earth Totem – Review

There’s nothing better than some swash buckling pirates and lots of rum! Which is where our lovely Legends finds themselves in the middle of when they track down the Earth Totem. The recent episode: “The Curse of the Earth Totem”, takes us on quite the adventure. Yet, sneaking out while your captain is on a date, may not be the best of ideas!

Now, we all know that our Legends are quite rebellious, but you would think that after all the bad things Damien Darhk has done recently, that they wouldn’t risk going somewhere without Sara. DC’s Legends of Tomorrow is really getting things set for a big showdown between the Legends and the Darhks Then again, maybe I am crazy and it makes perfect sense for them to just take off. In, “The Curse of the Earth Totem”, the gang is on a mission to make sure Darhk doesn’t get his hands on anymore totems. Nate figures out where the Earth Totem is and it is decided to leave while Sara is on a date. 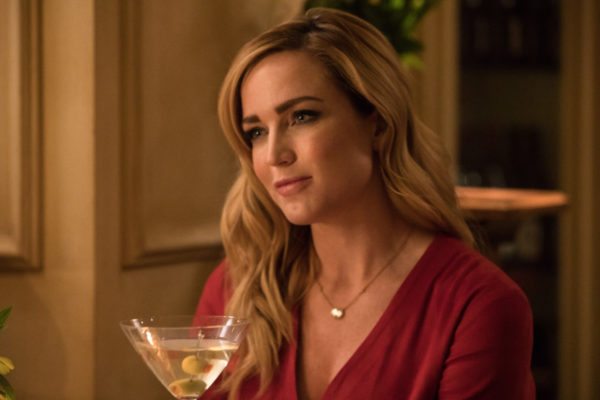 Who is lovely Sara having a date with? Why, it is none other than Ava Sharpe. We all knew it was getting to this moment, even if it was rather slow. Ava was working pretty hard to get Sara to make a move.They of course look so lovely and quite sophisticated with their martinis. Not shaken of course, only wimps drink it shaken. While they are on this little date, Gideon decides to rat out the rest of the crew and informs Sara of what is going on. Love you Gideon! And with the bad luck the Legends always have on missions, it is only a matter of time before Sara is called into duty.

So, “The Curse of the Earth Totem”, takes us to 1717 where Nate has discovered that the Earth Totem is in the hands of the notorious pirate, Blackbeard. Who doesn’t love dressing up as a pirate? Argh mates! Oh wait, Amaya doesn’t like being a pirate. That’s right, I totally forgot about her pity party she was holding, while everyone else was trying to find Blackbeard. Quick thinking on Mick’s part quickly has Amaya wrapped in a very interesting tale as Captain Jawe. The other pirates begin weaving tales about her adventures and how ruthless she is. And boy, does that get her in the mood and also captures the attention of Captain Blackbeard. Perfect timing, let’s get down to business! 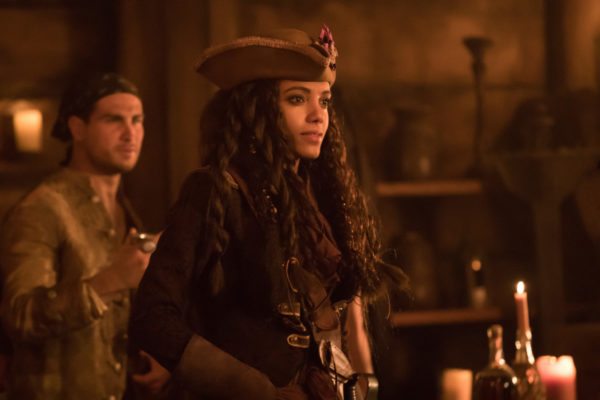 Unfortunately, Darhk is always one step ahead of the Legends. He makes his timely appearance right before Mick and Amaya can convince Blackbeard to tell them where the totem is. Which is also convenient because Ray and Nate had to return to the Waverider. Who’s idea was it to go to 1717 and park the Waverider in the middle of the Bermuda Triangle? Yeah, because that was a smart idea! With the Waverider malfunctioning because of its location, the crew has no choice but to return to Sara and leave Mick and Amaya dealing with Blackbeard. Honestly, these guys are full of more bad luck than they are good! This leaves Mick and Amaya in a bit of a sticky situation, one that goes from bad to worse.

With the powers that Darhke and Nora have, they quickly overcome Mick and Amaya. Darhke takes the totem from Amaya and then the three of them are whisked away to the gallows. Things are looking very bleak for Mick and Amaya. While all of this is going on, the Waverider has made its way back to 2018 and interrupts Sara’s date night. Of course, Sara being Sara, she leaves money on the table and dashes out of the restaurant. Little does she know that Gary is relaying some very interesting news to Ava. Something to do with a long brown coat and time traveling stuff, oh yeah, and Gray getting pants….. Yep, Rip is at it again! But this time, he has brought a little friend with him.

As we all know, Rip escaped the custody of the Time Bureau and has made his way to Wally West. Rip has informed Wally that he wants to recruit him to join the Legends. Yet, can Rip really be making theses sort of decisions? I mean, Sara and the team literally kicked him off the team and handed him over to the Time Bureau.  Rip has a hard time convincing Wally that he needs to get back into the game. So, what do grown adult men do when they have lost everything? They go get wasted, torment poor Gary and then sing karaoke! It was a lovely moment the two shared and it was very enjoyable for all of us as well. These two make an interesting team and I am looking forward to seeing how the Legends will react once Rip and Wally show up. And trust me, they will! 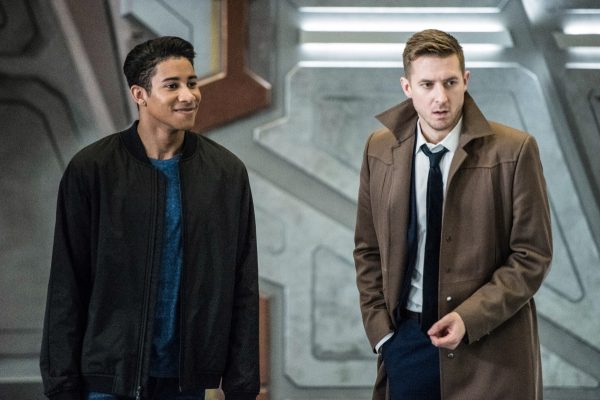 On the Waverider, Ava and Sara start to hash things out, while Nate steals Ava’s time courier device. They open a door to 1717 in order to provide some backup. Amaya and Mick are able to put up a pretty good fight, but with the powers the Dahrk’s have, they need a little extra something. And here is where things take an unexpected turn. Ray ends up shooting Nora with this new gun he has been working on, in order to save Amaya. Now, everyone else is probably cheering for joy right now because it is obvious she is dying, which Ray also confirms later on to Nate. Sadly, Ray is taking on a lot of guilt over it.

We all assumed we were out of the woods. Nate and Amaya are back at it again, which involved some role-playing. Sara and Ava are about to take their relationship to the next level, but not everyone is very happy. Unfortunately, the guilt is way too much for Ray and so he creates a serum that will save Nora. He just can’t help himself. Even though he has good intentions, he really should have known better. His plan to save Nora and retrieve Amaya’s totem were all fine and dandy, but he should have known that the Darhks wouldn’t play nice. The last thing we saw was Ray passing out, so we can assume he is alive. But, for how long will he stay that way? What will Damien Darhke do with him? Tune in next week for an all new DC’s Legends of Tomorrow, to find out if Ray lives or dies!