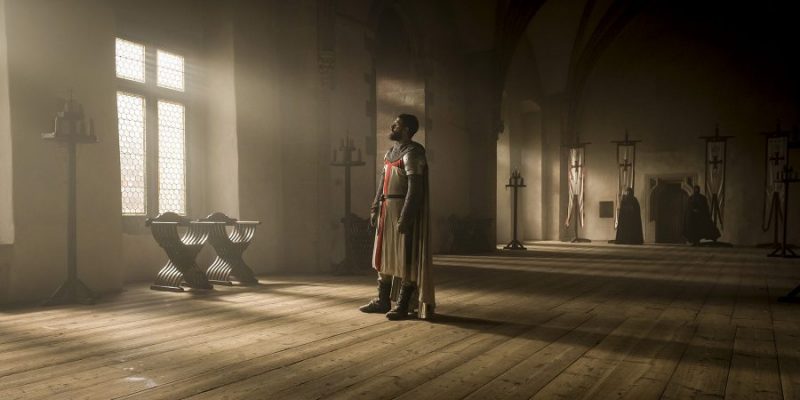 When the latest episode of Knightfall ended, I had two questions that nagged at me almost immediately — what did Landry’s mother tell Pope Boniface to make him do a complete 180 on killing Landry, and now that the Grail is out, how many times will it switch hands by the end of this season?

Sure, not weighty questions, but I’m not a very deep or insightful soul. Just a guy who loves a show that delivers great writing and performances and often leaves me curious about certain moments. And while the Grail will no doubt be the subject of a “hot potato” game through the finish of this season (and that should be interesting), the question of what kind of knowledge “momma” dropped on the Pope is one that intrigues me to no end. It must have been, in a word, massive.

Episode 9, titled “Fiat,” pushed Landry and the Templars in a new and dangerous direction after the Pope’s duplicity in Godfrey’s death and other machinations were exposed. Unfortunately, seeking an ally in the Templar’s grand master didn’t turn out as Landry had hoped. Most notably because the Pope had anticipated this move and was there first. Say this about Pope Boniface, he has a certain intuitive malevolence that serves him well.

In retrospect, it was a pretty daring plan Landry was seeking to get rolling — denouncing the Pope and using the Templars to essentially overthrow him. You could see the issue with this plan as it unfolded — Templars rising against their spiritual leader? That’s not going to be easy to do no matter the cause nor desire. 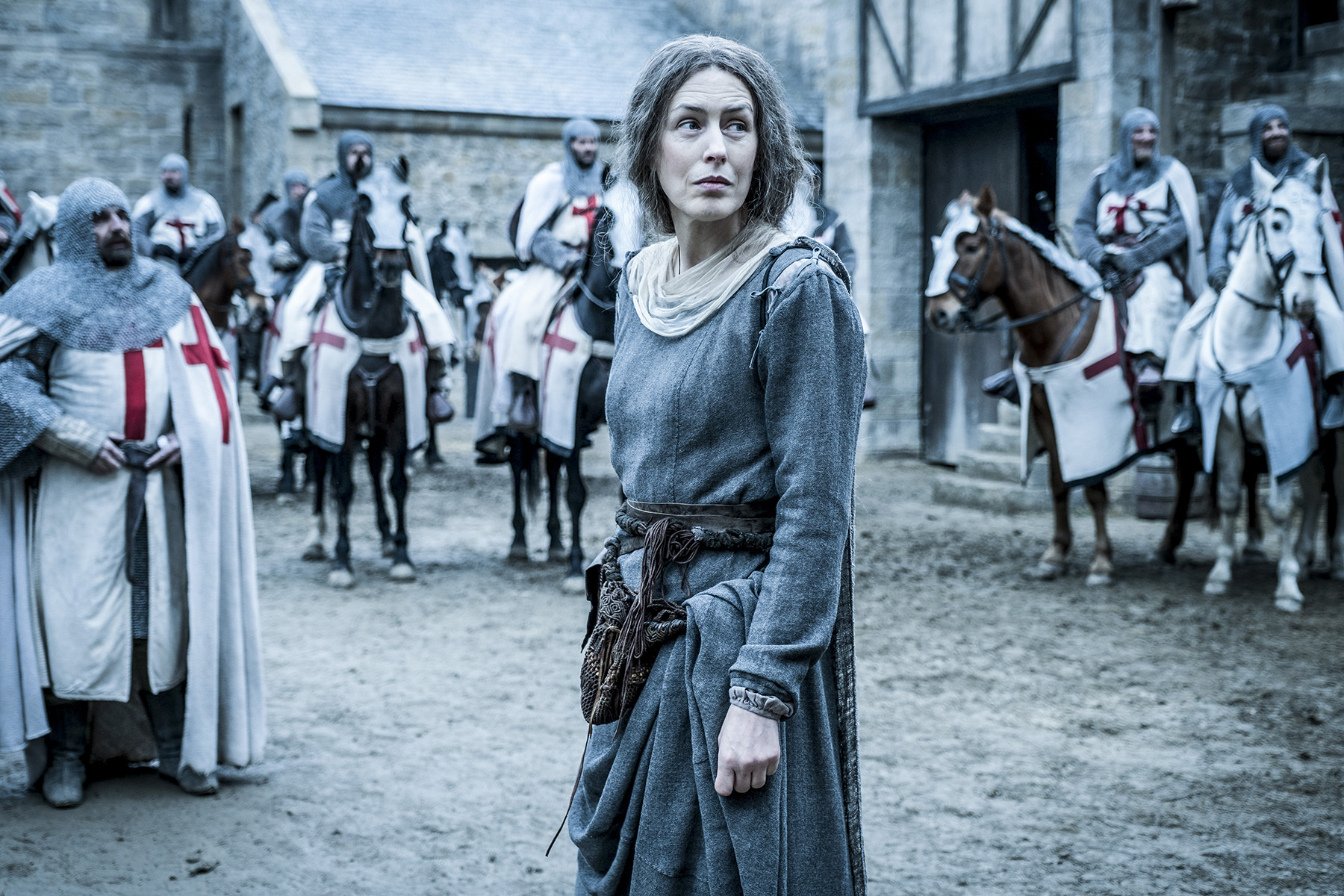 Of course it didn’t go as planned and Landry found himself on trial before the grand master and the Pope, a trial that could only end in his ex-communication and anathema, including a nice burning at the stake. It was nice to see that Gawain was on hand to lend his testimony to Landry’s apparent downfall. He’s such a joyfully friendly fellow. He did have a great moment when Landry, spitting venom at his former “brother,” called him a Judas. Gawain, calm as you please, simply said, “That would make you Jesus.” Ooh, a barb into the psyche of his former friend, particularly given the moral failures our hero knows he had committed.

One thing about Gawain. Did you notice his injured knee? He had some form of a knee brace on, which leads me to believe that he’s been in league with De Nogaret since last we saw him. I’d posited the theory that Gawain and De Nogaret would engage in a bloody bromance now that Gawain had fallen so far. And I’m guessing that brace is a product of that union thanks to the King’s physicians. It was a little thing, but given the carrot De Nogaret was waving in front of Gawain earlier, I thought it was telling.

Let’s face it, anytime Gawain shows up now there’s going to be some action. So, his testimony, which was half-truth, half-lie, was an interesting addition. The rift between he and Landry would, it seems, be permanent. With one episode to go, I’m looking for a showdown with swords drawn and pithy comments delivered. Given that their time together in this episode ended with Gawain driving a large sledgehammer into Landry’s knee (here, feel my pain, bro), I’m looking for blood to be spilled. 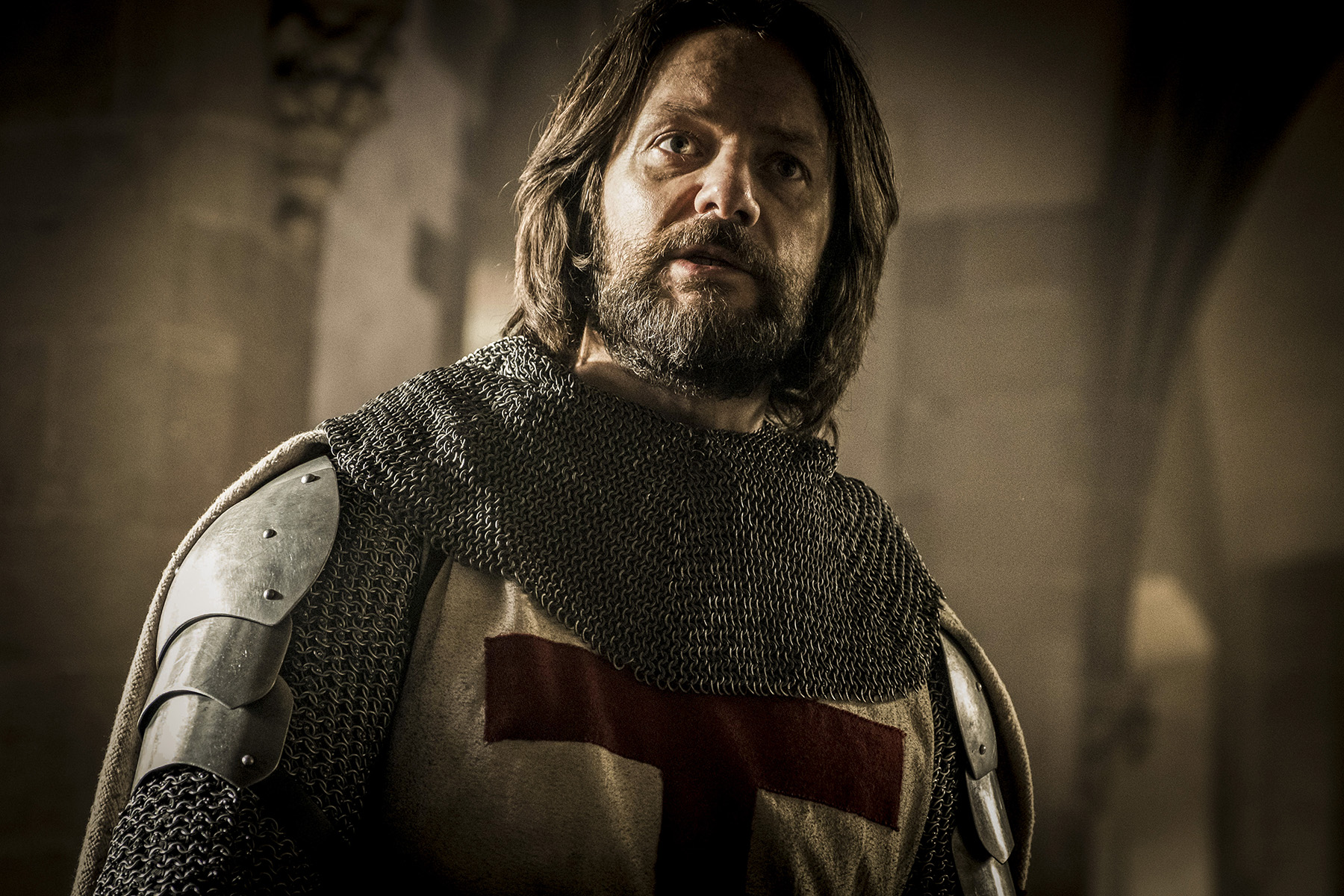 But I can’t help but go back to the interaction between Pope Boniface and Anna. Landry’s mom has been wonderfully mysterious since she entered the fray. She says so much while saying so little — but when she does speak her words carry weight. And apparently, what she told Boniface about the Grail was dynamic in its impact. In truth, I can’t fathom what she might have told him that would so completely and devastatingly change his mind. Is it truly about the Grail or is about the Grail and Landry together?

And Anna, who seems to possess an intimate knowledge of the Grail and it’s history and power, what part does she play in all of that? Given that she was a woman of low-born breeding, she must have really had something spectacular to share given the Pope’s reaction (and his obvious arrogance). My mind reels at what it could be. And of course I’m dying to know what she said. I also enjoy Anna’s vibe as a whole. She comes off as a somewhat frail, older woman at first blush, but beneath that veneer is a fiesty, tough, intelligent, instinctive operative with as much guts as a burglar. 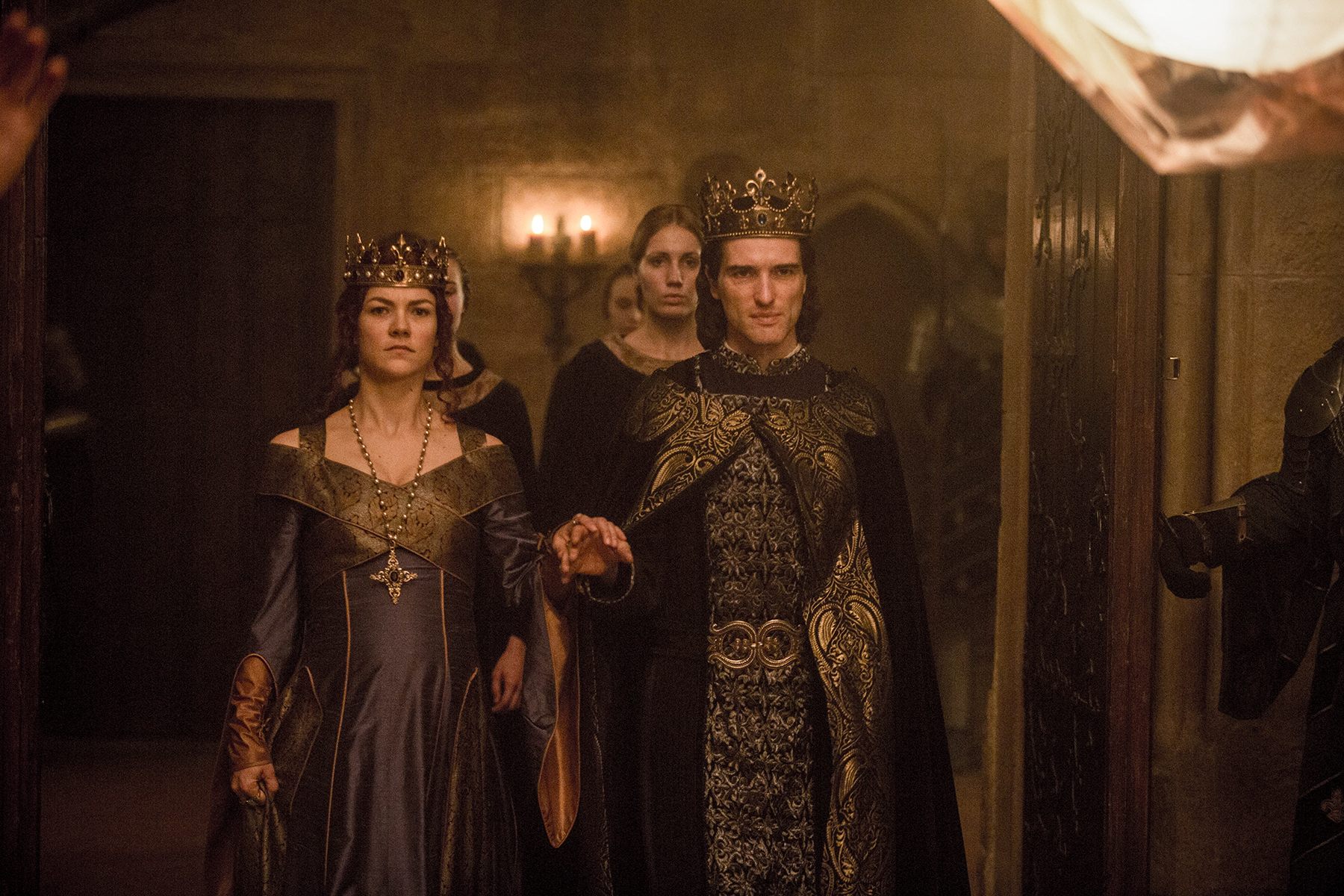 It’s fairly obvious that Queen Joan’s demeanor upon her return to Paris did nothing to convince King Philip that she didn’t dally with Landry. De Nogaret planted the seed, but the queen certainly added fertilizer to the crop with not only her appearance (out of sorts, etc.), but with her poorly conceived plan to leave the castle with Isabella in-tow. Once again we find that the princess can be a testy little thing when she digs her heels in. Particularly when she uses De Nogaret’s hidden passage and peep holes to overhear the truth of Joan’s baby. Sometimes it does pay to sneak around. Isabella has a vicious streak in her, though. Interesting.

She betrayed her mother and that poor Sophie, who got beaten bloody before the court. I admit my heart went out to her as first the guards, then the king, beat her as everyone watched. Being a lady-in-waiting to the queen is certainly not an easy job, particularly when you’re trying to betray a king who is, shall we say, in a foul mood. And I liked Sophie. So here’s to you, Amelia Clarkson, for your portrayal of Sophie as a loyal soul. I hope we see you again. But I’m guessing not.

The dynamic between Philip and Joan has really changed in the last couple of episodes as the strain of the illegitimate baby and the Navarre situation has developed. And with De Nogaret apparently back to whisper “sweet nothings” into the king’s ear, you can see Philip’s patience is at an end. Well, I suppose in this case De Nogaret’s whispers were factual, so we’ll give him that one. I have to believe that the queen is going to make a break for it (I’m certain she’ll be confined to her room rather than a dungeon). 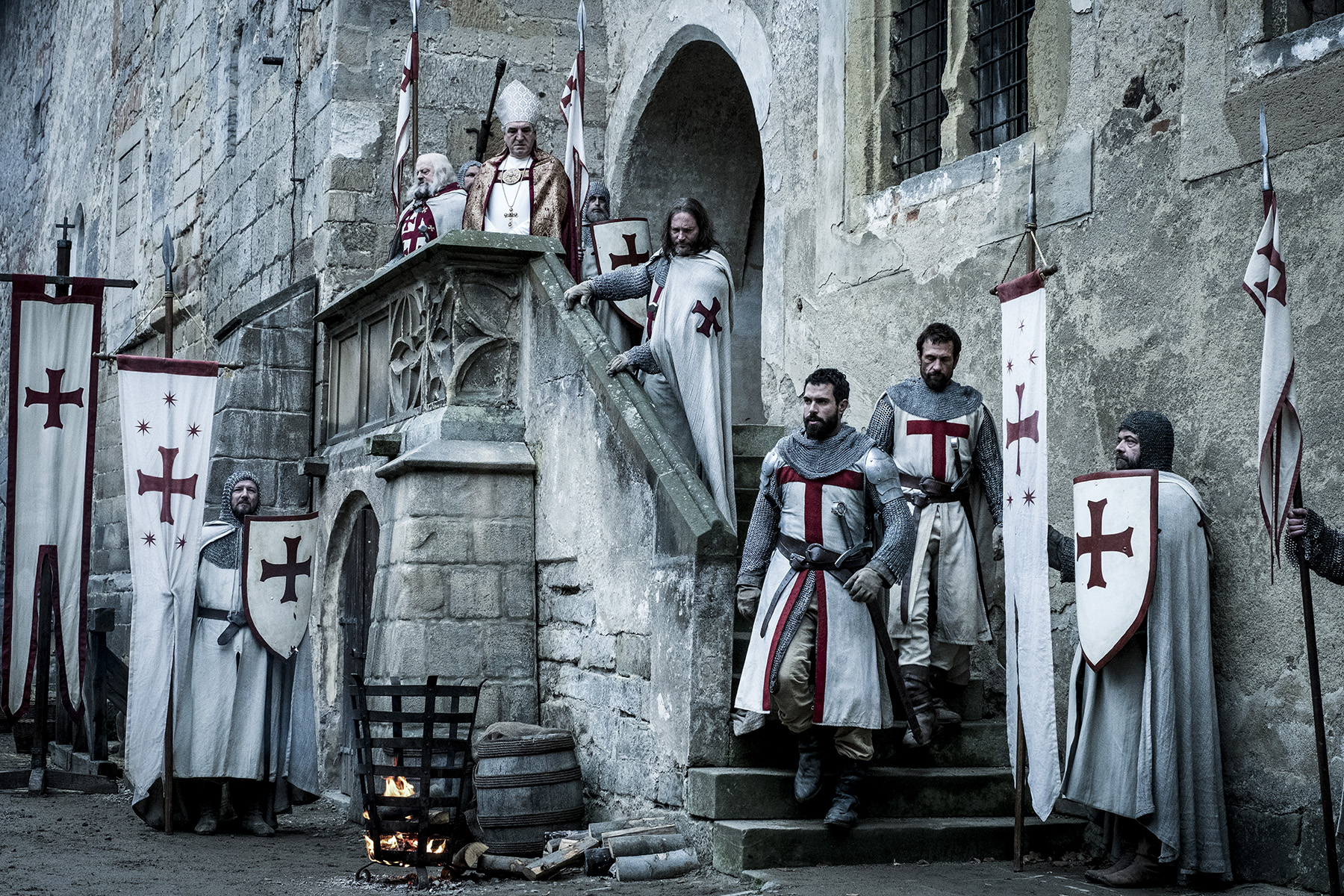 You can see a darkness coming over Philip as he learns all he had hoped for and trusted in has been betrayed. We’ve seen glimpses of good King Philip and hopeful King Philip and generous King Philip, but I suspect now we are going to see that part of Philip that maimed the lute player in a jealous rage all those years ago. Mercy may be in short supply as we head toward the season finale.

And all the while, the Grail was changing hands. At first it looked as though Tancrede would get his hands on it. But that was not to be as De Nogaret’s minion, the ninja-like Altani made an appearance and made off with it. So, from its hiding place to Landry to Pope Boniface to Altani and now likely to De Nogaret, the Grail continues its strange and deadly odyssey to who knows where. My honest guess is that De Nogaret will give it to Philip to cement his return to favor and that the Grail will likely be stolen again.

Perhaps the queen will get her hands on it as she tries to make a getaway from Paris? I think it’s fair to say that the Grail does drive men mad and that we haven’t seen the last switch in possession for it. I am a bit amazed that it continues to just “sit out” like it has so far. At least the sisters had it in a box hung up and hidden in foliage. Oh well, a small quibble, to be sure.

So here we are, one episode left in the inaugural season of Knightfall. I’m looking to see if De Nogaret puts his “Red Army” of mercenaries into play, and if so, what will that mean for the Templars and Landry. Can Queen Joan get away from Philip? In whose hands will the Grail rest when the final frame clicks off? Will Gawain complete his total Anakin Skywalker transformation and fight against his former brothers? Still so much to be revealed as this season comes to a close. See you there next Wednesday night.