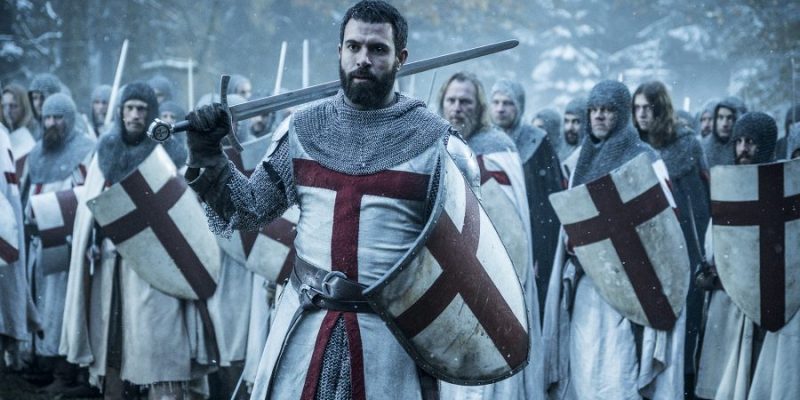 Knightfall: Blood, The Grail & A Reckoning In Finale – Review

At long last the mercenary forces of William De Nogaret and King Philip made their play against the Templars. And a titanic battle it was, including a twist (though not a surprise) with Gawain taking leadership of the mercenaries as he squared off against his former brothers. The Knightfall season finale featured blood-soaked swords, splintering shields and more than a little eye-gouging and kicking. All-in-all, good fun.

But while the battle raged, in the midst of the cacophany of pain and dying, a subplot played out with Landry. I’ve talked a few times about Landry’s travails — from Acre through the Grail search — and posited the theory that I thought the trail he walked turned more and more disenchanting, creating a lonely, solitary figure more. So much of what he thought he knew turned out to be in error, or shrouded in mystery, or simply a lie.

My feelings upon seeing the season finale of Knightfall, “Do You See the Blue?” was that my initial thoughts were correct, and manifest themselves during the battle when he was cut-off from his brothers, lured into an interesting trap by old pal Gawain, herded by himself a safe distance away, and forced to fight the one man he didn’t want to – King Philip.

It was a scene arc that solidified my feeling the Landry was a man very much alone on many fronts. As the Grail search unfolded, he found that what and who he believed in weren’t necessarily all they appeared. That has to wear on a man, even a flawed man and Templar like Landry. 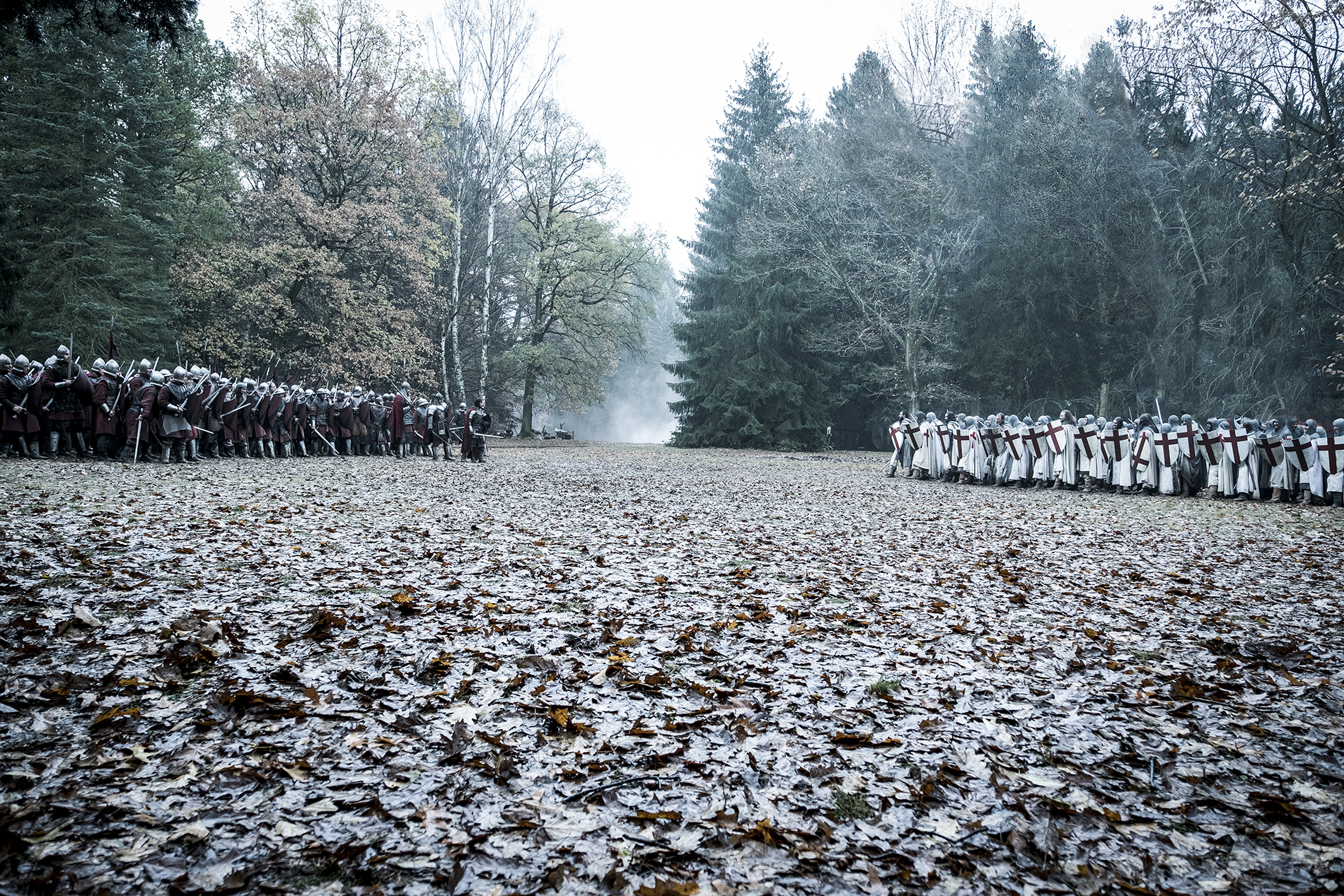 The Red Army and the Templars square off in HISTORY’s New Drama Series Knightfall.”

Alone in that red box of shields, it was judgement from a king that he was facing at last. Not the King of Heaven and Earth, but the king who ruled the land and people of France – and he was pissed off. Still, the symbolism caught my attention. I thought that moment, when Philip walked into the trap to face Landry, was extremely telling. Philip essentially laid bare the hurt and turmoil Landry had helped deliver, not just to the king and queen, but to himself.

It was a great moment. In a way, the pain Philip inflicted on Landry could easily have been representative of the inner pain Landry has had to contend with since the season started.

And in the end, Landry would live, Queen Joan would die by Philip’s hand, and their baby would survive, which should make season 2 (Yes, I’m that optimistic) very interesting. Wonder where that story will start off.

Funny, but last week I’d teased that the Grail was likely to change hands a few more times. I may have underplayed that one. Let’s see, the Grail went from Altani to De Nogaret to King Philip to Queen Joan to Landry to the base of a tree where it was in pieces, to a strong box after the battle and then into an enterprising Templar. For a valuable item like this, I’m surprised the security around it has been so….lax. 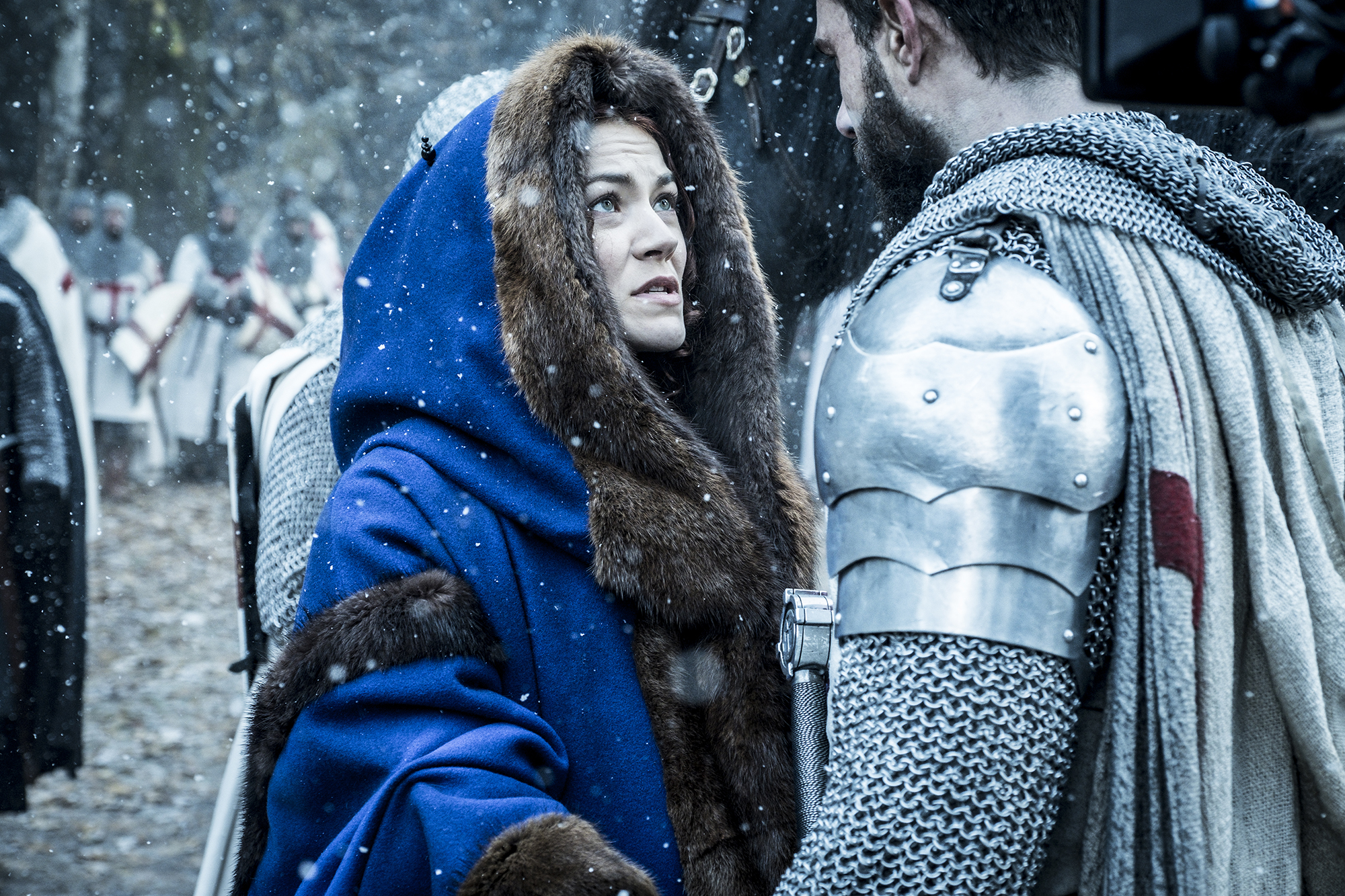 However, if nothing else, we got one more mystery at the end of the season finale. As always, there’s more than meets the eye in the Templar ranks. In this case, a Templar uncases the shards of the Grail remains and knows to dig into the base of the cup. There, he finds a small parchment with names written on it — the last of which is Landry de Lauzon. Another Brotherhood of Light operative? Who can say at this point?

I”m guessing this has something to do with Landry’s mother’s conversation with the pope that saved his life. Is Landry a “chosen one” of some kind? A prophet? A living embodiment of Christ? I love scenes that offer a story without any dialogue and this was one of those types of scenes. Nothing said, a visual with an interesting twist, and the speculation amongst fans can truly commence.

And Landry’s mom, what’s the deal with her? Is she a prophet? An oracle of some kind? A transforming angel? I’m looking forward to finding out in season 2 (see what I did there?). 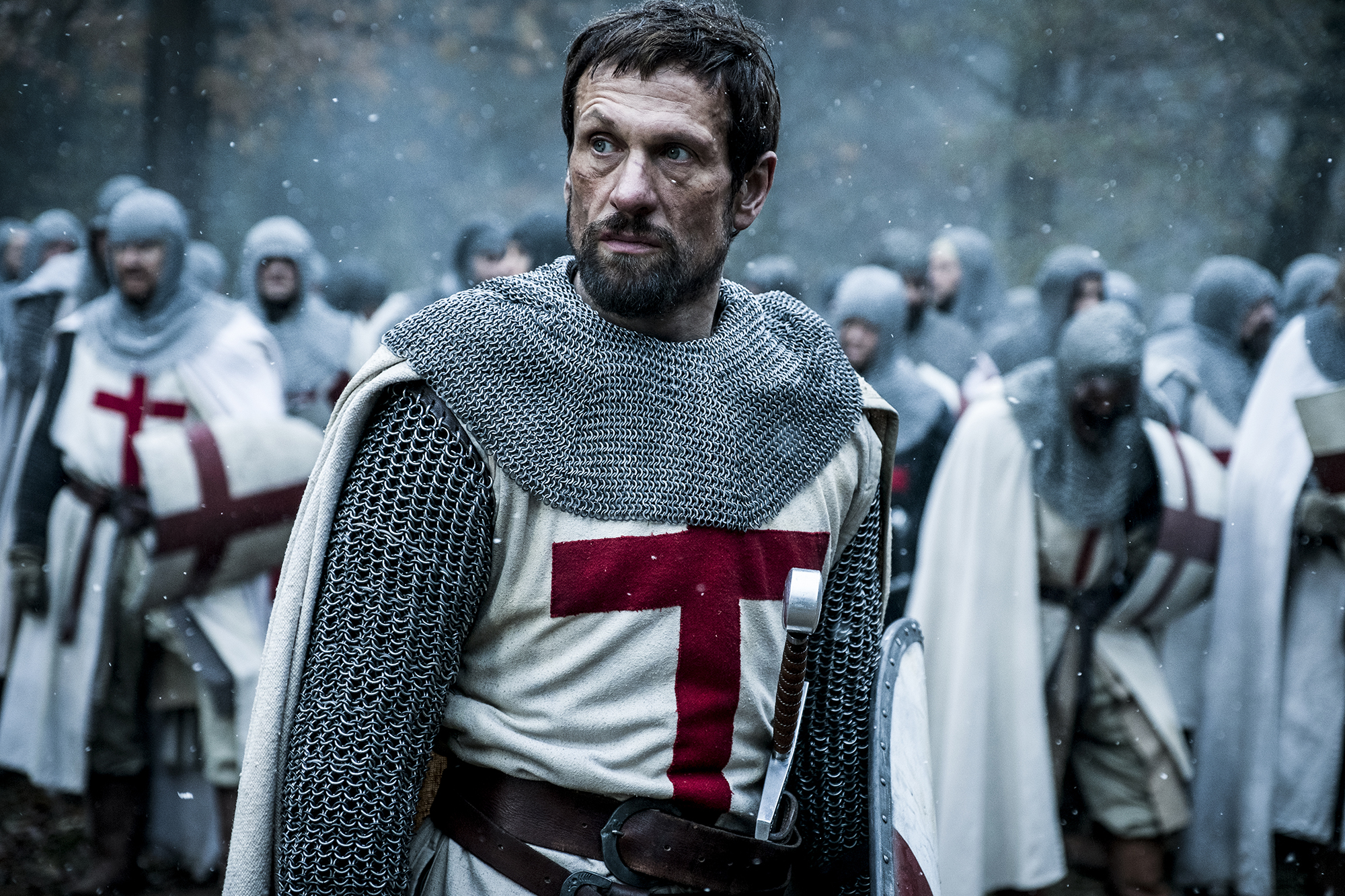 Tancrede (Simon Merrells) before the battle in the season finale.

In the end, another clue about the Grail’s importance, King Philip got to exercise a little emotional turmoil on the man who crystalized it (Wasn’t it interesting that he spared Landry after sticking a sword through Queen Joan.) Maybe the friendship he felt for Landry helped him look past the pain and simply take something away from Landry that he loved, rather than take Landry’s life. It’s possible. What’s De Nogaret’s role moving forward? What about the Pope and Landry’s mom?

There was plenty revealed in the season finale, but still plenty of questions left to answer in season 2 (see, I did it again). What’s the relationship between the Templars and the King of France moving forward? I don’t think they’ll be sharing a bottle of wine anytime soon.

Looking back on the inaugural season of Knightfall, I can’t help but revert back to the opening of another History Channel hit, Vikings. It took a couple episodes for each to find its footing, but like Vikings, Knightfall engaged fans quickly and deeply. I loved this show quickly.

The show is wonderfully written, thoughtfully and powerfully acted and delivers visually appealing outdoor and indoor scenes. I find it engages my senses weekly. The final battle, with small flakes of snow falling….loved it. There’s a lot in Knightfall to engage the viewer and I found it easy to get dialed into a number of characters very quickly. From Tancrede (welcome back, big guy) to De Nogaret to Gawain to Landry to Landry’s mom and even Godfrey, in a brief appearance, there are characters in the show that pull you in and make you want to know more about them. 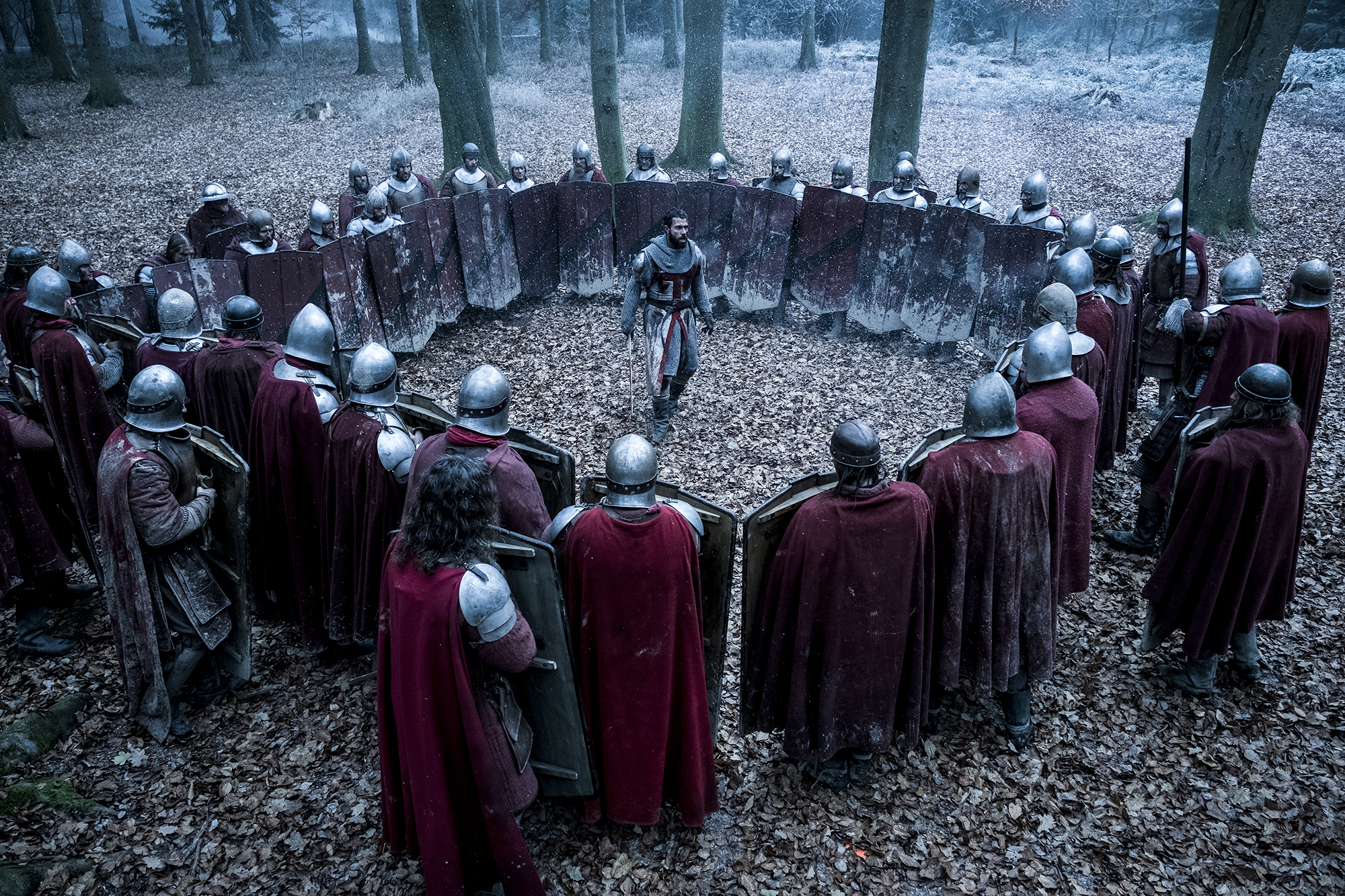 The mercenary army surrounds Landry in the season finale of Knightfall.

And judging by the passion of fans along the social media wires, it’s also clear that fans have come on board in a passionate way. From simply enjoying the storytelling from show to show, to analyzing the relationships and storylines in comparison to actual historical events, Knightfall has a lot to offer the casual viewer and those more invested.

Personally, I love knights, swords and action, but I also enjoy a good story being told and Knightfall delivered unto me those things that I love. I’m going to be shocked if there isn’t a season 2 of Knightfall, and more than that, heartily disappointed. This is a show that deserves a few seasons to tell the stories and back-stories of its characters.

And besides, De Nogaret needs more time to plot, manipulate and scheme his way to the very top. After all, isn’t that what we all want?

So, here’s a personal thank you for the efforts to Tom Cullen, Jim Carter, Padraic Delaney, Simon Merrells, Julian Ovenden, and Olivia Ross, Ed Stoppard, Nasser Memarzia, and their fellow actors who built these characters for us. Congrats to the writers, directors and show runners who brought this first season of Knightfall to us.