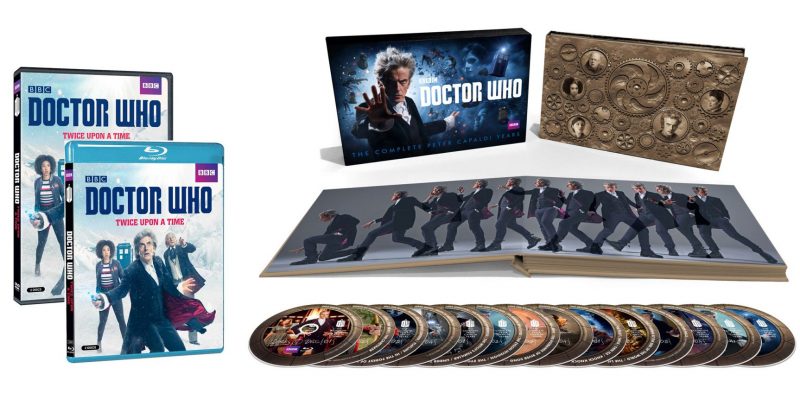 Saying goodbye is always difficult, sometimes more difficult when you know it’s coming, but it’s an integral part of Doctor Who. Whether he’s your favorite, or just average in your mind (who ARE you?!), Peter Capaldi was a very well-loved incarnation of the Doctor. I was sad to see him go, even though I’m doubly excited by Jodie Whittaker taking over the role. And I’m sure when her time to change comes I’ll be just as sad.

Tomorrow, February 13, 2018, BBC Home Entertainment will be releasing a couple of things all Whovians should be ecstatic to see. First, we’ll see this year’s Christmas Special, Twice Upon A Time, on both DVD and Blu-ray. That’s enough cause for celebration, but BBC America isn’t content to just deliver the holiday-themed romp and regeneration episode. In addition, they’ll also be releasing Doctor Who: The Complete Peter Capaldi Years, but only on Blu-ray. So if you’ve yet to upgrade from DVD and want to see Capaldi in all his glory again (and again and again) I suggest you consider a nice Blu-ray player (and this set, of course).

So grab some Jelly Babies, fish fingers, and chips (but no pears. Never pears!), sit back, and enjoy all the Capaldi goodness a Whovian could want.

Here’s the full press release just for you (and everyone else):

New York – February 12, 2018 – On February 13, 2018 celebrate the end of an era as BBC Home Entertainment releases Doctor Who: Twice Upon a Time, the highly anticipated 2017 Christmas special, on Blu-ray and DVD, and Doctor Who: The Complete Peter Capaldi Years on Blu-ray, featuring never-before-seen bonus content.

DOCTOR WHO: TWICE UPON A TIME

Twice Upon A Time – the final episode of Peter Capaldi’s tenure as the Time Lord, which found record-setting success with its Christmas Day airing on BBC AMERICA – sees the Doctor come face to face with…the Doctor! The epic conclusion to the Twelfth Doctor era features the return of Pearl Mackie as well as special guests Mark Gatiss (Sherlock) and David Bradley (Game of Thrones, the Harry Potter movies), and culminates in a historic regeneration that introduces the Thirteenth Doctor, played by Jodie Whittaker (Broadchurch). Newcomers have the perfect opportunity to catch the new Doctor’s adventures from the very start, while fans of the Classic series will be delighted by the return of the First Doctor (Bradley, who previously played the very first actor to take on the role of the iconic Time Lord in 2013’s An Adventure in Space and Time). Bonus content on this Blu-ray and DVD release includesDoctor Who Extra.

The Complete Peter Capaldi Years includes all three Twelfth Doctor seasons plus Peter Capaldi’s very first appearance in Doctor Who – years before he took over the iconic role – as Caecilius in the Tenth Doctor episode The Fires of Pompeii. Chock full of extras – with all of the bonus materials from seasons eight, nine, and ten, plus a new disc full of additional content, including never-before-seen deleted scenes from season eight – this Blu-ray set is a must have for any collector.

Doctor Who returns this Christmas