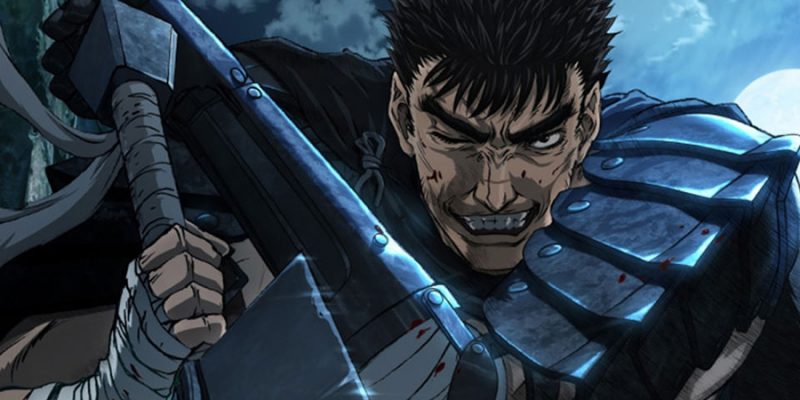 The first season of Berserk on Blu-ray and DVD punches all the entertainment buttons I have. Before I explain why I like it so much, you should know this anime series derives from a long running manga. I have not read the manga, and will not make any comparisons to source material.

The main character, known across the land as the Black Swordsman, goes by Guts with his few friends. Picture a guy like the Hound from Game of Thrones, but with a prosthetic left arm and right eye sewn shut. On his neck, he bears a small tattoo that summons demons on a nightly basis. He can beat the demons, but still. The inconvenience of it wears on him, but then again, he likes to fight.

If you watch enough anime, you’ll start to feel like you’ve seen everything. That said, I’d put Guts up against any other mortal fighter from any show. He’s relentless. Plus, he wields a sword about as wide as a desk and about as long as a section of railroad rail. A little like Thor’s hammer, no one else can manage his sword. When he gets it going, he can cleave bodies in half, six at a time. Although his prosthetic arm contains both a large cannon and a hand cranked repeating rifle, he saves that for when he’s really mad.

Everything feeding Guts’ need for revenge happened way before the events of the first season. This season depicts Guts along his way to make things right. All of the adventure unfolds from there. He meets people wanting to hang out with him, others wanting to destroy him, and even comes across a few people he genuinely likes. One in particular, Casca, shares some history and a neck tattoo with Guts. When local religious zealots abduct the poor, mind-wiped girl with the intention to sacrifice her, Guts diverts from his revenge mission to rescue her. Call me old-fashioned, but an unlikely hero leaving a trail of bodies in his wake trying to save someone will get my heart racing every time. 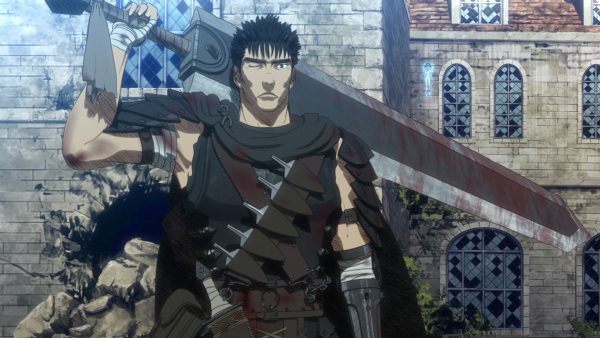 Just another berserk day on the road for Guts. Image copyright 2017 by Crunchyroll.

Most of the animation looks great, but the style divides the audience. The shading uses an interesting overlay of diagonal pencil line “hatching” to give everything depth. I like the effect, others don’t. Occasionally, you get some less-than-lifelike animation on a couple characters. In those cases, the computer-iness of the animation stands out, but since the worst offenders are some of the strangest characters, the dead-eyed stares fit right in. You can buy it as a style choice rather than a side-effect.

Offended by extreme violence, animated full body nudity and a little course language? Berserk won’t work out for you. We get right to the edge of tentacle-porn in one spot. The show also casts a Judeo-Christian-like religion in a pretty negative light. They don’t come out say what faith they subscribe to, but the angel wings and talk of apostles will help you draw your own conclusions.

Watch It or Leave It?

Watch it. Let me know what you think.