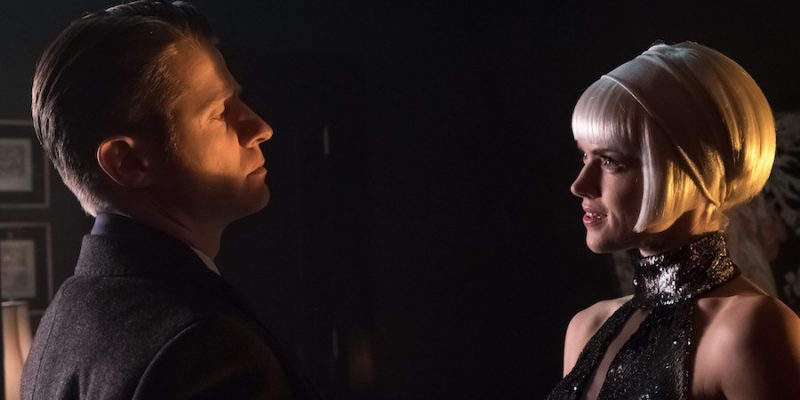 … in action.  After a hiatus, show and personal, it’s time to rock!  There is a lot to talk about, especially since both episodes packed in so much for those mere two hours of Gotham bliss.  Here we go! 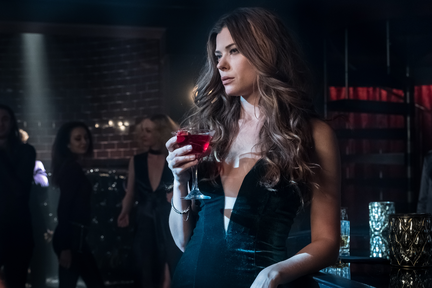 From seed to blossom:

I have to admit when I saw the casting news about Ivy I was decently annoyed.  This is the third iteration; was it really necessary to change actresses again?  The answer I had before March 1st was “no”, but Peyton List definitely convinced me to be a “yes”.  We have, for the first time on Gotham, a true Poison Ivy. Gone are the days of the meek and dim-witted and here are the days of strength and seduction.  I guess the writers were just finding their real stride with her and they had to go through big changes to get there.  Maybe I’m wrong though, they might have planed this whole transformation from the beginning.  Who knows! Regardless, I am happy with the way her character is growing now.

I do like the nod to the past Batman Easter-Eggs they sprinkled throughout Episode 413: “A Beautiful Darkness”.  I couldn’t help but sing “kiss from a rose on the grave” when Ivy gave Bruce the poison in a kiss.  There were so many good ones while he was hallucinating too!  Jim and his mustache made me laugh instantly.  I loved that Bruce told him about it too.  Plus, Jim and Barbara ending up together makes sense when it comes to future names.  That is, unless Jim decides to name his daughter after an estranged ex in Gotham’s universe, but that’d be weird.  And Heavens help me if I ever make it through a review without gushing about Robin Lord Taylor and seeing him as The Penguin with top hat and all just made me so excited, I really want him to rock the monocle soon. Could he be any more perfect? (More gushing to come later).

It’s so cute that Alfred was the one to save Bruce.  Alfred really kicked ass at the beginning of the mid-season premier.  He defended his name and then saved a bunch of people.  He’s so cool!  I will say I hate seeing Alfred in the slums and that whole story line with the waitress was just weird.  I mean, I understand that they had to show how chivalrous he is but did they have to kill the girl in the process?  Maybe that will lead to some big hangup Alfred has later on in the series.

Bruce and Alfred both went through drastic changes over the past few episodes.  With Alfred’s new life taking care of Harvey (whose cameo in the dream sequence was weird) I wonder if he’s going to want to go back to Bruce.  Bruce, who has deserved a good punch in the face for a few episodes now, finally got his wake up call and realizes he can fight this.  He can push the fear Ra’s Al Ghul brought into him out and emerge stronger and better!  He can emerge as Batman!  Speaking of Ra’s Al Ghul, I wonder what the Lazarus Water falling into Ivy’s hands means for Gotham.  Will this be how Ra’s Al Ghul returns? 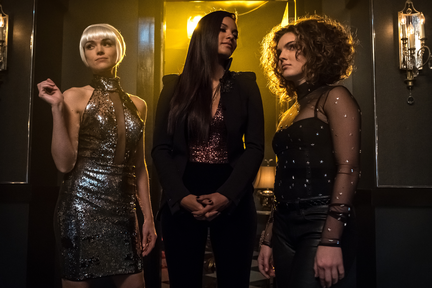 Barbara went from my least favorite character on the show to one of my favorites.  She really came into her role and finally holds all of the cards.  I know she’s been strong for most of this season, but I really like that she is now in cahoots with Sofia.  In my opinion, Barbara is the only one who can bring Sofia down.  Especially since she MAY be the Demon’s Head.  She has nothing holding her back; she’s ruthless and doesn’t care how dirty her hands get.

We’ve seen that Barbara has no loyalty but to herself.  What Sofia wants with her we have yet to find out, but I can almost guarantee that is going to end in a big face off.  Going back to the Demon’s Head speculation I have going, I’m thinking Barbara may want to bring Ra’s Al Ghul back.  If Barbara’s ultimate goal, at the moment, is to do that, then the Lazarus Water would definitely do the trick.  She just has to lure Ivy in and take that from her.  Easy peasy!

Check out part two of my ramblings where I discuss Lee, Penguin, and Jerome’s power struggle for Gotham HERE!