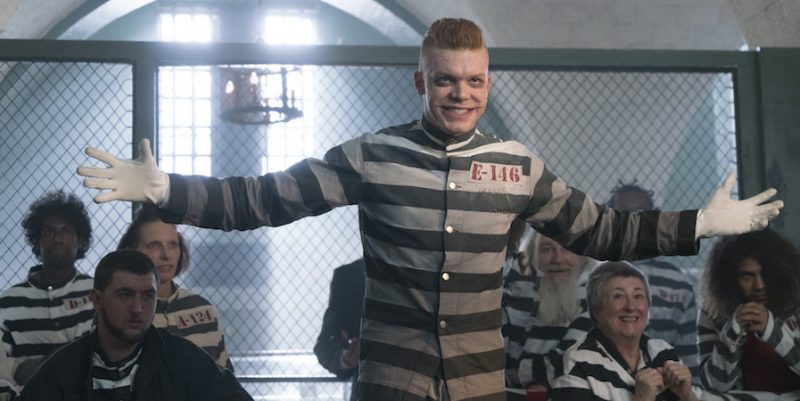 To part 2 of my Mid-Season premier ranting and raving, if you haven’t read part 1 do so here! I discuss Ivy and Bruce, Easter-Eggs, and Barbara being the head of the Gotham City Sirens and maybe even the Demon’s Head.

Speaking of, the rest of the Sirens seem to be doing well.  The club seems to be popping, no thanks to that super creepy commercial though! Anyone else think that was just weird?  Especially Selina’s line!  I’m sure she was forced into it.  However, Selina seems content riding a few coattails to lay low and gain some wealth and notability.  She got caught up with Ivy and discovered that she was nothing like how she used to be.  I love that they show that Selina has a line she doesn’t cross no matter what the situation. Tabitha got Butch back, but not before she beat the crap out of him to try to get him to remember. Hey, tough love right? 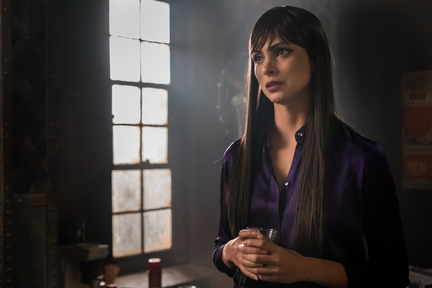 I’m happy Butch is back to normal, but what’s going to happen to Grundy being the powerhouse for The Narrows?!  Speaking of The Narrows, what will Lee do now that Grundy is gone and The Riddler is trying to kill her?  We only saw a bit of her in the first episode, but her appearance is weird.  I don’t mean the way she looked, I mean the way she acted.  The speech she gave felt off and forced.

The Doc Can Fix It!

First, why would anyone in The Narrows give two craps about this outsider lady?  Second, why would anyone in The Narrows LISTEN to this outsider lady.  From the small amount we’ve seen of this community, they do not seem like the kinds of people to just change their ways.  There was a whole episode about Narrows loyalty last half of season four, right?  I’m not saying they would never change, I’m just saying I think it’s strange how drastically it happened.  Maybe Lee symbolizes hope for them, but they really haven’t shown that compassion from them yet.

I did like how they brought Jim around to find out who “The Doc” was.  It’s exciting to think that he and Lee have a possibility to get back together, but I’m worried what Sofia is going to do to her!  I forget that they’ve met before, especially since Lee was going to marry Mario.  How much has happened the past season is crazy! 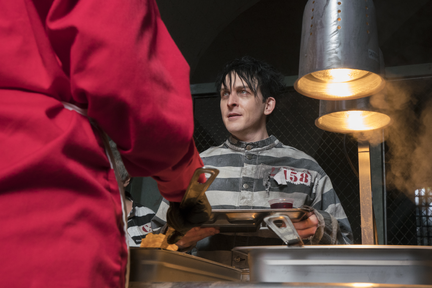 The king of nothing

The whole beginning sequence of Episode 412 was well done.  Showing each character’s story and then bringing it all together when the bomb went off.  Just brilliant writing. The bomb leads us to my next big squee.  Nygma!  Who would have thunk that The Riddler is trapped deep inside him just waiting to come out to play!  I gasped when they showed his reflection in the mirror, such a great call-back!  Nygma doesn’t realize how much control Riddler really does have over him, which they show when he visits Penguin in Arkham.  Nygma thinks that he’s just come to brag and rub his freedom and success in Penguin’s face, but Penguin knows better.  I wonder how The Riddler will help Penguin break free.

Oh Penguin.  How far he’s fallen.  Locked away in a madhouse surrounded by lessers.  It makes me sad!  He was helpless and had basically written himself off.  I think the visit from Nygma may have boosted some sort of hope in him.  Not to mention the tireless beatings he seems to be getting from Jerome’s goons are probably fueling his anger.  I know this is a small dip on the rollercoaster of Penguin, but I hope he gets out of it soon.  If he uses his wit he can completely pull the wool over Jerome’s eyes and get himself out and back up on top. 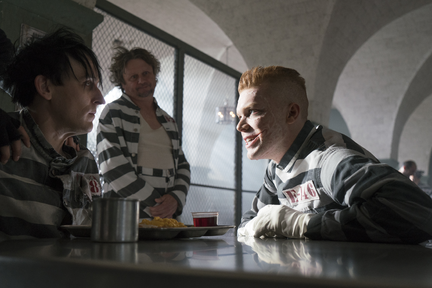 As much as I love Penguin, I have to argue that Jerome is the greatest villain on Gotham.  He not only goes against the good, he goes against the bad!  His crazy is on a whole new level and I don’t understand how this is NOT the Joker. (Read why I say that here).  Every thing they’re doing with him points that way.  The face, the voice, the playing card!  They really have to do something drastic and crazy to get me on board for the “other Joker”.  Maybe it’ll be a reincarnation thing again?  Maybe Jerome will completely die and only the Joker will be left?

Cameron Monaghan is absolutely killing this role too, they could not have chosen a better actor for this!  It was so fun to watch when he and Robin Lord Taylor were having the Mime-off.  The chops on both actors showed and you could genuinely see how much fun they were having.  Penguin and Jerome are foes right now, and I can’t wait to see how much the pair will work together and against each other in the future.

All in all, the mid-season premier of Gotham was spot on.  Both episodes that have aired have really packed in a lot of story and depth to all of our characters.  We know that every single one of them is out for their own well-being, but also they all simultaneously care about Gotham and what happens to it.  I’m excited and admittedly nervous for what’s to come.  The death of Falcone really seemed to tip the ball in Sofia’s court, but now that she and Lee are working together AND she and Barbara are working together, the struggle for power is going to come to a head very soon.

For more Gotham be sure to stay tuned to Three If By Space!