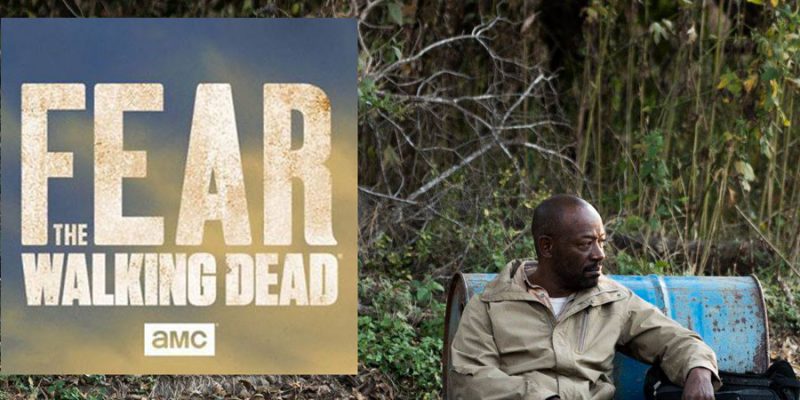 No one really knew what to make of it when the plan was announced. I didn’t like it. Why choose Morgan? Many fans felt put off over the idea. It wouldn’t work. How could it work? Let me tell you that I was amazed at how good it felt, and great it worked! It went seamlessly in my opinion and now I wonder why there was ever a fuss about it.

Starting out with the new character John Dorie was a little strange. He is this cowboy, out alone in the woods, Hearing a noise he starts talking to himself. Alot. Seems as though he hasn’t spoken out loud in quite some time, and it was quite the chat. When the noise turns out to be a walker, he fires his pistol, kills it and low and behold, there is Morgan standing behind it! 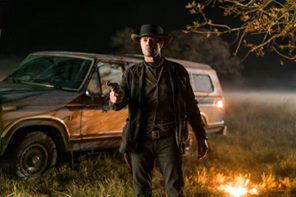 Flash backwards to after the all out war in Walking Dead.We see that Morgan has to get away from people. He is broken and he knows it. He shows up at the Heapster’s dump. He tells Jadis that he needs to be alone there. She leaves. Morgan attempts to make a life there. But he starts receiving some apparently unwanted visitors. Jesus, Carol and Rick, all come to visit. One by one they try to talk him into coming back. He won’t have it. He needs alone time. He needs to get right.

He packs up and leaves the dump. It seems as though it takes him at least 6 to 7 months of traveling .Then he is in Texas. This is where he meets John Dorie. After chatting it up with John, he stays the night at his camp, but leaves before sunrise. When Morgan finds a camp set up, he is suddenly knocked out by someone. There are bad people out there. John finds him and tries to intervene but is also captured by the bad people.

Enter Althea, also a new character. Known as Al, this girl is a badass in a SWAT truck. She helps Morgan and john from their tight spot. It seems she knows the goons and does what she can to get Morgan and John safe. But now they owe her…Al is a journalist and wants to interview them. She wants to know who they are and what their stories are. 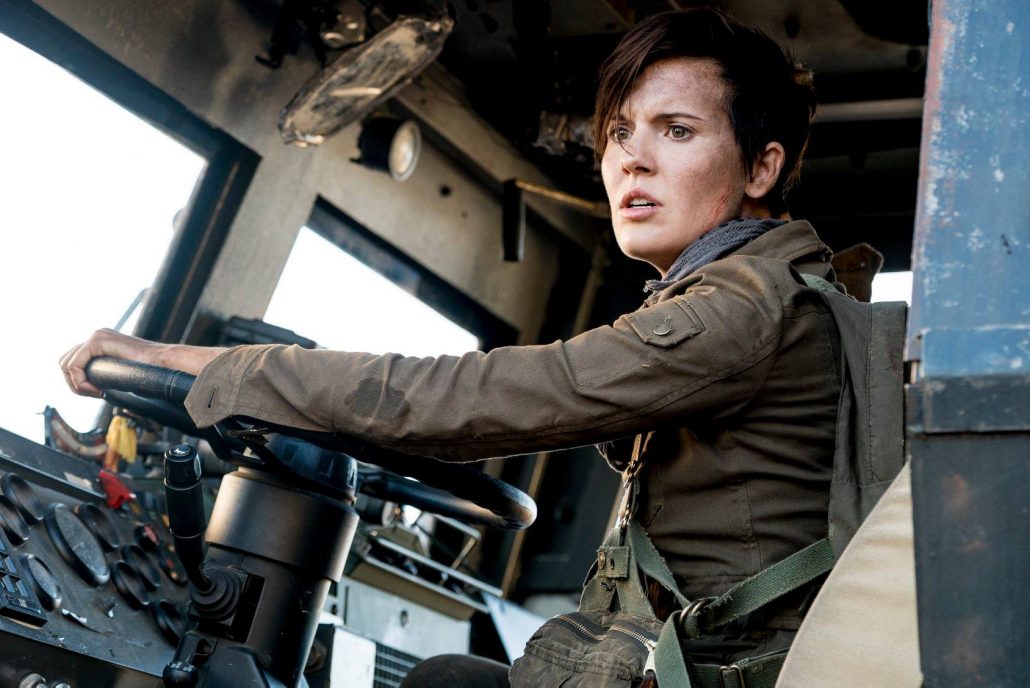 When they travel to a trailer park for the night, Al interviews John. He has a strange story. He is looking for a woman, Laura. She has the exact same pistol as his. There is probably some very interesting story here. I can’t wait to find out what it is. 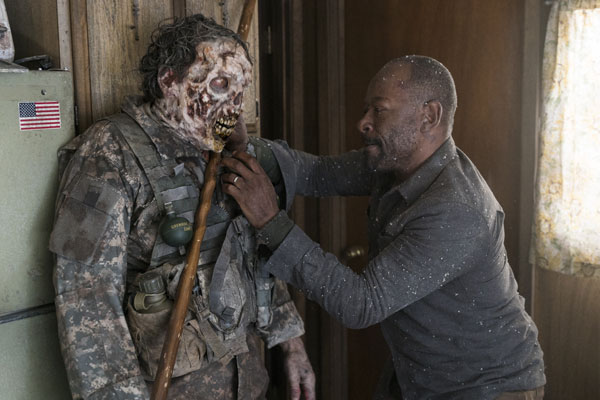 Morgan wants to go off on his own. He needs his space. The bad guys decide to attack and take all of the stuff that they can. There is quite a nice little battle. Then the walkers show up, and we are treated to some great walker kills. Fighting the living, and the dead can get quite interesting. Morgan blows one up with a grenade and during the fight with the living, gets shot in the leg. He is hurting, but ok. He tells All a little about being with a good group back in Alexandria. He tells her there was a war and that they won. She doesn’t understand why he would leave if it was good. He tells her,”I lose people, I lose myself”. 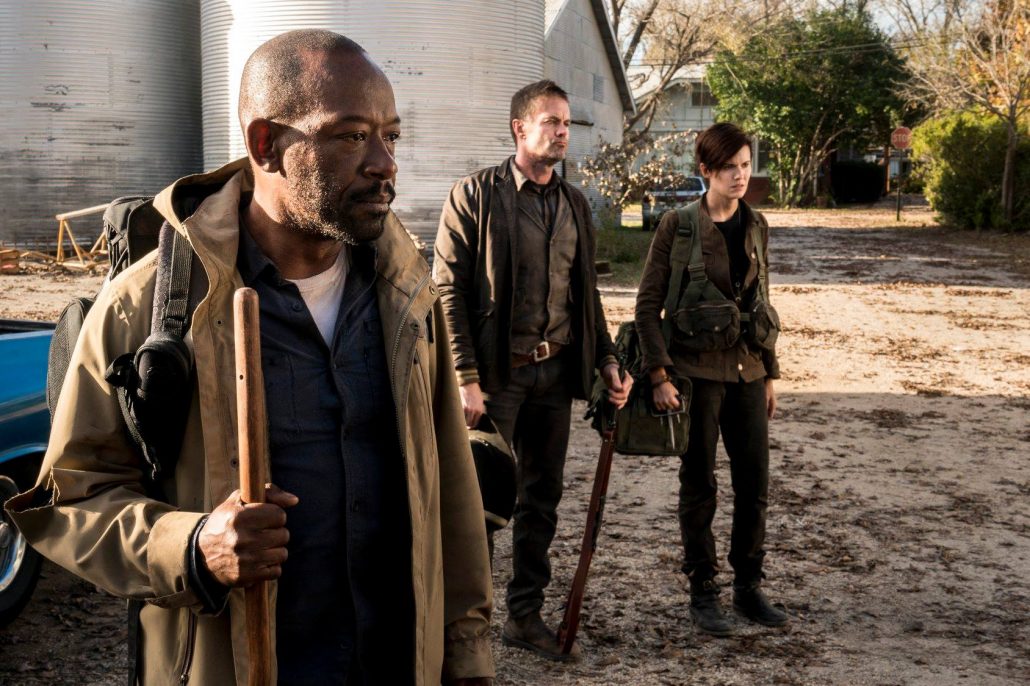 Morgan sets off by himself again. On the way down the road, he is approached by walkers, and trips and because of his injured leg, trips and falls. Again, John shows up to save the day. 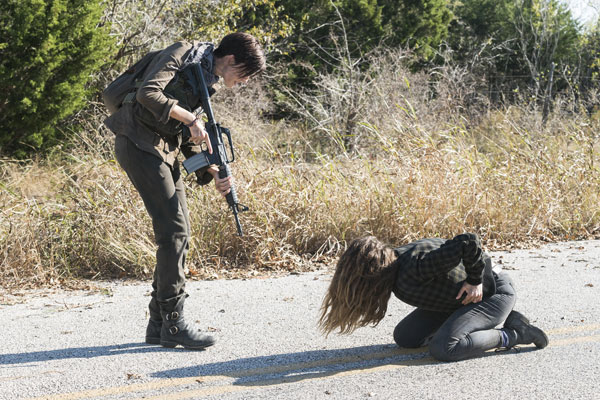 Morgan agrees to travel with Al and John until his leg heals , and they go off down the road. When they see a girl in the middle of the road crying, they stop to help. Wary and concerned they approach her as she yells out about “bad people” out here. As Morgan approaches with the first aid kit from the truck, the girl springs up with a rifle. It is Alicia!. Strand, Nick and Lucy come up from the ditch. They are all armed! Morgan , John and Al are taken prisoner. 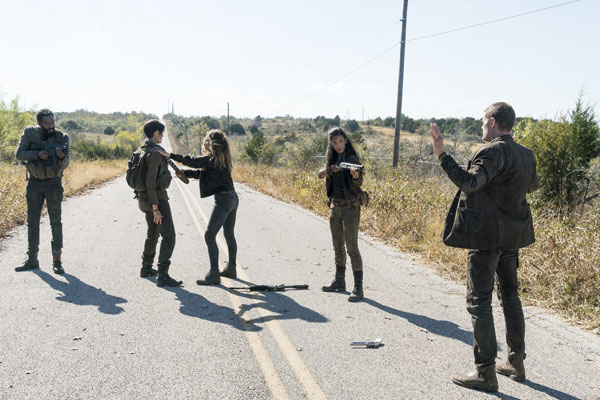 This crossover episode of Morgan was fantastic! I thought it would suck. I was wrong. The way that they showed his living at the dump, getting the visits from Walking Dead characters, his journey, leaving the east, traveling west to Texas. It all makes sense. I don’t think any of it seemed forced. It flowed smoothly and in reality, Morgan is a good choice for this crossover. I can’t wait to see what more he will bring to Fear. I hope you are as excited as I am.

Watch Season 4 of Fear The Walking Dead on AMC, Sundays at 8PM Central