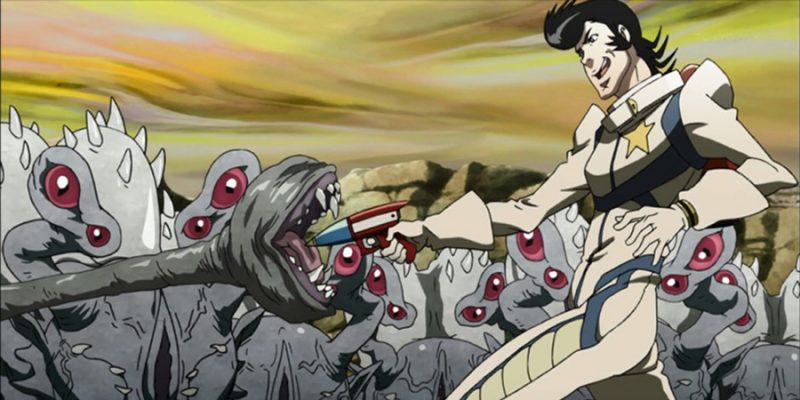 Space Dandy feels like a throw-back. No, not like throw it back, like something out of another time. The bright colors, the music, and especially the main character, the titular Space Dandy, all remind me of a time when adventures didn’t have to make total sense and political correctness wasn’t really a thing yet. Case in point, Dandy’s first word is, “Boobies,” and his entire first monologue laments mankind’s obsession with them. But only because other body parts deserve more attention (a position later reversed).

Unlikely as it sounds, Dandy fancies himself an alien hunter. Not a game hunter, no, Dandy is in it for discovery of new alien species. After all. it pays better than other kinds of bounty hunting. He and the crew of the Aloha Oe, a sentient vacuum named QT and a space cat they call Mew, travel all over the galaxy searching for species people have heard of, but haven’t been formally cataloged. That sounds like no big deal, but they make every episode unique and exciting. Star Trek this is not. 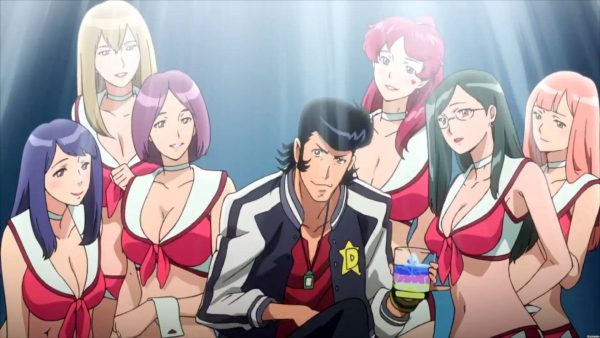 The character models shine for some and leave you wanting with others. The designs for multitude of fan-service girls exude a lot of care from a lifetime of observation on the part of the artists. Dandy himself both in look and personality, combines Elvis Presley, Zap Brannigan, and Han Solo. While Dandy may come off inept or silly at times, he often does possess the skill needed to save the day (or at least their skins). This makes him very watchable because you never know which Dandy you’ll get.

The mysterious Dr. Gel constantly chasing Dandy reeks of that tendency for anime to just start throwing mismatched pieces together. His spacecraft reflects the same hodgepodge approach design being the Statue of Liberty’s head with some thrusters and guns attached. All in all, very minor quibbles given how much I liked the overall product.

Included on the Blu-ray, you’ll find a behind the scenes featurette with the English speaking voice actors and ADR team. After watching it, you should get the sense of the level of care and dedication put into the translation. They knew they had something good and wanted to make sure they kept it good, if that makes sense.

Another interesting factor: Watanabe hired different directors for the various episodes. In so doing, he also allowed them all the creative freedom they wanted to play with, well, almost anything they wanted. Music, animation style, drawing style, the inclusion of a laugh-track… All things that can change from episode to episode. This doesn’t come out as disjointed as it sounds, though. 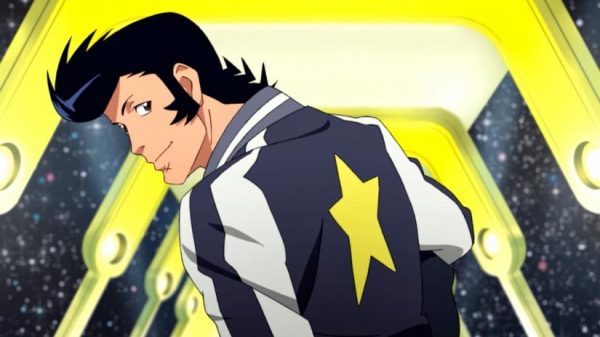 If you like to watch anime with a strong, episode-to-episode serialization, Space Dandy may not work for you. Certain elements, such as the ominous Gogol fleet tracking Dandy’s whereabouts, carry on from episode to episode. Other events, like the deaths of all the main characters, get reset at the beginning of the next episode. You might say, well, maybe they justify it somehow. No, they just move on without saying anything about how everyone came back to life.

Try not to take my comments here as reasons not to watch Space Dandy. I found each episode charming and would definitely re-watch this series if given the chance. Give it a shot.