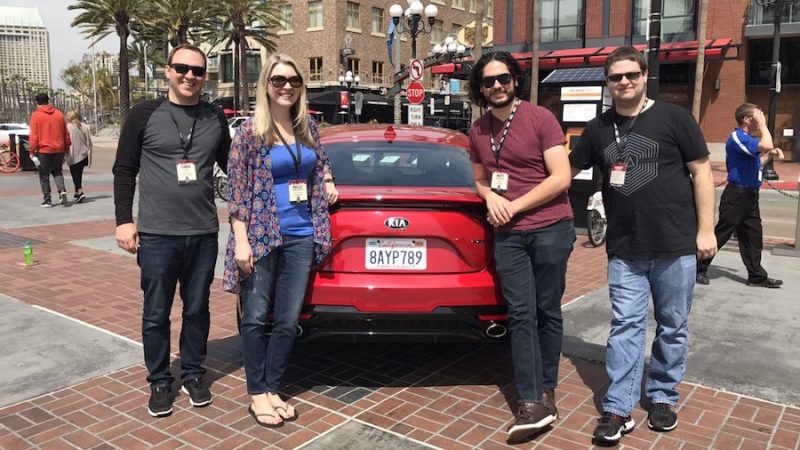 Home » Writers Corner » The Kia Brand Experience – How Does The Stinger Rate?

This week I was flown out to San Diego courtesy of Kia as a social influencer to take part in a brand immersion event. Over the 2 day event, we explored Kia’s history and its future. We also got to drive some of their newest cars around San Diego. Below are my thoughts on the new Kia Stinger, the Kia brand and how it rates to my current car, a 2013 Mitsubishi Evo. 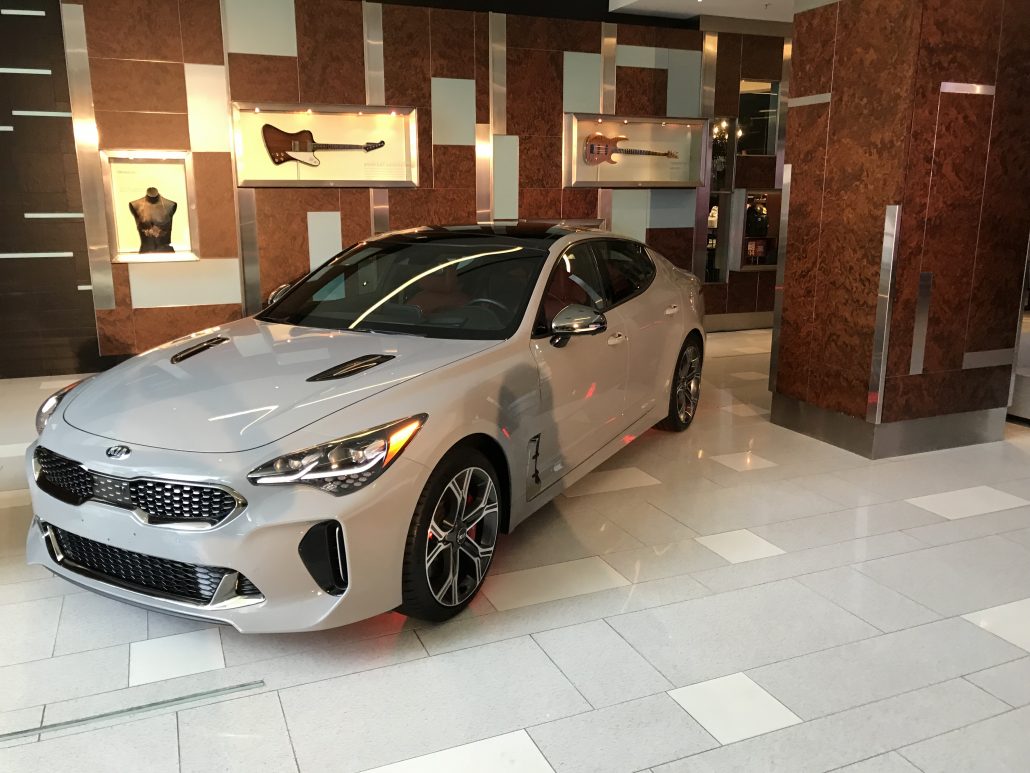 More and more companies are starting to realize the importance of working with social influencers. It is not that the brand cannot reach the same people but the Brand has an agenda in the mind of a consumer, to sell more product. Social influencers have agendas too but unlike a company they are people just like you and I. That means their experiences end up being relatable. When that happens we start to look at the brand and how we might interact with their product.

Before today’s event I rarely gave Kia much thought with regards to cars. It wasn’t because of anything they did. It was simply they were never on my radar. That wasn’t until one of their Brand Ambassadors, Emma Loggins with FanBolt, started talking about her experiences with Kia that I began to look at Kia. As I began to learn more about what Kia was doing, I started to become more interested in their brand. As a brand ambassador, Mrs. Loggins introduced me to the Kia social influencer team and I was flown down to San Diego to experience it myself. 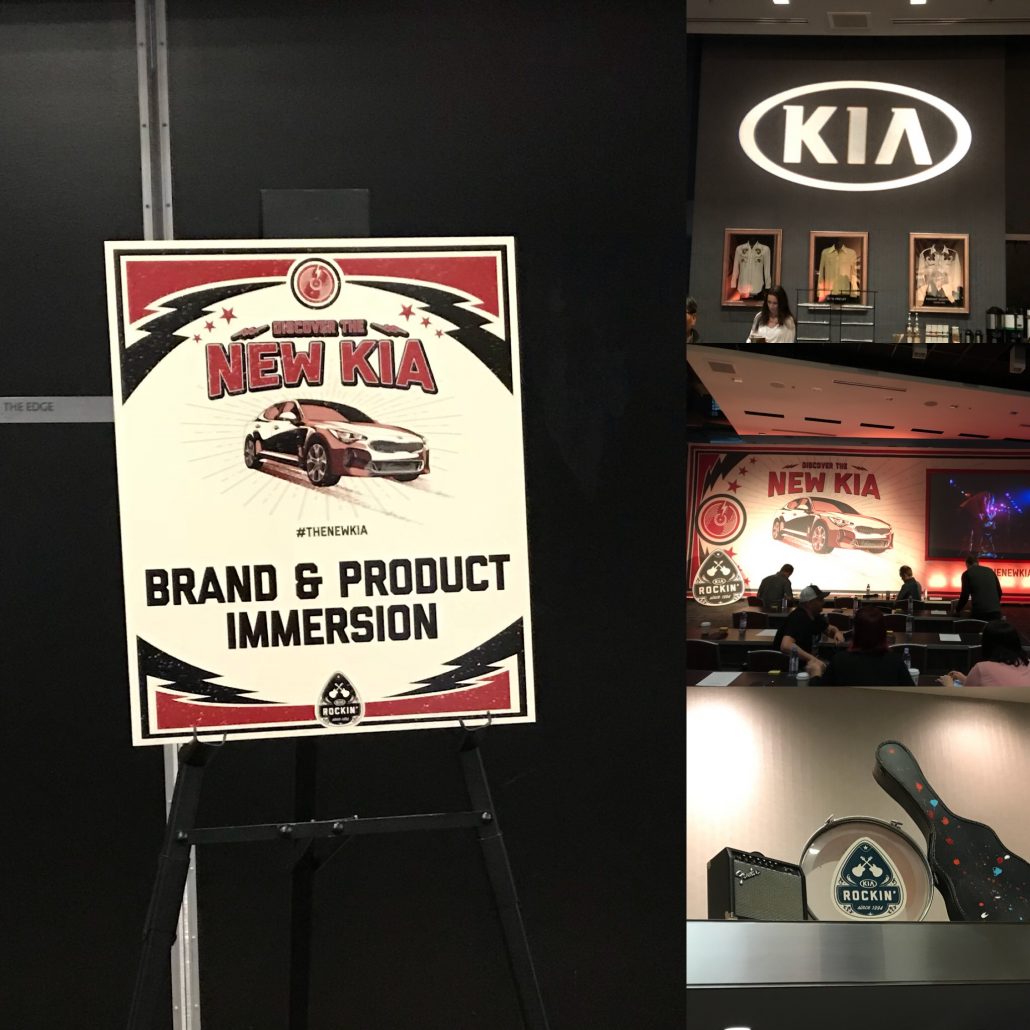 As discussed above, Kia has made a conscious effort to revamp their image. The event they hosted was one of a kind for me. From hosting meet and greets with other influencers, driving vehicles all around the city, to karaoke night they made sure we enjoyed the event. But that wasn’t the only commitment they made. The people behind the engineering, design and marketing of their new cars were there, with us and willing to answer all our questions about their new line of cars. Whether it was why they went a certain direction, or to ask if we felt there was anything that they could do better.

During this process I also met so many new people from all different areas of the social media world. Be it mommy or daddy bloggers to travel and entertainment bloggers. We all had fun creating goofy videos, challenging each other to singing battles and bonded over our different perspectives on brand experience. Every persons choice of vehicle was based on their life needs and personal choices. For me the Stinger was the car that caught my attention.

Any brand can throw money at social media personalities and get them to promote their product. Kia takes a different approach. They bring you in and have you experience their product and ask you for honest feedback. And this is mine. 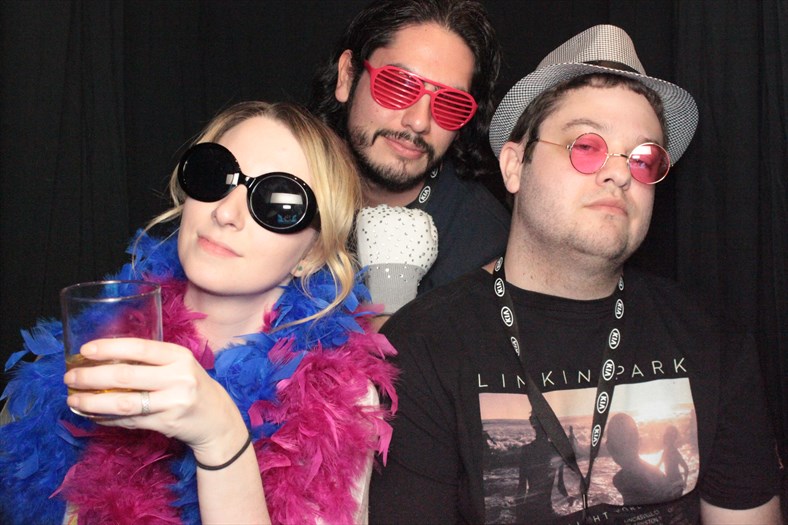 Kia was honest about the fact that nobody looked at them as a brand to care about in the beginning. In 1994 when they released their first 2 cars, zero press showed up to cover that event. Director of Corporate Communications James Bell went on to talk about what the Kia brand is about. Kia took the approach of music to its brand. Music is fun, good for you, and fueled by youth. Kia wants to be the same.

When it came to initial quality studies, Kia was ranked at the bottom when it first started. They knew they needed to fix that.

Investment In The Future

Since 2002, Kia has invested $2.5 billion in North America. Currently 40% of the vehicles they sell in the US are made right here. The West Point plant has created 14,000 jobs alone. Kia is also heavily investing in green cars and autonomous driving technology. Going into 2020, Kia plans to spend $12 billion in these areas. Testing of autonomous cars is already underway in Nevada. They also have a goal of reducing emissions by 25% by 2020. 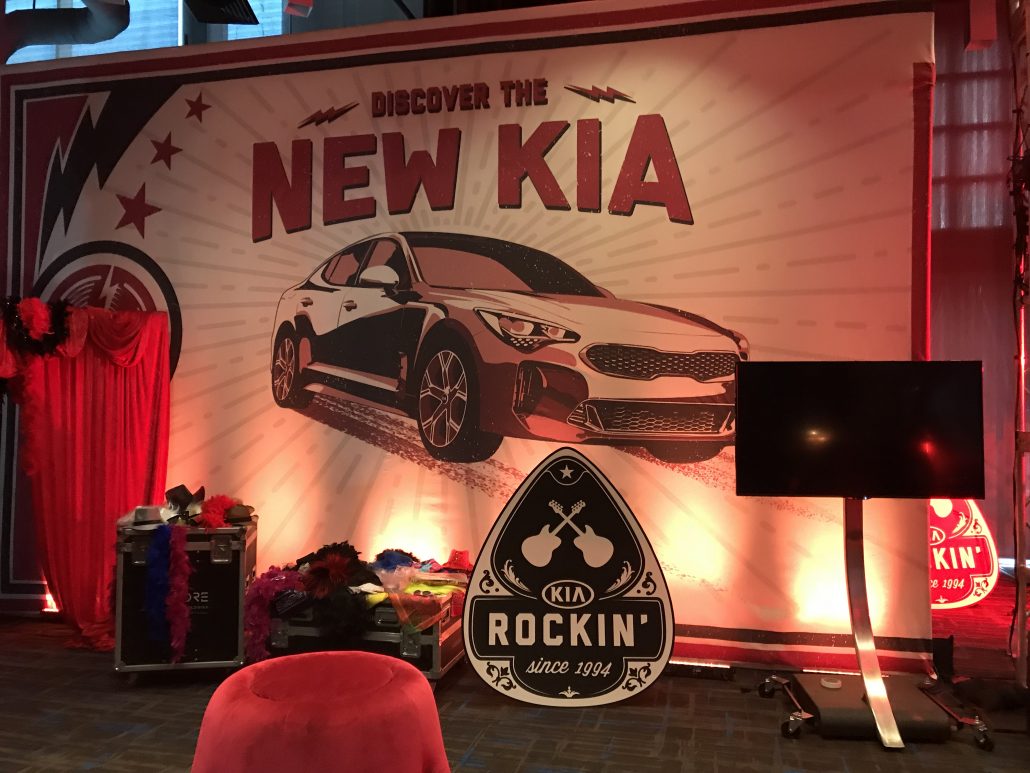 After bringing in new design experts from Germany, the brand reinvented its image and its cars. First lets start with quality. Kia has no ranked #1 in JD Powers initial quality study for 2 years. Consumer Reports ranks Kia top 3 in reliability, with the Niro being the most reliable vehicle on the market.

Albert Biermann was brought in to look at the brand image and help fix it. He quickly realized their designs were not consistent across each model to provide Kia with a brand identity. That is where the “Tiger Nose” grill design came into play. That is now the signature look of the Kia brand across its cars. 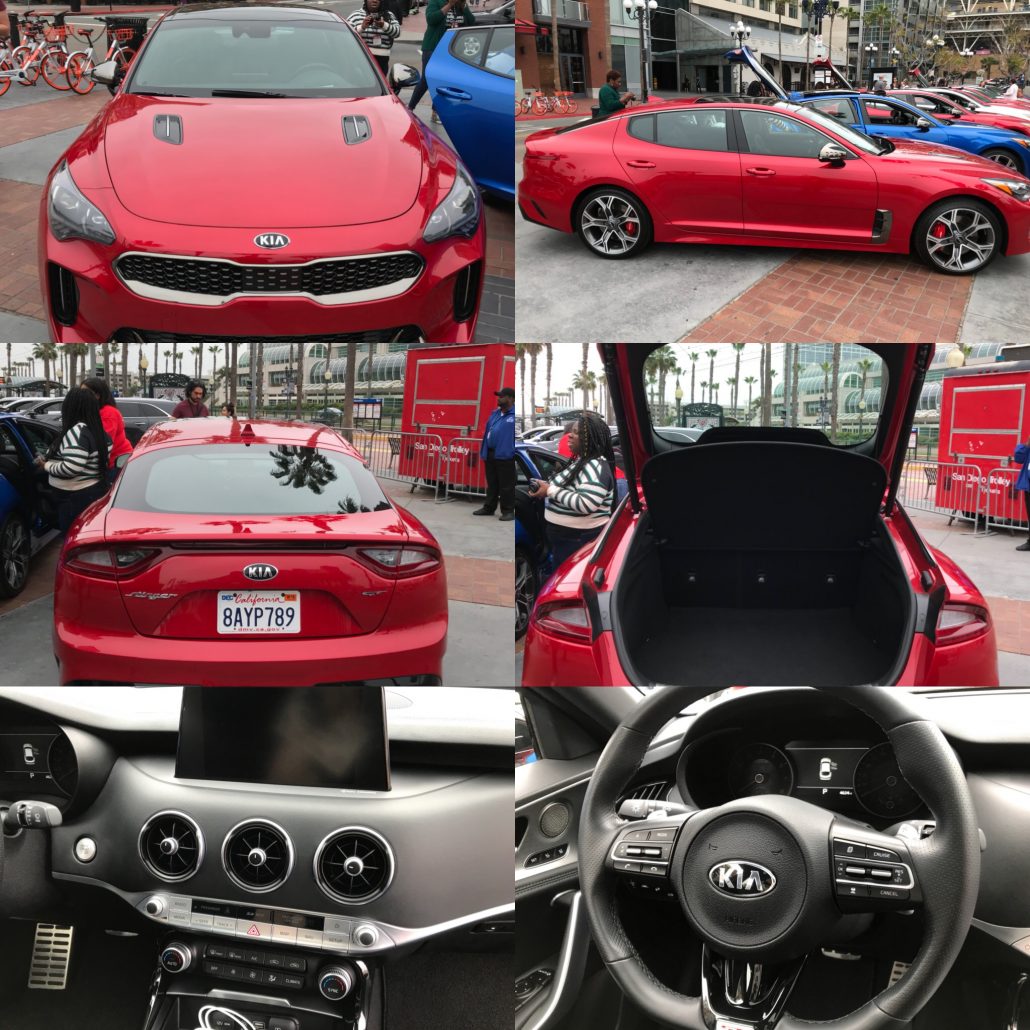 On the second day of our brand experience event in San Diego, Kia provided us with over a dozen vehicles to test drive around the city and experience what Kia had to offer. We were setup in teams, with 4 of us in each team to test drive and explore the city. Our team picked the 2018 Kia Stinger. I have to say that being handed the keys to this car and told to take a tour of the city was nothing short of exciting.

First we took the scenic route to the Krispy Kreme donut shop then, we took the long way back and drove through Coronado Island. Once we had lunch back in downtown, we headed out and visited Mission Basilica De Alcala. It was an incredible experience exploring the city and driving the Stinger. What made it even more fun was the sound system. The Stinger brings with it a 15-speaker, 720 Watt Harman-Kardon audio system. We rocked out with that sound system as we drove, and did our lip sync video. You will see more of that later!

So the question now is how does the Stinger hold up? I drive a fairly sporty car now, so I thought it would be interesting to compare my current car with Kia’s newest sports vehicle.

Comparing The Mitsubishi Evo to the Kia Stinger

Having had this car for 5 years I have put some miles on it and had no issues from a reliability stand point. Road noise is an issue with this car. Although Mitsubishi put a lot into the power of the car, they didn’t pay any attention to road noise. It’s so bad on the highway that hands free is all but pointless to use.

The breaking system and all wheel drive are awesome and great for getting up to speed on the highway quickly and being nimble when needing to stop suddenly. The sound system is decent, with adjustment settings to the sub and speakers to give it some kick when you want it. Technology wise, the car is severely lacking. The only USB ports to speak of is in the glove box. That’s right, the glove box. Connectivity with bluetooth is very limited. Apple CarPlay and Android Auto do not come with the Evo. 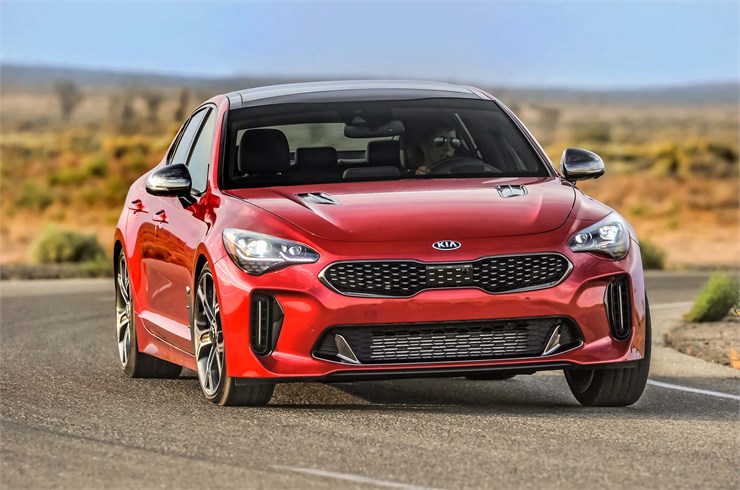 The first thing I noticed with this car versus the Evo was road noise. There was none. Kia spent some time to work on the interior to silence road noise which made driving the car much more appealing. The Brembo brakes were a familiar feel and had all the stopping power I have come to expect from them. With the quieter inside all 4 of us in the car were able to talk to each other without yelling. Or even better, turn up the 15-speaker sound system to jam out while we took a tour of the city. The Harman-Kardon audio system out performs the Rockford-Fosgate system in the Evo, hands down. That may partially be due to the lack of attention to road noise in the Evo design but the Stinger also has more speakers overall.

Technology is at the forefront of the design as well. The car is far more enabled for the current technology then the Evo. First it supports Apple CarPlay and Android Auto which makes connecting your phone and playing music far quicker. You also have a detailed GUI on the nav screen to pick your songs, play list and other apps. The car features several easy to access USB ports both for connecting your music devices and phones but for charging as well.

Another cool feature is the heads up display. The Stinger actively shows you your current speed and the speed limit sign next to it right on the windshield eliminating the need to look down at the instrument panel and reducing distractions. It caught me off guard at first but I grew to love it by the time I finished my test drive. 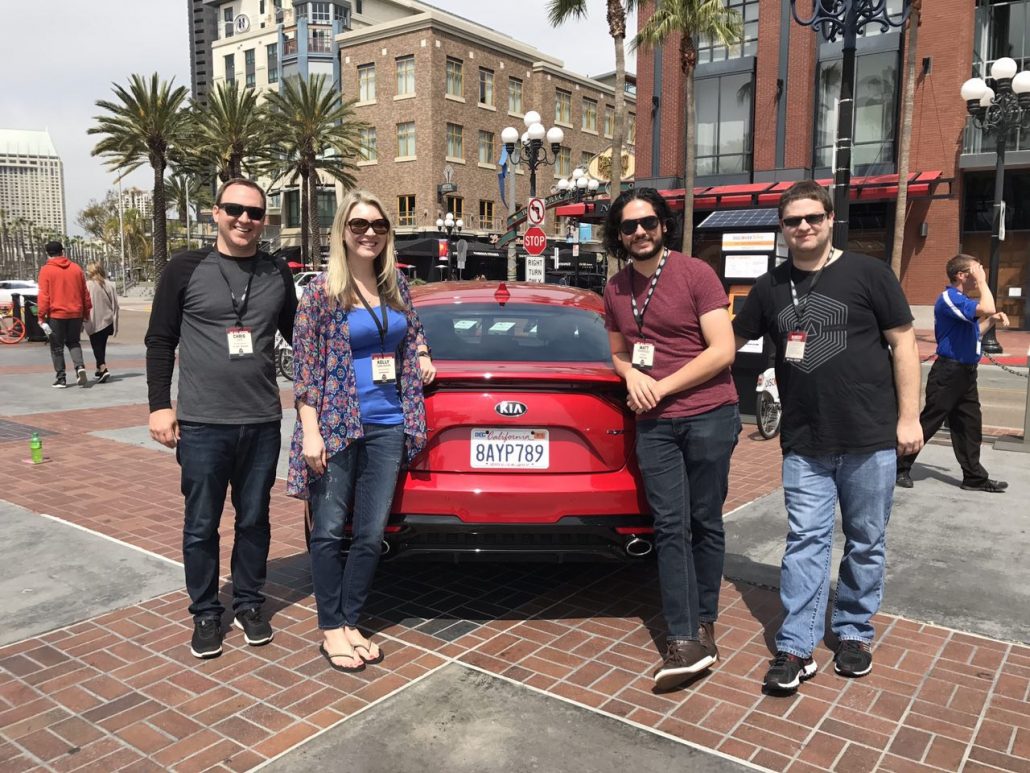 When it comes to a verdict on the Kia Stinger versus the Mitsubishi Evo, the answer as a 5-year owner of an Evo is: The Stinger wins. Unlike the Evo, The Stinger didn’t stop at raw power and handling. Kia made sure that the ride itself was enjoyable by focusing on comfort, technology and function inside the car itself. There just isn’t any way around it. More horsepower, better fuel economy, more technology and better function inside.

When it comes to Kia as a brand, they have really stepped up the game when it comes to connecting with their customer. The brand has an identity now and its making sure that it lives by it in every way, including the executives on the team. #TheNewKia is more than just a trending topic, it’s a mantra that the Kia team works to. The people I met, interacted with and talked to all had varying reasons and input for enjoying the Kia brand. What was most important about the entire event, was the fact that Kia executives were there, and listened.

A brand that up until a few months ago was never on my radar, is now my next brand of car that I plan to own. Why? Because other social media influencers I know and trust were talking about the brand, and shared their experiences (good and bad). Also because Kia went beyond simply flying us out there to check out their brand. They sat us down, and asked, what could we do better?

To catch-all the fun we had in San Diego be sure to check out my instagram page to see more photos and videos from the event.

So as mentioned above, we did a contest with other teams to come up with a lip sync video while doing our test drive. Our team consisted of Matt Rodriguez of ShakeFire, Kelly Tomlinson of LiveLoveTexas.com and Chris Cate of The Parent Normal. We didn’t win but we had a lot of fun producing this video, so check it out and let us know if you caught the move reference!

Note: Kia compensated me for travel to experience this event. All thoughts and opinions are my own.