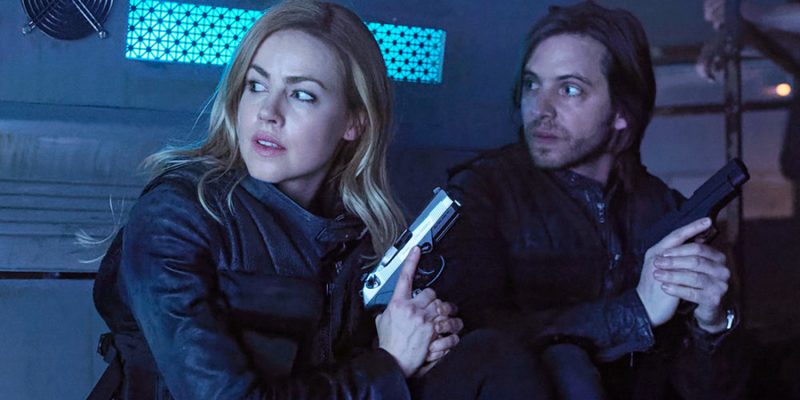 Unlike last year’s binge experience, I split this season’s reviews into individual episodes. Makes for more clicking, but shorter reads. Let’s quit wasting time and get on with 12 Monkeys episode 401: The End!

Remember how last season ended? Yeah lots of action, but there was one stand-alone scene at the very end. In it, a young James Cole listened to his father tell him a story about a forward-only travelling serpent. Cole’s father credited James’ mother as its author. Whoa. This episode starts with the same story, except it’s described as a legend by its narrator. We don’t know much about Mama Cole, but we know she’s a plagiarist. She might also be a member of a sect of Primaries dating back to the Game of Thrones era. You noticed the High Sparrow (Jonathan Pryce) as the Primary cult leader, right? Typecast, much? Anyway, the opening scene suggests that Cole (Aaron Stanford) has been important for a very long time.

Cassie (Amanda Schull) had the most trouble letting bygones be bygones, as demonstrated by her half-hearted attempt to save Jones’ life. She eventually saves Jones, but probably because Hannah stood right in front of her, not because she felt she owed it to Jones. Deacon (Todd Stashwick) and Cole fare much better as Deacon easily accepts Cole’s declaration that Athan (James Callis) never was the Witness. The proof is in the pudding when Titan arrives with Olivia (Alisen Down), the Once and Future Witness at the helm. This shortened timescale and a broken cooling system jeopardized Team Splinter’s escape plans in a pretty major way. Now they have to focus on saving as many as they can, all at once. Hence, Project Charon. Or Project Mini-Titan.

When Jones’ told Lasky (Murray Furrow) she always knew Titan would find them, I was like, “What?” If Titan’s arrival was such a certainty, why had Project Charon languished? Never mind though, we’ve got repeaters to position.

Did anyone think Mallick (Faran Tahir) would survive Athan’s grenade? Not me. But, there he was, scarred and half blind. If you think about it, they have a time machine. The Army of the 12 Monkeys probably waited around for six months for things to settle down and to give time for their injured to recover. Then, they jumped to the exact point at which Team Splinter would be least prepared. Those darn Monkeys. At any rate, Cole and Deacon rush to create a Spartan-like defense at the building’s main entrance.

Even though Jennifer holds the show’s title as most complex hero, Deacon holds the distinction as most complicated. When we first me Deacon, he filled a villain’s role. Now, he volunteers to run a solo mission to cause a gigantic distraction within Titan itself. Although exploding the base of a huge smokestack to make it fall into the hear of Titan looked spectacular, it really just made Olivia mad. That’s when our complicated Deacon gets this episode’s best line: “Olivia’s got herself a Death Star!” I continue to love the 80’s references.

Despite their valiant efforts, the Army of 12 Monkeys outnumbers Team Splinter by about 100 to 1. They breach the defenses, killing Lasky and mortally wounding Whitley (Demore Barnes). Whitley stood his ground with the honor he’d shown for the last four season, protecting Jones while she brought the power core back on line. Too bad she had to dose herself with lethal radiation to do it. If I ever have the misfortune to be around lethal radiation, will it make the air orange and ripply, so at least I know what it is?

Hannah, guided by her mother via walkie-talkie,initiates Splinter HQ’s last splinter sequence, a move in space, but not time. Despite the heroism and no small amount of running, Deacon gets caught outside the perimeter and can’t cross into relative safety. “Don’t leave me,” he says just before Cole drags away an unbelieving Cassie. Although we saw the building fall on top of Deacon, I expect to see him back, soon. I have no idea how. I just thought, “He’s survived worse.” With the center of the building disappearing, the rest of it crumbles in on itself, as we saw it last season. Olivia might regret that premature proclamation of the end of their cycle though.

Technically, that would be it for most episodes of television. Showrunner Terry Matalas isn’t done with us yet though. 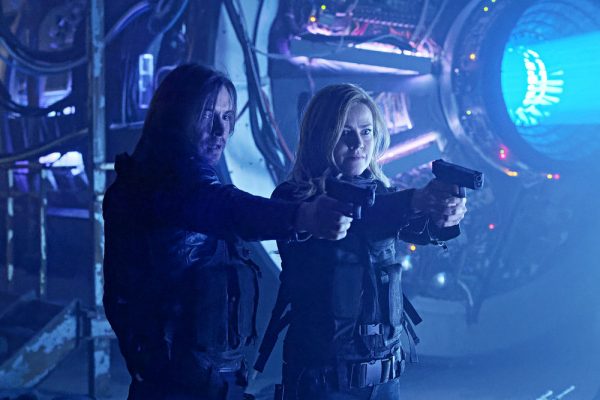 When Team Splinter emerges from their shattered building, with an injured Adler and Jones in tow, they find themselves in the ruins of the Emerson Hotel. A despondent Cassie utters, “This is us, going in circles…” Why is the Emerson Team Splinter’s nexus? The point in space they all return to?

Even though they’ve just had their butts kicked and no one wants to, the team forages for supplies and generators. Just like Back to the Future, their time machine has a power problems and backyard Honda generators aren’t going to cut it. Cole decides to go back to Raritan National Laboratories, the former home of Splinter HQ to find their back-up power cell.

Hannah (Brooke Williams) joins Cole’s solo mission and he finds Jones’ track record of only being mostly right still continues. She had intended to move the facility in space, but not in time. Half right. Otherwise, Cole wouldn’t have seen Ramse (Kirk Acevedo) and Younger Cole stroll by on their way to Splinter HQ WAY back at the beginning of the story. This makes that image of the Ouroboros found in Cole’s room at the Emerson start to resonate in your mind. Circles and loops are going to mean a LOT this season.

Jennifer (Emily Hampshire) has moved to Paris from London where she helped Athan recover last season. We finally get to see a little of what it’s like to be Jennifer Goines in her short segment. At first, we’re led to believe that maybe she’s talking to another version of herself. Perhaps another Jennifer from another time. We’ve seen it before with Old Jennifer and our Jennifer meeting in the future, so why not here? Why not? Because this second Jennifer is actually the real Jennifer. The Sydney Bristow (from Alias, remember?) version of Jennifer is all in her head. Although she manages to steal the Ouroboros, as we see through the eyes of a guard, it doesn’t really go down like she thinks it does. Her best line: “Don’t sweat it, Chuck E. Cheese.”

Too bad neither Jennifer knows what to do with the Ouroboros once they have it.