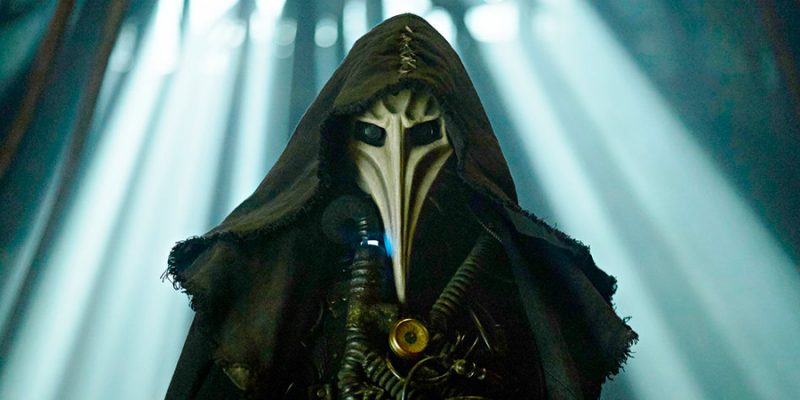 Cassie (Amanda Schull) goes straight-up T-800 this episode in which she decides to hunt down young Olivia. Unlike The Terminator, which also involved an unborn child and time travel, once she learns of the pending birth, her plan goes haywire. I loved the opening. The whole cutting between Olivia getting processed at the PD and Cassie prepping her weapons really worked. Matching it up with The Turtles’ (get it? Turtles?) “So Happy Together” reminds me why I like this show. Just enough whimsy to balance out the deadly seriousness of the rest of it.

Look back a couple reviews when I suggested much more time has passed for Titan residents than for our heroes. Enough time elapsed for Elder Monkeys to start grumbling about Olivia’s lack of Primariness. Olivia (Alisen Down) believes that primaries and paradoxing primaries (major plot last season) do not hold the key to opening the red forest. She doesn’t know what will do it yet, but she cant’s abide dissension in her ranks. Leave it to Messenger super DNA to be able to stab all the way through a person’s spine like that.

Frustrated With The Help

Speaking of dissension, Mallick (Faran Tahir) probably signed his own walking papers with that snotty, “The Witness has spoken,” bit. Too bad for Mallick another high ranking elder with a less dogmatic approach stuck around. Olivia still had a lot to work out this episode. Finding a new staff just fell into her lap, like, “Great. Now I’ve got to kill Mallick for smarting off to me AND find a replacement? Does anyone know how busy I am?”

She knows what she has to do to “maintain the cycle”. That’s Witness-speak for “do all the creepy stuff we saw the Witness do in past seasons.” Her problem lies with her younger self. The sudden insertion of Cassie into her memories seems to give her some doubts. It looks like she wasn’t sure what her younger self would do, but that would never be true. After all, she IS herself older and AFTER whatever went on with Cassie. Easy stuff to forget while watching though.

Back From the Dead

Monkey soldiers discover Deacon (Todd Stashwick)  alive, but buried in the ruin of Raritan. Never count out Deacon. He is one tough hombre. He shows it time and again that he will survive anything. But, his loyalties? Those may shift. Although Olivia starts to interrogate him, he beats her to the punch. His situation results from going soft, according to his own appraisal.

Just then, Mallick pipes up again, as if to say, “Remember me? Have you forgotten how much you want to kill me already?” He challenges her to use Witness powers to locate their enemies. Like she hasn’t thought of that before. Now, in addition to annoying her, he’s made her more powerful than he could have imagined.

What Would You Tell Your Younger Self?

Using the magic tea, Olivia finds herself in the Red Forest and the Cole’s old cabin. Inside the masked Witness unmasks herself and lays it all out for Olivia. Basically, once Olivia makes herself Primary, she will have Primary insight into… everything. How does one become Primary? Just like any supervillain, a little exposure to Titan’s beams should do the trick. One treatment may not do the whole trick, but it’s enough. She sees two major ideas during her Titan-blast: A great cycle is ending, and Titan isn’t being used for its true purpose.

With two very different men standing in front of her, Olivia decided her organization needed a change. Listening to Deacon state his devotion to finding Cole for his own purposes settles it. She’s just done listening to Mallick’s naysaying, despite his past loyalties. Olivia uses the same blade to create an opening in the Army of the 12 Monkeys (by killing Mallick) and then fill it (by freeing Deacon).

Olivia then continues to grow her Primary powers and sets into motion all the vile stuff we’ve seen the Witness do over the past four seasons. We knew that was coming though.

Cassie and Olivia the Younger

A clever Young Olivia (Holly Deveaux) manipulated the story as it unfolded in 1971. Cassie reported to us as honestly as she could about Olivia, but she was being fed bad information. After Cassie’s botched sniper attack, she get tossed in the jail cell next to Olivia. Why is Olivia there? I’m not clear on what law she was caught breaking. Her mother and 12 Monkeys goons chased her out of her flophouse, but they wouldn’t have been working with the cops that were waiting to scoop her up. Maybe she had priors.

Young Olivia feeds poor Cassie a version of her history meant to manipulate her. It works because even though Cassie managed to snatch Olivia’s arm through the bars, she didn’t take advantage and try to kill her. Granted, the Messenger DNA would have made the attempt laughable, but that would have spoiled the surprise, too. Once they connected as mother to almost-mother, Cassie lost the will to carry her plan out. Darn the ambiguity of just saying stuff like, “I don’t believe what she believes,”! I never counted on the idea that Mama Messenger would have turned her back on the Witness. But I’m getting ahead of myself.

The mom everyone loves to hate shows up after Olivia lays out partial retellings of her formative years. Getting branded, going to the Red Forest, the message from the Witness about sacrificing, we presumed, her baby… All partly true, just twisted to make it seem like Olivia was acting against her will. She can’t be too bad, because she springs Olivia after only a few hours in the cell. 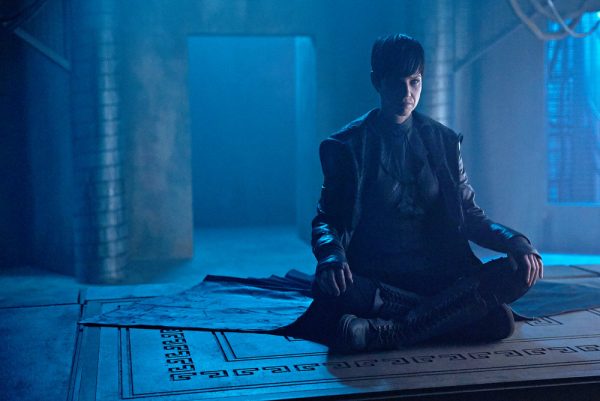 A little later, Cassie gets released on account of self-defense(?) and manages to gun up, lickety-split. She heads to Monkey Mansion and takes Monkeys out left and right. She’s an absolute killing machine, one might say Terminator, until she runs into Mom. With the gun knocked out of her hands (and apparently no back-up piece), she can’t take Mama hand-to-hand. This is when we learn the other side of Olivia’s half-truths. The Witness, speaking through Young Olivia’s body, then captures everyone’s attention.

The next couple of bits will haunt Cassie. They hurt, yes, but she was also just wrong and used about this whole side trip. When the Witness told Cassie she changed her mind about what to do with her baby AFTER Cassie told her that the baby could have purpose, it reminded me of last season when Athan told her the same thing about stopping time. Ouch. Then, the Witness teases Cassie with the prospect of ending the loop right then and there with the remaining bullet in her revolver. Cassie doesn’t bite until the Witness invoke’s Athan’s name, which does the trick. Cassie takes the gun and fires, hitting a sacrificing Mama Messenger rather than her devil spawn. Since a hand to hand altercation can’t end well for Cassie, she splits.

Been Used and Abused

Turns out the bullet wasn’t immediately fatal. Mama hung on long enough to give us that scene from season 2 (?) when the young Pallid Man sees his mother alive for the last time. Just like the rest of this episode, we get to see the rest of the scene now, which includes a very pregnant Olivia. Our parting shot of Young Olive is of her delivering the newborn at the base of a tree for the Night King… I mean Olivia the Witness to come and get.

At least Cassie finds Cole waiting for her in their Emerson Hotel room. Cassie realizes that Olivia had manipulated into this chapter of story to kill her mother for her, basically setting her free. Cole isn’t the only one who’s a little more leap than look, as Ramse might say.

Picking up right where we left off in France, Future Asshole Cole (Aaron Stanford) swoops in and saves Jennifer (Emily Hampshire) from the rain. Remember him from last season? He’s Cole, but less… positive. And wearing Athan’s splinter vest. Although he manages to save her, the bag with the stolen ouroboros still remains on the opposite side of the train station. Interpol officer Bonham (Conleth Hill) snags it and calls off the search. Before Future Asshole Cole gets back to his busy agenda, he tells Jennifer where to find “her” Cole and what to bring him.

Did you notice she brought Cole a Hyena Burger? Circles. This season will be full of them. In a flash of what might have resurgent Primary powers, Jennifer calls Bonham and sets up a meeting. Not only did the powers tell her that Bonham is involved somehow, but also his phone number? Those are pretty good powers. Going back to the loop analogy, Bonham will meet them at the beginning.

The Beginning of The End

Bonahm’s beginning is at the museum where the ouroboros lives. Jennifer and Cole either figure out the riddle or Jen uses her Primary power again to cheat. Either way, Bonham isn’t interested in arresting them. He’s actually there to meet Cole and deliver the Ouroboros to him. It’s always been meant for Cole and Bonham’s people have been trying to make this little meetup happen since forever.

All he has to do now, is solve the Da Vinci Code… er… puzzle. The little turning tumbler things correspond, some closer than others, to the legend of the serpent he learned as a boy. Presto-chango, the snake is no longer eating its own… uh… butt.

Inside, Cole finds a small, cloth scroll with “Blackleaf May 11, 1852” written in ink on it. Great. Now where’s Blackleaf?

Who were the goons that attacked Cassie outside the police station? Were they sent by our Olivia, or maybe Young Olivia’s mother?

Is the great cycle Olivia speaks of, the same one we think it is? By that I mean most of the 12 Monkeys series. What happens when it ends? Do things really start over or do we just carry on from that point in time, whatever that may be?

What is Titan’s true purpose? If the beams can turn someone with Messenger DNA like Olivia into a Primary, what else can it do? Can it create the Red Forest all by itself?

How did Future Asshole Cole know when and where to save Jennifer?

What’s in Blackleaf 1852 that would have been prophesied since the dark ages? It’s gotta be the one thing that will win it for our heroes, but what?