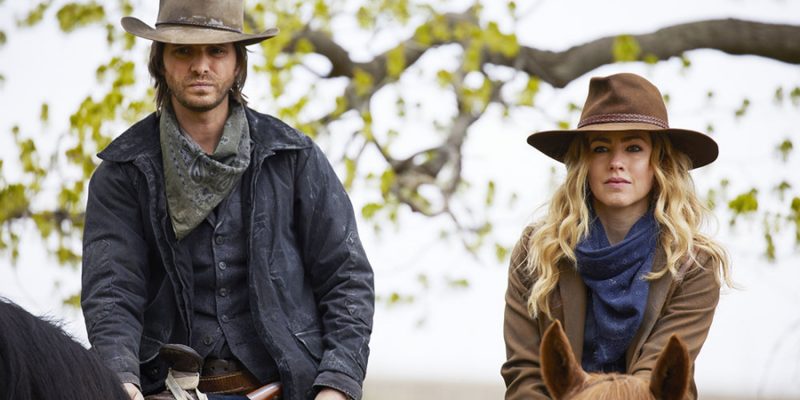 With this episode, “Legacy”, we got the American Old West setting featured in many of the trailers shown prior to the season. We also learned a couple important details that have been teased in the first episodes this season. Let’s hit a thorough recap and review those important points along the way.

First, we see the Joneses in the prime of their relationship. Elliot, the grandstanding front-man lectures to his rapt staff of acolytes as Katarina watches. He intends to blast a seed with his splinter beam to show the effect of concentrated time on it. About five seconds later, everything goes wrong, and the seed sprouts a twisting, familiar red bramble of vines and leaves. You’d think the guy would have tested this little theory before showing it off to the whole crew, right? In this, we see that Elliot exudes a brash and somewhat narcissistic personality – the exact opposite of Katarina.

In this scene we also see Emma for the first time. Emma looks like a friend to Katarina and a possible source of trouble for Elliot, but that’s only hinted at later.

Leave it to the one German in the group to know about an obscure, old-west town in Montana. With everyone splintered back to what passes for Splinter HQ now, they discuss. Hannah decodes the serpent story as an allegory where the serpent stands-in for time itself. That makes sense. She also says Olivia is the demon in the story. That’s a more dangerous assumption, but workable for now. If I understand the tale as interpreted by Team Splinter, it’s a prophesy foretelling the coming of the Red Forest.

Where this season’s themes involve loops and circles, Team Splinter plans to use the tip delivered by the Seers (the ancient Primaries from the opening scene of the season) to try and break the cycle.

Although he’ll admit to Cassie in the next scene that the serpent story came from his mother, Cole stops short with the rest of the group. Instead, he wants to move forward with the mission to Blackleaf. A mission in which they need Jennifer, Super-primary, to join them. Unfortunately, Jennifer the Former Super-Primary is the one they get. 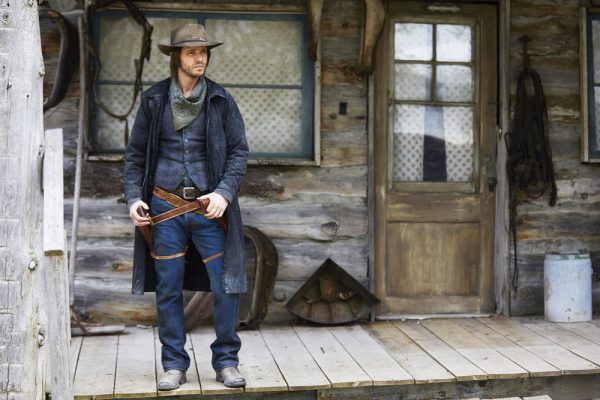 After the “little ladies” take care of some potential bad guys, they mount up and head into town. Although pilfering the bodies of the dead men provided Cole, Cassie and Hannah with a disguise, Jennifer still wears the red cutoffs and Hyena Burger tee from last episode. If you check out my interview with Emily Hampshire, you’ll see that Jennifer approaches time travel missions like playing parts in movies she’s seen. That’s why she says she needs a costume, rather than disguise or new clothes.

What’s a western without a trip to the saloon? Cole and his “posse” step in to the saloon of anachronisms, all of which Jennifer notices before anyone else. One such anachronism sits  playing the piano: Elliot Jones, in the flesh. When a goon shows up and drags Elliot outside to meet “Mr. Shaw”, we see through Hannah’s eyes something we’ve known for a while. We didn’t know it was in the old west, but we knew Elliot was working for the Pallid Man, building Titan. Hannah’s heart breaks, which she channels into anger.

With Cole providing another old west themed, cliche-filled distraction, Hannah stabs a fleeing Elliot with a tether. Hello, Katarina. It’s been a while.

Meanwhile, Back at Raritan

Elliot and Katarina’s awkward reunion reveals a lot. They’re pretty open with each other, indicating that old wounds have finally healed over. But that doesn’t stop Katarina from dropping a few bombs on him throughout the conversation. Never described as meek, Katarina plays the daddy card pretty early in the convo, just to keep Elliot on his heels.

Did you guys get that part when they were talking about when they split up? Katarina wanted to terminate her pregnancy with Hannah and Elliot wanted a family, so he took off. He considered the research the only child left to him, so he took it all with him. That Katarina! Combine this emotional roller coaster with the self-assessment that she’s going to die in 4-6 weeks and Elliot can barely keep up.

Elliot has his own bombs. Last week we learned that Titan needed modifications to fulfill its true purpose of stopping time. This week, all throughout this episode, Elliot realizes that Titan, with its massive amount of power generated, is capable of doing exactly that. Want to read up on the Hartle-Hawking state Elliot mentions? Go ahead. Showrunner Terry Matalas has done his homework. The Red Forest side-effect is just what happens from Titan’s emissions, basically. Crank it up and it’ll spread to… everywhere. This realization drives Elliot to head back to Blackleaf to try and cripple Titan.

Cole, Cassie, and Jennifer track the Pallid Man’s wagon, where they find Titan under construction. You noticed the forest around Titan turning red, right? That’s important. Inside the wagons, they find DARPA stuff, including multiple power cores. When the chief goon calls for lock-down, he notices our heroes almost immediately. Shooting starts and Cassie bayonets the chief goon. So much for that guy and his derby hat. To escape, they run through woods, until Cassie calls a stop and says Jennifer is not Primary anymore. She’d been noticing little things all episode long and finally challenges her. Before Jennifer starts crying, a Native named Tihkoosue shows up and says he’s been waiting for her. See? Still Primary, right?

In Tihkoosue’s hut, we learn that he’s Primary and has much to show for it. Crazy spiraling drawings with monkeys? Check. Red tea to travel through time and space? Check. He even uses it to see ancient Primaries. This guy knows his business a lot better than most Primaries we’ve met. However, he won’t let Jennifer go on a red tea trip. The watcher, and by watcher he means Witness, is there looking for her. More mysterious talk about a weapon and a couplet stuck in Jennifer’s mind about climbing steps and ringing bells makes me think SHE is the weapon.

She Had to Try

Against T’cousu’s recommendations, Jennifer snatches up the tea and goes under. She finds herself at the gathering of seers from the first episode – and they’re not happy to see her. This is just the kind of thing the the Watcher aka The Witness aka Olivia has been waiting for. Wouldn’t you know it? Olivia shows up and we see something new. These ancient Primaries have shields they project around Olivia to try and keep her immobilized and potentially send her back where she came from. They probably kicked her out of that scene, but she fled into Jennifer as she returned to Blackleaf. Poor Jennifer does the whole eyes blacked out, possession routine we saw last week with young Olivia. Olivia maintains the possession long enough to absorb when they are before Cassie applies a medical slap. Yep. Jennifer led the Witness to find out about the weapon they seek. 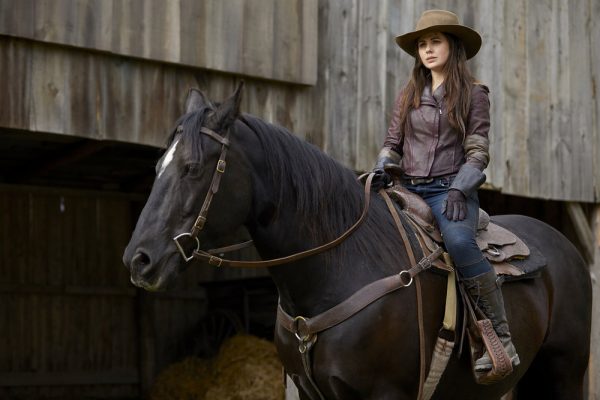 With everyone back at Tihkoosue’s camp, Elliot explains that Titan can stop time – i.e. the more permanent option sought by Olivia. He doesn’t think they can stop Titan, but they can stop it from being weaponized. This all ties into Olivia’s statements last week about Titan being unfinished and needing modifications. The plan feels like a very temporary patch, but it must have worked since the Titan we know isn’t yet capable of stopping time.

They hatch a plan. Elliot will distract the Pallid Man while Cassie, Hannah, and Cole steal dynamite and commence blowing stuff up. Jennifer’s role? Just stay out of the way.

Elliot had to know that when he entered the Pallid Man’s tent, his life would be over soon. After admitting to a previously unknown to him child and a willingness to fight for that child, Pallid man leaves to deal with gunfire. Unobserved, Elliot steals a USB drive from Pallid Man’s laptop with Titan’s plans on it.

Cassie and Cole set up stolen dynamite with a long fuse, but lo and behold we run into a former ally. Olivia sent Deacon and Monkey-men to intercept Cole’s team with extreme prejudice. He opens up on them and puts out the lit fuse. They scatter and Deacon directs the Pallid Man to move Titan from here. Although the bombs never go off, the impromptu move probably left the needed additional power cores behind. The longer term impact of the attack has yet to be seen.

The Pallid man tells Deacon to go retrieve the architect, but instead Deacon shoots Elliot. He must have gotten different orders from Olivia. Or he just likes shooting people. Either way, Hannah attacks and T’Cousu hits Deacon with arrow. Rather than continue wounded, he tethers away. Cassie and Cole show up as Titan leaves and Elliot dies. Hannah finds USB drive and they all head home.

The remaining Joneses catch up. Hannah tell Katarina she knows her mom is sick as they look at Elliot’s USB drive. Team Splinter reconvenes and everyone starts spilling their guts. Jennifer accuses Cole of hiding something. In a goodwill gesture to start the talking, Katarina tells the team of her shortened lifespan. Cole comes clean and says the serpent story came from his mother, a woman named Marion. Jones confirms this for herself by pulling Cole’s birth certificate from her records.

Back at Titan, the Witness and a quickly healed Deacon talk. A plan is in motion to get Titan fixed up. Well good. Want to share with the class, Olivia?

In a final flashback, Elliot and Emma run the machine again, which produces the same problem as before. Elliot declares that objects, like time, can only go one direction. If you try to go both ways, with enough power, you’d rip a hole in the universe. Thus, Titan’s true capability. Although by this point this episode had already made that pretty clear.

At Emma’s home, we learn something new and important. With an Army of the 12 Monkeys medallion around her neck, she goes on a red tea trip. Olivia appears and in a vaguely European accent, she says she knows how to complete Titan. This makes her mother, very proud to hear.