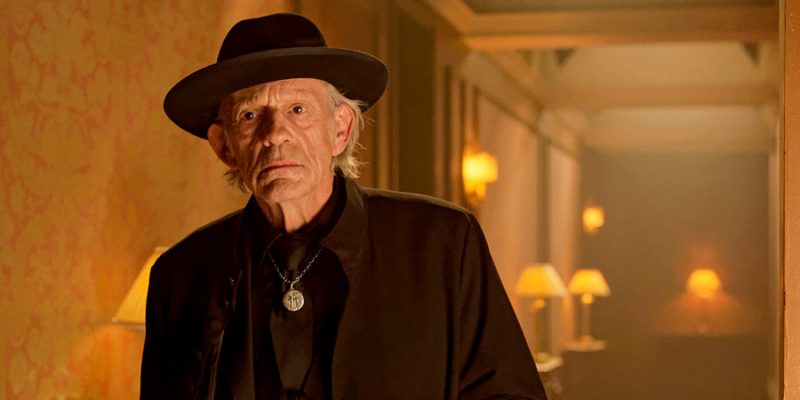 Let’s welcome Christopher Lloyd back to the house monkeys built! He returns as The Missionary, the man who would travel with young Athan and spread the monkey word across the land, tent-revival style. Never mind that they killed most who attended. Here, he’s wallowing in the depths of happy and painful memories. We get to see some of how he lost faith and why he would have his own interest in creating a place without time. His wife, whom he’d known his entire life, died young. That’ll do it, alright. The illusion ends when Olivia arrives with her own problems. She needs help finding the weapon she heard about last episode and he’s willing to help her out.

Cole and Cassie take a moment to reconnect, physically, but Cole’s got a lot on his mind. The birth certificate that surfaced at the end of the previous episode has Cole wondering about his mother. Cassie detects the subtext and says they should go back, since they have a time and place to find her (when she dropped off young James to his father). Having already asked Jones, the answer is “no”.

Back at Splinter HQ, Jennifer pores over pictures and data with Adler nearby fixing the Splinter vest. Jennifer stumbles across what she’s looking for: a picture with her, “climb the steps, ring the bell,” mantra written on a hotel wall. Everyone else’s eyes are drawn to the dead men also in the photo. Dead Russian spies apparently there to purchase ancient, powerful weapon. Cassie and Cole head out minus an exuberant Jennifer to 1966.

In 1966, complete with go-go boots and Harry Caray glasses, Cassie and Cole approach the motel room where the spies get killed. Although they’re too late to stop the murders, they intercept a phone call meant for the dead buyers. They surmise the killer had nothing to do with the sale since the gigantic briefcase of money remained in the room. Quick-witted Cole arranges to meet the seller on their home turf, back at the Emerson. Too bad the missionary waits outside, quietly watching where they go.

Despite her appeals to present-day asshole, Cole sends Cassie to the lobby to keep an eye out for trouble. She finds it and a sudden headache when The Missionary comes in and gets captured by his goons. When she escapes from them, she finds Cole and the seller, both dying, the seller from a gunshot and Cole from poison.

After tethering home, Jones and Adler arrange to send her back a few minutes earlier in hopes of warning Cole. The previously seen sudden headache was actually brought on when the two Cassies came in close proximity to each other, tempting paradox. Upstairs, she’s unable to change Cole’s course and has to hide in the hallway. Where she runs into the missionary. Again. This time, his main goon, aka Pallid… Young Man, has more success taking her into custody.

The Missionary basically re-explains the opening of the episode, making comparisons between himself and Cole and Cassie. Again, The Missionary and his Monkeys have missed the weapon by acting too quickly during the exchange. Nevermind. He soothes his disappointment be torturing our heroes with poison AND giving us the missing insight into Pallid Man’s weird botanical obsession. Turns out, he’s always worshiped vegetation, enjoying the balance found in nature. That and finding poisonous plants for his dad, just for occasions like this. After dosing both heroes, Cole gives the information of where to find the weapon in exchange for saving Cassie’s life. 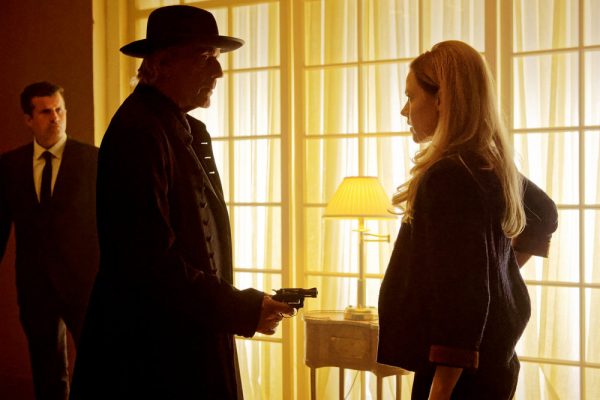 Back… to the Future, Jones and Jennifer work quickly to come up with a contingency for Cassie’s hasty plan to save Cole. After taking a closer look at the FBI report concerning the dead Russian spies, they detect a possible Easter Egg. A passage from The Time Machine included in the report tips them off that the reports author may have been Super G-man, Robert Gale. They send Jennifer to figure it out.

Good news! He survived! Thanks to Athan’s drawing from last season’s Christopher Lloyd episode, he knew to wear a very bullet-proof, bullet-proof vest during the trip to the Wall. Lucky all those German and Russian marksmen hit him in the chest, right? Gale’s one of my favorite character. “This ain’t my first rodeo!” Even though that’s a modern turn of phrase, I still enjoy when Matalas and the crew insert things like that into the dialog.

Gale and Jennifer arrive early thanks to Gale’s unsubtle Camaro and they bug the room where the Russians die. After Jennifer’s impatience takes control of her actions and she bursts into the Russian’s room, Gale has to shoot the Russians to keep them from killing her. Now we know who shot the Russians and why Gale wrote the original report. In order to keep causality intact, they scurry around the room, recreating the crime scene photo that spawned this mission in the first place. With their plan to intercept the weapon foiled, they turn their attention to an antidote for Cole’s poisoning. Gale comes up with some FBI magic that… should work.

Back at the Emerson, post-poisoning, Deacon stops the elder Mr. Shaw. Did you notice the little tune he whistles is the same one his son whistles when we know him as the Pallid Man? Deacon goes to the bar for the weapon and The Missionary, Mr. Shaw, takes his remaining entourage into the alley. Gale ends the last red-shirt Monkey as an “I’m serious” gesture, so Mr. Shaw gives up his life so that his son and his hat can get away.

If Gale made it, then so did Jennifer. She bursts in, gives Cassie the FBI-manufactured antidote, then rushes downstairs for the weapon. Although she runs into Deacon, we learn, through a call-back wink and tongue-click, that there’s hope for him. Team Splinter may have a man on the inside. My money is on Deacon staying true to Team Splinter, but having to make it look good along the way. We won’t forget about you, Deacon.

At Least Everyone Survived

Cassie revives Cole, but only after he has pleasant, spring-break like visions of water and sunshine. Gale wins this week’s best line contest with, “Look who’s back from the dead.” The Joneses splinter in for Gale’s debrief of the weapon’s most recent owners. I might be making this up, but I think I recall that Gale was a major throwback to the WWII era. So, it’s no surprise that he’s well informed on the shadowy Nazi group responsible (the Ahnenerbe) for mystical object research. The Ahnenerbe called the mystical item in question “Die Glocke” in their records. Way to go , Gale with the intel! Gale deserved the send off he received in this episode, on his own two feet, with many years left to live.

Despite her urging to go to to WWII with Cassie and Cole, Hannah receives another mission from Jones. Meanwhile, Cole and Cassie talk about their own future. Cassie gives voice to something Cole has apparently already made peace with: Saving the world or saving themselves, not both. The episode’s final scene suggests Cassie might have an upcoming change of heart regarding the mission.

BTW – Where is Olivia’s daughter, Emma? And where is Jones sending Hannah?