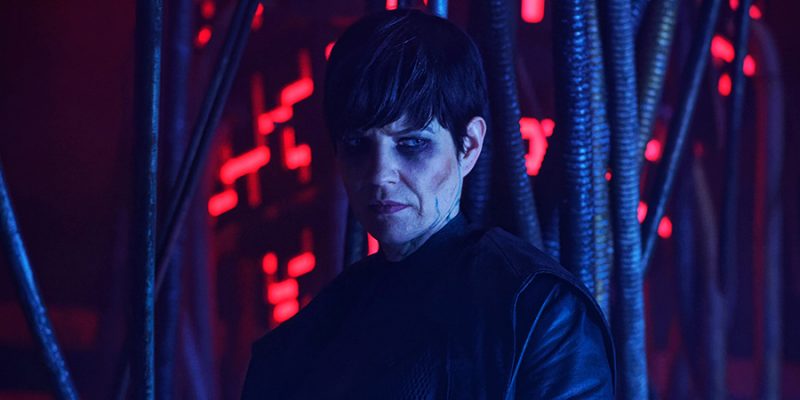 The complicated minefield of mother and daughter relationships shapes this episode’s narrative. The opening question-and-answer style back-and-forth of both Hannah and Emma’s backgrounds tells us a lot. People other than their mothers raised both characters. Although all the intervening stuff that happens to them is very different, at their core, they share the same issue: they want their mothers’ approval and feel crushed under the weight of their expectations.

Picking Up After Die Glocke

When the Witness spots Katarina’s shaking hands, she easily identifies temporal radiation as its fatal cause. The impromptu thumb digging into Katarina’s forehead, post-Katarina’s brave posturing gave me more than the creeps though. It let me know our beloved curmudgeon would probably get very hurt this episode, even with Deacon secretly in her corner.

BTW – Don’t you think Titan’s big enough for two holding cells? Or is putting her in Deacon’s cell just a Witness-y way to mess with Deacon’s mind?

Jones wants her daughter to know what they’re fighting for. She sends her back to a time before the plague to Cole’s Emerson room with an envelope. Given the “open-me” date (March 8, 2009) on the envelope and the very handily kept-up desk calendar nearby (March 9, 2007), we see that Jones has giver her daughter a couple years to experience life in a real society, before the envelope’s date.

What she finds of our time leaves her initially unimpressed. Like the opening, both daughters go back and forth and explain what they dislike about where they find themselves. Although they complain about different stuff, the root of their emotion comes from the same place: a growing dissatisfaction with what their mothers fight for. Bryan, the friendly bartender enters her life just as she begins to weigh what she should do with her last year left before opening Katarina’s envelope.

Emma’s life has led up to her role in Titan. From the time she was born, Olivia battered her with tutors, lessons, theories, and math (Good God!). Although Elliot Jones had no idea what he meant when he asked her to finished the work he’d started (last ep.), this has always been her mother’s expectation. In order to have a person on her team that she could trust to finish Titan, she had to create them from scratch. That doesn’t mean she gets cut any slack or shown any motherly warmth though.

Although Emma’s been raised in the Army of the 12 Monkeys, it looks like she stayed at Monkey Mansion, and learned enough of normal things to integrate into the Jones’ research team without standing out as weird. Living in Titan takes a lot of getting used to, especially when mom’s the boss. Too bad for Olivia, all of this exposure to Titan and the real, pure strand of 12 Monkeys around her diminishes her devotion to the cause. It sure doesn’t help when Olivia threatens to push her off the tower!

Turns out Olivia wasn’t kidding about her ability to dig around in Katarina’s brain. She described it as just an extension of the Witness’ ability to travel any-when and anywhere. I’m not sure I like this new addition to the Witness’ powers, but then again, I liked The Last Jedi (by that I mean I can roll with late additions to canon). Her exposure to Olivia’s wicked ways appears over when Splinter-vested Cole pops in for a rescue. I loved seeing her loyalty to Deacon in that moment, as it represented her growth as a character. Seeing Cole’s rigidness about leaving Deacon to find his own way home could have represented the strict adherence to mission he’s displayed for the last couple seasons, but we find out later it was just Olivia, being a jerk. 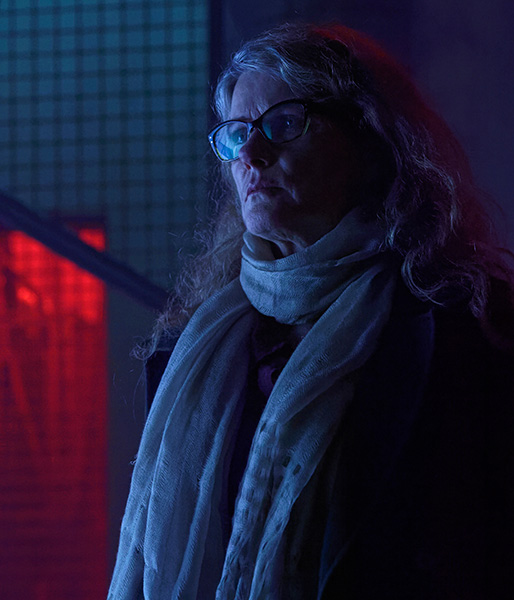 Listen closely while Katarina is under Olivia’s control and you’ll hear bells in the background music. As the perspective started to warp and the voices all had a funny echoing, I started thinking either Katarina’s point-of-view has become unreliable OR we’re stuck in a much more capably crafted illusion than I thought Olivia capable of. Looks like we went with option B. Katarina catches on quickly and tries to poke around in Olivia’s brain in return.

Although it looks like Olivia could probably wear down Katarina’s mental defenses after enough sessions, Olivia decides to go for the throat and threaten Hannah. Katarina appears to break when Olivia resorts to a killing spree featuring Hannah. I hope no one out there in TV Land thought that this display actually broke her. This is another case of a smart character being “exactly where they want to be”. Where is that? In Titan, in 1491 Hertfordshire, England, thanks to Jones’ information “leak”.

Despite Titan and Jones giving Dr. Adler something to aim at to lock their machine on to, much uncertainty remains. Adler, who started this series as little more than a featured extra steps up when confronted by Cole. This is the final season, right? Way to service the character, Mr. Matalas! I bet Adler’s been keeping that “knock you on your ass, boy” comment inside for years. Despite Adler’s warning, the team presses on though.

Anybody else get a little emotional with Cole and Jennifer’s big hug before she left? That’s a lot of emotional punch to put into one scene, the hug and the haywire splinter. Although I resisted the idea that we’d just killed Jennifer, somewhere in my little TV soul, I thought we just might have. Instead, we get the return of Old Jennifer! After all, she has been killed yet in this time. The first thing that came to mind in her re-introduction was, “That’s a VERY Primary version of Jennifer and probably more help than the original at this point.”

Old Jennifer bears dire tidings. Even with the machine’s lack of precision getting to 1491, Young Jennifer needs Cole and Cassie’s help, right away. By the end of the episode, we see they’ve been sent to Hertfordshire, though we have yet to find out how close to Jennifer they are.

Hannah tries to forget her own destiny, lead a normal life among normal people. On the day printed on her mother’s envelope, she had every intention of leaving her life as Hannah the Daughter behind. The bad stuff at the bar showed her she’s fated to open her mom’s envelope and keep fighting, though. Good thing she did open it. Her mom left her what may be the most important mission of them all inside: Save Cole’s mother from being killed!

Emma feels like the options presented to her are more desperate. End the world or fail your mother. Rather than commit suicide, she escapes into a new identity: Marion Woods! But wait, that’s Cole’s mom, isn’t it? Let’s put a pin in this one. we might need to revisit later.

The two daughters meet in the bar where Marion is supposed to be killed. After one of those “it’s all just a misunderstanding” fights, they team up just in time to flee a couple 12 Monkeys enforcers. The gunmen? Yeah, Olivia sent them to “end her daughter’s cycle”. That’s Monkey talk for kill. Don’t look for a Mother’s Day card next year, Olivia. Too bad their little misadventure cost them the tether Jones sent with Hannah. Do they find their way back to the future or do they just have to ride it all out, like Old Jennifer?

Questions for Next Episode

How do Hannah and Emma find their way back home?

Can Deacon handle Olivia’s “top guys” when they betray him? (I always bet on Deacon now.)

Why don’t Cassie and Cole ever try to dress the part when they time travel? I mean, they’re in New York, right? Nobody’s used the costumes on Broadway in a couple years… Just spit-balling here.