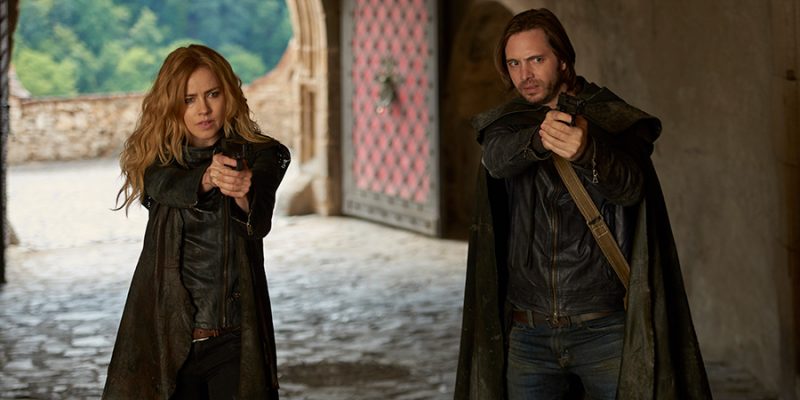 Remember all the way back to the first episode of the season? It was a whole two weeks ago, after all. Anyway, in that opening scene, we saw seers put to death by a crazed guy with the Witness, uh, witnessing the whole thing. Then we saw a frantic older man hand the ouroboros puzzle to a young girl, which started the the whole chain of ownership which eventually delivered the artifact to James Cole. This season filled in a couple blanks so far, but this episode goes the rest of the way, with a few omitted scenes to flesh out what we’ve already seen. Excited? Me too. Hang on, we’ll get there.

Even though we just saw Cole and Cassie arrive in 1491, you have to remember that Titan beat them there. That was how they could lock their under-powered machine onto the time and place. This episode picks up at that point in the story; Titan arrives while Andrus, a tortured separatist Primary, tries to self-flagellate the voices away. I’ve asked around for you, bro. It won’t work. When Titan pops up, and Olivia drops by and offers Andrus enough right-sounding talk for him to pledge fealty to her. I sure hope no practicing members of the Druze religion take offense to tying them in with the Army of the 12 Monkeys.

Plus, now we have a name to go with the face of the guy that burned the Seers in the first episode this season. Is he one of the titular demons this episode?

After dropping her gun in the pigsty in which she landed, Jennifer encounters a couple local self-appointed keepers of the piece. Turns out our recent acquaintance, Andrus, holds some sway over this hamlet. He’s given the townspeople instructions on how to ensnare “witches” (Primaries to you and me) looking for the steps. Since we know Andrus has turned against the other Seers, we know he’s really just using the town to take out the competition for him.

Before Andrus takes Jennifer under his axe, Corus, a local young Primary girl, frees Jennifer from her feces-infested imprisonment. I love how the characters have jettisoned all subtlety and thoughts of impacting causality have been in these latter adventures. Cole and Cassie showing up and gunning down a dozen people in front of an entire town wouldn’t have been Plan A early on. Screw that. Fire away! At least it looks like most of them took it in the leg…

Following last episode’s barroom shenanigans, the pair of time-princesses catch their breath back at the Emerson. Both share a brief, “Holy crap,” moment when they lay their cards out on the table. Hannah possesses great fighting skill, but Emma has Messenger DNA. Luckily, Emma also has a cool head and no one starts punching each other again. Really, it felt a lot like a Parent Trap situation. Your mom is… wait. No! YOUR mom is, who?

Too bad these guys couldn’t have had their chat a little earlier in their lives. Emma has long known her efforts to reconfigure Titan would negate any weapons Team Splinter ever found. You think she could have left that Hawking-Hartle State thing on a slower simmer, right?

Regrouping With The Locals

I think I’m starting to understand Olivia’s powers a little more. I had previously thought that when she blasted herself with Titan’s beams, she became primary. Now, I’m thinking it’s more like she has access to Primary powers, but only when she’s hooked up to the apparatus back in Titan. The scene in which she hands Jennifer’s forgotten gun over to Andrus for him to use his Primary mojo made me ask myself why she didn’t do it herself. This explains that. It also explains how Olivia knew to find that gathering from this season’s opening scene. Andrus brought her there.

Corus, the Primary whose father, Nicodemus, is the local maker of things, guides Team Splinter to her super-modest house on a hill. How long has Deacon been waiting for them? He’s wearing a pretty awesome, period-correct outfit… Super elegant way to show us that Deacon easily handled the “top guys” that were supposed to take him out – those were the stiffs Cole and Cassie shoot up in their way in. Time is too short now this season to waste on showing us Deacon kicking another pair of Monkeys’ butts.

While Andrus and Corus discuss Cole’s merits as Time Jesus, Deacon and Jennifer take a second. I actually had a little something in my eye when he said, “for me,” about taking his knife. Combined with his heartfelt conversation with Cole, I started to sense a sacrifice on Deacon’s part coming. He’s opening up, he’s giving away his stuff… Not normal behavior for him. The writers make good TV look so easy, don’t they? Second Verse, Same as the First

Another guest appearance by the Once and Future High Sparrow (Jonathan Pryce) marks the extended version of the season’s opening scene. We get to see a lot more in this version. 1. The lead Seer / High Sparrow didn’t exactly go down without a fight. He gave Olivia a pretty serious spate of big-league insults prior to his demise. 2. He informed a little more on my theory that Olivia needs Titan to use her powers. 3. He hinted that the weapon they think they’re seeking isn’t really that important and 4. We saw why she burned them. First time through, I thought it was just an extermination type scene. Not really, no. She burned them because their concentration and focus on hiding the location of the weapon needed something to break it. Olivia chose excruciating pain. It worked, because Andrus figured out where to go.

This reveal and Team Splinter’s own legwork puts both sides at the same place, at the same time. (Felt kind of like Titan cheated, what without having to climb the steps.) The weapon both sides seek lies waiting inside an abandoned, de-sanctified church. What is it? Another time-travel machine. Like a medieval version of Jones’ chair, really. Nicodemus, escort to unholy places and local maker of things, unfortunately possesses no knowledge of when or where the chair will send you, once Jennifer turns it on.
Why would the original Primaries have kept that bit out of the legend?

Cole, in the slowest walk toward the finish line in history, doesn’t ever make it to the chair. More Monkeys and more guns quickly puts the idea of mounting a defense after Andrus slays Nicodemus. A couple very questionable things happened next. Cassie and Andrus touch the Glockeat the same time, trying to keep it from the other. Both of them grow a Rogue stripe in their hair. Neither grasps the Glocke, which disintegrates after flying off the bottom piece. Since this whole scene amounts to a man down and no weapon to use against Olivia, I have to imagine this part bears significance. I’m leaning toward something about the weapon having been made part of Cassie now. Where she hasn’t had a specific role in the story following the birth of Athan, now she may be vital again.

True to my sad prediction, Deacon sacrificed himself to stall for time. Typical Monkey executions usually feature brutally deep stabbings. I didn’t expect Olivia to go all King Joffrey on him, though. There was no way he could have known about the splinter vest. Perhaps he couldn’t stand to watch any of his friends die. Perhaps he knew the others still had more to give. I think he just knew that their best chance to stay alive would be to try and keep them alive himself until something happened. Something did, Deacon. Well played.

The Splinter vest escape scene rocked. Any time Team Splinter leaves the bad-guys flustered and confused makes me a happy viewer. I also enjoyed Cole’s loyalty to Deacon. I would have been happier if Adler had sent the vest back a couple seconds earlier, but at this stage we need to remember the stakes. Deacon’s death, if it holds this time, really puts the last three episodes under a different lens. Anybody, except probably Jennifer, could be killed now.

Even though the weapon’s key had been disintegrated, Olivia still uses Titan to paradox the church out of existence. Doing so makes it impossible for Cole to try and save Deacon or ever try to access the weapon again. Although I’m sure this episode’s event elevated Cassie’s role in the show’s big ending, I’m positive that Jennifer is key. Yes, Cole will have to do something amazing, but Jennifer, Uber-Primary, might just save the day.

That version of “Don’t You Forget About Me” has proven super hard to track down for you. The closest I could find is this version, used in a State Farm commercial earlier this year. I think it’s the same arrangement, but obviously a female singer. If you know who, let me know!