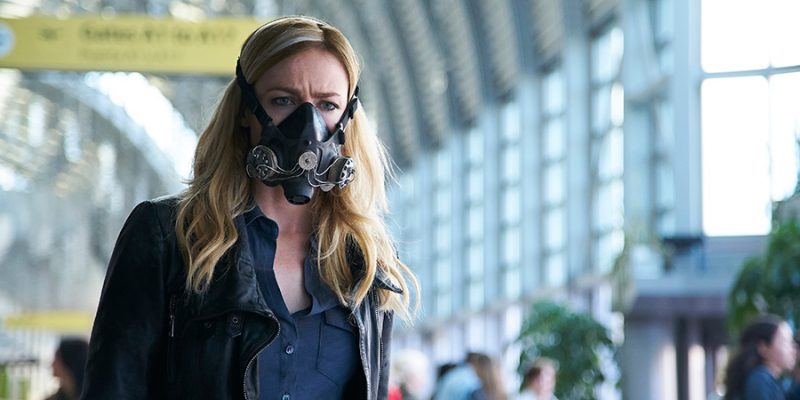 Anyone else want to watch some Game of Thrones with me, to cheer up a little? This episode. You guys. Really. Game-changing, series-altering, emo-inducing TV. In a season dedicated to circle and loops, this episode gave us a ton of callbacks to prior episodes to go watch again. Heck, even the Twelve Monkeys movie seems involved now. It all comes to a head, but it doesn’t lead where anybody (except this eagle-eye reddit user) thought it would.

Jennifer and Her Symbols

Last episode, Old Jennifer encouraged her “Egg” to get cracking. With a sizable piece of sidewalk chalk, Jennifer spilled out all of the glyphs and symbols out of her mind and all over an Emerson ballroom’s walls. These are the same symbols she’s been scribbling on walls and paper since we met her in the asylum. They constitute the final mystery given to them by the Primaries.  In every other case, we’ve seen the symbols out of context and without a key. This time around, Cassie, Jones, and Adler all use their skills to sort out the symbols’ meaning. Cassie gets the ball rolling when she notices the symbols exist in a specific order on the spiral.

To be honest, all of Team Splinter’s interpretations of the symbols and their relationships to each other all felt a little arbitrary. Do you watch Doctor Who? The 10th Doctor once referred to the technical underpinnings of time travel as “wibbly-wobbly, timey-wimey stuff”. This all felt like the 12 Monkeys version of wibbly-wobbly, timey-wimey stuff stuff. Look at my callback section at the bottom of the review to see how long the spiral has been there… In show time, it may not have been very long in calendar days… Ok. I’ll let it go. This sort of thing happens all the time in sci-fi, and I readily forgave the writers since time is so short now.

What They Think They Know

After decoding the symbols, Jones discovers they all match up to times and places of their travels, all except one new one. This date, two days before the plague starts also has an ominous location. JFK airport. Many viewers will not have seen the 1997 movie Twelve Monkeys, but then again a bunch of as have. I’m about to spoil the ending, but the movie’s been out for 21 years – my own internal spoiler filter is really only about three weeks for conversations among fans (which we are). Anyway, at the end of the movie, Cole and Dr. Railly try to fly to the Florida Keys to see if they ride out the plague. Instead, Cole is shot and killed at the airport. Knowing this, made me nervous about sending our Cole into that same situation.

Their first trip, much like our first visit to Matthew Cole’s camper with Hannah and Emma, only gives us part of the story. When they arrive, bedlam has broken out and we see a dead cop and the broken vial. Also, over Cassie’s shoulder, we can see the unmistakable form of the Pallid Man, walking away from the mayhem. Natural assumption: The shooting caused the freak-out and the Pallid Man dropped the vial. It’s not quite right, but that’s all we have to go on at this point. Since all appears lost in that moment, Cole and Cassie decide to tether home and give it another shot. (BTW – Cole has always been immune to the virus. That’s how he’s still alive and could put his hand right down it.)

Studying the remains of the plague vial reveals something we already knew. Markridge, Leland and Jennifer Goines old company, manufactured and very likely stored the vial. When Cole and Cassie go back there to grab the vial, the Pallid Man watches, but doesn’t intervene. Still believing their mission is to save seven billion people, Cole and Cassie head to the Emerson with a LOT of bleach to kill the plague. 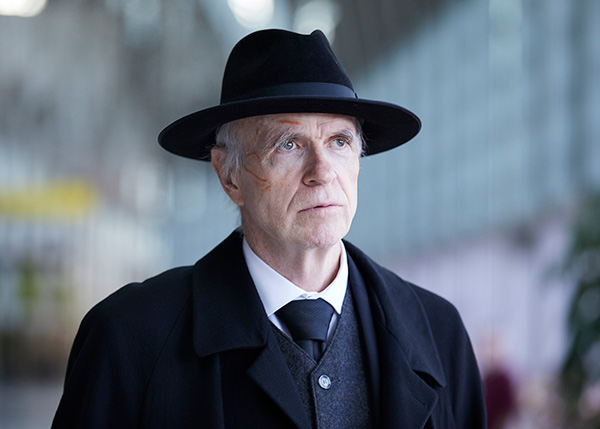 Hannah, operating under the impression that Emma (posing as Marion Woods) tries to convince Emma to help her. Although raised by tutors for her mother’s time-ending mission, Emma would rather try to help save the world  than end it. She agrees to join Hannah on a trip to Raritan, they’re only hope for time travel in 2009. The pair get run off the road by one of Olivia’s henchmen set on ending Emma’s cycle. Definitely no Mother’s Day card now.

Once out of the crashed car, the pair eventually elude the Monkey goon and find Matthew Cole’s camper. This gut-punching episode sets us up here to think, “Great! Now we’ve got Cole senior and Emma in the same place! Let’s make a savior!” Not so much, as we learn later.

Nine years later, we meet Hannah again, without Emma anywhere to be seen. She’s waiting in Cole’s Emerson room when Cassie and Cole show up to destroy the plague vial. A lot has changed for Hannah since we last saw her.

Lucky for Team Splinter, the effects of Titan’s world-ending paradox occur gradually rather than instantaneously. Just as soon as Emma’s machine reaches 100% probability, Olivia flips the switch and starts the process. Adler and Jones can see what is happening from Splinter HQ. Wasn’t it interesting to see the Pallid Man use the red forest and cabin to report in about Cole and Cassie’s project? Since finding out Olivia was the Witness, we all knew  that he’d been talking to the sister that killed him the entire time. But this was the first time we saw it. Olivia does a lot of spooky stuff.

Meanwhile, in the Emerson, Cassie and Cole debate the mission versus what the Primaries intended. This whole time, all four season, Team Splinter fought and lost many people all in the in the name of saving the seven billion plague victims. Cassie wants this mission to be the mission. She’s a doctor, a life-saver. Cole doesn’t have to push very hard for her to see his logic though. Without the plague, Katarina wouldn’t have finished the time machine, their one weapon to stop Olivia. Remember, although she told everyone she finished the machine to save everyone, she really did it to save Hannah. To preserve causality and try to save at least a -few- people (and time itself), they have to go through with dropping the vial in the airport themselves. Because, after all, it was always them.

“Mothers die for their children. Yours died protecting you.” Hannah, like Deacon last episode predicts their upcoming sacrifice, although she hides the true meaning of her words initially. If she had come out and said, “I am your mother,” at this point, Cole almost certainly would have lost perspective on things. Although he would have kept to the plan, he might have tethered Hannah home right then and there. That would have changed things a lot. Instead he just gives her his tether before he leaves with Cassie for their dire mission. (Did you notice the TAB soft drink in this scene? It’s on the mantle. Back to the Future reference?)

Other Bits, Clicking Together

Jones, Adler, and Jennifer discuss significance of the symbols’ special date. Where the scientists see logic, Jennifer sees red flags. This is why teams need diversity, even if you have to include a crazy person to get it. Jones figures out that the weapon wasn’t important in and of itself, as long as they had its function. After a dizzy spell, Jones has a new way of looking at the data gathered from the symbols. The computer simulation resulting shows that the loops and cycles CAN be broken, but with a cost. Since the dates from the symbols actually only represent Cole’s splinters, Jones reasons that all of the events of the show have been specifically designed to erase Cole!

It’s the End of the World as we Know It

At the airport, Cole and Cassie have one last gut-check before actually breaking the vial. They’ve obviously relaxed their observational skills, because Olivia has planted several Monkeys at the airport to “end Cole’s cycle”. Cassie acts fast to neutralize a possessed cop shoots after he shoots at Cole, but it’s too late. Hannah, from out of nowhere, jumps between Cole and the Monkey’s bullet, saving Cole. Holy crap, guys. “Yours died protecting you,” should have run through your brain at this exact moment. Although it’s later spelled out in a previously unobserved letter left in the Emerson room, Hannah is Cole’s mother, not Emma. That makes Katarina, his surrogate mother of the past few seasons, his grandmother.

Cassie puts it together and lets the vial drop.

I’m having trouble placing this scene in the timeline. It’s poignant and nice to see the family together one last time. I just can’t figure out how Older Hannah, Informed Cole, and Cole’s Grandma all found the time to get together in 2017 for this meeting. Please. Tell me.

The one we originally thought of as the prophecy’s demon, Olivia, has already started her mega-paradox. We see the red clouds sweep over New York. Presumably, it works like the Nothing from The Neverending Story and just erases everything in its path.

Cole says, “I’m the demon.” This, unfortunately, makes sense if you believe that the whole thing was setup just to destroy him. How does killing, or erasing, Cole prevent the end of time though? After all, it’s Olivia’s machine currently doing just that, right now. We’ll have to wait until next week to see exactly what the Primaries (and Terry Matalas) meant by that.

“If you give me yellow, I could paint you the world.” – Jennifer Goines Episode 102 “Mentally Divergent” – Just before she says this, she notes aloud that her pills are, “Reds and Blues. Primary.”

The floor spiral – First seen in episode 306 “Nature”. Jennifer creates it while unconscious, in a Primary hallucination.

The Night Room – That one’s easier. Episode 105 “The Night Room”. We see more about the origin of the virus. “Something about its eyes,” Jennifer said about the partial corpse which originated the virus… Tell me they’re not Otter Eyes.