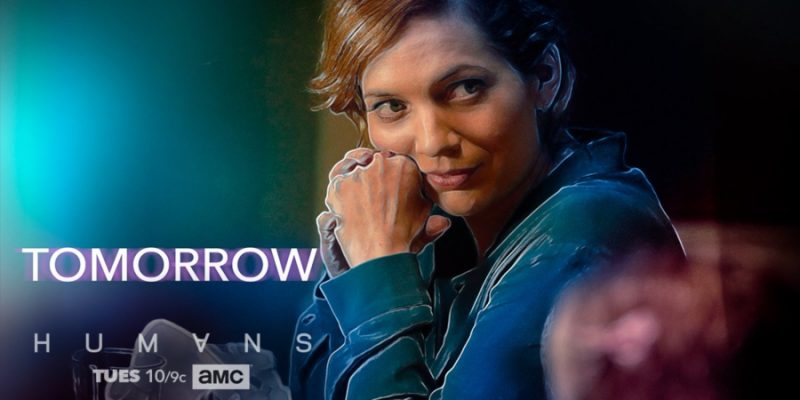 From the glimpses of Humans Season 3, it certainly looks like it will be worth the wait. Think chaos, orange eyes and hookups. Read on if you’re OK with potential spoilery info.

AMC gave us a preview of the Season 3 premier airing tomorrow night. There’s a bit of action in the slightly skewed present.

It’s one year after the “dawn of consciousness” for our familiar green-eyed Synths. Due to the resulting chaos, they’ve been replaced by the new and improved, submissive orange-eyed model that’s “100% safe” – yeah, right!

It will be interesting to see how the green-to-orange model transition plays out. Would you trust the new and improved model?

Nightclubs and Hookups and Explosions – Oh, My!

It will also be interesting to see how the now conscious green-eyed group, that seemingly can pass for human, navigates the chaos. We get a sneak peek through Niska’s viewpoint.

I’m excited for the Humans return for many reasons. Speaking very personally, all my other currently-airing faves are coming up on break and, for other Obsessenachs, I’m suffering in the Longest. Droughtlander. Ever.

Thinking about those others, I can’t help but draw man versus machine parallels with Westworld where another AI group has gone rogue. If you love Humans and aren’t watching Westworld, I highly recommend checking out synthetic “Hosts” Dolores and Maeve as they kick butt over on HBO. Michelle Harvey covers Westworld for TiBS.

Back to you tomorrow. Have a good sleep!