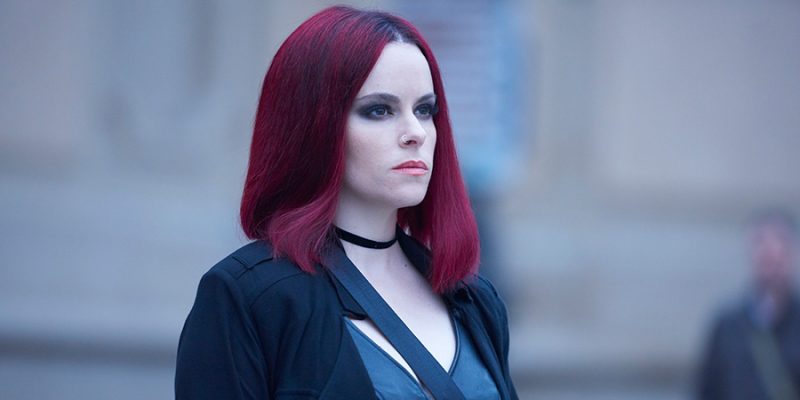 Getting to Know Emily Hampshire

TIBS: How did you wind up becoming Jennifer Goines?

Emily Hampshire: Kind of the old fashioned way. I auditioned. I was doing a series in Toronto, which I’m currently doing called Schitt’s Creek, and I got this call from my agent to audition for 12 Monkeys. At the time, I was in the middle of shooting and I wasn’t a very confident auditioner, so I was like, “I’m tired, I can’t do it…” She told me, “Go in. The casting director is Tina Gerussi.”

I’ve been an actor since I was fifteen. Tina was casting director on one of my first things, and knows that I get super nervous in auditions. My agent told me, “It’ll just be you in a room on tape.” I agreed and I went in and I did it. Then I got a call back to go to LA and test with Aaron (Stanford). Terry (Matalas) had told me the reason I got the role was that I made him laugh.

The normal thing I’d do is watch the movie and research it, but I didn’t have time to do that. So, I wasn’t doing an impression of the Brad Pitt character. I just found my own Jennifer and I think that was what worked for him. That’s how I became Jennifer.

Emily Hampshire: I’d seen it years before, like on TV or something. I didn’t really remember it. Once I got the part, I watched it because I kept hearing all this stuff like, “Emily Hampshire’s the Brad Pitt character…” I started to be like, “Oh my God, this Brad Pitt character is kind of a big deal!” Then I watched the movie and I was like, “Oh, am I supposed to be doing this?”

Terry really instilled me with the confidence that Jennifer and I might share similar DNA. The nicest thing was my first day in a costume fitting, he’s like, “I made you a special thing.” He made me a replica of the sweater that Brad Pitt wears from the movie. There are a lot of little homages to the movie.

It’s funny because Madeline Stowe came in and played Jennifer’s great-grandmother or something in the past. Obviously she could be my sister, but she played like a Goines, right? I noticed on set she was watching me, so I asked Terry, “Uh – She’s staring at me, and it’s really weird.” 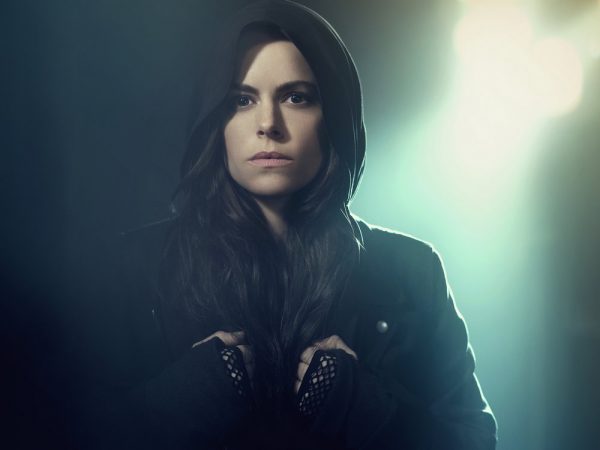 TIBS: That’s pretty funny! Yeah, it’s an iconic role for him. So, you just kind of rolled into it without any of the baggage of needing to live up to anything?

Emily Hampshire: I was blissfully ignorant at the time and then once I became aware of what big shoes I was stepping into, I kind of got scared. I’m glad that I didn’t know that at the time because I think I might have been scared to create my own thing. I’m glad I did because then you can’t really compare. I think we’re both Goinses and we share similar DNA, but we are separate people.

TIBS: Speaking of Jennifer, I think out of all the main characters, she’s probably been through the most, but they’ve been mostly battles with her own self. Along the way we’ve met lots of different variations of Jennifer, depending on which span of episodes here you’re watching. My favorite Jennifer is Hyena Jennifer. She’s a super confident Jennifer.

TIBS: Do you have a favorite Jennifer?

Emily Hampshire: I do. My favorite Jennifer is French Jennifer of last season in episode 302 (“Guardians”). Just purely because it got to be about so many of my own personal fantasies in that episode. I got to speak French, I got to wear those costumes…

The thing that made me want to be an actress is when I saw Les Mis, I was obsessed with Éponine. She had that hat that I wear in that 1920’s episode. I got to be very involved in Jennifer’s costumes. One of my favorite things to do, before we do an episode, I always think of Jennifer, as if she feels that she was in a movie about that certain time period. So, when she takes on these parts, she’s like, “What costume do I wear?” On this poster of “The Kid” with Charlie Chaplin, if you look at that poster, the Kid (Jackie Coogan) is wearing these overalls. It’s exactly what Jennifer wears, which are overalls, like some artful dodger character, which is my dream.

Then, I got to do the plays! It was the greatest thing seeing all the crew in their individual departments get to play Jennifer for an episode because they were doing my play as Jennifer would have made it. Right now, I’m in my apartment and I am looking at the ET doll that was in my basket. I have all my movie posters, like the French Aliens. It was just such a special episode to me. That’s my favorite Jennifer.

Also, because I feel like she came into her own in those five years that she was away. Cole comes back and she’s changed, but Cole is still treating her like this lackey and using her in a way. It wasn’t like he was looking for her, but he came back when he needed her and didn’t care. So, she stands up for herself. She realizes that she’s been on her own for five years and she’s stronger than I think she thought. I also always envisioned, like how in her play she talks about being the goddess of time, she became a more powerful goddess of time in her own life. So, that one’s my favorite.

TIBS: I can see that. She’s like Jennifer unchecked because she has nothing to lose. 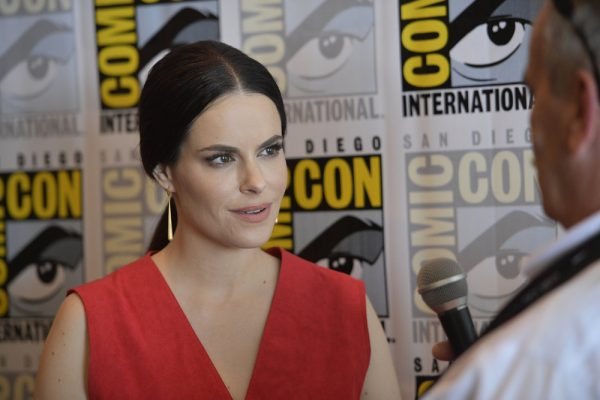 Emily Hampshire: Well, that’s really interesting. We leave it off last season where Athan’s like, “You are the greatest of them all. You will have the keys to everything.” So, we set it up where Jennifer has to go off on her own and fulfill this kind of prophecy of saving the world, which is a lot of pressure. What we find out is that, in that way that Dorothy would find that the power was always within her in the Wizard of Oz, Jennifer will come to realize that the “crazy” that is in her, is actually the key to everything. It was ultimately not “crazy”, which I always felt from the beginning. I mean, I had to play her. A crazy person doesn’t think they are necessarily crazy. They have their own logic and to me, Jennifer was always just a truth teller. The barometer of truth in the room that no one would speak. I think she’s come into her own in this final season. Terry Matalas manages to top everything. Every season, I’m always like, “I don’t think I can do Jennifer again because it will never be as good as this past season.” Like, “You can’t top ‘99 Luftballons‘, or in the season before, you can’t top young Jennifer meeting old Jennifer and ‘Hello egg, I’m chicken.'”

This season, people have been asking, “Is there another musical number in there?” It’s something that I cannot believe is actually better than “99 Luftballons“.

TIBS: I have the first six screeners and now I’m going to have to go race through those and see what you’re talking about. 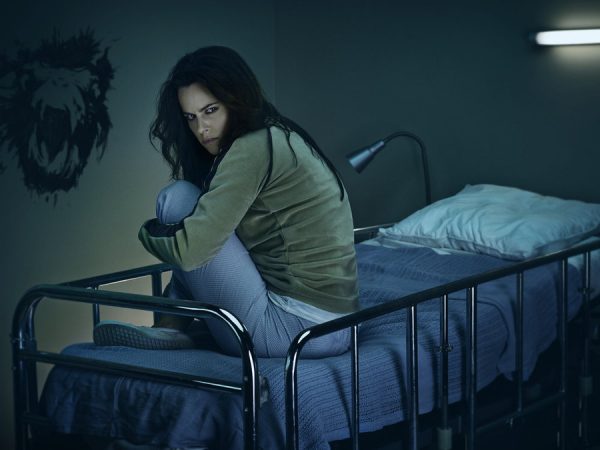 TIBS: So, you brought up Athan. Now, in my mind Jennifer & Athan had a lot of time together…

TIBS: I like to think that they had some possibly romantic time together. Is there any truth to that?

Emily Hampshire: That’s so interesting because someone else asked me that too. I always saw them as twins separated at birth, like brother and sister.

Emily Hampshire: I find it really weird with any character I play or even life (I’m embarrassed to say) that my first thought is always a somewhat sexual one. Somewhat like, “‘Who is she interested in?’ and ‘What did they do?'” and all those things. With Jennifer there’s always been this weird block. Like, it always seemed just so wrong! Even when people were talking about Jennifer and Cole, I just saw her a child a lot of the time. So, I think she’d totally be in to some guy, just like an animal playing with its food. But I can never for some reason see Jennifer in an actual, real, romantic love relationship, as much as she wants that from the movies she’s seen. I think that’s what she initially was so in love with in Cole. Here’s the person who believed in me and was my prince charming. But I think there’s something still so stunted in her that remains kind of a child who’s looking for a family, more than she’s looking for a partner.

It’s interesting, because Terry had said to me early on, “There’s always talk every season like, ‘Will Jennifer have a life-partner has or will she be a lesbian? Will she get together with this person…'”  Everyone at the end ultimately is a little like,” Ooh, no.” Yeah. So I think they’re the same page as me. I just can’t picture it. I think she’s just not mature enough brain-wise to understand a romantic relationship beyond the weird stuff.

Emily Hampshire: No. She would have wanted to. I think when it came down to it, things that have happened would have made that crazy. I think we all have the fantasy of true love. It’s kinda like, I don’t know if you’ve ever read that book, The Five Love Languages? It’s about how we give and receive love and how it’s different to different people. Some people receive it through physical touch and some people through words. I think with Jennifer, she might think she wants love in the way of a romantic relationship, but how she actually receives love is, weirdly enough, in giving. On the surface it seems that Jennifer is really needy of love. But if you chart it, all she ever wants to do is help and love Cole and be part of part of a family. So, I think that’s ultimately when she feels the most loved and part of something that is much more of a family for her.

Emily Hampshire: Yes! Totally! The Daughters and the Hyenas! Yes! Absolutely. And then even when it was wrong with Olivia, she went toward Olivia because it felt like a mother. Even all the stuff with her father was all just ultimately to be loved by her father and not used. With Cassie, once they get over their stuff, it was like having a real friend and a sister.

So, yeah. I love Jennifer so much. I miss playing her, more than more than missing anything in real life. It feels like my bestest friend that I lost.

Emily Hampshire: Yeah. It’s weird because Terry and I were talking about it. The show ending felt right because each character got it’s due. It was the right story storyline and I was fine with ending it. And you know, I’d miss the crew and cast and stuff, but we’d see them and that’s fine. But the thing I feel like rips my heart out, was not being Jennifer anymore. I still feel it.