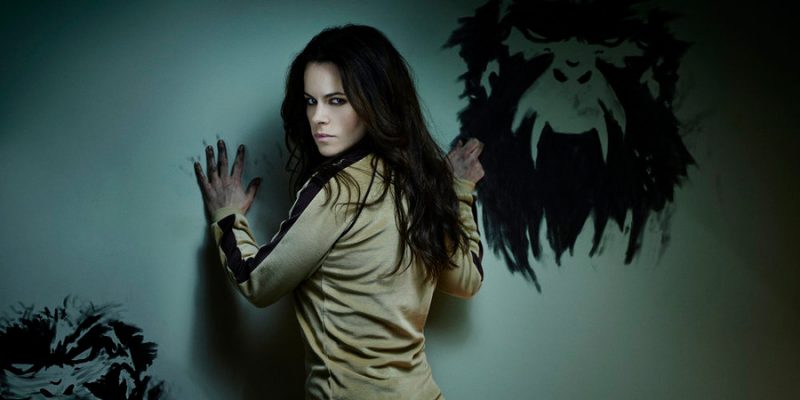 Getting to Know Emily Hampshire Some More

This article is part 2 and a continuation of our Exclusive Interview with 12 Monkeys’ Emily Hampshire. Go back and start with part 1 if you’ve reached this page first.

TIBS: You got to work with Athan, so, you’ve got to work with James Callis. I saw him at a Battlestar Galactica reunion last year and he struck me as the funniest guy in the room, but with this stiff British facade.

Emily Hampshire: Yes! I actually had no idea how funny he was. I knew in real-life he would be funny sometimes, but he was pretty serious. When I saw the episode I was like, “Holy shit. The way he is saying this is hilarious!” He gets his part on another level that I actually didn’t. I thought he was really funny. The kind of funny I like: that dry and you’re-not-quite-sure-if-it’s-a-joke funny.

TIBS: He had this story about his first day on set with Tricia Helfer, having to undo some sort of plastic panties or something on her. He turns to the audience which is full of hundreds of people and deadpans, [Interviewer puts on a British accent] “I don’t know if you’ve ever had to deal with plastic panties, but they’re a handful.”

TIBS: I have some mandatory nerd type questions. Do you have a favorite episode either that you acted in or watched later?

Emily Hampshire: Well, I haven’t seen this entire season and I keep hearing from Terry that the two hour finale is supposedly the best of them all. But I haven’t seen that. I actually haven’t seen any full episodes of this coming season, so I’m only speaking to past episodes. My favorite would be probably episode 302 (Guardians, see first part), just acting-wise. But, as an audience member, I love the loop episode, which I can’t remember which one it is, but it’s when it’s like Groundhog Day. I really liked that episode, I thought it was great. 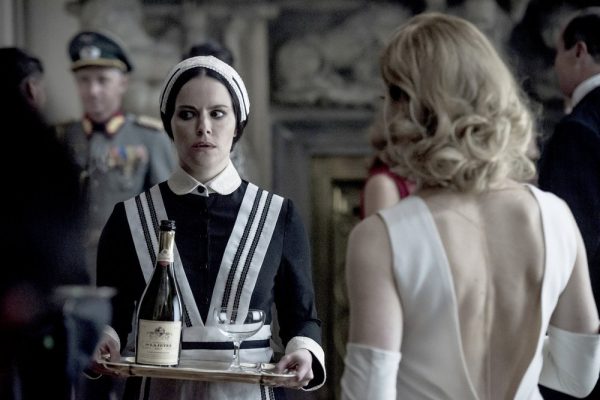 Emily Hampshire: That’s a hard one

TIBS: I would guess you playing yourself in the same shot with old Jennifer….

Emily Hampshire: Yeah, that’s what I was gonna say! I think that that was the hardest, but I hesitated because I think if I went back to it now, it wouldn’t be as hard. But no, actually it definitely was, especially because I play old Jennifer so infrequently. I remember feeling as I was dying as old Jennifer, that I finally figured out how to play old Jennifer. It was definitely just technically a new thing for me.

I did get some great advice. I called Tatiana  Maslany to ask her, “Do you have any advice? Because I’d never done it before.” We know each other, so she gave me some great advice. Also her double, who does all her characters with her on Orphan Black, came and was my double. She was amazing. She said anytime I have to play myself with myself, she will come and be the other Jennifer.

TIBS: Wow. Yeah, if there’s a double out there that would know exactly how to do it, it would be her.

Emily Hampshire: Yeah, I have a lot of stuff. I have the ET. I’m looking at him right now. I got all my posters framed and then I got the little alien that comes out…  the chest-burster alien? I have a lot of stuff, but it’s nothing compared to Terry (Matalas), who took home the chair. Terry has the Time Machine Chair in his garage with his 2 DeLoreans. And he has the Witness whole outfit and mask… If you Facetime Terry, in his office, behind him is the Witness. I always tell him, “I can’t have this conversation with the Witness staring at me!” It’s crazy.

TIBS: So he’s got three machines at home?

Emily Hampshire: Yes! Three time machines. You’re so right. I never thought of it that way. But yup! [laughs]

TIBS: Can you talk about Schitt’s Creek a little bit?

Emily Hampshire: Sure. I’m currently in the middle of it and we have two more days left in this season, which has been the most epic season ever. I cannot wait to be able to tell people what we’re doing this season. But ultimately. I can say this really is Stevie’s (Emily’s character, Stevie Budd) year, so I’m just really excited about it.

TIBS: My wife and I are sort of like Schitt’s creek recruiters. We go watch the whole thing as soon as it’s available and we tell everybody we know, “Have you ever heard of this show Schitt’s Creek?” and we try to pull people in as best as we can.

Emily Hampshire: Great! Last year, because we decided to do a fourth season, I had episodes back to back on 12 Monkeys. I ended up having to shoot Schitt’s and Monkeys at the exact same time. So, I would do Schitt’s Creek during the day, then I would be driven to a night shoot on 12 Monkeys. Then from that night shoot, would be taken back to Schitt’s the next morning. I’d sleep in cars. Terry told me on Back to the Future, Michael J. Fox supposedly had to do the same thing. I actually felt like maybe the best ever doing that, because I was just nonstop. I mean, I got very sick after, but while I was doing that insanity, I felt like a superhero. Everyone was so nice. I’d go to Schitt’s in the morning and they’d have my trailer set up and the AD would come and be like, “You have 5 minutes, get some sleep.” And she would tuck me in. Everyone was just so nice to me, it was great!

TIBS: I imagine that the set for 12 Monkeys and Schitt’s Creek are completely different.

Emily Hampshire: Oh yeah. I mean, just work-wise, Schitt’s is a half-hour show. It’s very family-like with the crew and cast. We have a different kind of director. On 12 Monkeys, you’re working average 16, 18 hour days, in the dark, in the studio. We didn’t have the budget for how epic the show is, so these people work non-stop to do amazing work on a lower budget. So yeah, 12 Monkeys is definitely the harder job. Schitt’s Creek is like going to camp and being like, “I can’t believe I get paid for this.” With 12 Monkeys, I feel so grateful for the opportunity to do all that. But I’ve never worked so hard in my life.

TIBS: What my wife and I love about Stevie is her ability to call the Roses out on their BS.

Emily Hampshire: Right? That’s what Stevie and Jennifer both need. They are just being the barometer of truth.

TIBS: Is that what you like most about playing Stevie? Her barometer of truthiness?

Emily Hampshire: I’m going put it like: She’s so grounded and down to earth and has a quiet confidence that just says things like they are. I think that’s really special. Especially since I live in LA normally. We don’t get someone like Stevie there as much.

TIBS: Did you know the Levys, growing up or something? Because it seems like a very family oriented production.

Emily Hampshire: No! Not at all.

Emily Hampshire: Yeah. I auditioned. The only person I knew was, I’d done a movie with Catherine (O’hara) before, so I knew her, but that was, that was it. Yeah, it was a total audition.

TIBS: That must be the funniest place in the world whenever you are at work.

Emily Hampshire: Weirdly, it’s the nicest place in the world. If you ever meet Catherine and Eugene (Levy), you will realize that they’re just the nicest people to a fault. You will feel like a Diva if somebody offered you coffee and you accept it because if someone offers them coffee they would be like, “No, I’ll get the coffee!” And they would get coffee for everyone. They are those people. They are very Canadian.

Emily Hampshire: So, we have the nicest set in the world. We laugh a lot on Monkeys. Even though on Schitt’s what we do is super fun and we’re always laughing, surprisingly Monkeys is a lot more. I realized we laugh more in Monkeys because they are so needed.

TIBS: I got to talk to you Amanda (Schull) last week. She said she and Aaron were always goofing around with one thing or another. Cat videos or whatever.

Emily Hampshire: Oh, always. Especially because the environment in a dark studio that’s supposed to be the Apocalypse. For 16 hours a day, you’re in the dark, in cement and everything is dirty. It’s really like being in prison, but ultimately like you find your fun in that.

TIBS: I Bet. I was at Comic Con last year, so I saw you guys on the panel, out of character and together. It seems very collegial.

Emily Hampshire: Oh yes, we really like each other. 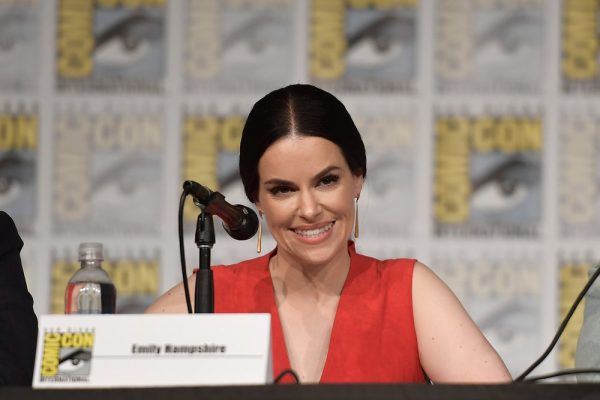 TIBS: Now that 12 Monkeys is all done, you mentioned you’re in Schitt’s Creek now. Is there anything else that we should be looking for you in the future?

Emily Hampshire: I have a movie coming out called the Death and Life of John F Donovan. I’m pretty much the only non-super famous person in it. It’s Natalie Portman, Jacob Tremblay,  Susan Sarandon, Kathy Bates, Kit Harrington… God, the list goes on and on.

TIBS: You got to meet Jon Snow?

Emily Hampshire: Actually, I am Jon Snow’s wife and girlfriend and best friend. That’s the main thing I have in the film because the big ensemble is with Kit.

TIBS: Did you ever get to tell him, “You know nothing,”?

Emily Hampshire: It sucks, because I’m the only person on the planet who’s never seen Game of Thrones, except I’m obsessed with my Bitmoji. At the time, my Bitmoji had a Game of Thrones costume and would say that, so I could send him that all the time. He’s like, “You’re not the first.” He is such a nice guy.